From the Spire: Battlefield Birmingham Day 2 After Action Report 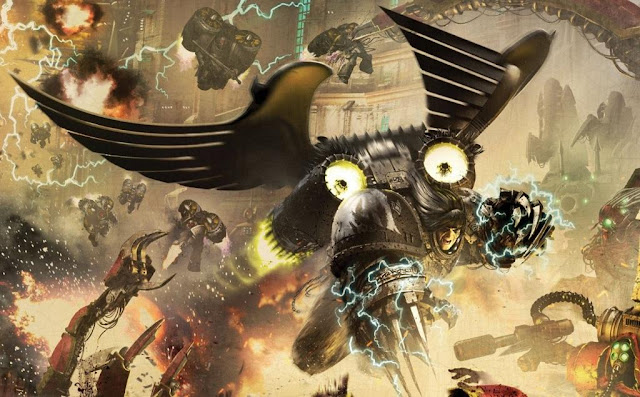 We decided to go for a curry and then back to the air bnb to watch a bit of tv before hitting the sack ready for day 2.

My first game was against an Imperial Fist player, should be fun!

Mike had a more mobile Imperial Fist army than I'm used to seeing which made a nice change. Time dulls the memory slightly but it was something like: 3 Thunderfires, Repulsor, 10 Infiltrators, a bunch of Intercessors, couple of scout units, 4 Aggressors, a host of characters, some suppressors and some inceptors.

I got first turn and mostly just hid. Sniped a couple of Intercessors and tried a cheeky charge on his Phobos Captain with my Infiltrators in the central bunker because I didn't want him moving the captain and shutting down the space available for me to deepstrike into. Sadly they failed their charge and were left standing in the middle of the table in front of Mikes army. Hey ho, at least they got me a maelstrom point for holding an objective!

In Mikes first turn he moved some Intercessors and his Inceptors up to hose down the Infiltrators stuck in the middle of the table and capture the objective. On his left flank his suppressors and a scout unit moved up and shot and charged my Infiltrators which were hiding in the building. A small building for so much muscle mass! He killed a couple of the Infiltrators and lost a couple of scouts in return. 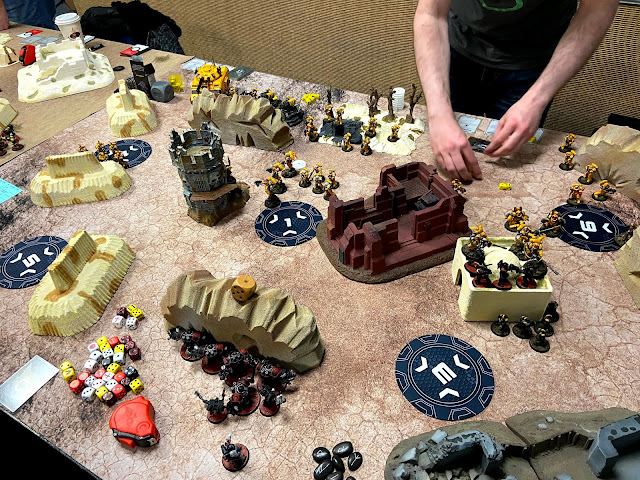 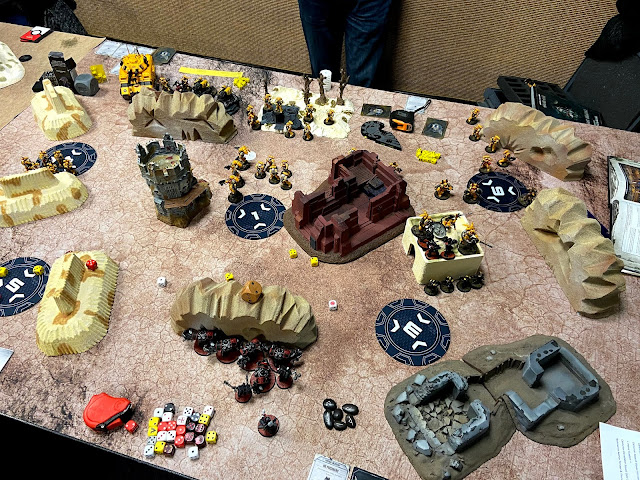 My turn 2 and time for the cavalry to arrive. I felt Mike had overextended a little and that would turn out to be the case.

The chaplain cast his +2' to charges litany and the centrurions in the middle of my deployment zone advanced forwards towards his Inceptors and Intercessors on the central objective. The smash captain advanced towards a couple of his characters, his gravis captain (who also happened to be the warlord) and lieutenant.

This turn was devastating for Mike. By using the advance and charge warlord trait off the captain combined with the +2' charge from the chaplain and the sniping, grav amp on the devastator cents I took out Mikes: 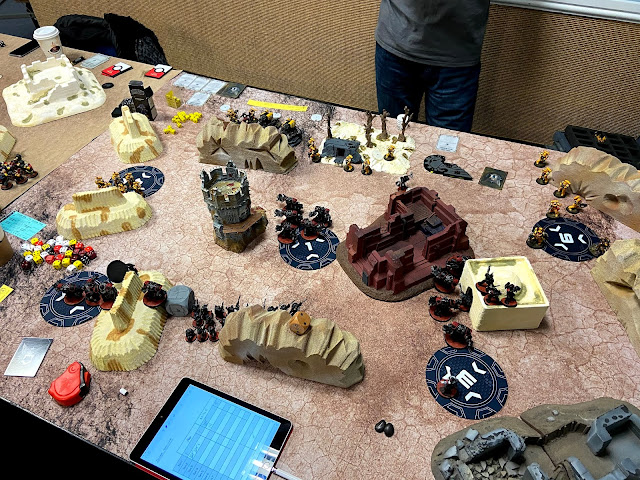 That effectively neutralised Mikes army and gave me control of the board.

The next turn was just about mopping up the remnants and then maxing out on points. I have to say theres something that doesn't feel right about continuing to draw cards and move stuff when your opponent has no models left. There must be a better solution than that... 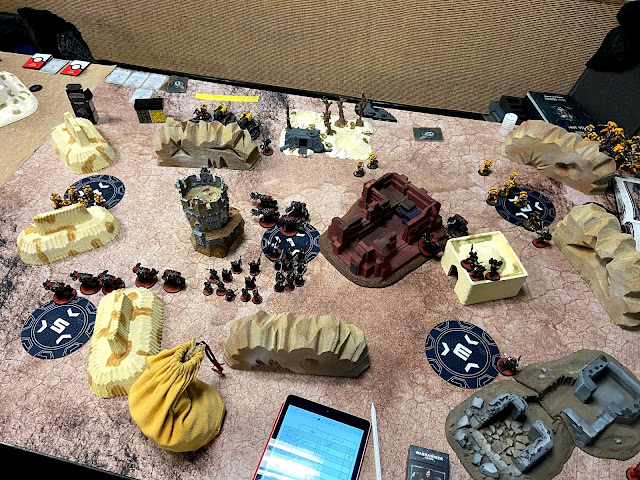 After that result I was sat on 2-2 and drew Paul with his Dark Angels for my last game. Paul was actually on the table next to me when I got demolished by the possessed bomb so he probably thought he'd drawn a right chump for his last game :)

I had no idea what new Dark Angels did only that you can deepstrike terminators really close and shoot a crap load of shots with character landspeeders.

Funnily enough his army consisted of a big unit of the black knight(?) bikers, 3 landspeeders, a big unit of terminators, 2 character speeders, Sammael, some intercessors, some scouts, an apothecary and a chaplain.

Paul won the roll and decided to take first turn.

My deployment consisted of hiding in the ruin in the bottom right of my deployment zone, infiltrators out on each flank hiding. Basically trying to avoid taking a whole bunch of plasma and assault cannons to the face turn 1.

That plan worked so Paul just advanced his army up ready for his terminators to come down and punch me in his next turn. 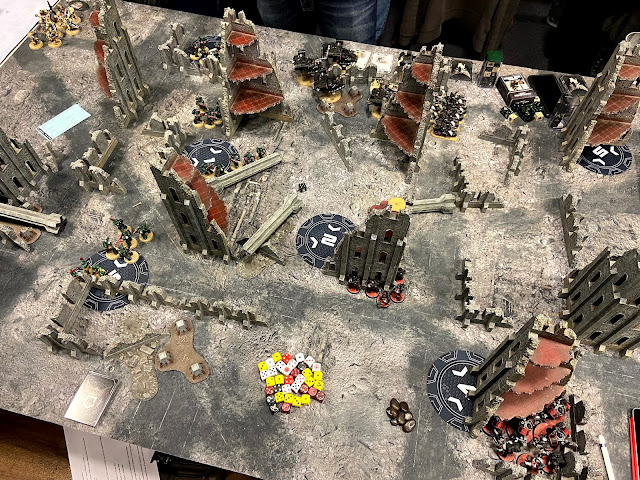 At that point I had 2 options. Sit in the ruin and let Paul push forward on turn 2 with his bikers, drop down the terminators and charge me and batter me. Or jump out of the ruin with the assault cents, try and kill some bikers and at least be able to overwatch the terminators, assuming they didn't have anything janky to strip my overwatch ability.

I plumped for option 1 and so with +1 to wound the closest visible enemy from the chaplain on the cents out we jumped. Well, plodded anyway. 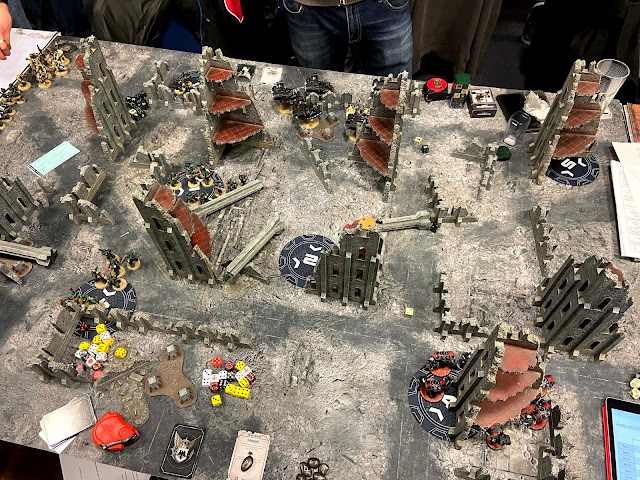 I had literally no idea how tough bikers were to kill and Paul played a strat which made them a bit tougher (I forget what it was now, sorry!).

I don't know whether I got lucky, Paul got unlucky, or whether it was about right but between the assault cents, the thunderfire and the Lt with ex tenebris I killed all the bikers in my shooting phase. I should probably work out the math on that at some point.

In Pauls turn 2 he continued pushing forward and used Sammael to drop the terminators down close to my assault cents. I used auspex scan and killed a terminator and wounded another (woohoo...). At this point Paul had a choice. Shoot up my assault cents with his speeders and risk being out of charge range with the terminators or leave the cents at full strength, take overwatch and charge in. Bit of a rock and a hard place because even with the apothecary there 12d6 flamer hits with +1 to wound (chaplain) and -1Ap (tactical doctrine) plus 72 hurricane bolter shots (albeit hitting on 6's but re-rolling 1's thanks to the captain) would surely have dropped another couple of terminators meaning it would be dicey how many cents he would kill. In the end Paul decided to shoot up my cents and I obviously took off the closest ones leaving him with a 10' charge which he unfortunately failed.

My turn 2 and the cavalry arrived.

The captain came out the ruin and made a beeline for sammael, the chalpain and the character in landspeer. The 2 surviving assault cents moved up towards the terminators, whilst the chaplain with his +2' charge buff sat squarely in the middle of where my reserves would be turning up so the 4 assault cents would be able to charge into the terminators too.

Like last game my turn was pretty effective and took out:

We consolidated into the apothecary with all the cents because I was actually pushed back a bit from the objectives so still had some work to do. 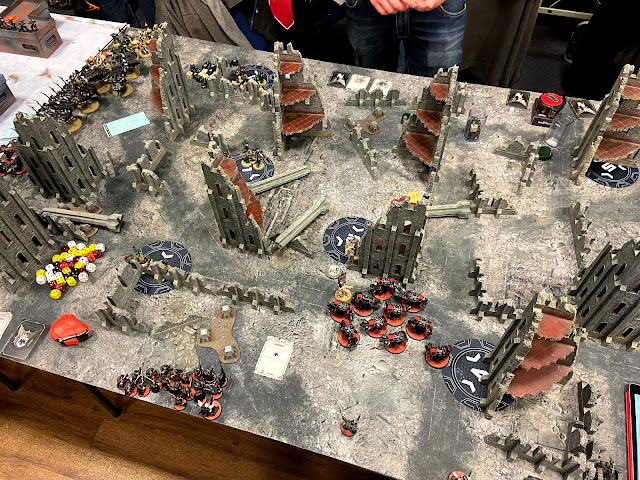 As with the last game Paul didn't really have anything to hit back with so did exactly the right thing, hide and hope for decent cards.

He did get good cards, really good in fact, but the speed of the army with Lias' buff meant I was able to dominate the board and secure all the objectives giving me a fairly comfortable win in the end.

So, after the dust settled I had won 3, lost 2 and was pretty happy having played 5 different armies and got much needed practice in with the army. I placed something like 28th out of about 110 so not too shabby but as ever the event was made by sharing beers and good times with good friends.

With the self isolation it's a good opportunity to get some paint on the army. I've told myself if I can paint one centurion a day then that's good going, given how depressing they are to paint!!