Hey Peeps.
Thought I'd show you how we went about building our Zone Mortalis board.
I liked the look of the Forge World board from the first moment I saw it, but I was unwilling to pay that kind of money for something that might only be used occasionally. I mentally filed it away under 'Future Projects' (I'm sure I'm not the only one who has  a 'future project' list, I have a third of a Daemon army, a third of a Space Wolves army, an old Tyranid and Tau army that are all down to future projects ;-) ) and continued my enjoyment of 5th edition tournament play.
So what changed?
6th edition came along and I realised that I no longer enjoyed 40k as a competitive tournament game. I've invested too much time in 40k and have made too many friends to simply give up on it. So I've gone back to my roots and have concentrated on the hobby side of things like modelling, painting and running campaigns with my old mate Rob.
Our campaign games took on a life of their own and it wasn't long before we started building specific pieces of terrain to enhance our games and help with the story. The Storms of Judgement Campaign moved along and it soon became apparent that we wanted a Zone Mortalis board to fight over.
This is how we set about it.....

The most important part of the Zone Mortalis board is the walls and having the ability to change the layouts in an easy manner. I toyed with using 1" wide wood fastened together to make 'L' shaped pieces but realised that getting them perfectly square would be a tedious process and would it take up a lot of space when not in use. I thought of building fixed 12" x 12" tiles similar to the Forge World boards but again storing the tiles put me off of the idea.
Then I stumbled upon Recalcitrant Daze , an excellent hobby Blog that I've followed for a while now and recommend it to anybody who is interested in the hobby side of things (http://recalcitrantdaze.blogspot.co.uk/).
Rictus who runs the Blog came up with a great solution to the problem of changeable layouts with simple construction and easy storage.....Pillars that allow walls to be placed in them so that any combination of corridors can be built quickly and that store away in a small box when not in use. 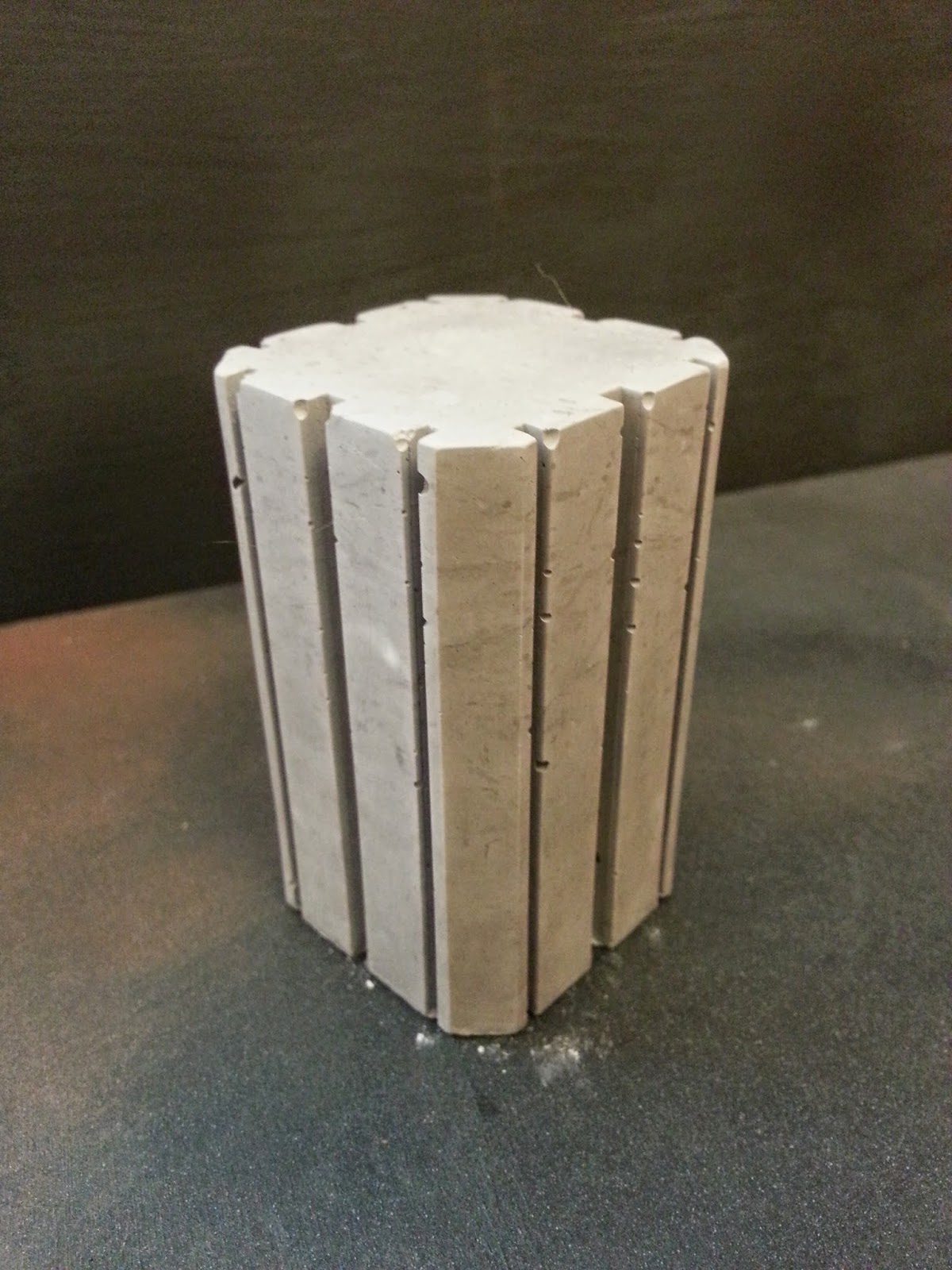 As luck would have it he sells the mould to make these so people can make their own using Plaster of Paris. I emailed him and he was very helpful offering me advice about where to purchase Plaster of Paris and communicating with me frequently about how the mould was coming along. He even checks the mould before sending it to ensure that it is fit for purpose. I'd like to thank Rictus for his service and would recommend his mould without hesitation.
Casting the Pillars
I've never used Plaster of Paris (PoP) before and it turns out that measuring the PoP with the water is quite important. Fortunately the ratio of PoP to water is in the instructions when you purchase it. After carefully measuring it out I looked about the house to find a receptacle that would speed up the measuring process. I discovered that three shot glasses of PoP to one and a third shot glasses of water were perfect for the size of the mould! Here's the tools I used for production. 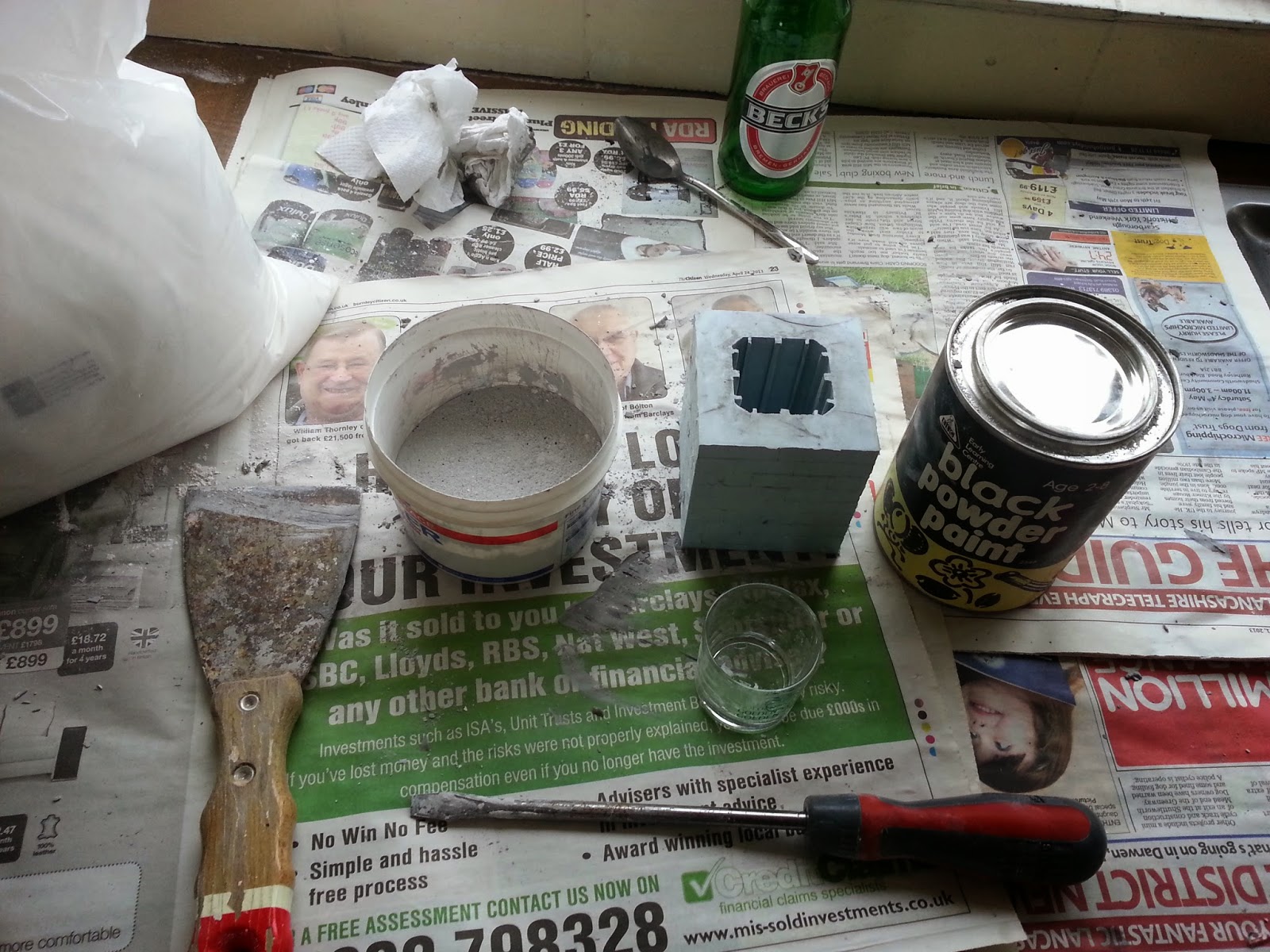 The screwdriver is for mixing purposes only, a simple stick can be used but I found it easy enough to clean the screwdriver up after use. A wallpaper scraper for scrapping off the excess PoP at the top of the mould and scrapping the dregs out of the mixing container (I used an old polyfiller tub as it's easy to tap out the PoP when it has dried).....the beer is optional ;-)
After my first attempt at making a pillar, I realised that it was too white, so I added a third of a teaspoon of black poster paint to tint the mixture. As I progressed I changed how I made them. Instead of mixing the poster paint and PoP and then adding the water I mixed the PoP with water first and then sprinkled the poster paint in and lightly mixed it in to create a marbled effect that I think is more pleasing to the eye. In the photo below the pillar on the left shows it mixed to a uniform colour. The middle and right pillars have had the poster paint mixed in after to create the marbled effect. 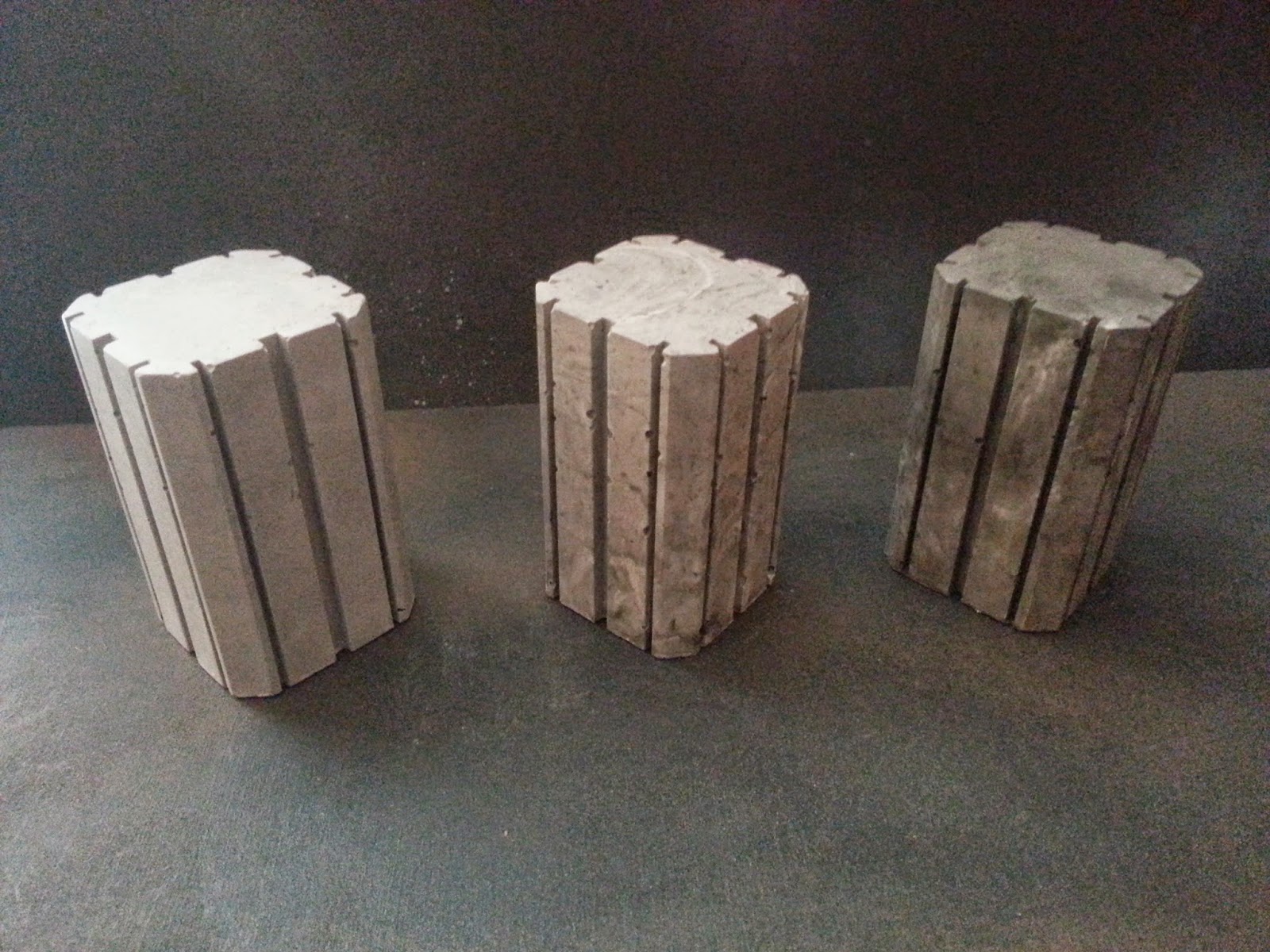 You'll notice that there are tiny air bubbles in the pillars. When pouring the PoP into the mould it's important to gently tap the side of the mould to release these from the mixture. Personally I like to keep some in as I think they add character but it's easy enough to remove all the air bubbles if that is preferable. The main thing is to mix the PoP properly with the water to make sure that there are no lumps of undissolved plaster. If you don't the result is this. 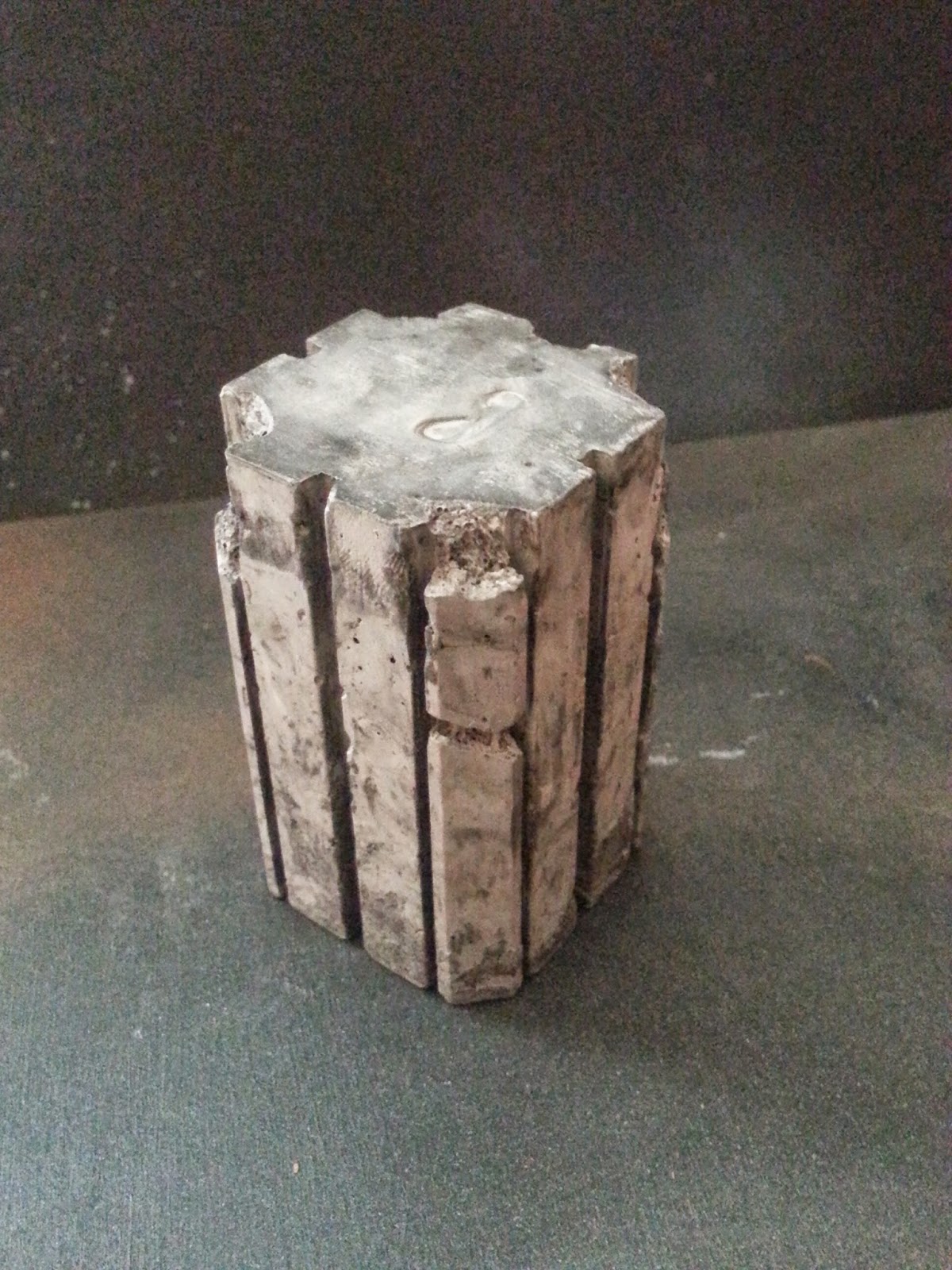 Although it isn't perfect it is still usable and I think it adds more character to the board. I mean c'mon, what's not to love about a pillar that has obviously been heavily damaged by a Krak missile ;-)
The Walls
Making the walls was pretty straight forward and credit goes to Rob for coming up with an easy and effective solution. Rob used some old Art board that he had lying around from his days at college (all hobbiest's are secret hoarders, but Rob has taken this to new heights as it must be nearly twenty years old ;-) ). He then googled 'Spaceship Corridors' and downloaded a suitable image, printed it off and glued it to the art board. After measuring the pillars he scored lines in it so he could bend the art board to form the walls like so: 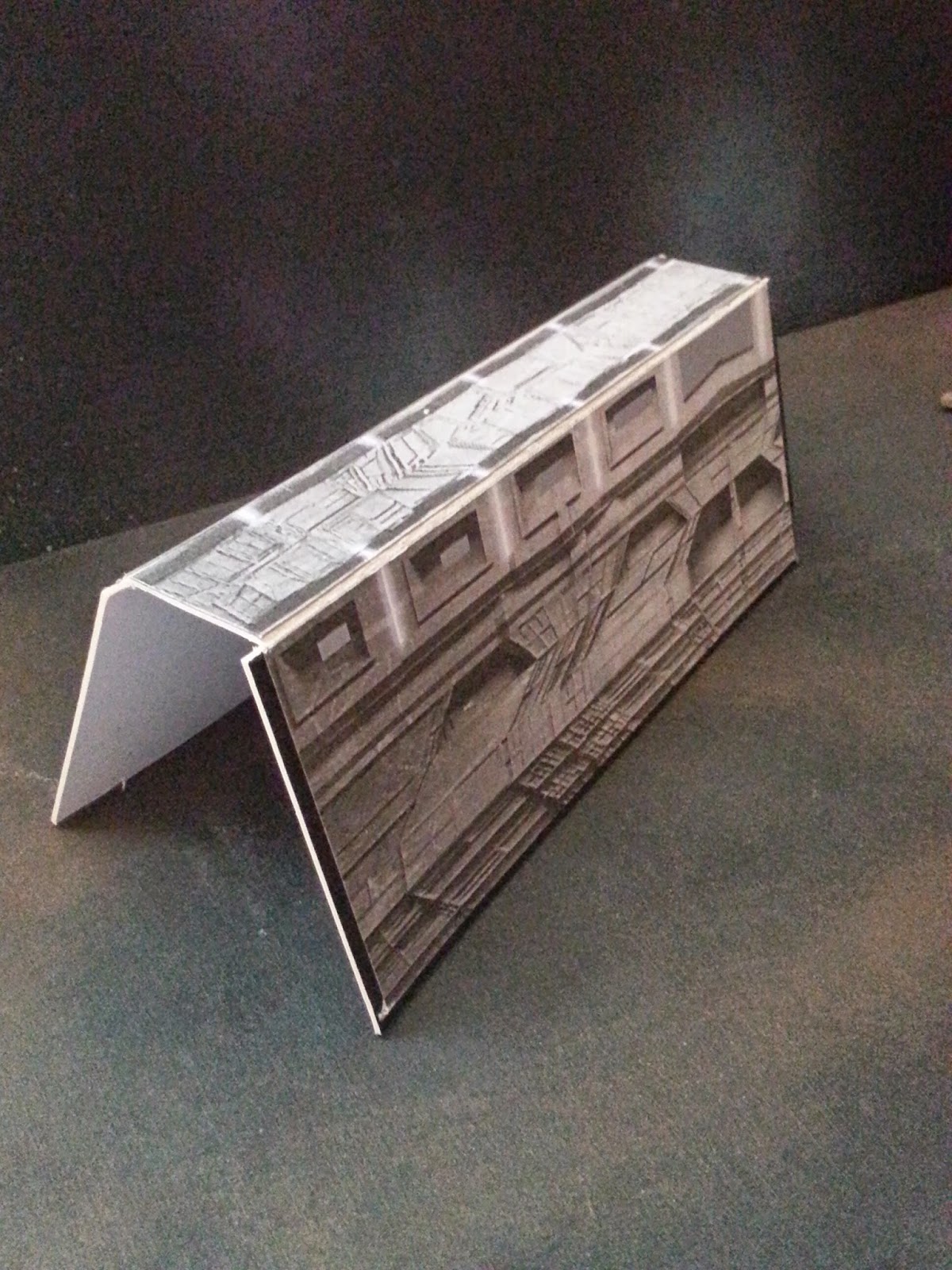 Once that was done, they simply slide into the outer grooves of the pillars. 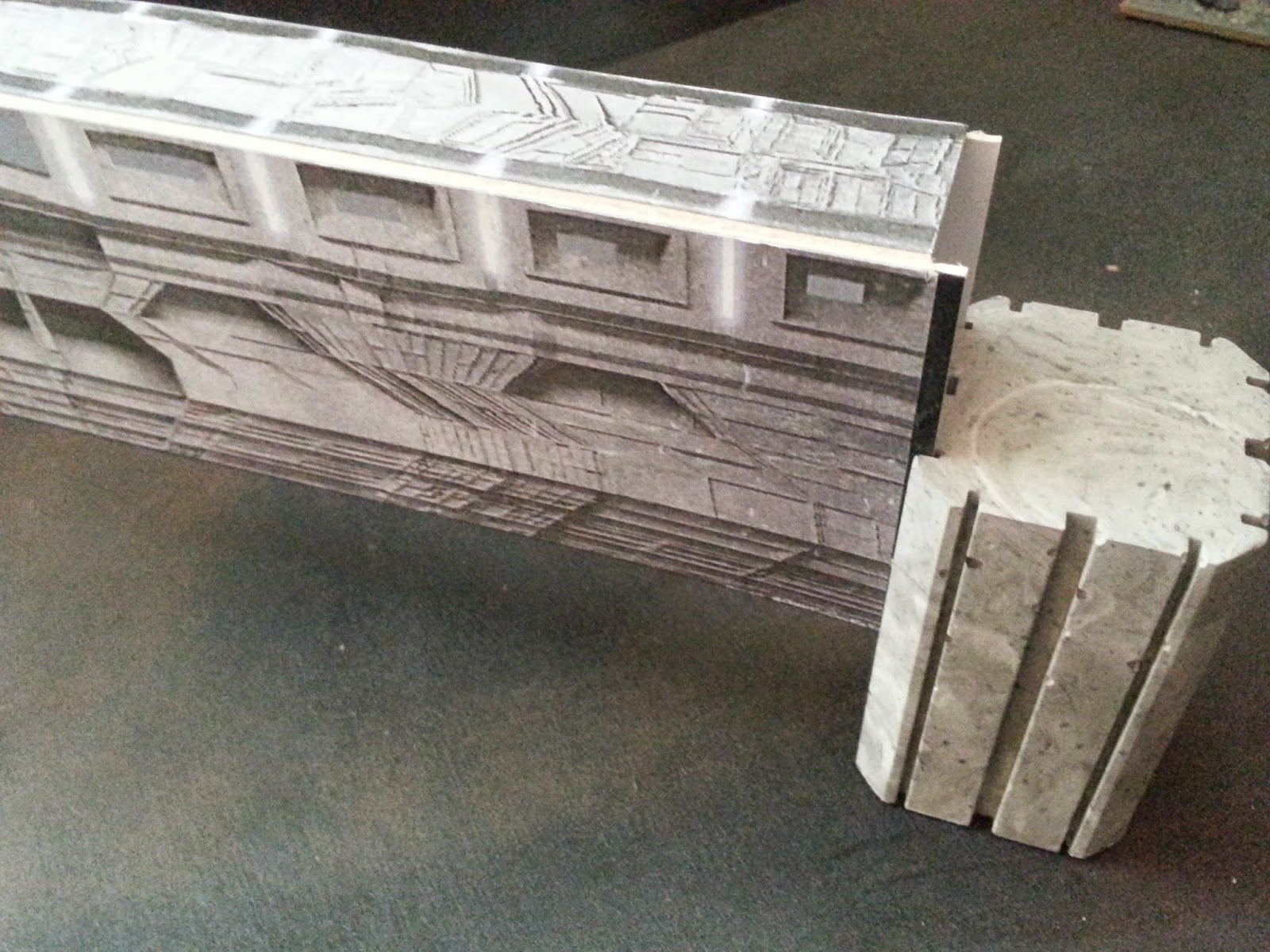 Originally these were made as a stop gap until we had time to add some modelling detail to the walls but we both like the end result, so I think they'll be staying as they are.
The Floor
Because of the way that the board is put together, it is important to have a grid marked out on your playing surface. This facilitates the placing of the pillars and walls, keeping them square and making it quick and easy to alter the layout.
The problem with this was that I didn't want to mark my gaming board with a grid pattern as it would detract from regular games of 40k. The solution was one of those 'Eureka moments' when I'd gone to B&Q (local DIY store) to get some spray paint. They had some window roller blinds on sale for £7. The material they are made from is smooth vinyl on one side and a slightly raised vinyl on the other. 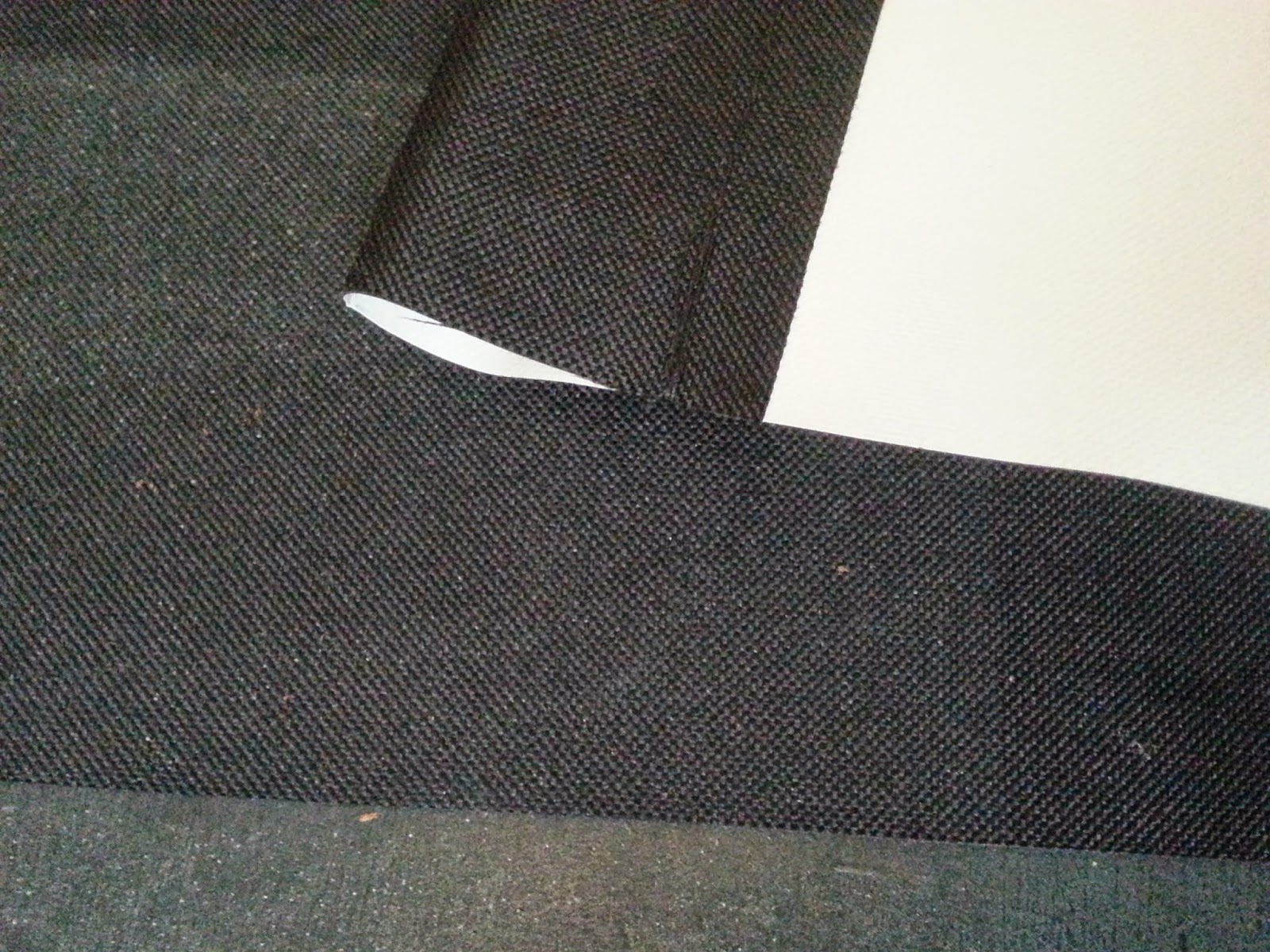 I cut this to the correct length and taped it to my gaming board using masking tape. I then measured out 50mm marks all along the masking tape on all four sides (I'd measured the Zone Mortalis Board at Warhammer World to get the sizes the last time I played down there).
To add a little interest to the surface I used an old piece of mesh that I had acquired from work that I thought might come in handy one day (always the hoarder eh?). 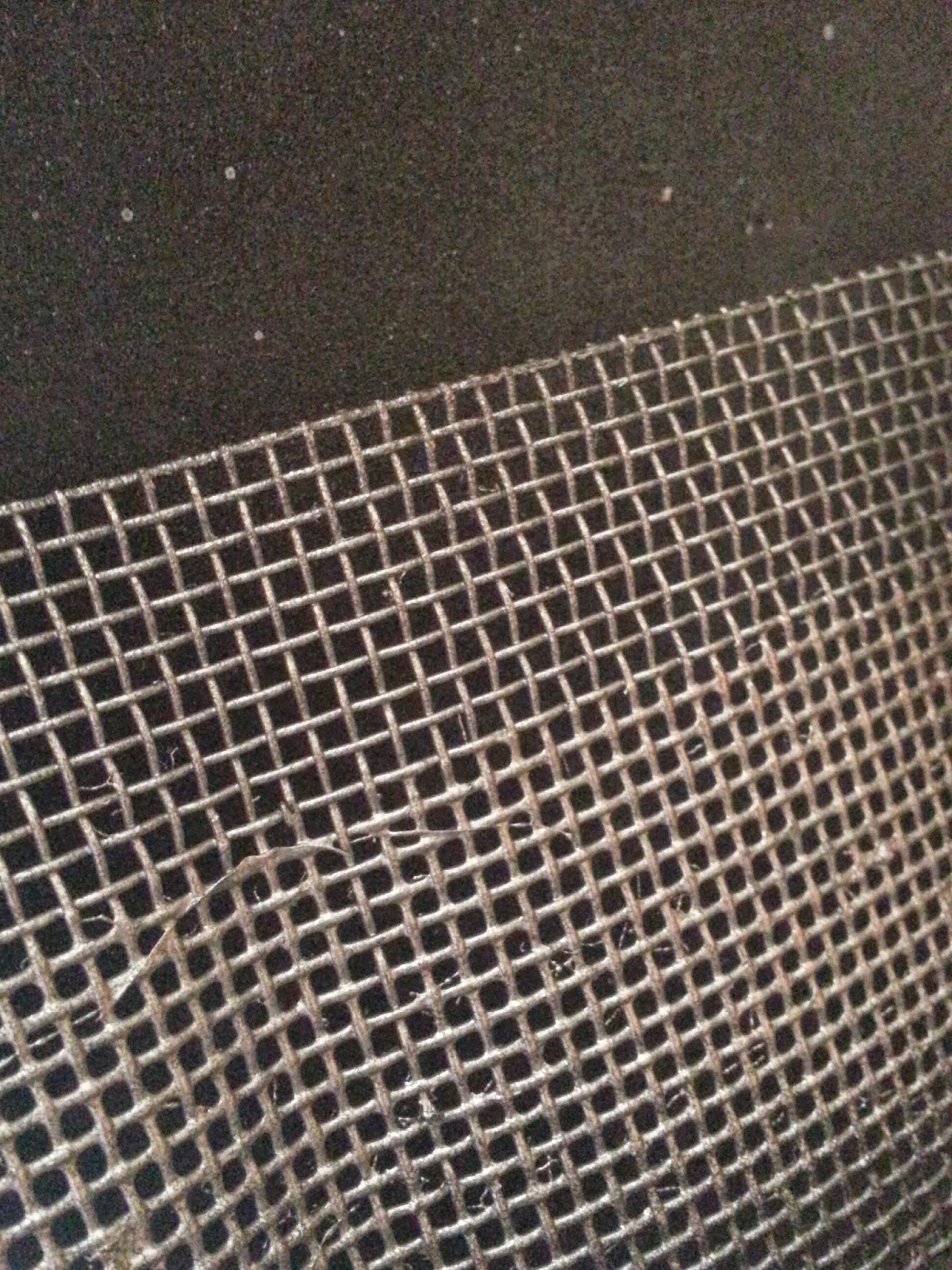 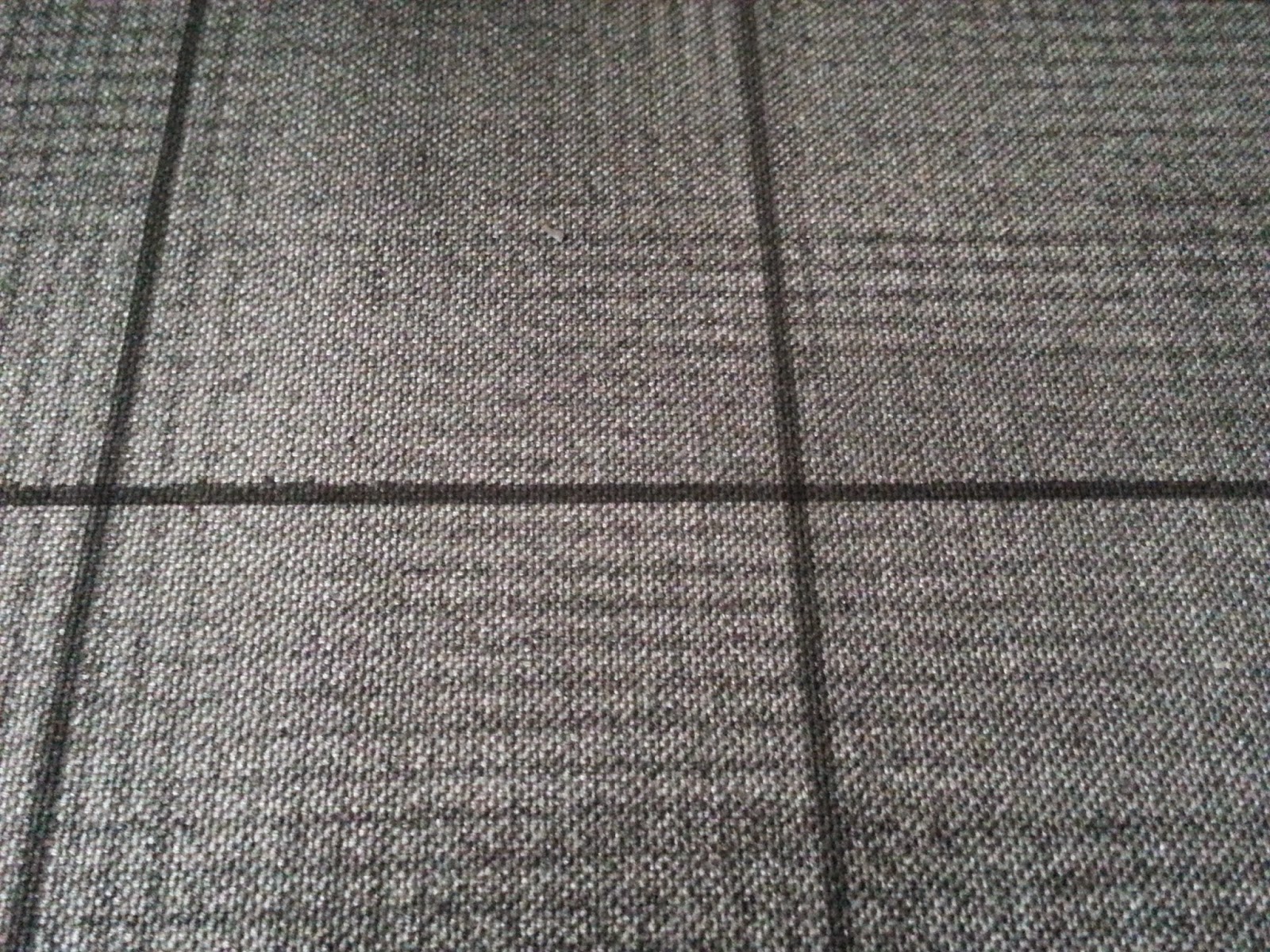 The final result has turned out pretty well I think, sure it isn't in the same league as the exquisite Forge World board but it has only cost a fraction of the price and I had fun making it. 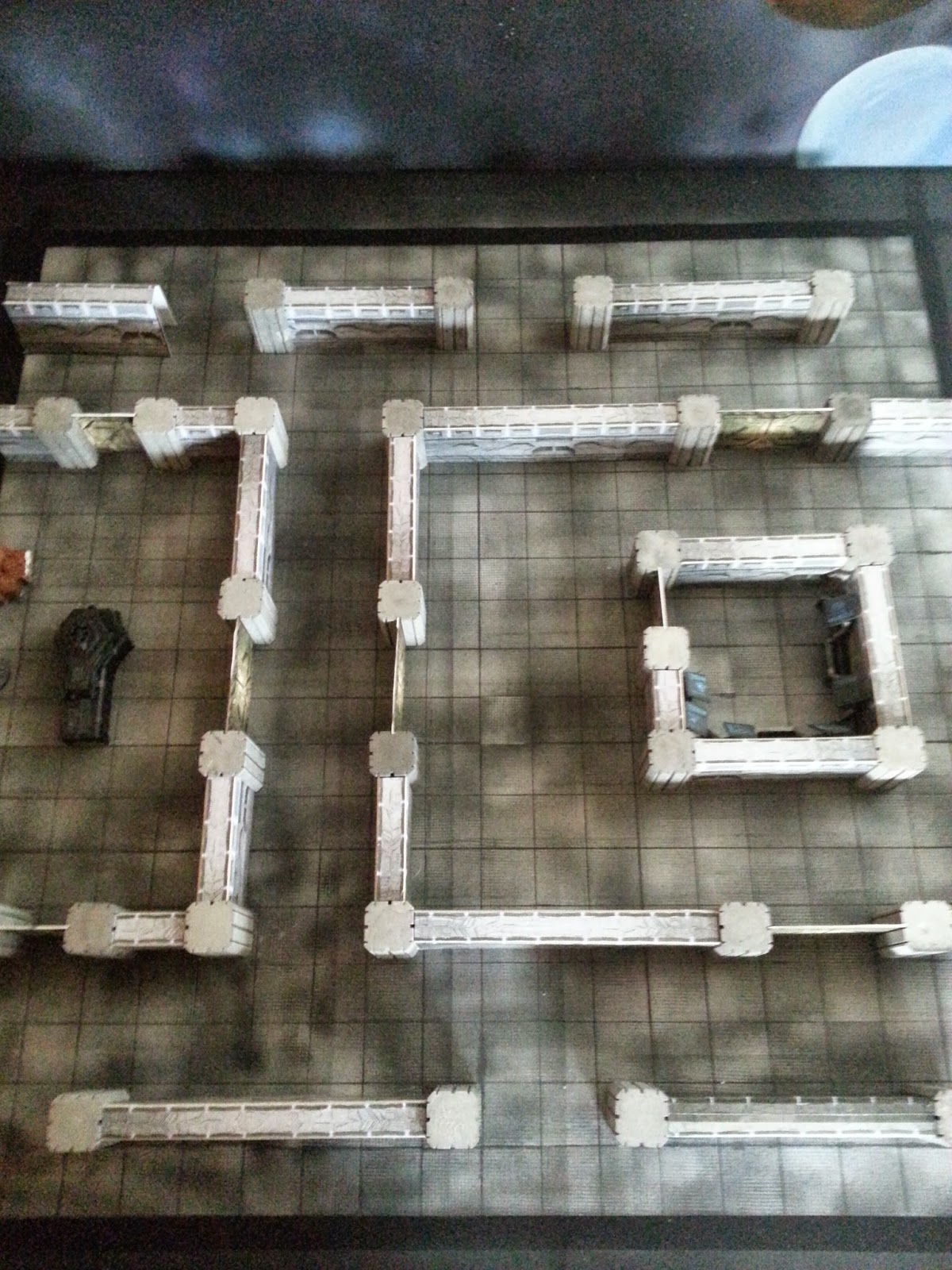 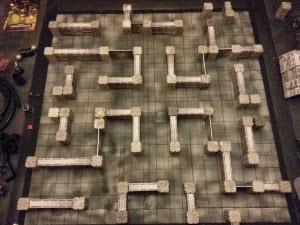 I hope you've found this interesting and that it has given you some ideas to help with your gaming.
Until next time......may Our Lady grant you her number!
Posted by Castigator (Gary) at 01:56