Storms of Judgement - Voidspan fights back

The roaring, thundering presence of the machine-spirit echoed everywhere. Janus slipped through the next layer, and its anger hit him like a tidal wave. It was hot and vibrant, a shocking terrible mass of emotion to come from a machine spirit that had been so quiet for so long. When the Warpsmith had first entered Voidspan's Machine-Spirit he had known it only as a chained storm, its power and the potential energy of its great intellect and knowledge contained in the metal shell of the station. Now it was open and raw, all of its centuries of corruption powering its fury, and its pain. Waves of pure agony hammered off it. Janus forced his mind to conceptualise the machine-spirit as it loomed up from the darkness of the space station's higher systems. The storm clouds were angry red, and they rained blood. Currents of hot, toxic pain flowed around the storm, lashing Janus with black lightning of pain as the machine-spirit raged.
“Tell me!” cried Janus. “Tell me what I must do!”
The emotion that howled on the electronic gale was not human, but it could not be mistaken. Pain, anger and malice mixed into one, battering against the Warpsmith’s mind.
The Station wanted him to die.
Janus wrenched his mind out of the space station's information systems. He snapped back into his body and turned to face Nestor.
“We must hurry my Lord. Defence protocols have re-established themselves, if we don’t reach the inner level to stop it, the outer ring will detach itself and we will be cast adrift.”
As if to emphasise the Warpsmiths point, rivets, the size of a man’s fist tore a section of panel away as the station shook violently.
“Move out!” ordered Nestor.
Read more »
Posted by Castigator (Gary) at 13:25 No comments: 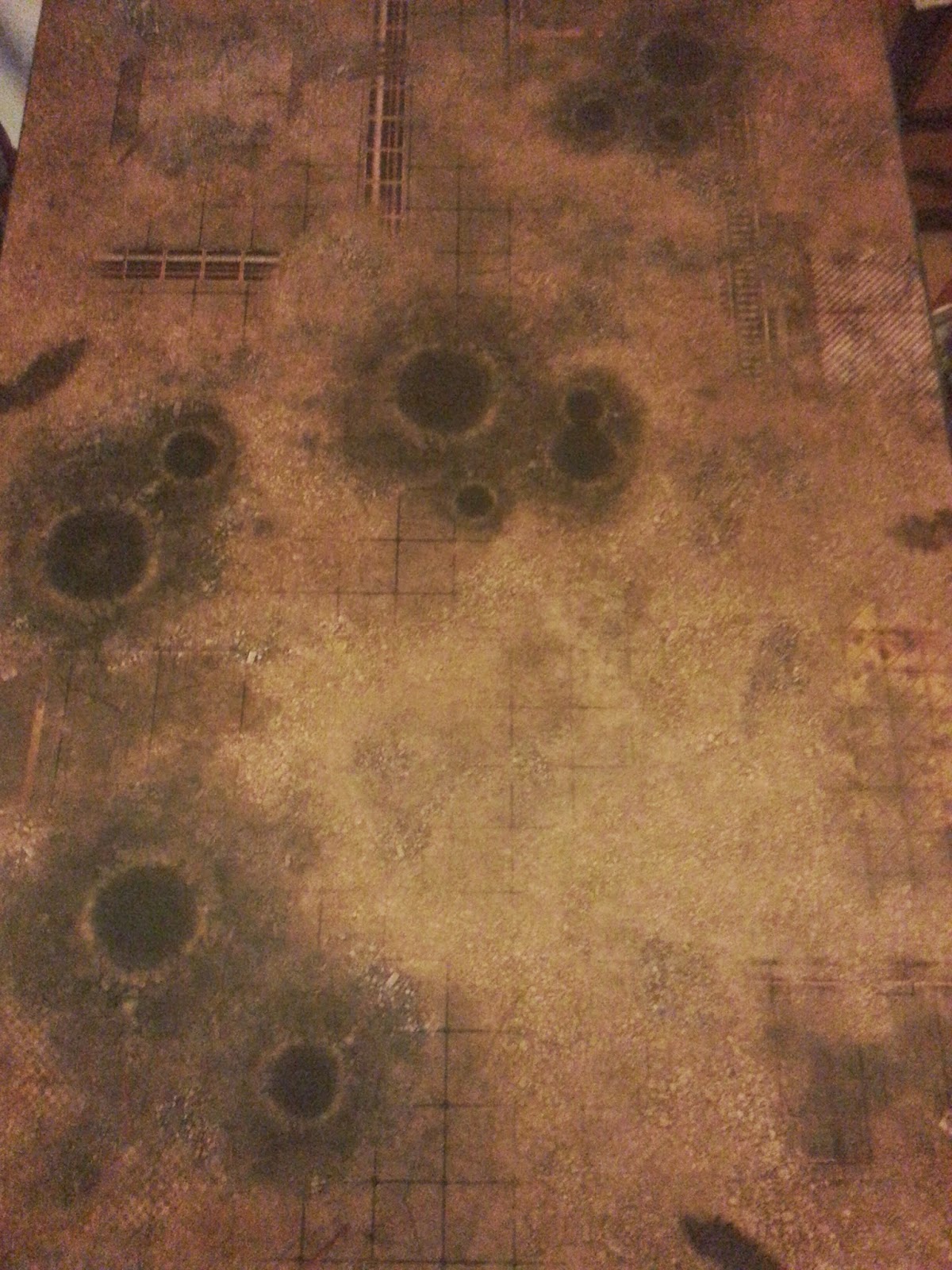 I'd been thinking about getting a game mat for a while. I looked at Frontline's gaming mats and thought they looked great but the shipping costs from America really put me off. Fortunately I came across GAMEMAT.EU who are based in the Czech Republic and, being considerably closer, are also considerably cheaper. 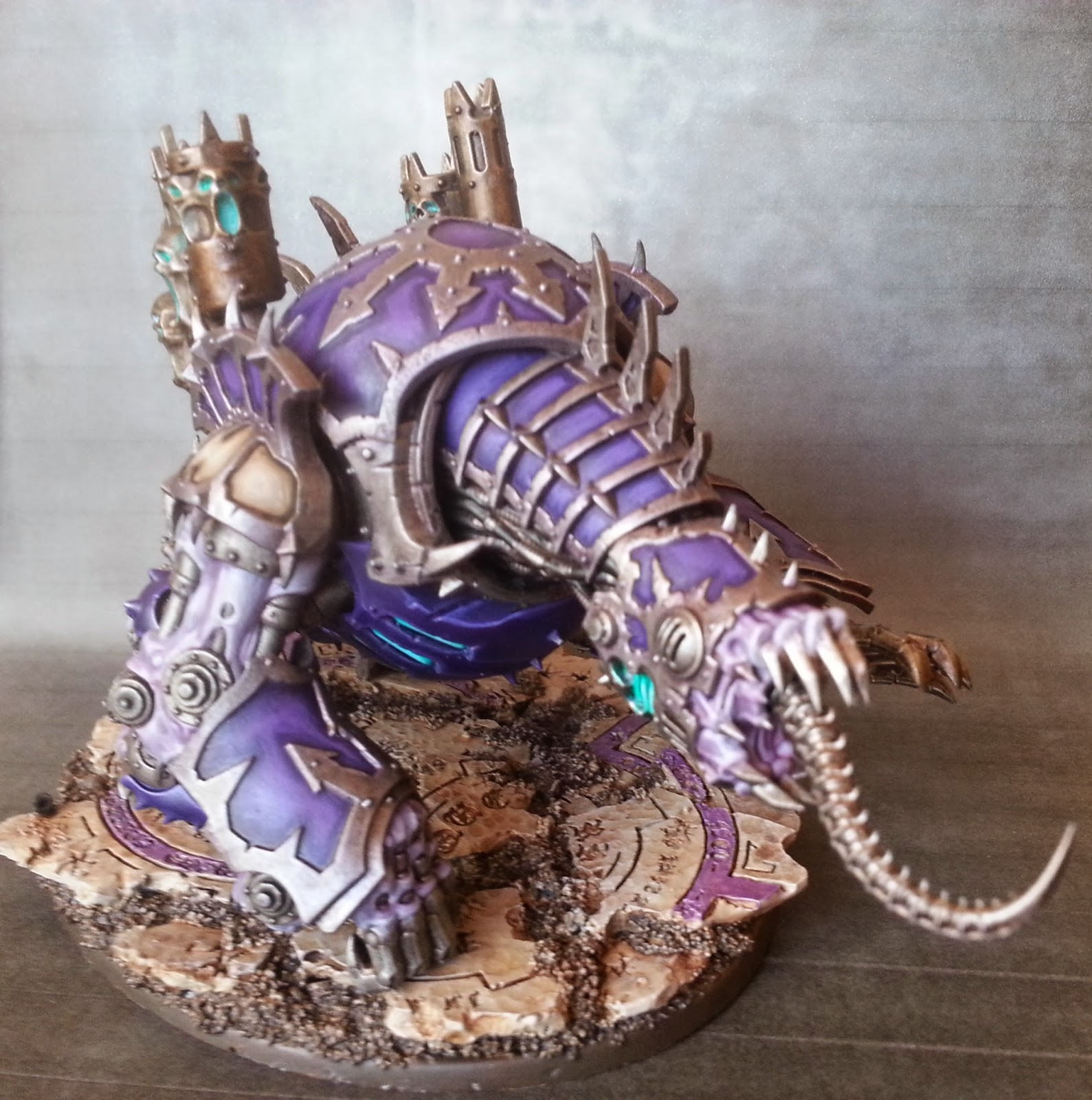 Storms of Judgement - Assault on Voidspan, Forcing the Breach 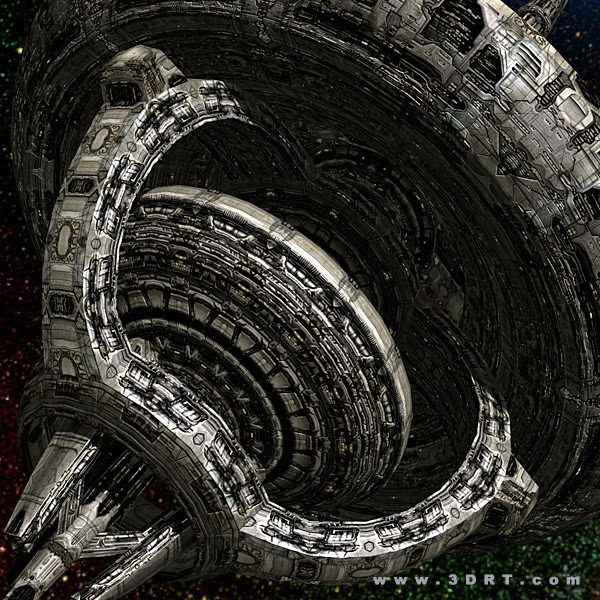 Nestor’s steed writhed with pleasure as the metal floor plates vibrated beneath her. Her squeals of delight added to the sound of groaning metal to create a cacophony of sound that the decadent Noise Marines revelled in.
Shock waves assailed all those in the vicinity as the Castigators’ assault torpedoes slammed into the outer bulkheads of Void Span. Klaxons immediately began bleating their monotone song accompanied by amber flashing hazard beacons as Frag launchers scoured the entry points with lethal shrapnel. The blaring noise faded to silence as the stations interior climate evaporated in a plume of gas into the still, blackness of space.
Unperturbed by the commotion, Nestor’s forces stalked silently like spectres into Void Span’s mortuary corridors, mag-locks on their armour shod feet keeping them grounded in the zero gravity. Blips on Nestor’s auspex marked numerous, as yet un-quantified targets in glowing red. Nestor knew the Death Guard would be closing quickly to seal the breach and repel the invaders for the third time.
“Nephran, take Squad Sublime along with Phobos and secure the east flank. N’kari and his children will take the centre.” Ordered Nestor.
“As it pleases you” replied N’kari.
“Darius, you’re with me.” Continued Nestor as he smashed through the ventilation grill and entered the ducting system.
Read more »
Posted by Castigator (Gary) at 06:03 1 comment:

Hey Peeps.
Thought I'd show you how we went about building our Zone Mortalis board.
I liked the look of the Forge World board from the first moment I saw it, but I was unwilling to pay that kind of money for something that might only be used occasionally. I mentally filed it away under 'Future Projects' (I'm sure I'm not the only one who has  a 'future project' list, I have a third of a Daemon army, a third of a Space Wolves army, an old Tyranid and Tau army that are all down to future projects ;-) ) and continued my enjoyment of 5th edition tournament play.
So what changed?
6th edition came along and I realised that I no longer enjoyed 40k as a competitive tournament game. I've invested too much time in 40k and have made too many friends to simply give up on it. So I've gone back to my roots and have concentrated on the hobby side of things like modelling, painting and running campaigns with my old mate Rob.
Our campaign games took on a life of their own and it wasn't long before we started building specific pieces of terrain to enhance our games and help with the story. The Storms of Judgement Campaign moved along and it soon became apparent that we wanted a Zone Mortalis board to fight over.
This is how we set about it.....
Read more »
Posted by Castigator (Gary) at 01:56 14 comments:

Storms of Judgement - Assault on Voidspan

Nestor silently cursed his impetuousness.
In his haste to hunt down the Corpus Mundi, the Castigators’ Terminators had been left behind at Toil’s End. Only Shaithis, captain of the first Cohort, had one of the precious suits available. Because of this, Nestor had given him responsibility to secure a beachhead on the station.
Shaithis had addressed the War Council with his usual arrogance. His attempts at swaying the War Council to his proposals had all the finesse of a World Eater at a tea party. Whilst amusing at first, Nestor was growing tired of his rhetoric and was beginning to regret his decision to give him overall command of the assault.
Shaithis’ ramblings were interrupted by the arrival of Lucian and Janus. Nestor held a hand up and Shaithis fell silent.
“What news do you bring us Janus?”
“The space station is still invisible to our sensors my Lord. The structure defies all known configurations.” replied the Warpsmith.
“So we’ll be going in blind then. Have you awakened Deimos and Phobos from their slumber?
“I have my Lord; they are already secured on the first wave of Boarding Torpedos.”
Nestor turned to face the Chief Sorceror as he took up his customary position alongside him. “What of our allies Lucian?”
“All is ready my Lord. The ritual is complete and N’kari and his children will join the assault in the second wave.”
“Excellent!” interrupted Shaithis. “Consider the beachhead secure my Lord.”
Shaithis turned to leave the chamber.
“Shaithis!” growled Nestor.
Shaithis turned to face him.
“You have my permission to leave Captain…..and if you do not secure the Beachhead, then see to it that you do not return.”