From the Spire: Battlefield Birmingham Day 1 After Action Report 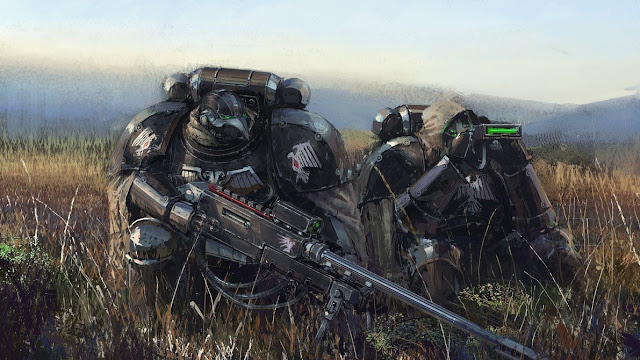 So as promised here are my bat reps from Day 1 of Battlefield Birmingham. I'm going to call this day the clipping of the wings...!

Karl had an Eldar army consisting of pretty much one of each aspect warrior unit, except dark reapers which he had 3 x 3 of. 2 Wave Serpents and 3 units of rangers. A bunch of characters, some on bikes, some on foot.

Karl won the roll off and chose to be the attacker, and hence go first. 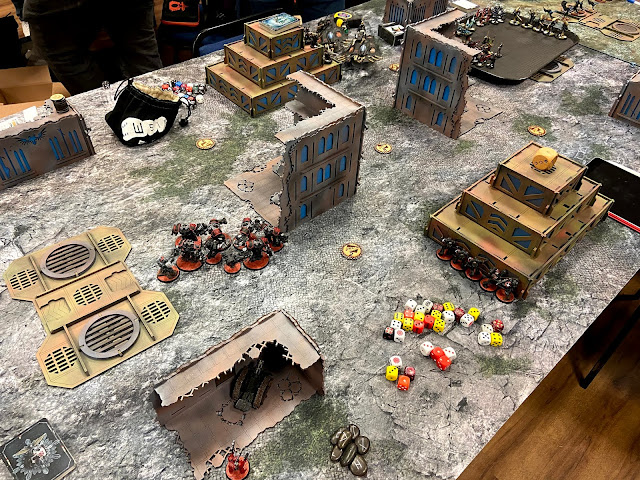 Karl shot up my intercessors leaving one alive and also shot up the infiltrators in the L. He took some pot shots at my cents and did a couple of wounds. 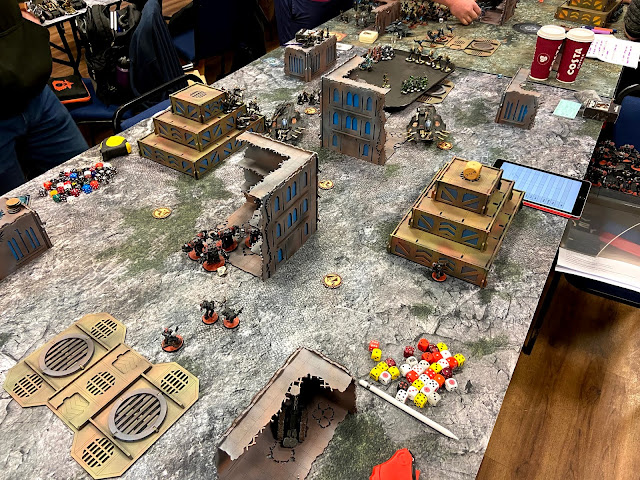 In my turn I advance and charged (with the aid of +2 from the chaplain) into his wave serpent, picking that up and tagging his farseer on bike. His return attacks didn't do anything so I fought again to kill the farseer and tag a unit of dark reapers. Except the cents wiffed and left the farseer on 3 wounds. Oops!

In his second turn he shot essentially everything into the cents and left one alive who kharandras then charged. He took 5 wounds from the overwatch but squeaked in and managed to finish the cent off.

Meanwhile his wraithguard had dropped in and taken out the thunderfire cannon leaving a rather irritated techmarine staring at them. 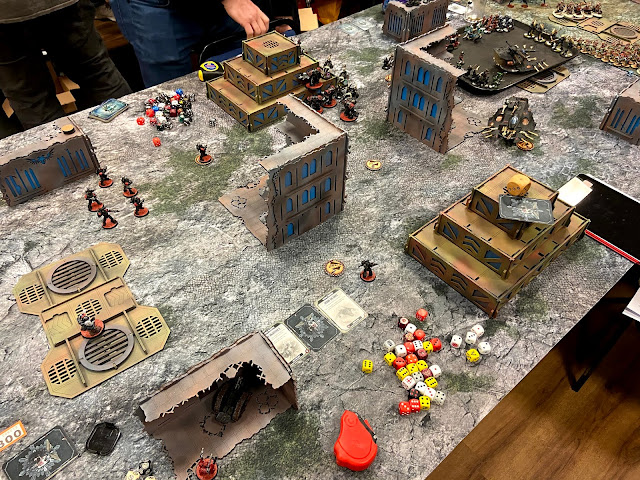 In my turn 2 the cavalry arrived and took out 2 units of rangers, 2 units of dark reapers, 3 characters while the smash captain charged the wraithguard killing them all. 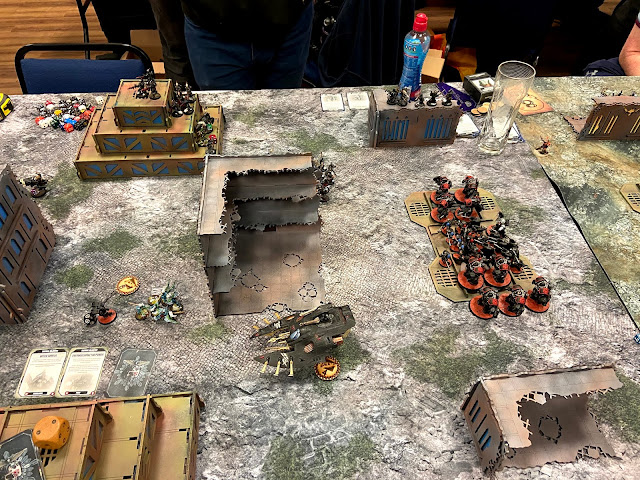 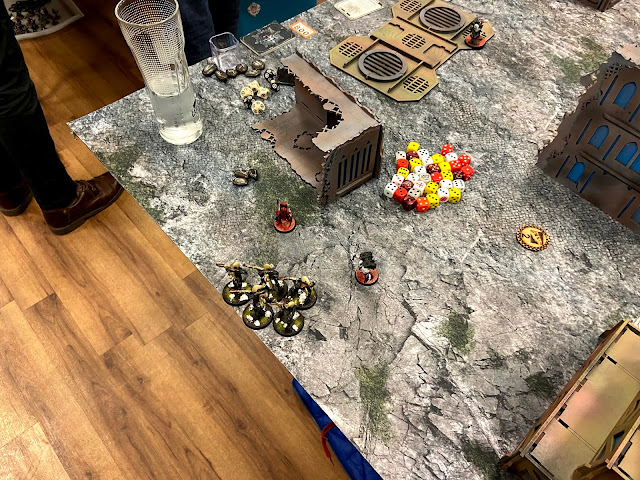 Sadly we then started running out of time and whilst Karl got into my 'brick' of reserves and killed a few of the devastator cents and some scouts I ran out of time to start to claw my way back on top. It didn't help when the smash captain failed an 8' charge on his warlord which not only meant I failed to get warlord and capture objective 6 it meant he could then take out my smash captain with some smite and get warlord himself. A 5pt swing right there.

The other big whoopsie was that Karl clarified with the assistant TO how we scored the d3 maelstrom cards and was advised that we rolled for them. He was rolling 3's and I was rolling 1's.

So combined with running out of time and playing the maelstrom wrong the score didn't really feel like a fair representation of the game.

Nevertheless it was an enjoyable game and a good opportunity to start to learn about Eldar. Though I don't think I will ever get my head around all their psychic powers! :)

After losing quite heavily game 1 I was down near the bottom and paired with Luke and his really well painted daemon army. He had a great unclean one, a funky forgeworld knight, some plague riders, a couple of small units of plague bearers, a unit of nurglings, a blood thirster, a defiler, a daemon prince and a unit of blood letters.

We rolled up and Luke was the attacker and me the defender. This time I rolled up Search & Destroy.

I tried to hide the cents around the crates in my deployment zone, put the intercessors in cover and hid the thunderfire cannon. One unit of infiltrators went in the ruins to my left to protect my left flank against deep strikers and the other hung around the crates with the intention of protecting my right flank and back field against deep striking blood thirsters and bloodletters. 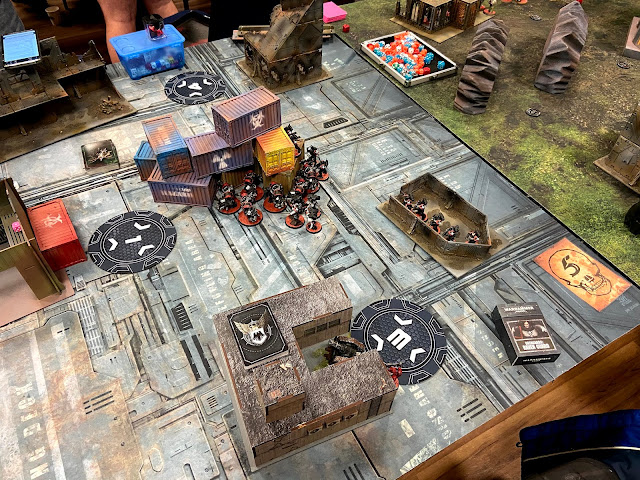 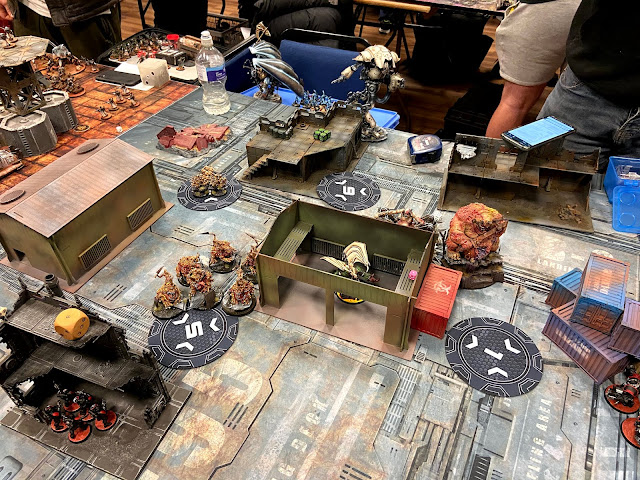 In my turn 1 I figured I had to do something about the great unclean one so slammed the 6, well now 5, cents into him. With a combination of fight twice I dropped him down to 2 or 3 wounds. My infiltrators on the left figured they were either going to be charged and die or do something useful so jumped onto objective 5 to score me some maelstrom points and tighten the no drop zone on my left flank for a turn. 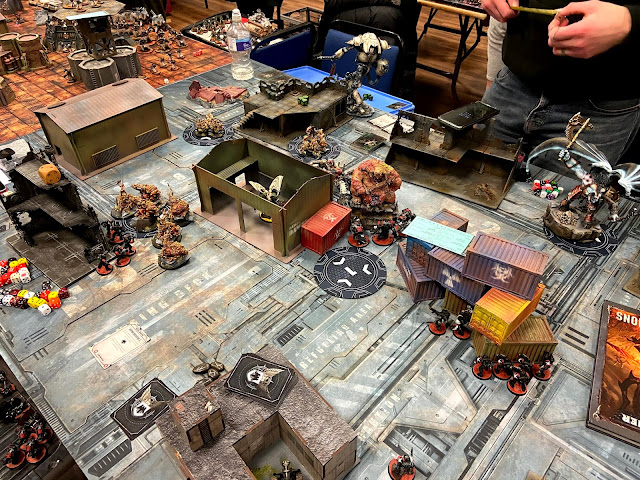 In Lukes turn he moved the defiler over to help out the great unclean one and charged the plague riders into the infiltrators. The blood thirster, devoid of decent drop locations dropped onto an objective to secure some maelstrom points. The unit of blood letters dropped far onto my right flank to try and charge the intercessors but because of the infiltrators on my right side were about 10' away from the intercessors so ended up failing their charge. 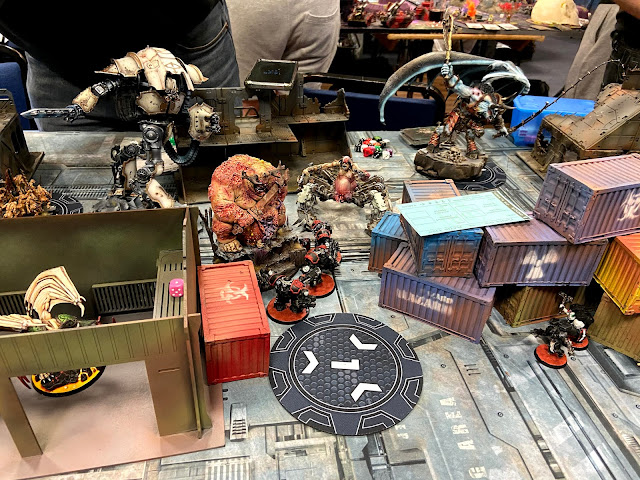 My turn 2 and time for the cavalry to arrive. The surviving infiltrators fell back whilst the smash captain made a beeline for the bloodthirster. The brick dropped as far forward as I could to help with board control in turns 3+.

Shooting was somewhat effective leaving the knight on 3 wounds, killing the daemon prince, plague riders, blood letters and daemon prince. The last cent killed the defiler but the smash captain fluffed his lines a little and after fighting twice left the blood thirster on 2 wounds...nonetheless I was now in a strong position as I'd neutralised pretty much all of Lukes hard hitters. 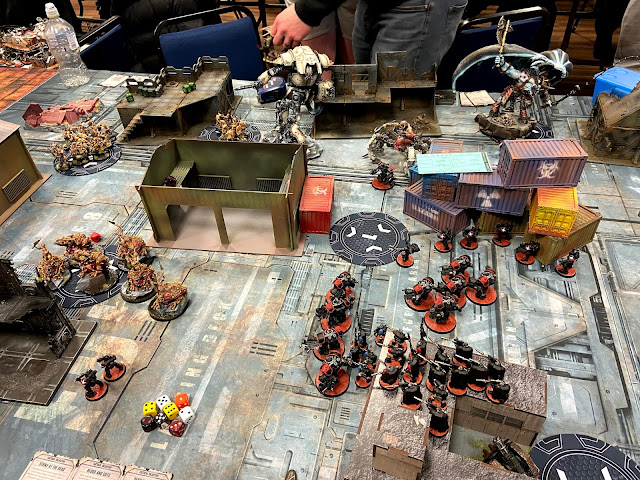 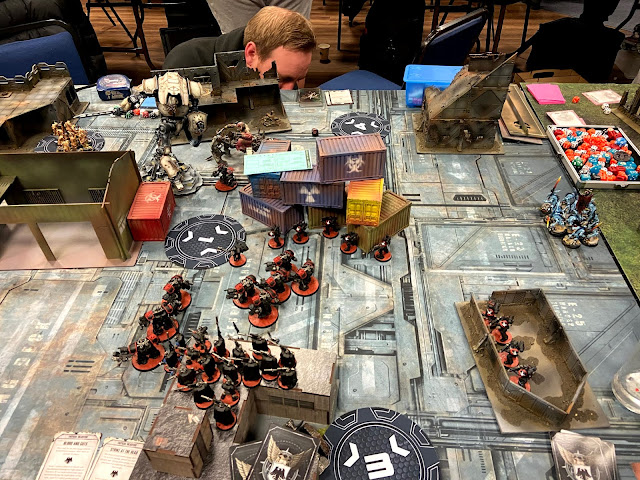 In Luke's turn he attempted a charge on the infiltrators with his Blood Thirster but got taken out on the overwatch by a krak grenade (I love master artisans!). The knight shot and killed the last of the original cents and that was about it.

The remaining turns were all about maximising Lias' movement buffs and mopping up to be honest. The knight was finished off and the a billion hurricane bolters took out the plague bearers whilst I moved onto objectives.

A good fun game and Luke was a gent, he also rightly got nominated for best painted with his lovely looking army. 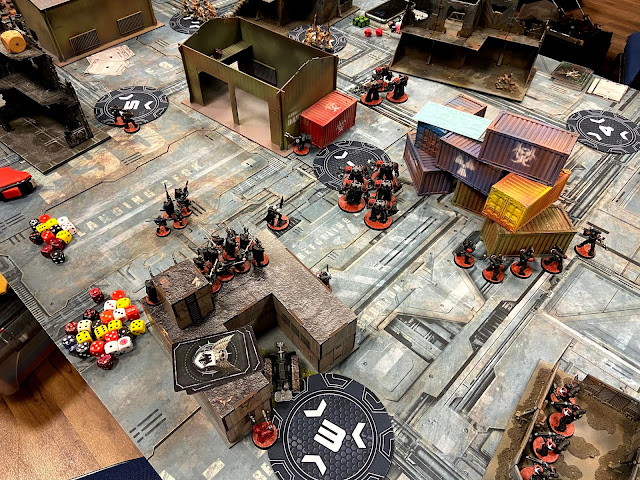 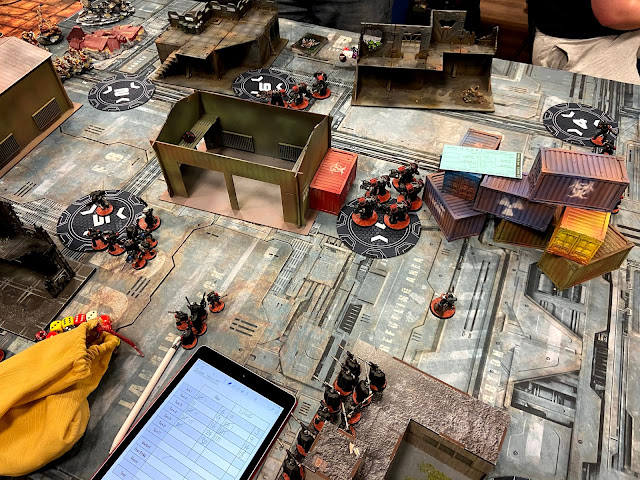 So there's not much to say about this game except it is a lesson in how not to deploy vs a possessed bomb going first.

The screen was fine but ultimately I had my cents too close to the screen so the possessed with their super fast movement (warptime) were able to charge not just my screen but the cents that were behind waiting to counter punch.

It didn't help that I had nowhere to hide anything so the 3 armigers could use their mortal wound dealing guns to knock them down to 2 cents before the possessed charged but ultimately bad deployment + bad terrain = game over in about 20 minutes.

I learnt a shed load and Anthony was really helpful post game, probably taking pity on me(!).

It was game 3 so I could chill for the rest of the round with a beer whilst the others played their games.

I won a really nice dice bag for being the person to get tabled the fastest in the round. 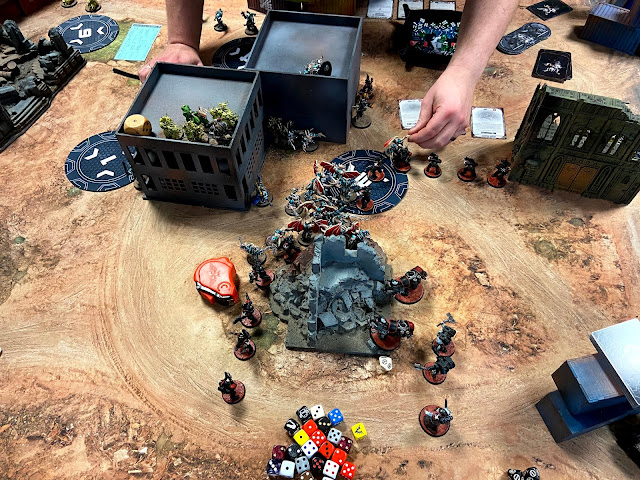 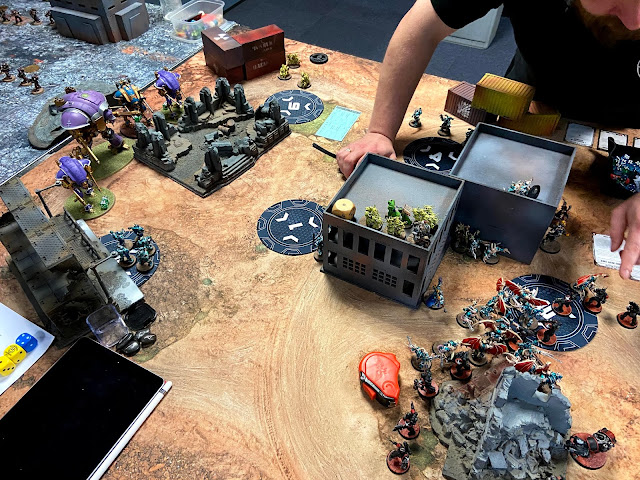 So overall day 1 hadn't been a roaring success. After the others finished their games we headed off for a curry, some red wine and then to crash back at the flat watching some trashy tv.