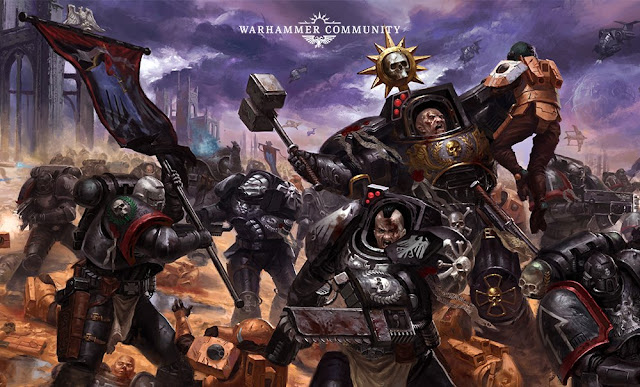 First up I've decided to headline each post I make about my new army 'From the Spire'...

And secondly, this weekend is my first event with my Raven Guard. Although it is a custom chapter and eventually I settled on the name Shadow Raptors.

Glad you asked. Here it is:

What am I expecting from the weekend?

Well here's the thing. I have played Space Wolves pretty much exclusively for 20 (yes I did say 20!!) years.

I have had 7 games since I decided to start using pure Raven Guard successors.

There is so much to learn, both about my army and how opponents armies interact with mine. What strengths do I need to watch out for, what weaknesses can I exploit etc etc.

So really I want to play 5 different armies and even if I get my ass kicked in all my games that's fine because I just want to learn all I can so eventually I'll start to get half decent with the army.

One of the things I love about the army is it's flexibility. It doesn't have to do the same thing every time and it seems to have an answer to every situation. The flip side of course is you have to know what, when and how to deploy said answer...

The other thing I love about the army is it really reminds of my Wolves from way back when. When they were really good. They used to dominate mid range shooting and combat. They'd never outshoot you at long range. And they wouldn't psyker you off the table. But once they got into mid range and closer they would give you a lot of trouble. This army seems the same, even more so with the forced cycling through tactical doctrines post errata.

Anyway just thought I'd share my list and whatnot before the big event. I'm planning on doing a bat rep afterwards, a debrief if you will.
Posted by The Great Wolf at 14:12