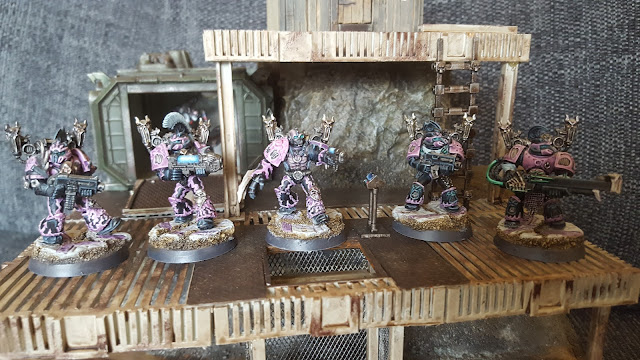 Greetings Sinners!
Just when I thought that I had finished with 40k, those tricksy, sneaky, double-dealing rascals at Games Workshop lure me back in with Kill Team.
I'll be popping over to Element Games tomorrow to pick up my boxed set and join in the fun event that they're holding for people to get the hang of the game. I've had a brief look at the rules for Chaos kill Teams and have taken a break from terrain building and have spent the day re-equipping Squad Prurient with a powerfist, plasma pistol and Plasma Gun. The only heavy weapon available to Chaos Marines is the humble Heavy Bolter. After spending way too long looking for one, I've decided to use their Blastmaster as a counts as Slaaneshi Heavy Bolter.
I'm not too sure on the points cost of anything so Kill Team Prurient have brought along some cannon fodder Cultists to make up the numbers. 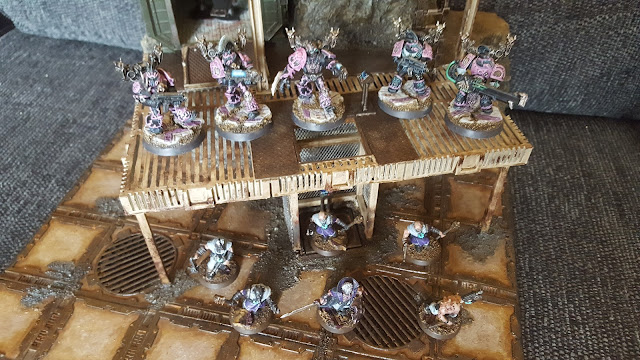 I'm hopeful that Kill Team will prove to be very popular on the tournament circuit and I feel sure that there'll be plenty of events springing up in the not too distant future. The scale of 8th edition (as well as the length of time it takes to play a game) holds no appeal for me at the moment whereas Kill Team feels like 40k is going back to its roots. Rob is interested as well so I'm sure we'll be getting plenty of games in in between Necromunda and I'm already toying with a narrative campaign called 'Nestor: The Early Years.'
So tomorrow the Castigators will return from their self-imposed exile and I can once again enjoy the experience of the humble Chaos Marine being a valid choice in the game again.