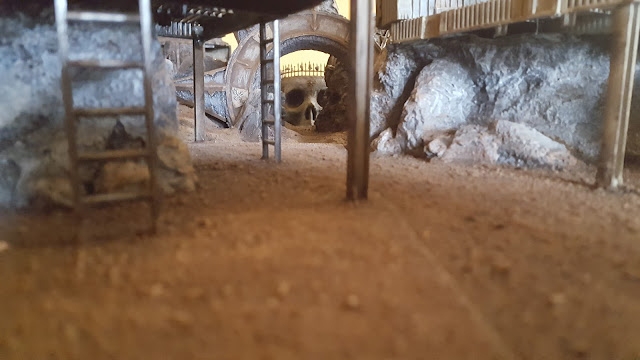 Things have been a bit slow around here just lately. I've been waiting (im)patiently for 40k to settle down and for GW to release the required FAQ for the Chaos Space Marine Codex.....thankfully the wait was worth it and it won't be long before I'm busy beavering away on my Castigators once again.

I haven't been completely idle though, for the last couple of weeks I've been immersing myself in the background of my small corner of grimdark. For me, 40k has always been about the background and the atmosphere that it invokes rather than crushing my opponents into the dirt. With rumours of Necromunda finally coming to fruition and Shadow Wars and Path to Glory occupying my thoughts I turned, once again to building more terrain so that Rob and I can kick off with our Path to Glory campaign.

8th edition and the joys of Ebay

I must admit to not having got hold of the new chaos codex yet so I'm only talking about my brief experience of chaos in 8th from a fairly narrow view point of Khorne from the index. I have heard that there are some errors in the book so maybe I'll hold off until another, hopefully correct, print run comes round.

If you have been playing chaos long enough you should remember when cult units were originally only allowed as elites (2nd, maybe 3rd edition). Then came the ability to unlock them as troops, usually through a named character or a Lord with the same mark. Most,  if not all, players liked this as you could have entire armies of Berzerkers, Noise Marines, Death Guard or Thousand Sons. Now we're back to them being elites only (so far, come on Chapter Approved, who knows what 'alternatives' will be allowed?) and much wailing and gnashing of teeth can be heard throughout the land. Personally I don't think it's all doom and gloom. With the new detachments now used for army building we can still have cult heavy lists with the Vanguard detachment (3 to 6 elite choices).
I may be biased but I think berzerkers have come off ok. With vehicles being generally more durable and therefore able to get close to the enemy, assaults are more achievable and reliable, from a Khorne point of view at least, with an Icon of Wrath (re-roll assault distances). Chain axes at 1 point per model are a must have, never mind pistols. +1 strength gives berzerkers 2 attacks at S6 and 2 attacks at S5 (from the chainsword), hitting on 3s and fighting twice each fight phase (not just you're own) means berzerkers are back to being the pre-eminent assault troops in the game.
My current favourite set up is 8 berzerkers, 7 with chain axes and chainswords, champion with powerfist, Icon of Wrath. 3 of these and either Kharn or a Lord (points dependent) coming out of a Spartan should break most enemy forces in a turn or two. Throw in some support from Maulerfiends and/or Bloodslaughterers and watch the skulls fly. I realise some people frown on FW stuff but my gaming buddies and I like using them and have no problem facing them.  To that end;

The vagaries of EBay.

Caveat emptor and all that. I saw an ad for a Kytan Ravager  (Kytan daemon engine as was) on offer for £45, bargain. It turned up like this; 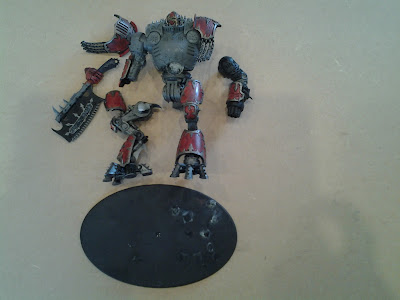 So it looks like a WIP series coming up, before I get to use him.

See ya all soon.