The Colours of Chaos - Squad Prurient

I love Noise Marines and I've always had at least one unit in my Castigators. A Slaanesh Chaos Space Marine army without them isn't really a Slaanesh army as far as I'm concerned. So I thought I'd take the opportunity to introduce you to Squad Prurient, formerly of Vorlath's Emperors Children, but who have now pledged their allegiance to the Chosen of Slaanesh, the Castigators. 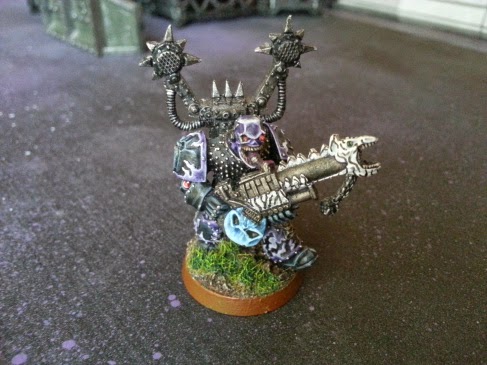 Squad Sublime has been the main-stay of the Castigators since their inception. They've served me well through all the years…which is over 20 years now.
Alas, they really are showing their age (aren't we all?) and I think the time has come to retire them. I look at them and say to myself “I don’t like the back packs, the head doesn't seem right and the Sonic Blaster looks wrong.” and unless they stand on a billiard table they fall over like my mate Neil on a lads night out!

So rummaging through my bits box, I discovered I had more than enough spare chaos bits to redesign my Noise Marines.
I still like the old Noise Marine legs but the bodies seemed a bit short and make the overall body look a bit too chunky for a follower of Slaanesh. So I wanted to keep the legs and add plastic chaos marine torsos to lengthen the body slightly. I then discovered that I didn't have enough of the legs to make a 5 man squad, fortunately my mate Steve (AKA Slaanesh Steve, Vorlath, or as I like to call him, the Forsaken One) had plenty knocking around and he sent me a couple. While chopping these up, a story developed in my head about how a squad of Noise Marines from Vorlath's Emperors Children turned their backs on their old Lord and joined the ranks of the Castigators :-)
The Warp Talon shoulder pads were screaming out to be used as Noise Marine pads and the Warp Talon helmets, with some added Helstrider crests, completed the look that I was after.
So without further ado I present to you Squad Prurient of the Castigators. 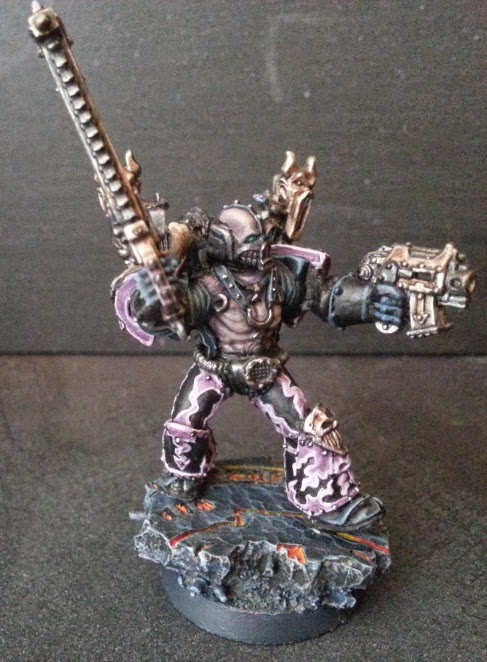 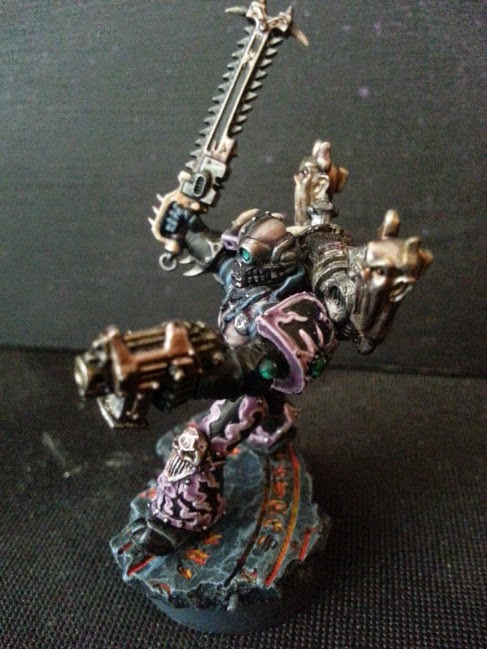 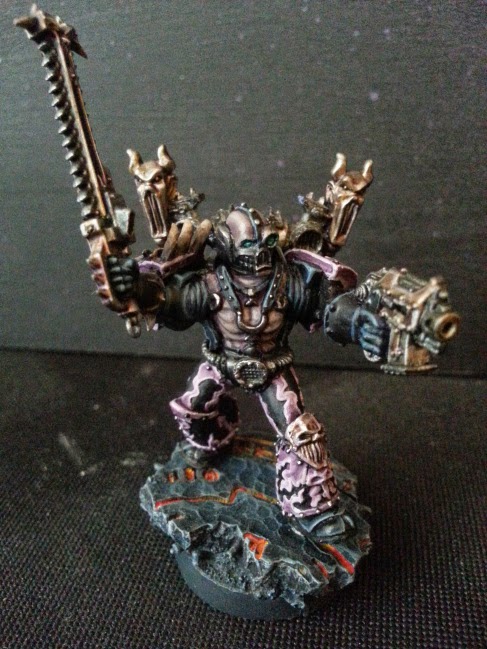 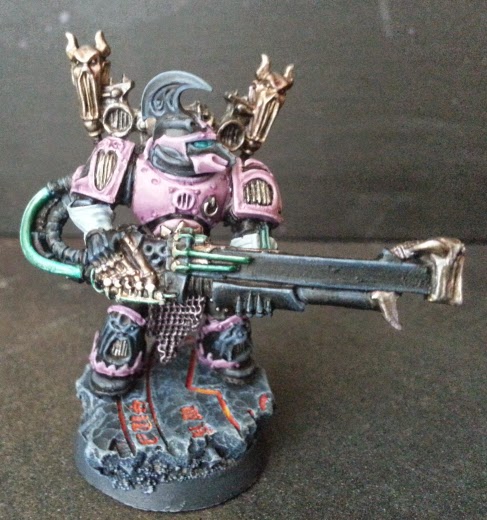 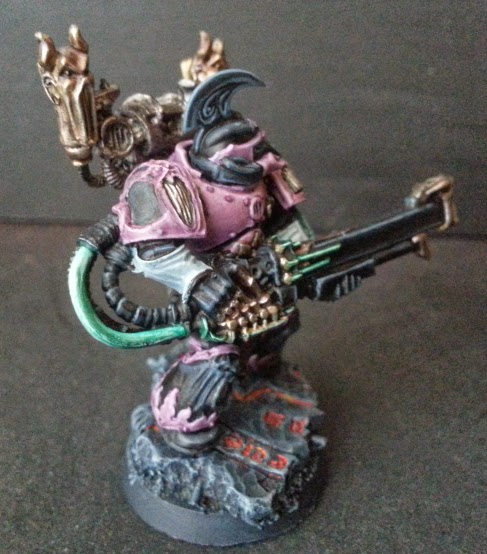 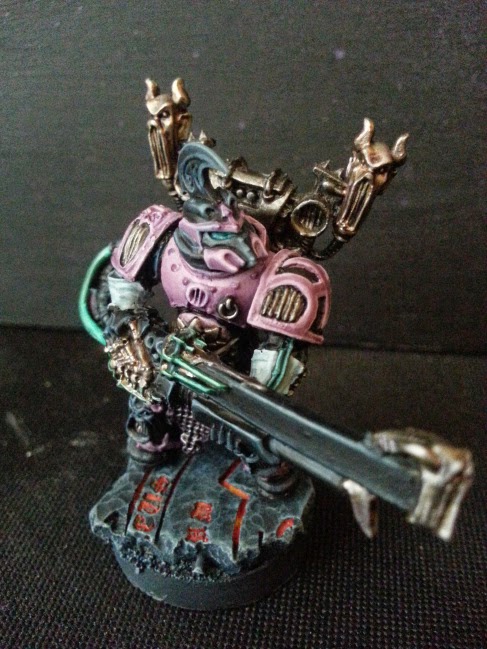 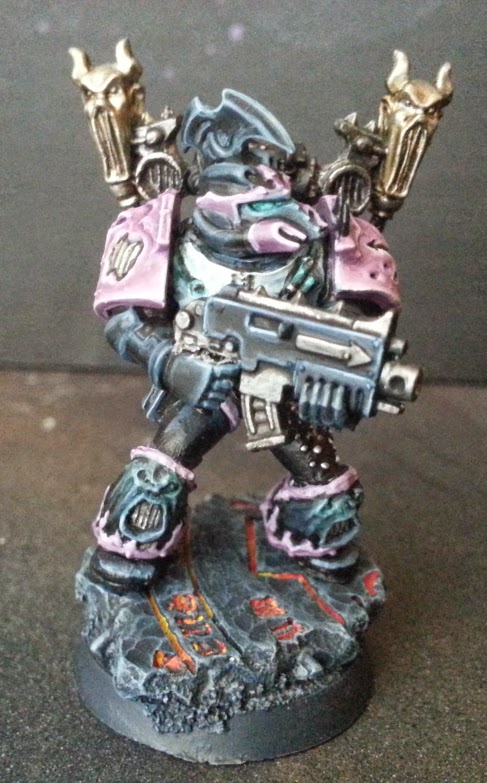 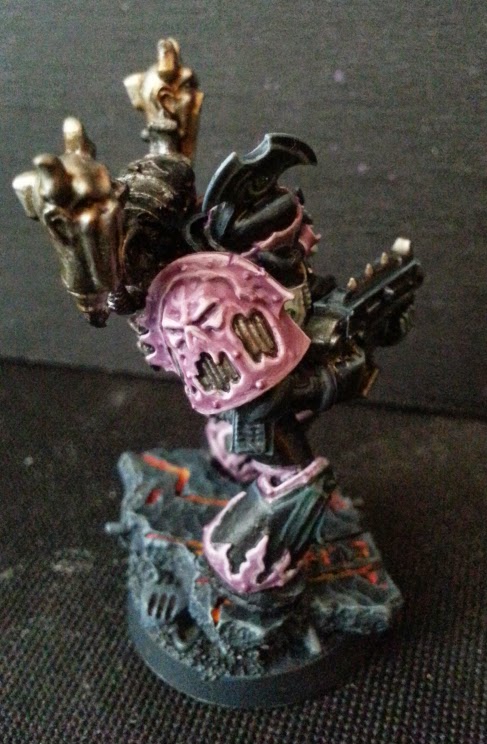 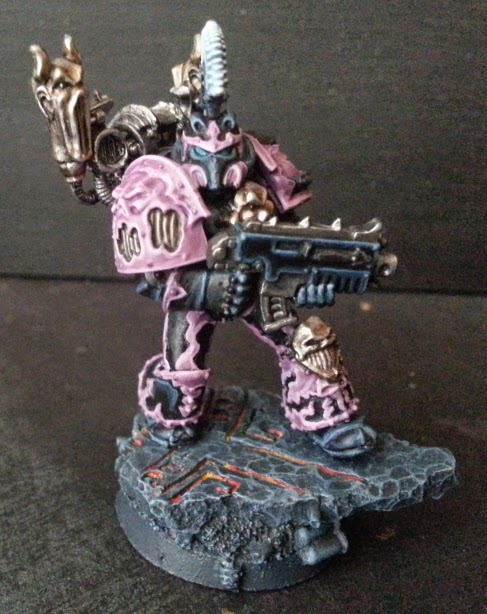 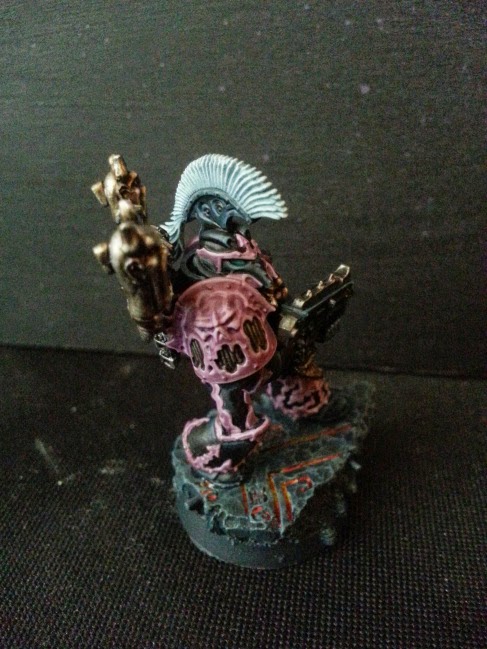 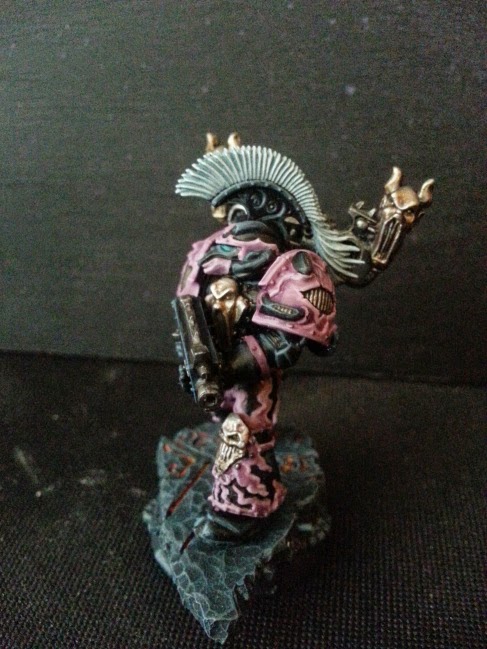 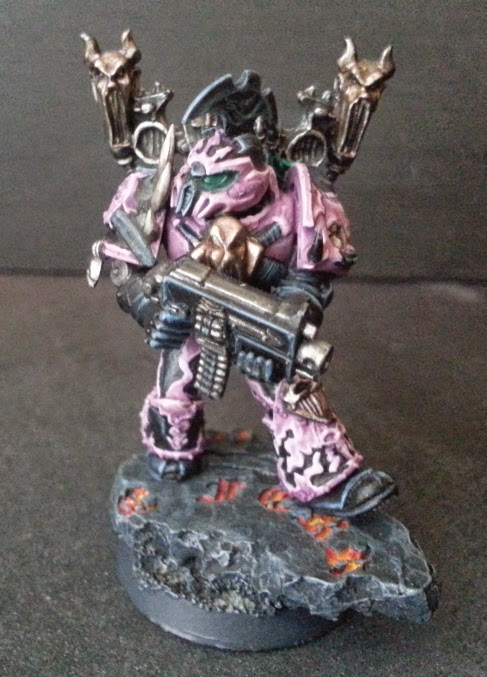 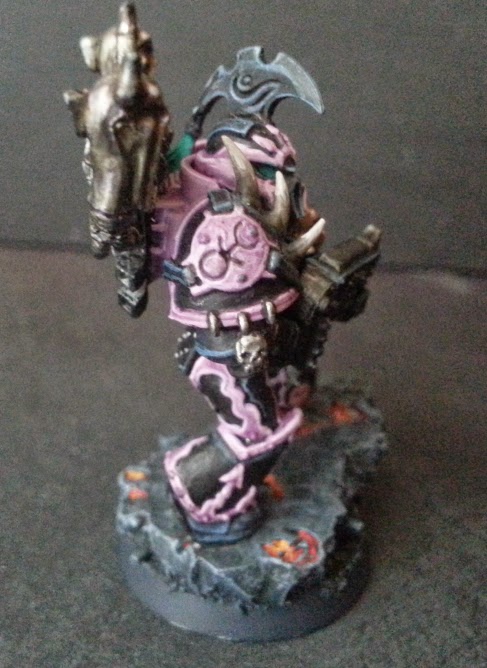 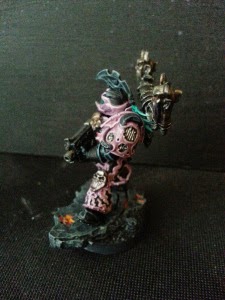 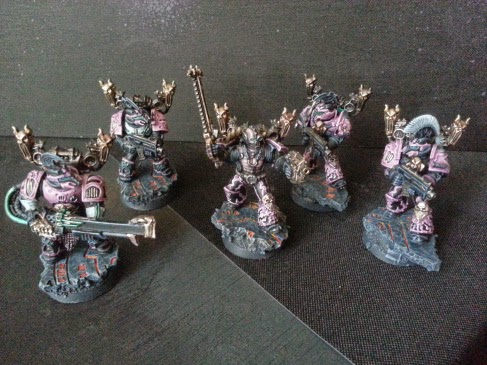 “The Compound is under the command of Festus Foulspawn, the Blightmaster of Nurgle” said Lucian.
“An impressive title, has he ascended?” Inquired Nestor.
“No my Lord, he just thinks highly of himself” sneered Lucian by way of reply.
“His hubris shall be his downfall, I do not intend to tarry here and become weak in our decadence like my brother Vorlath……”
A sudden squeal of delight interrupted them as the daemonettes caught sight of the prisoner entering the room, escorted by his guards.
Naked, but for the manacles that bound his hands and feet, he towered above the cultist guards who looked upon him with awe and fear.
“Brother! We were just talking about you” purred Nestor as he turned to face him. “Remove his shackles. Is that anyway to treat our most honoured guest?”
“But, my Lord. He is still dangerous. He ….” Said Valarius.
“Fool! He could have slaughtered you and your cultists shackled and blindfolded, if he so desired.” raged Nestor. “Question me again and our friendship will end Valarius.”
The cultist did as he was bid and scurried away as quickly as possible, fearful of both the prisoner and his Lord.

Nestor walked towards him, a malicious smile spreading across his face. Embracing him tightly he whispered in his ear “It has been too long Brother. I hope you have missed me as much as I have missed you?”
He stepped back and Valarius could see tears in his Lords eyes.
“Come, walk with me, Brother.”

The two of them walked in silence for a while, Nestor’s entourage keeping a respectful distance. They left the palace and entered the gardens. In the distance sleek and lithe mounts of Slaanesh roamed across the rolling hills and idyllic dales, their colours shifting from soft blues to pastel purples and gentle ochres as their tongues tasted the air for mortal desires that carried on the wind. Closer were the great meadows of gold and silver, iridescent plains that whispered softly in the scented breeze. Closer still were shimmering pools where lissom maidens and beautiful youths beckoned to passers-by, their faces and fertile forms moulded to the perfect desire of the heart.

“Your Lieutenants failed you Brother. Even the savage World Eaters bested them…Our Lady will not tolerate such failure.” Said Nestor as they entered a secluded garden.
“To mark your time here, I have planted an orchard in your honour….behold the Orchard of Vainglory!”
Before them stood row upon row of Soldier Pine. Impaled on every tree was a marine that writhed in perpetual agony. Vines crawled across their bodies, the vine’s thorns slicing through their flesh as their flowers dripped life giving nectar down the marine’s throats. Multi-hued insects crawled across their mouths eager to taste the vines sweet flavour. Every moan that escaped the marine’s throats would incite the insects to sting them and add to their agony.
“They will not fail you again Brother.” said Nestor.
“And is this to be my fate, Brother?”
“Would that it could be, then I could visit you and we could catch up on old times. But Our Lady is a demanding mistress and your presence here offends her.” He replied.
Five Noise Marines in the lurid colours of the Emperors Children appeared from the Orchard. Vorlath recognised Ryak Spittletongue immediately. For a tantalising moment, hope ignited within him, only for it to be cruelly extinguished as the Noise Marines turned their backs upon their former leader.
"I see you recognise your former comrades Brother. Unfortunately for you, they recognise only the perfection that the Chosen of Slaanesh can bring.

They made their way back to the palace, Nestor doing all the talking as Vorlath tried to conceal the despair clawing at his soul. Lucian, Darius and the rest of his war council stood waiting for their Lord’s return.
The brothers walked to the centre of the room where Valarius and his cultists stood around a vast, golden grate, bedecked with gems. Nestor nodded to Valarius and the cultists lifted the cover to reveal the portal.

“Our time is at an end Brother. My Lieutenants are eager to give glory to She Who Thirsts” Said Nestor. “I give you the same choice you gave me. Kneel or Die!”

Purple light bathed the room as Nestor drew 'Kinslayer' from its scabbard.
"Beautiful isn't it? I travelled the six hells of Slaanesh to find this blade." Said Nestor as he slashed the air with the daemonically infused sword.
As if for the first time he noticed the power weapon on the table. He picked it up in his left hand.
“Remember this blade Brother? I gave it to you when we fought side by side. It pleases me that you kept it.” He said as he swung both blades through the air. “So Brother, what is it to be?”

“Do you see Lucian? The right hand of Slaanesh pays homage to the Chosen” he mocked.
“He is the right hand no longer, my Lord” replied the Sorceror.
And with that, the power sword sliced through his Brother’s wrist, severing his right hand.
Placing both swords upon the table, Nestor picked up the severed hand “It served Our Lady well in the past. Perhaps it will serve me the same, Brother? It will make a fitting necklace to remind me of you. ”

Lifting Vorlath from the floor, Nestor pulled him close and kissed his cheek. “I forgive you Brother.” Whispered Nestor, Before pushing him back into the Portal that led to the six hells of Slaanesh.
Throwing the power sword after him he said “Seal the grate Valarius…..now where were we?…..Ah yesss….the Blightmaster….” 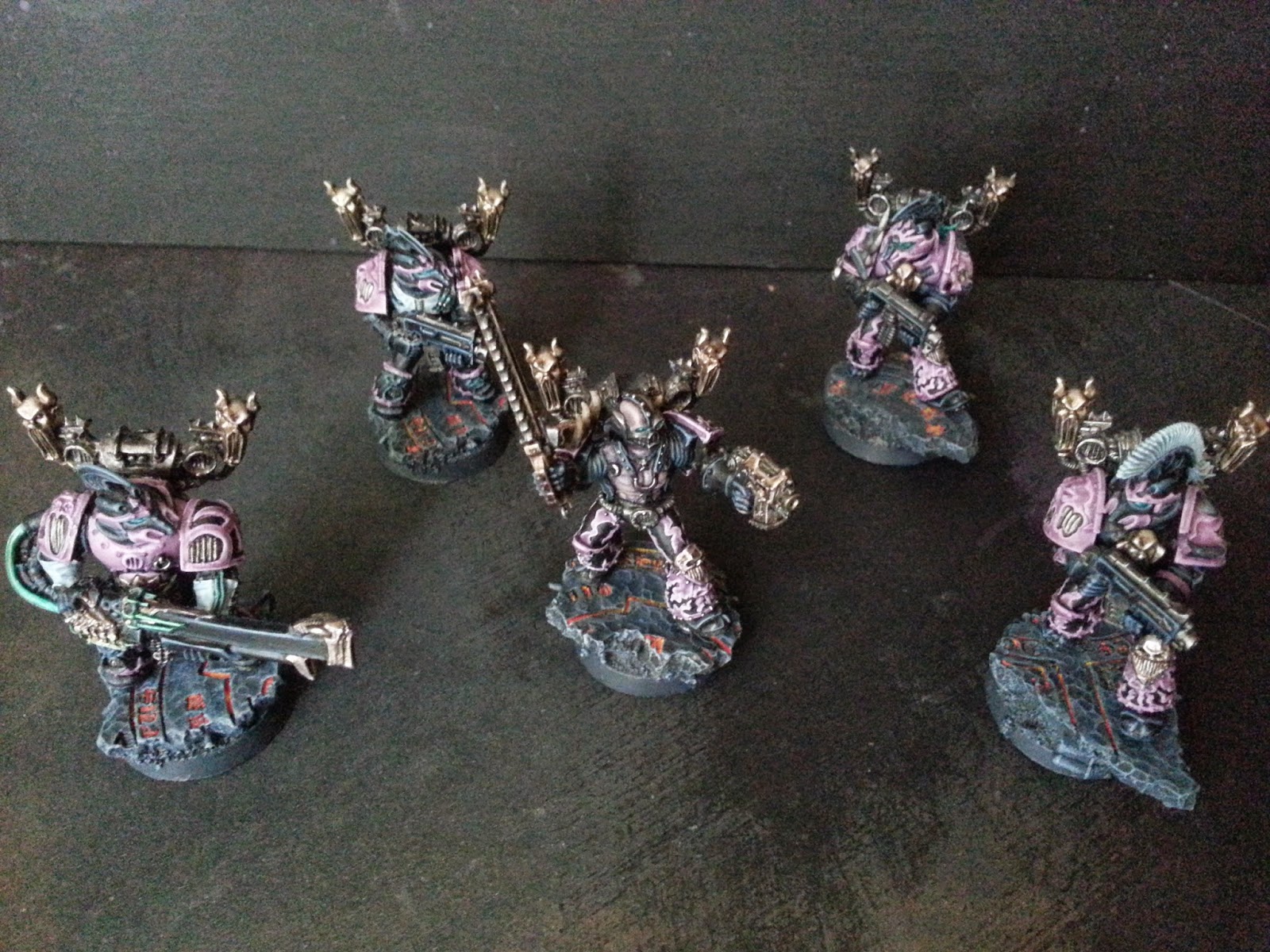 I'm pretty happy with the way these boys have turned out.
On the tabletop they usually perform pretty well. The Blastmaster is usually more of an annoyance than a direct threat, but if all they achieve is to make an opponent spread out, then they've done their job. Sometimes they get lucky and pin a unit, which can really upset an opponents plans. In the past I've had them wipe out drop-podding Marines that have huddled up too much in one round of shooting. For a 125pts I find them to be a solid choice, they can sit on an objective and just blast away whittling down units over the game without appearing to be an immediate threat. They always seem to do well against Wave Serpents and soon become a priority once my opponent realises they won't be getting a cover save, but that's okay because it gives my assault elements the opportunity to get up close and personal.
I have an 1800pt tournament planned in July and I haven't decided how many units of Noise Marines I will take yet, one thing is for certain though, Squad Prurient will be there.

Until next time, may Our Lady grant you her number.
Posted by Castigator (Gary) at 04:15