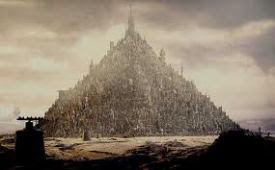 “I shall cut many threads this day” boasted Sven as he fastened himself into his harness.
“None shall escape our murder-make” agreed Hjad with a raucous shout.
The rest of the pack merely smiled at their youthful exuberance. It was their first mission as a Grey Slayer and although Heinrik had no doubt that they had earned the right to join the pack, their eagerness must be tempered, they still showed the wild abandon and occasional recklessness that typified a Blood Claw.
The deck vibrated. There was a dull, dead sound like a giant gong striking arrhythmically in a distant palace of echoing marble. As one they donned their helmets and prepared themselves for the trials ahead.
“For Russ and the 13th” Said Heinrik as the Drop Pod hurtled towards the Hive city. 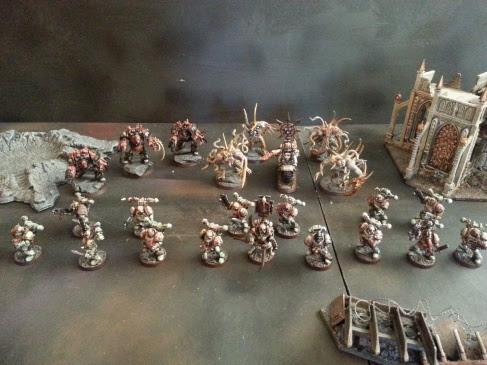 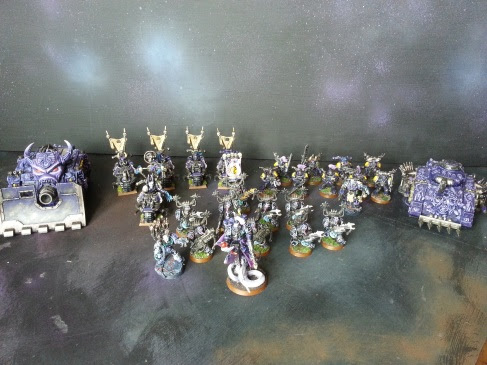 Deployment
Rob won the roll to deploy first and took it, Deploying everything directly in front of the Objective. 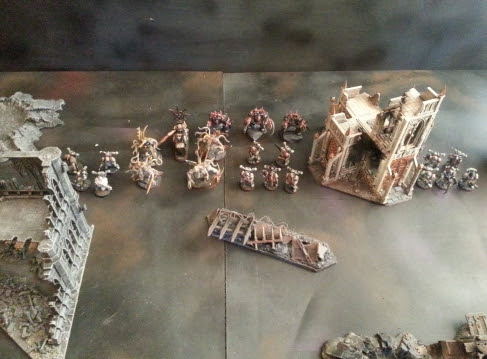 The Castigators spread out more with the Vindicator hiding in the ruins and Nestor and the bikers to the right. on the far left (not in picture) was the Predator. The Noise Marines and Chaos Space Marines held the centre. 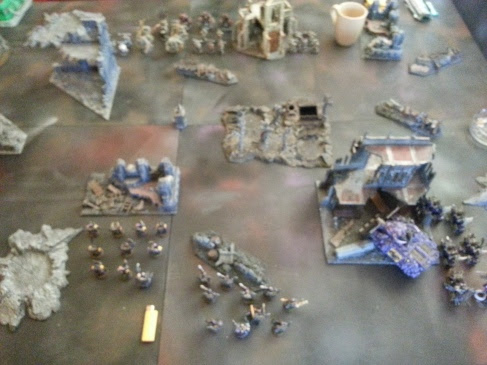 Turn 1
Under cover of darkness the Death Guard made their move, Festus and his Spawn moved directly for the Comms Relay supported by all three squads of Plague Marines. The Obliterators kept pace with the army and spotted the Noise Marines in the gloom. 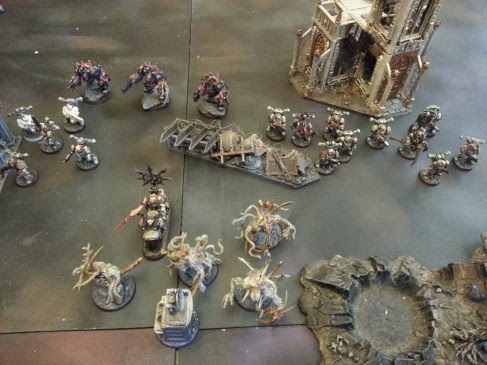 The Obliterators morphed their bodies into Plasma Cannons and turned night into day as incandescent explosions erupted throughout the Noise Marines ranks. As the smoke cleared two Noise Marines had fallen. 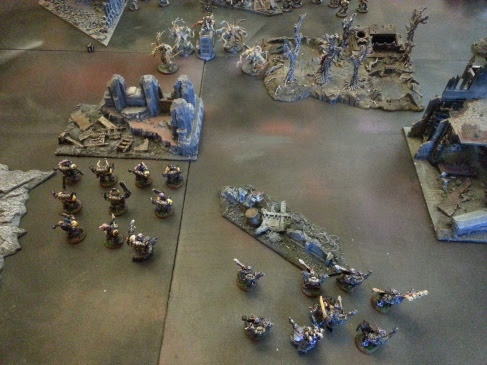 Festus and the Plague Marines made use of the darkness and ran forwards to secure the objective.
The Castigators Vindicator moved through the ruins to target the Obliterators while Nestor and the bikers swung around to support the Noise Marines. 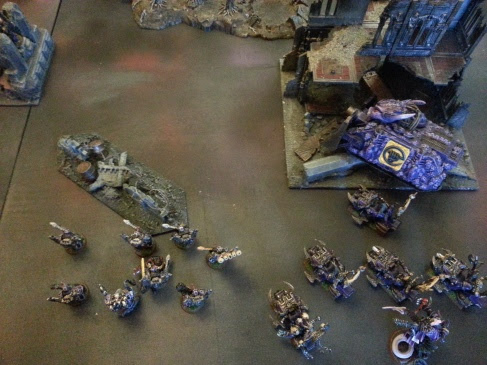 The Chaos Space Marines moved forward into the ruins, the perfect location to lay down some fire power and Festus and his Spawn. 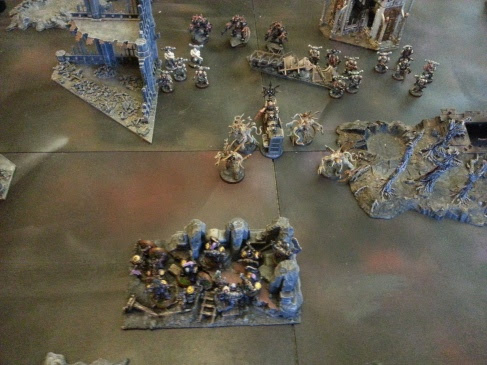 The Vindicator targeted the Obliterators but the shot flew wide and killed a Plague Marine. The Noise Marines, Chaos Marines, Bikers and Predator shot with abandon at Festus and his Spawn and killed one whole Spawn! 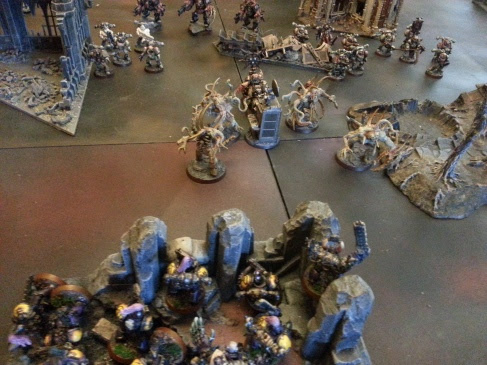 Turn 2
Sensing a quick victory Festus urged his spawn on to surround the Slaanesh Marines in the ruins, while the Plague Marines continued their relentless march to surround the objective. 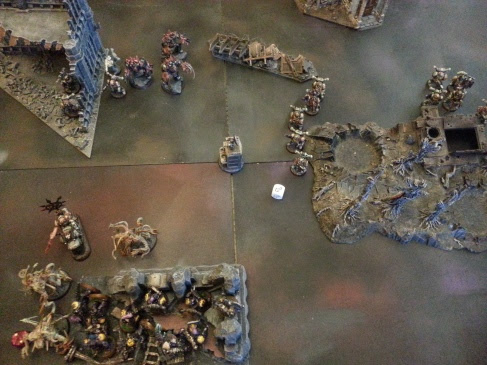 The Obliterators targeted the Vindicator but those shots that hit failed to penetrate its thick armour. Tosis Mire's Plague Marines tried as well with their Meltas but again failed to penetrate the armour. The smell of roasting meat filled the air as Festus flamed the Slaanesh Marines with his Burning Brand, killing 5 of them! It all proved to much for the Slaaneshi warriors and they fell back 4", not enough to prevent Festus and his Spawn charging them. 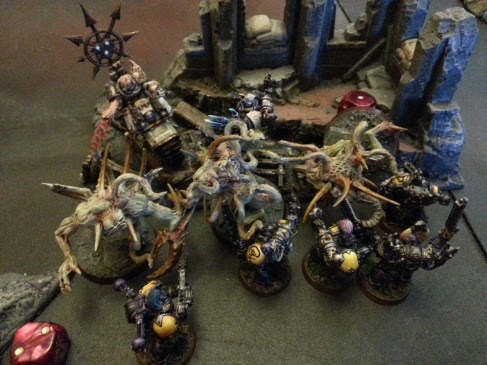 Festus roared his challenge to the Slaanesh champion and Darius eagerly accepted. with lightning reflexes Darius slashed across the Nurgle lords throat but miraculously his lightning claw was turned aside by Festus' Sigil. Laughing in Darius' face he cut him down with his power axe. The Spawn suffered a wound but tore apart two Slaanesh Marines forcing them to flee once again. 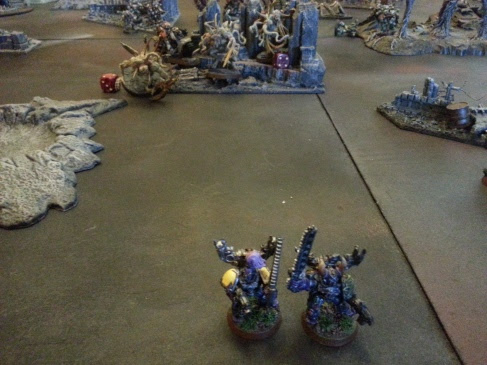 Nestor's trap closed around the overstretched Festus, determined to rid himself of this troublesome foe, his squad closed on his prey.  The Slaanesh Marines rallied once more and turned to face they're attackers. 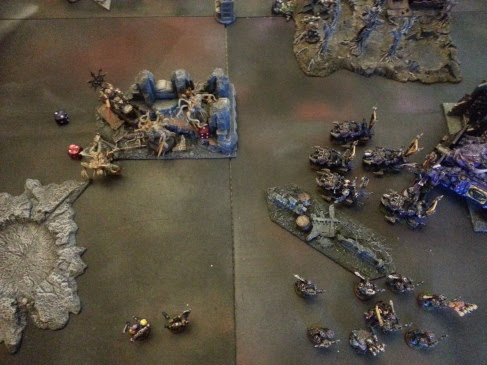 The Vindicator targeted the Nurgle Obliterators,  but the shell scattered wildly missing every one. The Noise Marines levelled their Sonic weapons on Festus and his Spawn, killing two and wounding the third. Nestor and his bikers finished off the last and put a wound on Festus. The Predator turned to face the lone Plague Lord and let rip with abandoned glee.......and missed with every shot!
Turn 3
The sound of tortured metal shrieked across the battlefield followed by a shower of metal shards as Heinrik Wolfsbane's Drop Pod crashed into the underhive. Within seconds the Space Wolves deployed amidst the Death Guard forces. 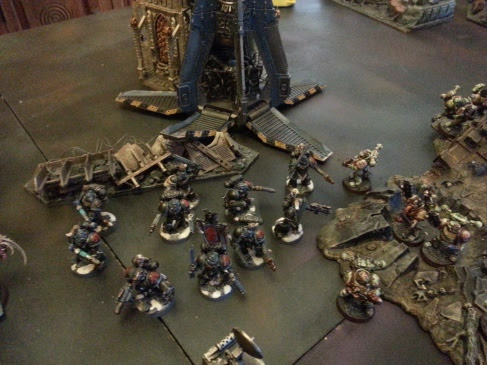 The Space Wolves opened fire on Septicus's Plague Marines gunning down two of them. 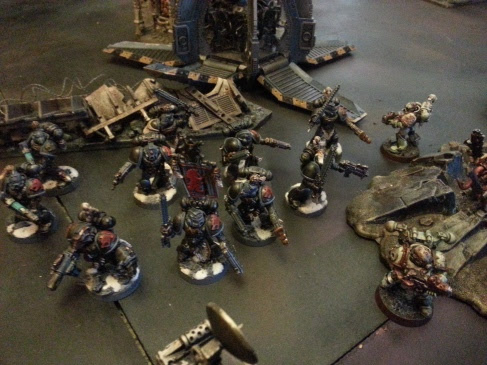 Festus Moved over towards the Noise Marines ready to bring his burning brand to bear on them while Tosis Mire and his squad moved up to draw a line on the Vindicator. The other two Plague Marine squads moved towards the Space Wolves and the Nurgle Obliterators turned to target Nestor and his Bikers. 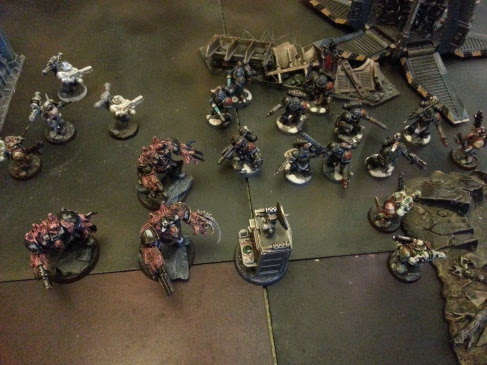 The Plague Marines with the flamers hosed down the Space Wolves killing two with flamers and Bolter fire. Festus torched the Noise Marines, incinerating 5 of them with his daemonic flame. 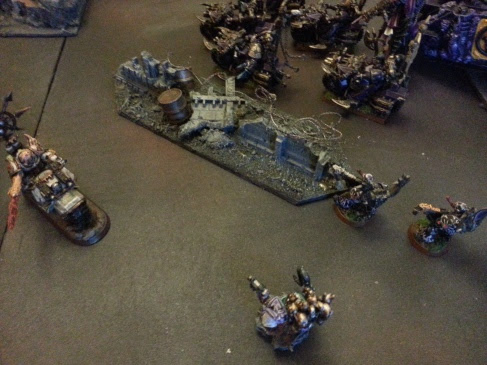 Tosis Mire's squad shot at the Vindicator stripping a hull point from it. The Obliterators once again morphed their bodies into Plasma Cannons and targeted the bikers. In a spectacular display of shooting they wiped them and put a wound on Nestor. 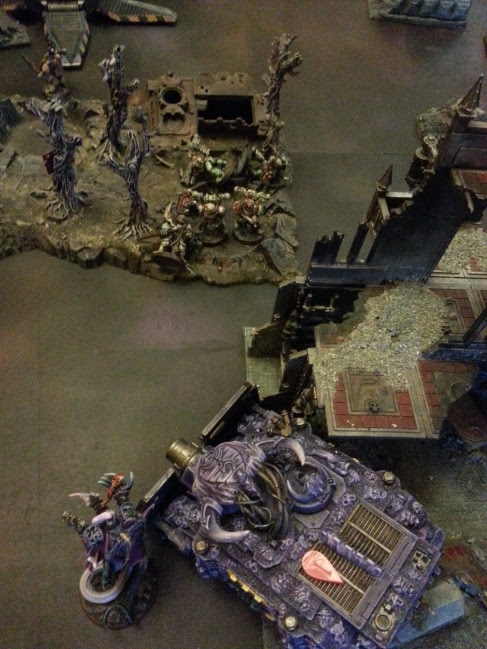 Festus attempted to charge the remnants of the Noise Marines but was a victim of his own success and he was out of range. Septicus' bellowed a challenge as his Plague Marines charged into the Space Wolves. The Space Wolves counter charged, killing a Plague Marine. Septicus smashed Heinrek to the ground with his bolt pistol and Papa Nurgle rewarded him with an additional wound! 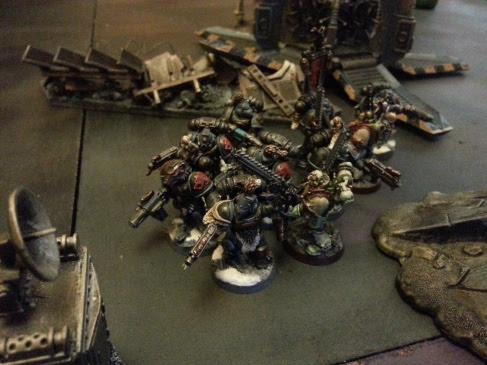 Nestor moved around the rubble to close the distance on Festus, as the Noise Marines headed for the Comm relay. 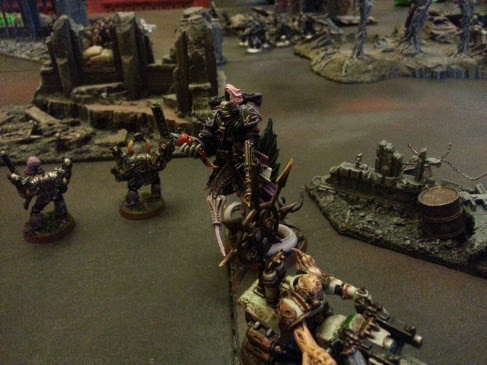 The Vindiactor opened fire on the Obliterators and finally the shell hit home, killing two of them. The Predator once again opened fire on the Nurgle Lord and once again everything missed. "The crew of the Predator would benefit from a stint in an isolation cube" thought Nestor to himself! Nestor and the Slaanesh Marines shot at Festus but failed to wound him. The Slaanesh Marines declared a charge and with a flick of a switch Festus incinerated both of them with his burning Brand. Nestor charged in eager to get to grips with a worthy adversary. Lightning danced across the Plague Lords armour as Nestor struck him four times but even with his lightning claw he failed to wound once! Oblivious to the pain, the Plague Lord hit and wounded with every attack smashing Nestor to the ground and trapping him beneath his slain steed.
Turn 4
At the loss of their Wolfguard leader the space wolves redoubled their efforts and hacked down Septicus' squad for no loss.
Tosis Mire's squad headed for the comm relay, determined to claim his prize. Festus ignored the Noise Marines and headed over to the Vindicator. 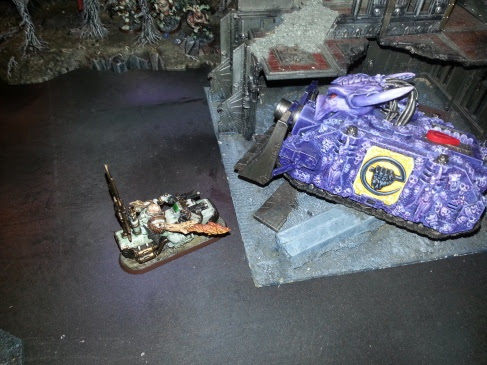 The Obliterator and Plague Marines moved over to help out the beleaguered Septicus. 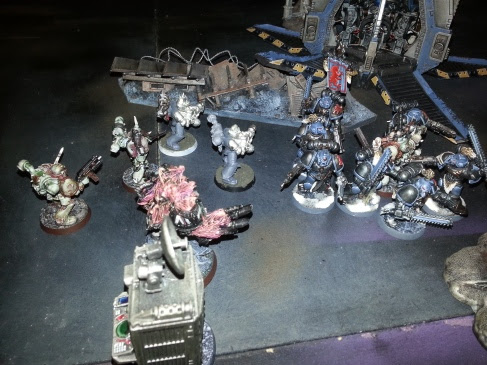 Festus charged the Vindicator wrecking it with ease. The Obliterator and Plague Marines charged into the Space Wolves killing 5 (it was my turn to roll for their armour saves) as they put a wound on Septicus.
The Noise Marines headed for the comm relay sprinting as fast as they could. Finally the Predator switched on its targeting system and all four shots found their mark. A lascannon penetrated Festus' petrol tank and hurtled the Plague Lord into the ruins smashing his legs to a pulp.
Turn 5
The last two remaining Space Wolves battled on against overwhelming odds, dropping a Plague Marine from the flamer squad for no loss.
Tosis Mire and his squad headed towards the comm relay and as much as they wanted to gun down the Noise Marines, the objective was what he really wanted so they sprinted instead to claim their prize. 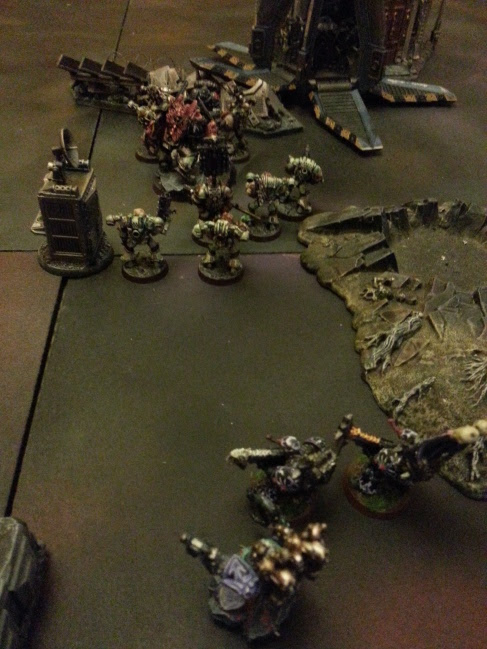 The Plague Marines continued their assault on the Space Wolves but once again the Wolves reflexes proved too much for them and no wounds were caused.
Nephran Lustviper and his two remaining Noise Marines moved towards the objective. The Predator turned on the spot and brought its guns to bear on Tosis Mire's squad. The Predator found its mark and two Plague Marines fell to Lascannons. Nephran and his Noise Marines charged Tosis' squad determined to claim the comm relay for the Dark Prince. One of the Noise Marines fell to a Melta gun on the way in. 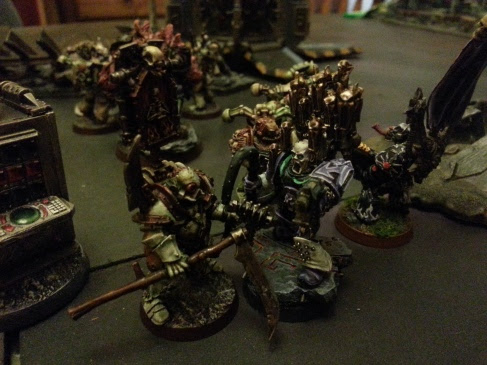 The Noise Marine and Plague Marines failed to wound each other as all eyes were fixed on the duel between the champions. Nephran's lash wrapped around Tosis's legs dropping him to the floor as he pumped bolter shells into his helmet but Tosis's armour turned aside all three hits. Swinging his power axe in a wide arc, Tosis's axe buried itself deep between the Slaaneshi champions legs, splitting him in half. Papa Nurgle looked on and was pleased with what he saw, Tosis' screams echoed across the battlefield as Nurgle gifted him with ascension! 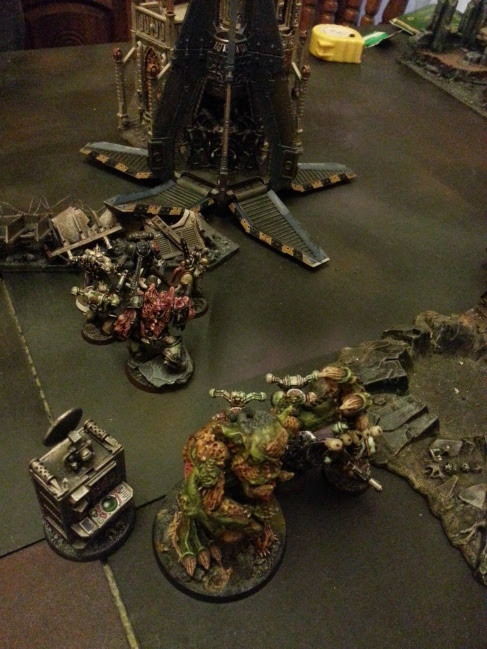 Turn 6
We rolled to see if the game continued and the game ended!!
The objective was contested, so the Space Wolves win....Victory for the Crusade of Deliverance.... 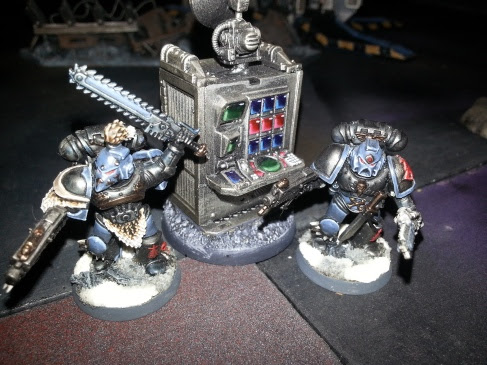 The light darkened as though a thunderous storm was rolling swiftly across the ash blown Underhive. Tosis could feel the scrutiny of Nurgle upon him and he was pleased. Thick gelatinous tendrils warped from his rapidly congealing innards. Writhing with their own intellect, they bound his limbs as pure ethereal energy infused his mortal shell, swelling his body to enormous proportions. Tosis screamed in agony as his body attempted to stretch and accommodate the bulk of his new diseased form.
The few remaining members of Tosis’ squad looked on in awe at their leader’s transformation. It was clear he was struggling to contain the raw power within his tortured frame. As the light within the Underhive dimmed further, the Death Guard dragged Tosis back towards the extraction point, leaving the Comms-relay in the hands of the false Emperors lapdogs.
Posted by Castigator at 09:59