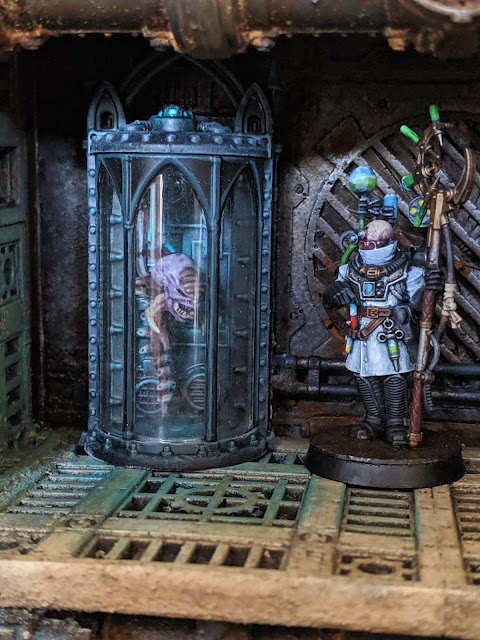 Fellon cursed as the papers tumbled from his desk and scattered across the floor. He quickly snatched them up and stuffed them into his journal in no particular order.
"Calm yourself Fellon" he muttered to himself.
He took a deep breath to still his racing mind and formulate a plan.
He had to get away, leave the compound and travel deeper into the Underhive where even the most determined of Inquisitors couldn't find him. With his notes he could set up another laboratory in a more remote level and continue to perfect his rejuvenation serum. He would leave with only a handful of retainers to avoid drawing unwanted attention. Of course, he would need to take one of the aberrations with him to carry the specimen but hopefully the Inquisition would be too preoccupied dealing with the miners of the Kindred to notice him slip away.
The Inquisition!
Just the thought of them was enough for panic to claw at his mind once more. Fellon took another deep breath to calm himself. Fellon was convinced that they had stumbled across him while investigating another matter. They were Ordo Hereticus, the witch hunters, and not the Ordo Xenos that he would expect to be searching for him. Perhaps, once they realised that the Kindred harboured no Psykers, they would leave the Kindred be....perhaps.
Guilt gnawed away at his insides as he contemplated the Kindred's fate. They were just simple miners who had overcome adversity; with the help of his serum he told himself; and were no threat to the upper echelons of the Imperium.
Not everyone had overcome their adversity in equal measure though, mused Fellon as he glanced across the room at his faithful retainer. There had been 'aberrations' with his earlier work but that was to be expected with such ground breaking work. 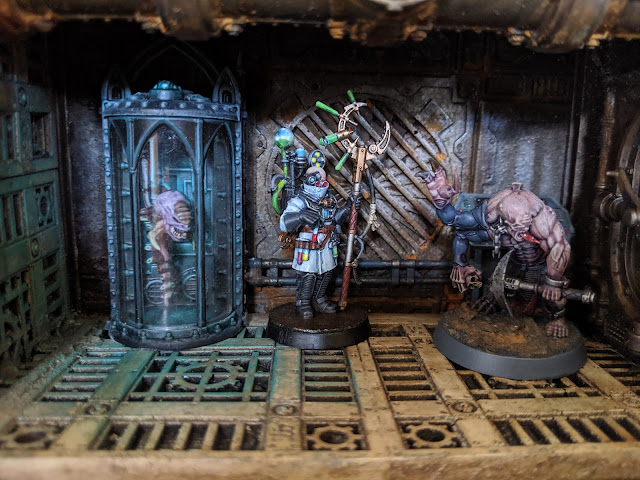 Every adjustment he made to his serum showed improvement and he was convinced he was close to completing his work.
"But your work is complete Fellon."  said the stranger entering the room.
"It has been completed for some time now."
"Who are you....and what are you doing here? stammered Fellon.
"My name is Malakhi my good doctor....and I'm here to show you the fruits of your labours!" 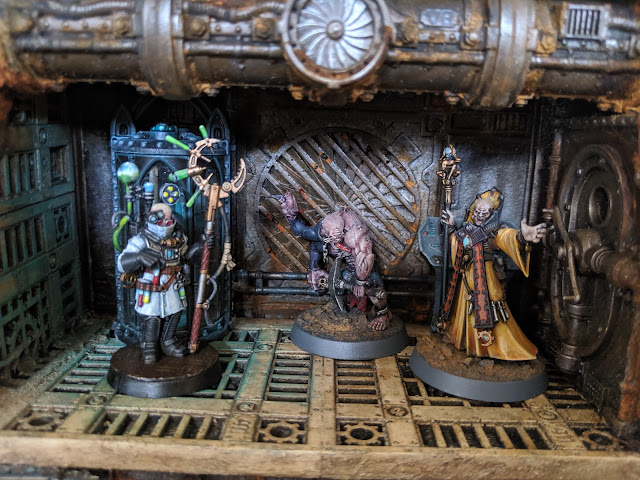 "I don't understand....I don't have..." Fellon's words fell away as the Magus stepped aside to reveal the figure standing behind him.
Fellon stared in horror at the creature standing before him. He looked at the thing in the tank, then back to the monstrosity that moved towards him. This couldn't be... he had been meticulous in his research... all those years of careful testing and re-testing... this wasn't possible!
Fellon Black opened his mouth to scream and the thing in the tank made manifest sealed it with a kiss.... 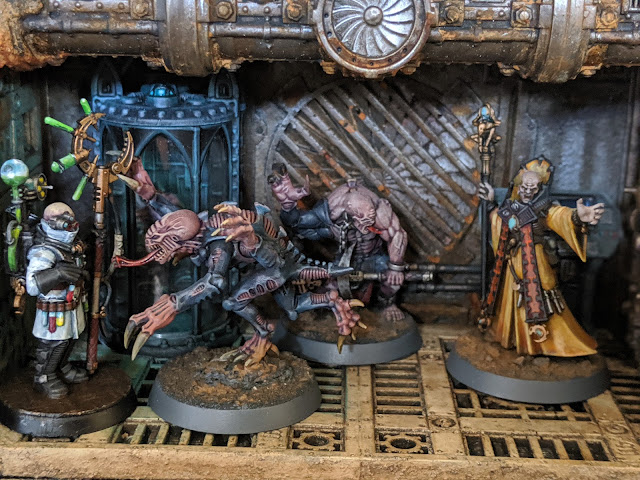 The Kindred are attempting to protect the elevator leading to Fellon Black's compound and his hidden laboratory. Once again the Kindred start with a full crew to fend off the Voodoo Dolls and the Inquisitor's reduced forces. This time however, both the Voodoo Dolls and the Kindred must keep track of their casualties for the next game.
Thanks to their efforts in gathering information on their assailants, the Kindred have allies of their own this time in the form of a Magus, 2 Aberrants and a Genestealer! 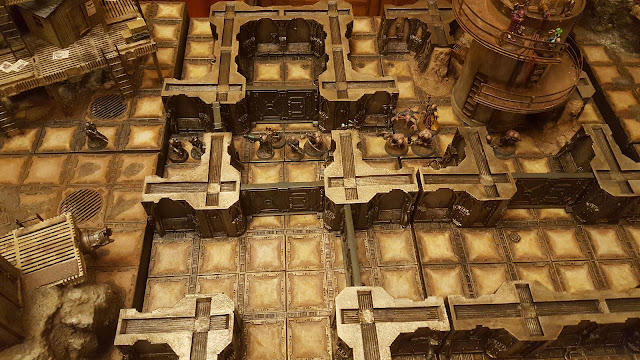 Maman Brigitte skirted the edge of the swamp on the right. Preacher and Blaine stayed close allowing the Voodoo Dolls to lead the way. 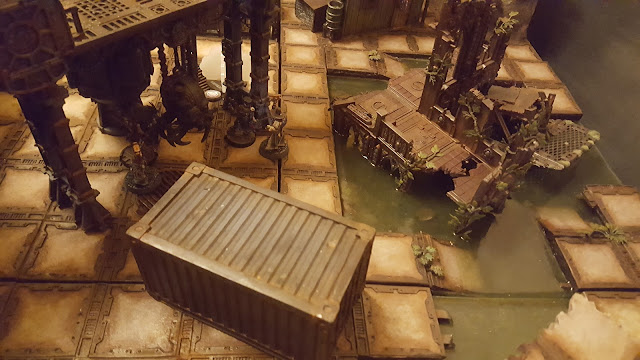 On the left the Escher Champion Kat and the ganger Sabine moved up to support the Ambot Ju-Ju. 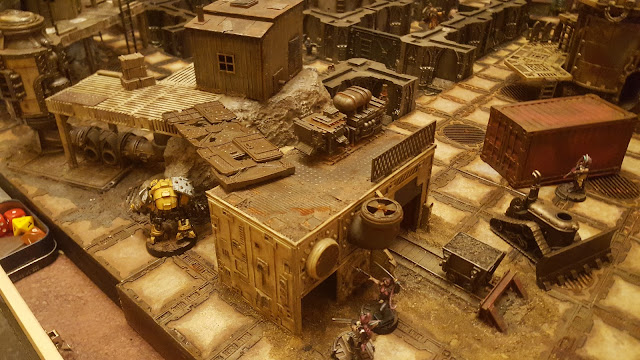 The main doors leading to the Compound opened and shots rang out forcing Inquisitor Dragosani into cover in the centre. 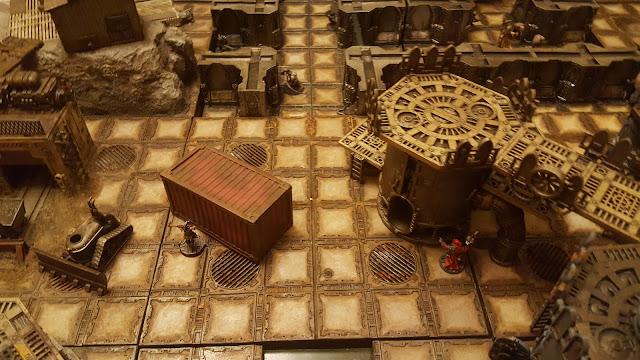 The Kindred moved up through the derelict tunnels ro meet the intruders advance. 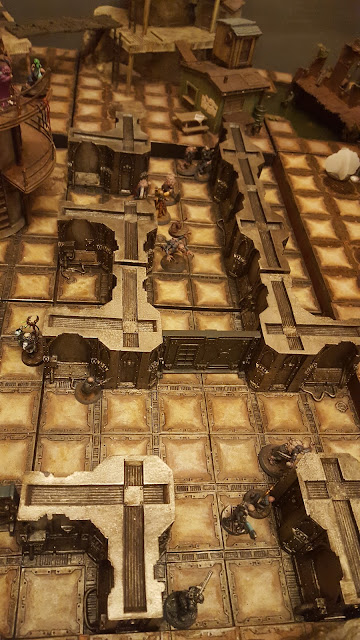 An Aberrant lumbered forward into the sights of the Ganger Tia's Hotshot Lasgun... 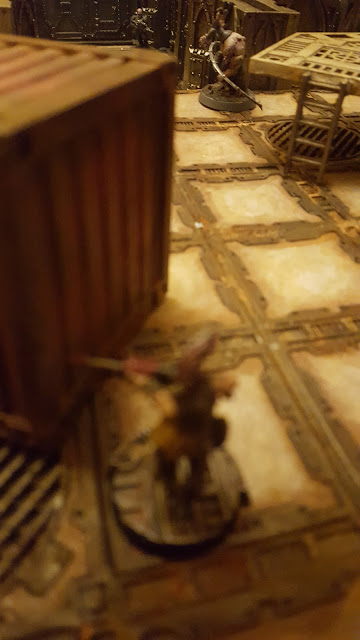 Inquisitor Dragosani moved out of cover and put the wounded monstrosity down permanent. 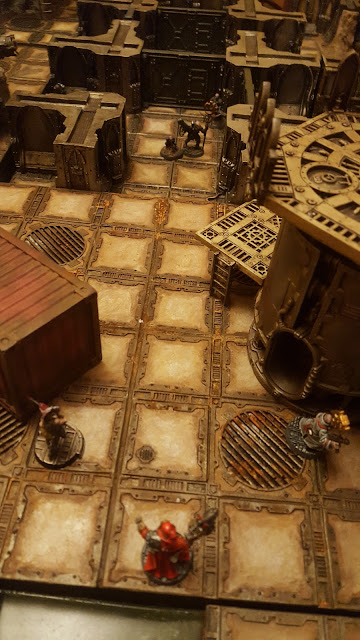 The Kindred redeployed to face the threat from the centre and the left. 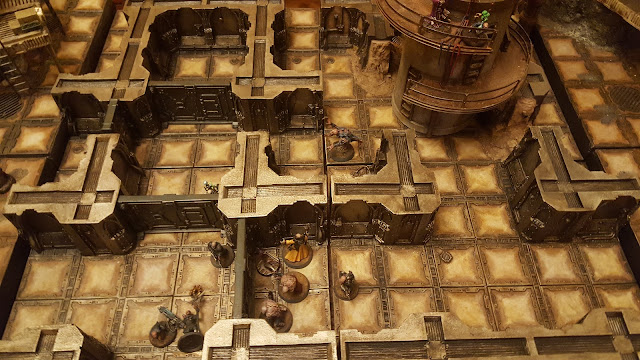 Sabine and Kat continued their advance on the left, blasting away at the Neophyte gangers. 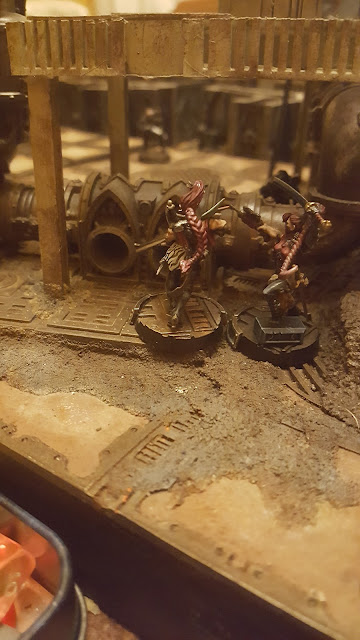 Kat dived for cover as Neophyte emerged from the shadows, Boltgun blazing... 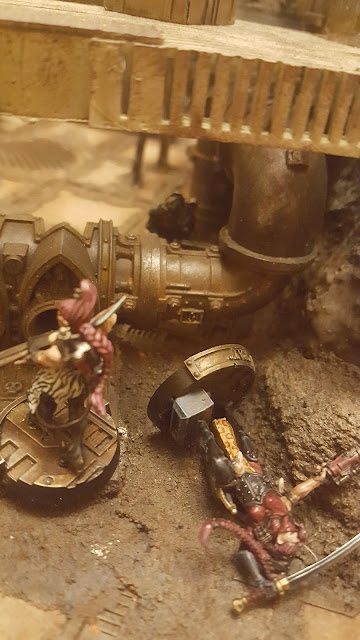 With cat-like reflexes, the Escher champion jumped to her feet and took the Neophyte down with a well place dart from a Needle pistol. 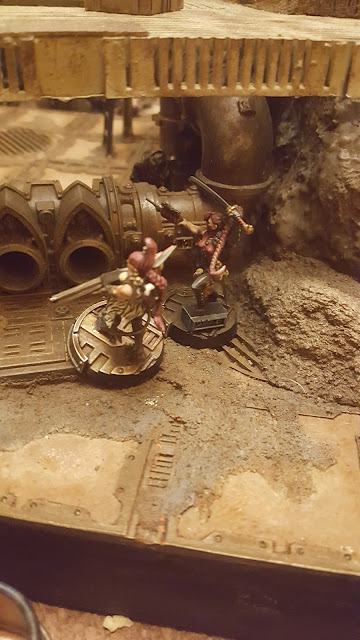 Kat looked on in horror as a nightmare hurtled towards them. The ex-Death Cult Assassin had vague recollections of seeing such an abomination in her murky past. Her gang sister Sabine had no such qualms however. Living up to her name of the Hero of Rockridge, the ganger leapt across the pipe and slid beneath the creature's headlong charge, slicing its belly open with her stiletto blade and showering herself with its blood. 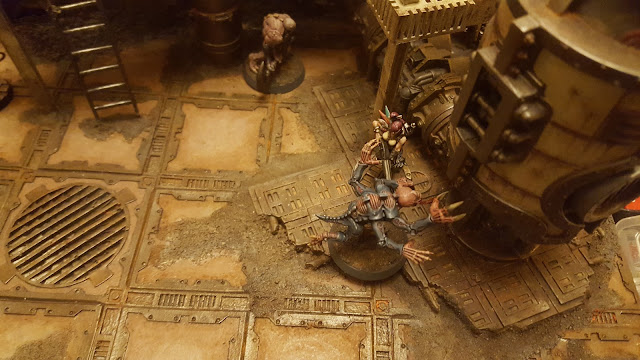 Kat pushed aside her intrusive thoughts and leapt over the pipe into an onrushing Aberrant. Her power sword sliced apart the monstrosity with ease. 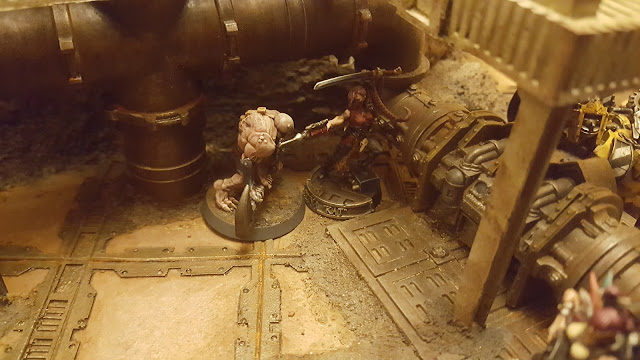 Horrified at the loss of their kin, the Kindred surged towards the perpetrators. The ganger Tempus blasted Kat from her feet with a well placed Krak grenade, leaving the Escher champion seriously injured. 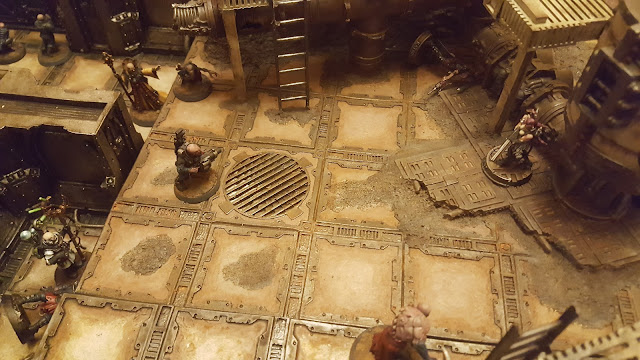 Sabine was gunned down by the Neophyte Viper from the gantry, his Hotshot Lasgun punching through her flimsy armour and taking her out of action. 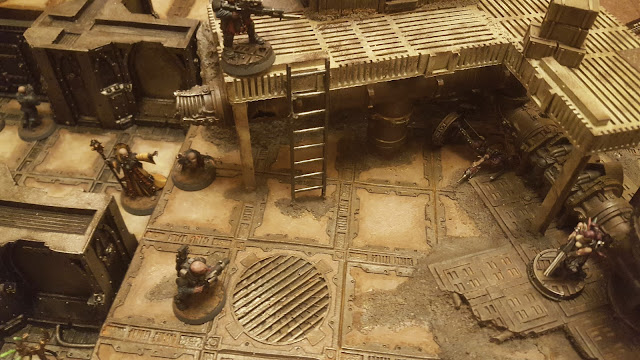 The Kindred's Magus charged into the seriously injured Escher champion and took her out of action. 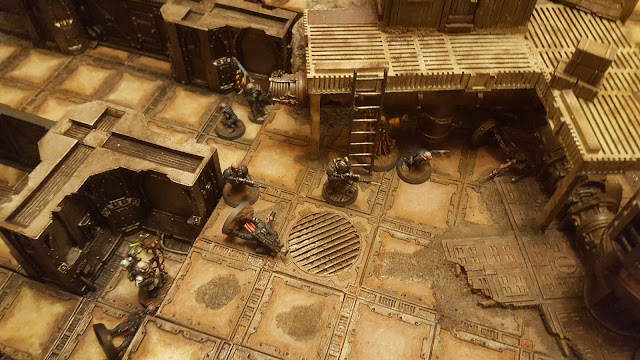 A battle royale broke out as the Aberrant Mongo charged into the Escher's Ambot Ju-Ju. Mongo swung his hammer, smashing through the Ambot's thick armour and leaving it with 1 wound. The Ambot retaliated, swinging its fists towards the abomination. Ju-Ju's circuits had obviously taken damage though as the Ambot failed to land a blow. Ju-Ju re-calibrated its sensors and struck once more, all three of the Ambots attacks smashed into Mongo wounding the Aberrant 3 times and reducing its save to a 6..... 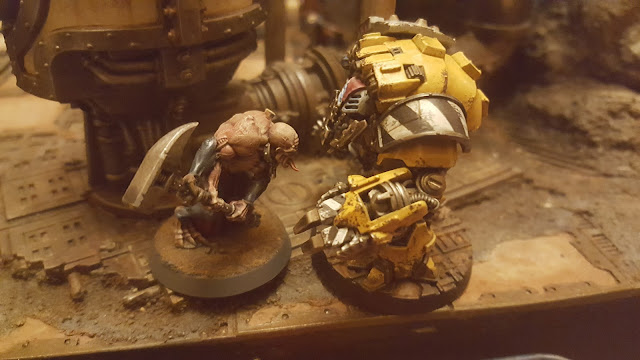 ....miraculously Mongo made all three saves! As Ju-Ju struggled to process this information, Mongo swung back, smashing the Ambot to the ground and taking it out of action! 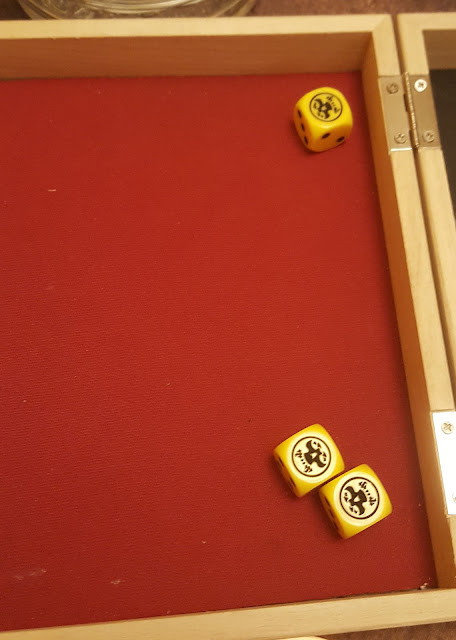 With the Kindred's attention focused on the left and centre, a lone Escher ganger had made her way up the right and had sprinted along the corridor towards the elevator. All Calypso needed to do was survive the inevitable fire power that would come her way and work out how to bypass the locks. 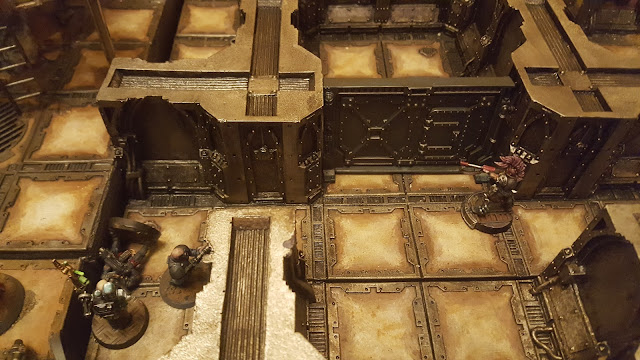 Realising that they were close to achieving their goal, Inquistor Dragosani charged Deimos in the centre, taking out the Acolyte with his stiletto sword. 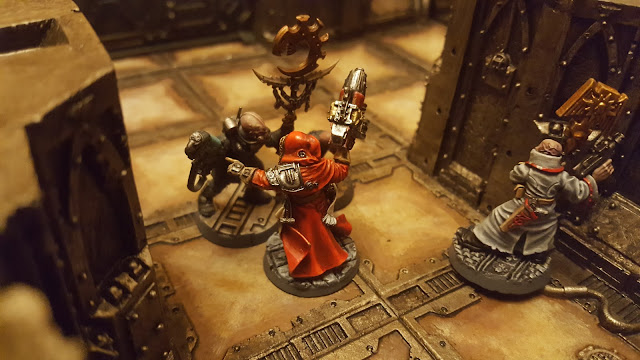 The young juve Jinx ignored her leader's warning to stay back and instead charged the Aberrant holding the right flank. The juve wounded the beast but was unceremoniously smashed to the ground and taken out of action. 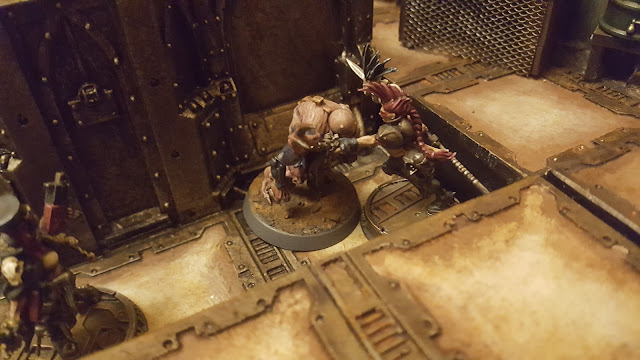 Shots ricocheted around Calypso as she fiddled with the locked controls for the Elevator. The Escher ganger had picked plenty of locks in her time and despite shells buzzing around her like a swarm of angry Skeetas, Calypso opened the door and ducked inside the elevator leading down to Black's laboratory. 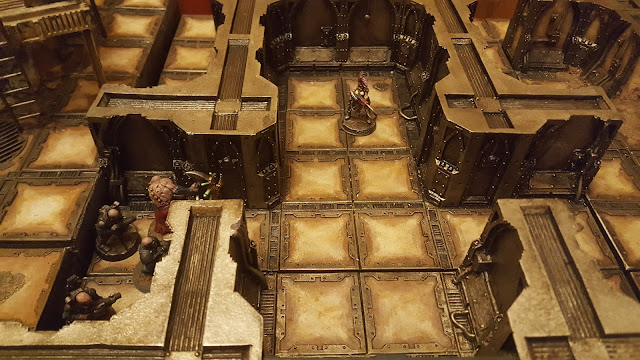 With their objective lost the Kindred fell back. They had taken four casualties but had inflicted six casualties on the Voodoo Dolls. Both Rogue Docs had survived however so the Doll's would start the final game with 5 in reserve and the Kindred would have three in reserve.