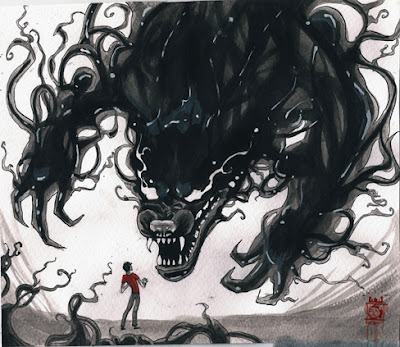 It's no secret that I've been somewhat disillusioned with the direction GW have dragged 40k in. It's pretty much a free for all these days, and whilst freedom to do whatever you want can be a liberating experience, it can quickly become tedious when it becomes the norm. As a 'Fluffhead, the background has always played an important part of the game for me, so when I see Grey Knights allying with Daemons or Thunderwolves with Flying Hive Tyrants, I think what's the point in tournaments?


I'm not against allies, I just think that GW have implemented them so badly that they make a mockery of tournaments or the competitive side of the game.....from a background perspective anyway.
Because of this, I've generally stayed clear of tournaments since 6th edition was released.....I mean what's the point of tournaments when the game revolves around stacking Universal Special Rules to the detriment of the background?
Well.....the point is, is that tournaments can be damned good fun! It's a chance to get together with old mates or make new mates, have a drink and a laugh, look at some really cool models and share tales of crushing defeat and glorious victory.....tournaments are all this and more!

So with this in mind, I've decided to enter the UKGT with my brother in sin, Steve.
The UKGT is a pretty hard core event held over several heats (4 this year) with those finishing in the top half qualifying for the final. The rules pack for this year is pretty open, allowing for just about anything to be taken. The main points being:

It's going to be a brutal event with no quarter given, so the question is what to take?
I have an Eldar army that could be easily made into a 7th edition competitive army. 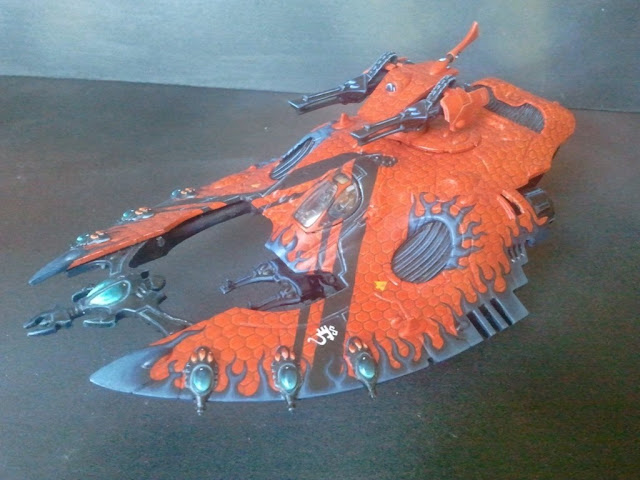 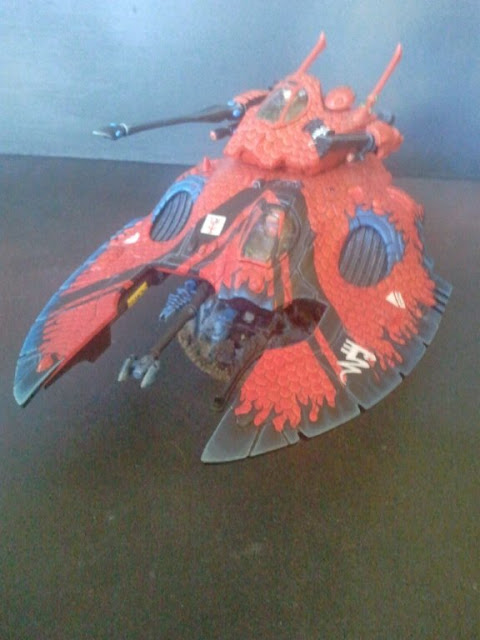 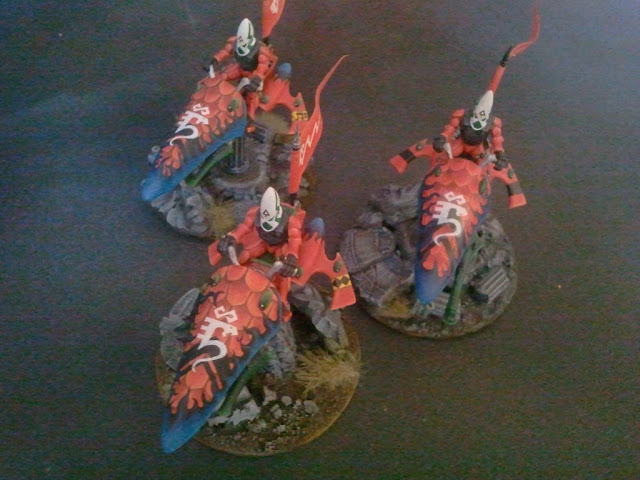 I stopped playing these when GW released their previous Codex because they were too over-powered. They've become bloody ridiculous with their latest release, and quite honestly, I'd be embarrassed to use Eldar these days, so they're out.

My other army is Sisters of Battle, that I used all through 5th edition. Damn I miss these girls, they had lots of cool rules and in the right hands could take on just about anything. They even took me to Germany playing for England at the ETC for a couple of years.... 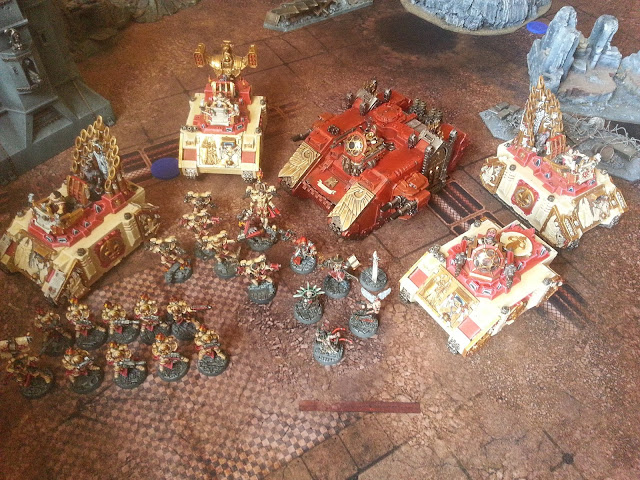 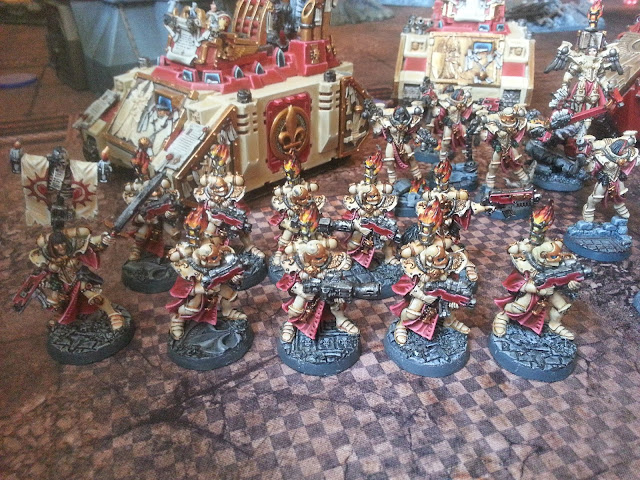 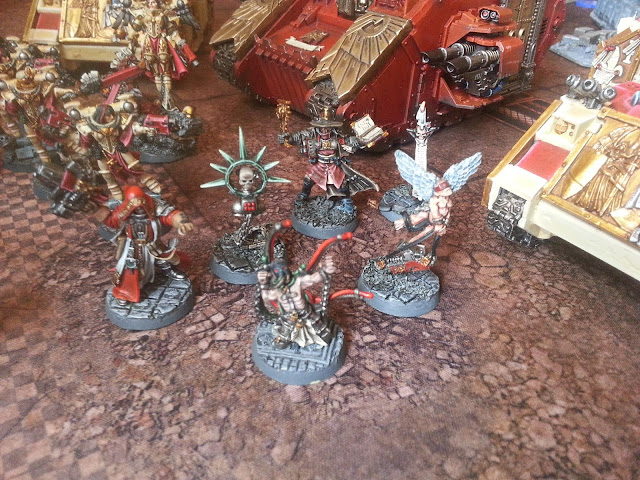 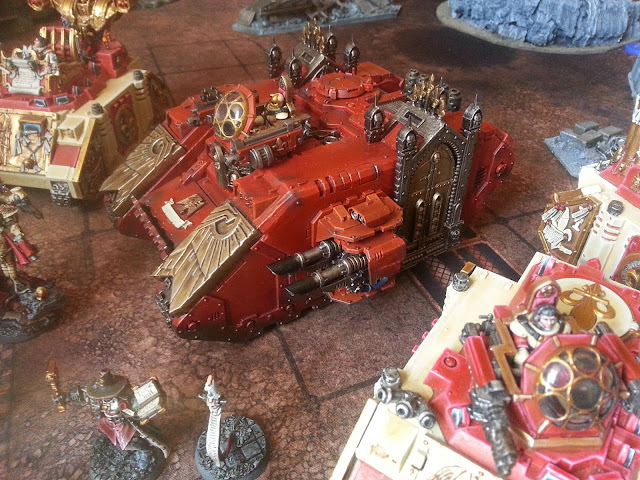 .......Of course, this was from when they were known as Witch Hunters and had an interesting and entertaining Codex. Since then GW decided that their rules were too complicated and decided to turn it into the most bland Codex possible ;-) .....so that's them out then.

I don't need to tell anyone that the Chaos Space Marine Codex is the weakest Codex out there at the moment. Taking them to such a cut-throat event would be suicide wouldn't it? Well yes, but where there's a will, there's a way. Time to look to our allies.....unfortunately the no 'Come the Apocalypse' hurts Chaos more than other army out there. It pretty much just limits me to Daemons or Renegades and Heretics from Imperial Armour 13. I'm not a fan of Guard, so that just leaves Daemons.

Fortunately, I've always liked my Daemons. I have plenty lying around the house just waiting to be summoned to aid the Castigators in these times of need.....unfortunately, hardly any of them are painted...hell....most of them aren't even built!
Still, Heat 2 of the UKGT isn't until October, so that should give me plenty of time add an allied contingent. I'm going to start off small and add a couple of units of Daemonettes (18 nettes in each unit). I have 18 painted up from the good old 3.5 days, which could do with some touching up (behave), but they can wait until I get the rest of my allies sorted. 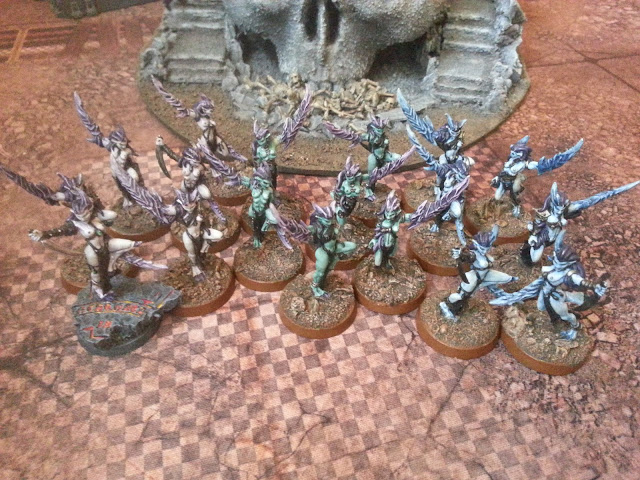 For the leader I'm trying out the Masque, who I'm hoping to use to slow down Thunderwolves and knock Flying Hive Tyrants out of the sky with her Dance of Caging (unit within 12" may only move, run or charge D3" until the following turn). I had a game against my mate Neil's Khorne Daemonkin army this week and she proved quite devastating in neutering a unit's abilities.....unfortunately Neil also had a Greater Brass Scorpion that chomped through my entire army ;-)

I also tried out 20 Furies with the mark of Slaanesh and these proved to be very effective for a measly 165pts. They're incredibly fast with their extra 3" run move and fleet, but it's their rending ability that really makes them shine. So today I've been building some Slaaneshi Furies to add to my allies.
They're a really simple, if somewhat expensive conversion (they need to be if I'm building 20 of them ;-) ). Plastic Daemonettes with plastic Tyranid Gargoyle wings, I'm quite happy with they've turned out. 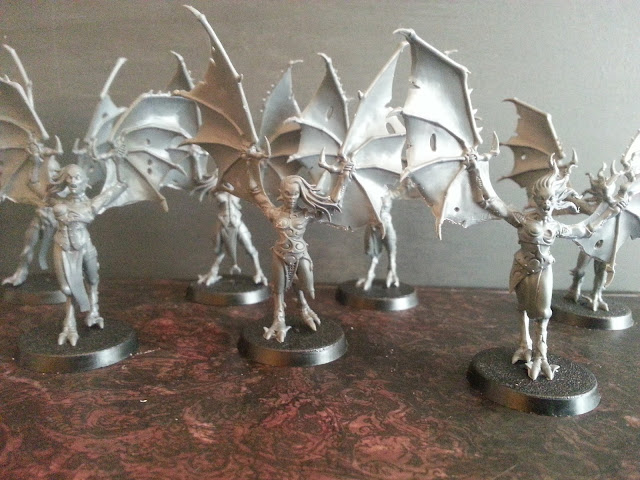 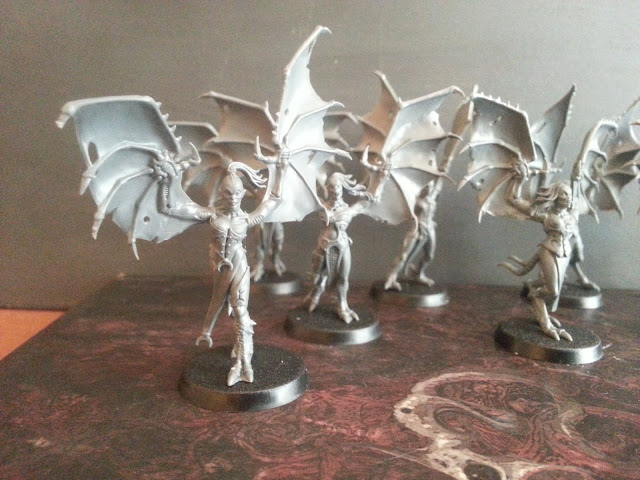 I've managed to get 10 built this afternoon, so hopefully they'll all be built by tomorrow. 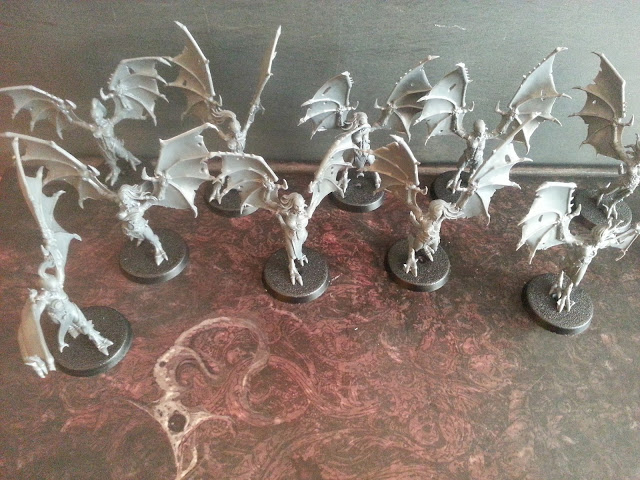 So expect to see a strong Daemonic element on the blog for the next month or so as I ready my allies for Heat 2.....unless of course the organiser get's back to me and okay's it for me to use a Chaos Warhound Titan.....but that's another tale altogether ;-)

Until next time.....may Our Lady grant you her number!
Posted by Castigator at 10:19