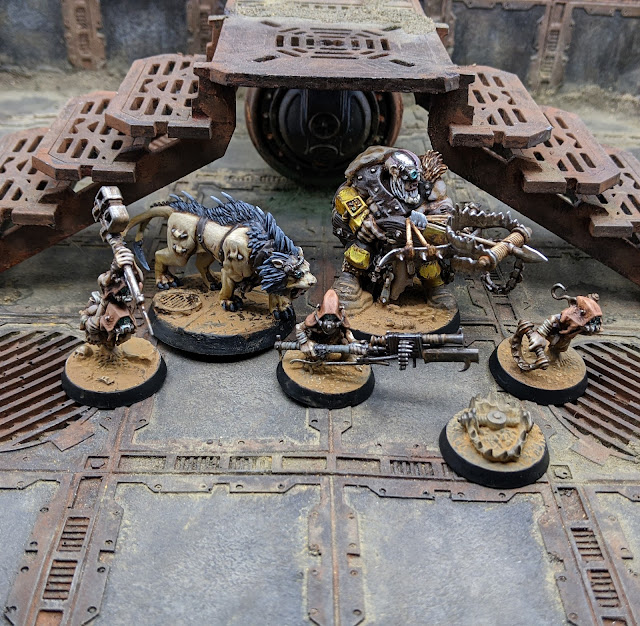 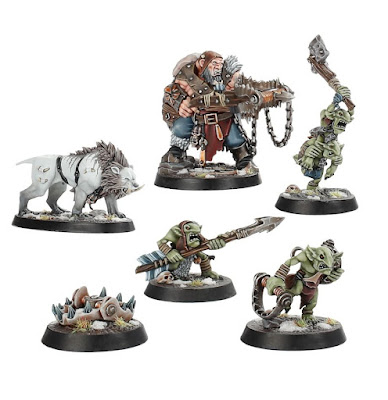 A while ago I bought Hrothgorn's Mantrappers with the sole purpose of creating a Khimerix for my Escher gang. After rapidly coming to the conclusion that the Khimerix is bloody useless I shelved the idea but I really liked the models and a seed was planted on how I could use them as adversaries/NPC's for our games.

Nobody knows the origins of the Shepherd. Many believe him to be an escaped slave from the Forges, what little armour he wears certainly adds validity to this theory but his lack of limb augmetics casts some doubt. Others claim he's a Militia deserter from the Dust Wall as evidenced by his use of ranged weaponry. Where ever he's from, he's made his home deep in the Badzones and he's here to stay. 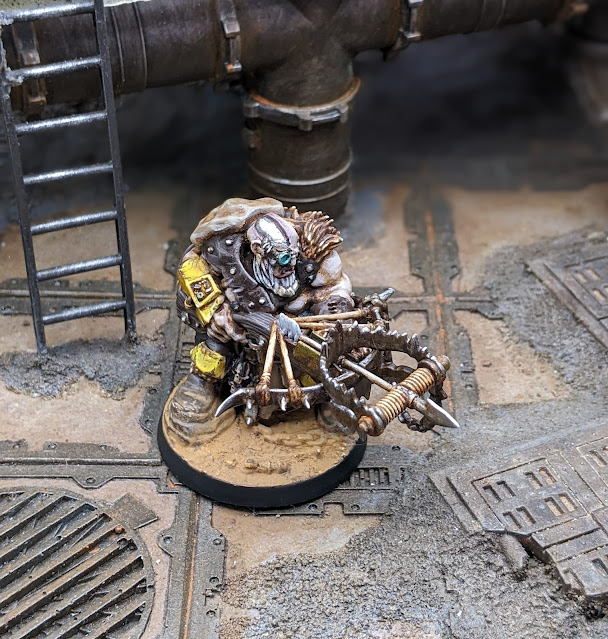 Rob asked for a quick tutorial on how I painted these models so I thought I'd share it on here. Because they're adversaries/NPC's I didn't want to spend too much time on them. Here's how I went about it.
The model was given a quick base coat. I wanted to limit the colours on him so I stuck to similar colours, Rhinox Hide and Dryad Bark were used for the leather and wood. 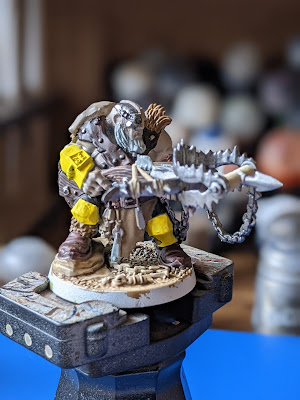 Rakath Flesh was used for the skin tone and a yellow for the armour. 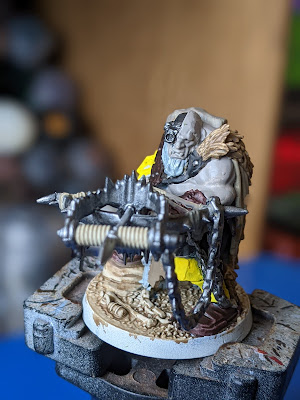 Steel Legion Drab was used for the fur and any metallics were coated in Lead Belcher. This took around 30 to 40 minutes. 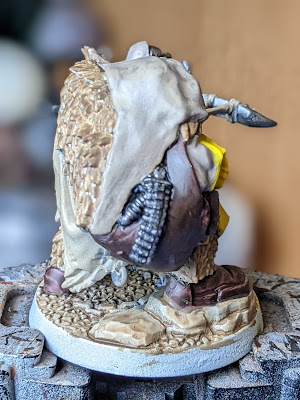 Next I mixed up some Burnt Umber Oil colour with a drop of White Spirit...or Gunk as I like to call it. 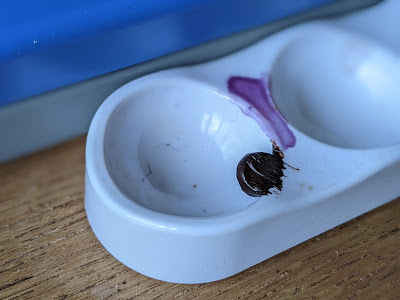 I slathered it all over the mini....well and truly gunked, yuck! 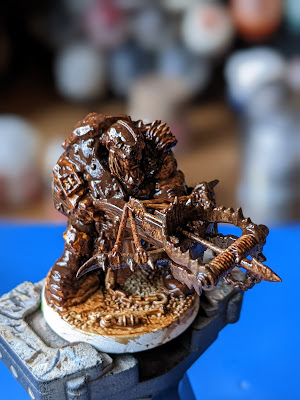 I then used a cotton bud dipped in White Spirit and wiped some off. 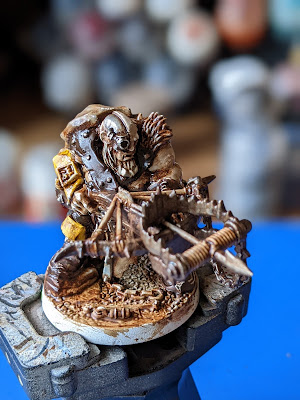 The result is quite remarkable. It's not perfect but it's a good start. 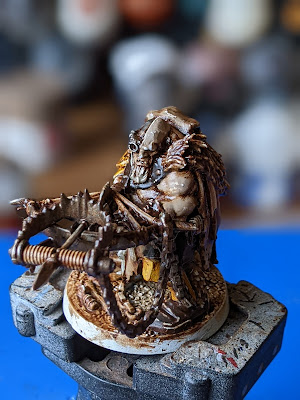 It works better on some areas than others. I particularly like the effect on the fur and cloth. This took around 10-15 minutes to apply and wipe off, so I'm around the hour mark. 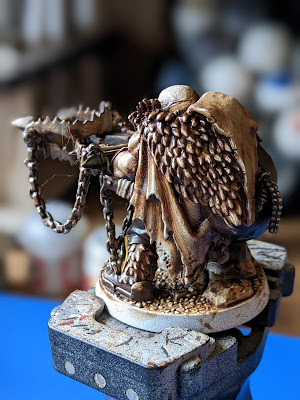 I then spent around another 2 hours touching up areas with the base colours and adding a few details. 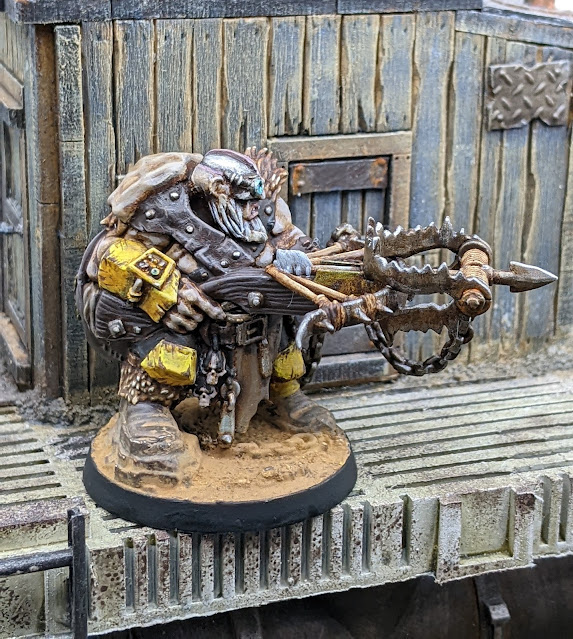 I didn't even retouch the cloth or fur as I like the effect. 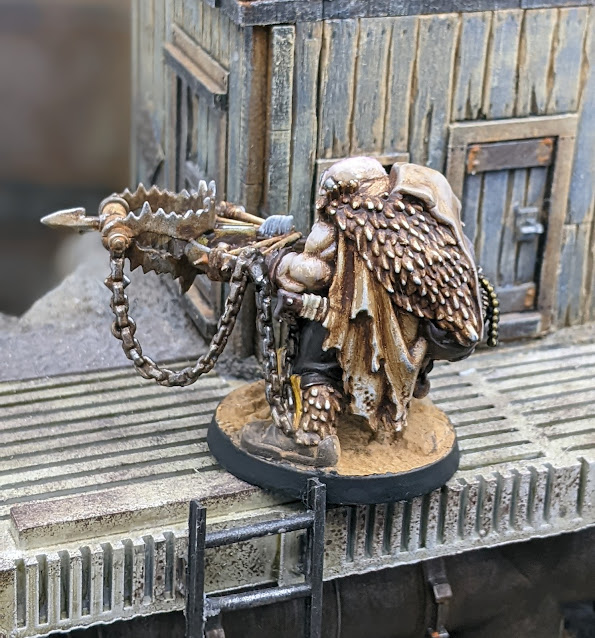 A few scratches to the leather were added and the hide was retouched but nothing major. 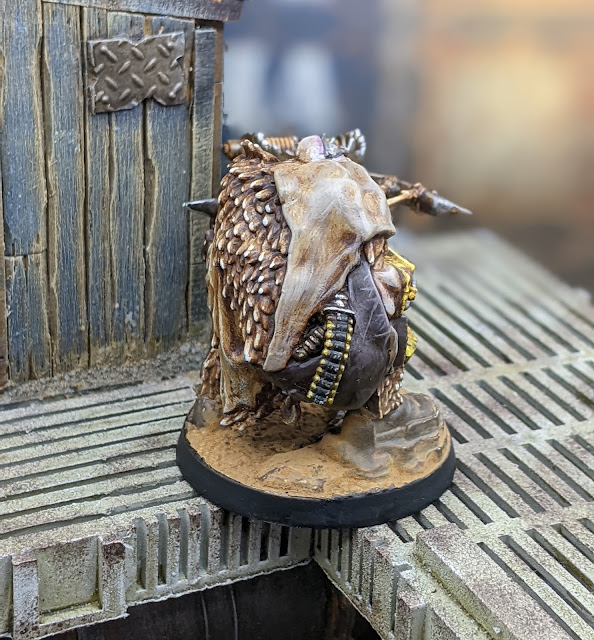 For a model painted in less than 3 hours I'm more than happy enough with it. 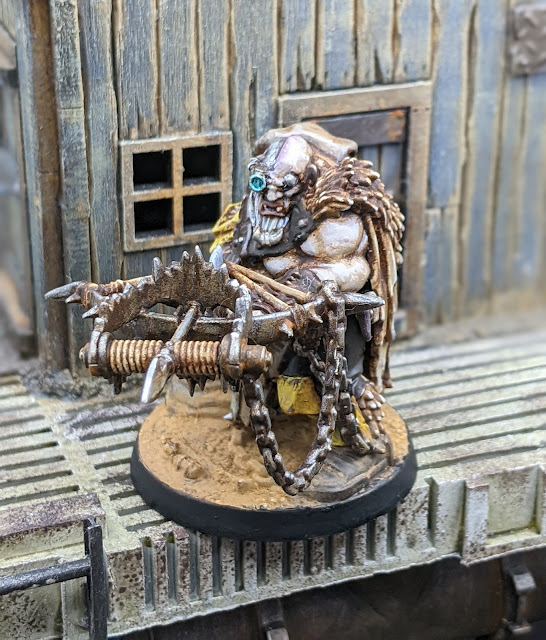 And the beauty is I can always go back to him and add more detail....I won't though 😉

The Khimerix received the same attention as his master. 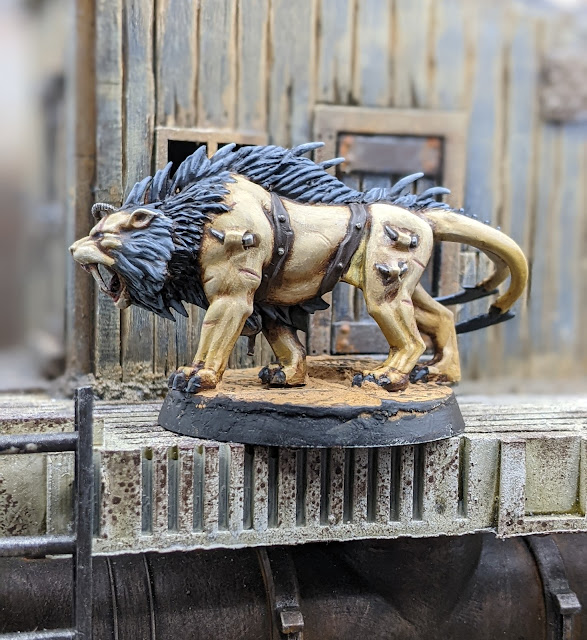 The fur was painted after the model had been Gunked. 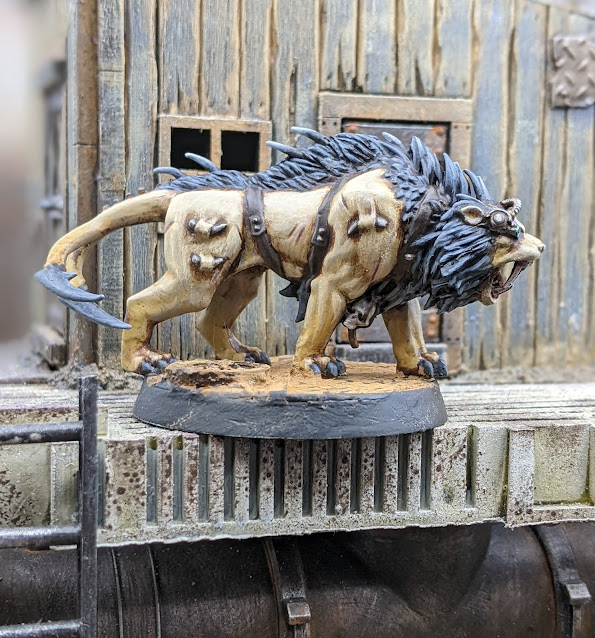 I still haven't thought of a name for him yet.... 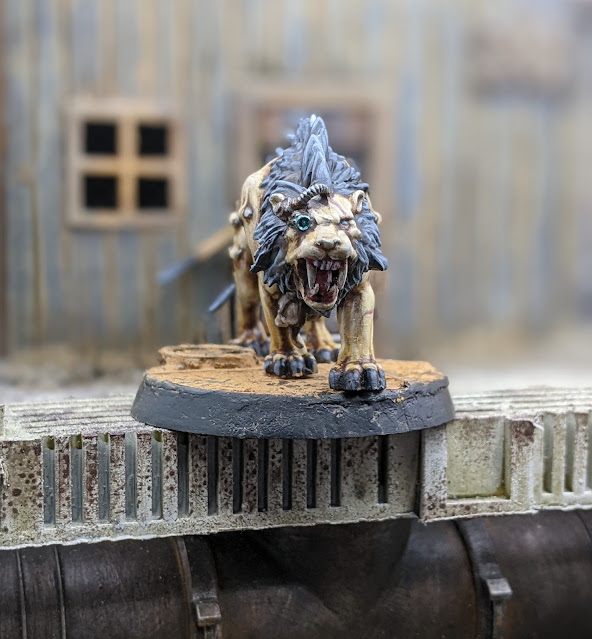 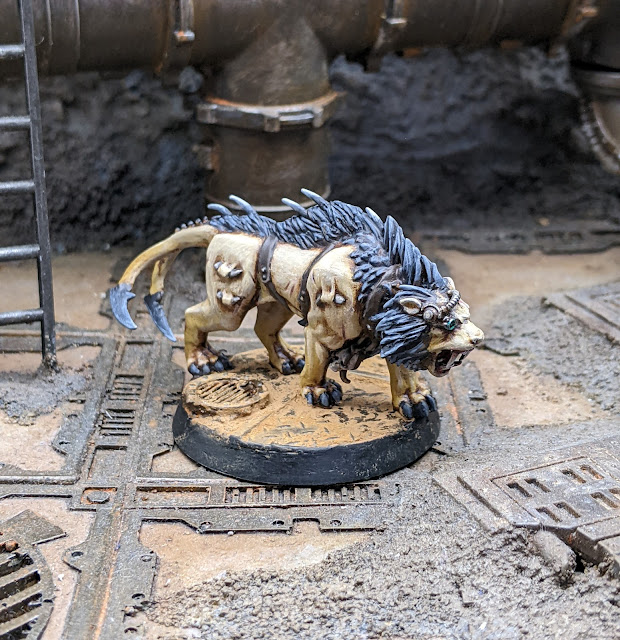 Like their master, nobody knows the origins of the Imps. Many think they're Mutants, some say that they're some off world xenos species that proved too mischievous for their uphive noble owners. Others claim that they're Caryatids that have had their wings clipped. What is known as that they have undergone a drastic procedure at some time in the past and despite their diminutive size they have proven more than capable of defending their homestead. 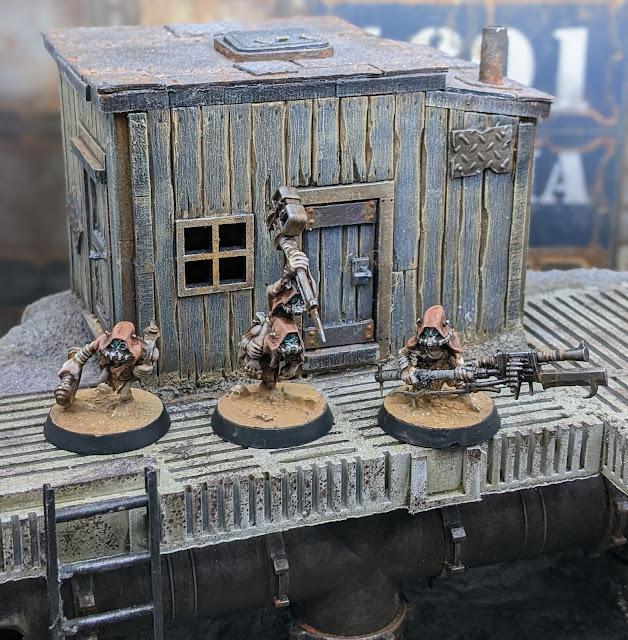 Bish and Bash
Armed with a Spud-Jacker, these two Imps are surprisingly dangerous in combat. Their preternatural reflexes have undone many an adversary. 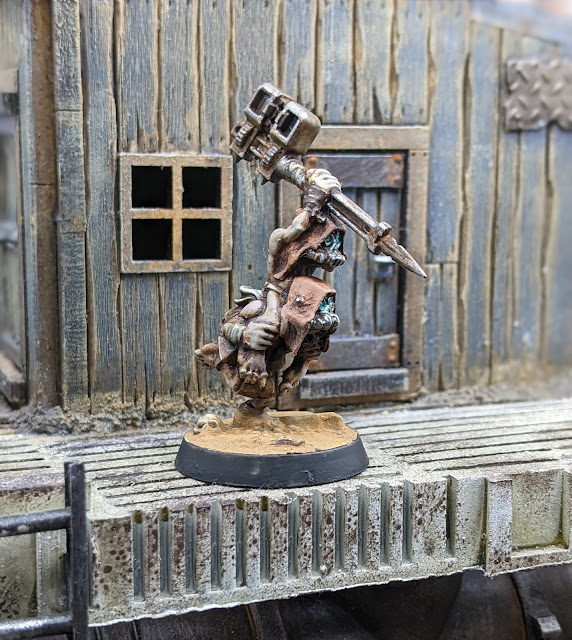 Mr Boomstick
This Imp is rightly feared with his Polearm Blunderbuss and his diminutive size making him difficult to spot until it's too late. 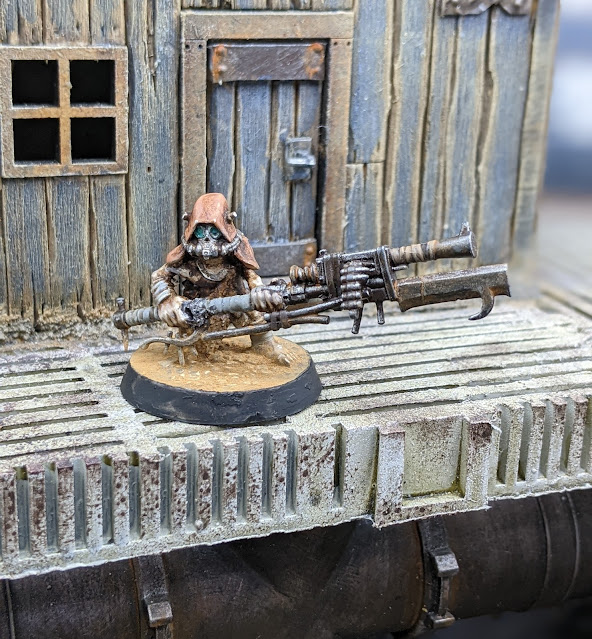 Trip-Trap
Trip-Trap is the most devious of the Imps. His booby traps have deterred many an interloper from searching for the oasis. 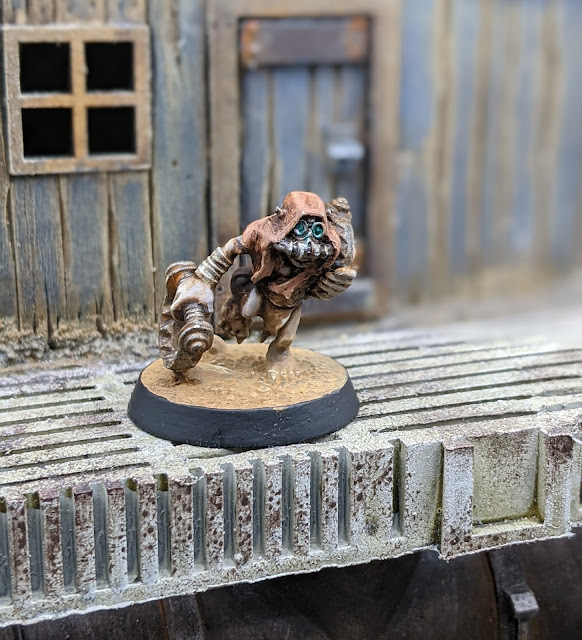 The Imps have proven to be a surprisingly dangerous foe. 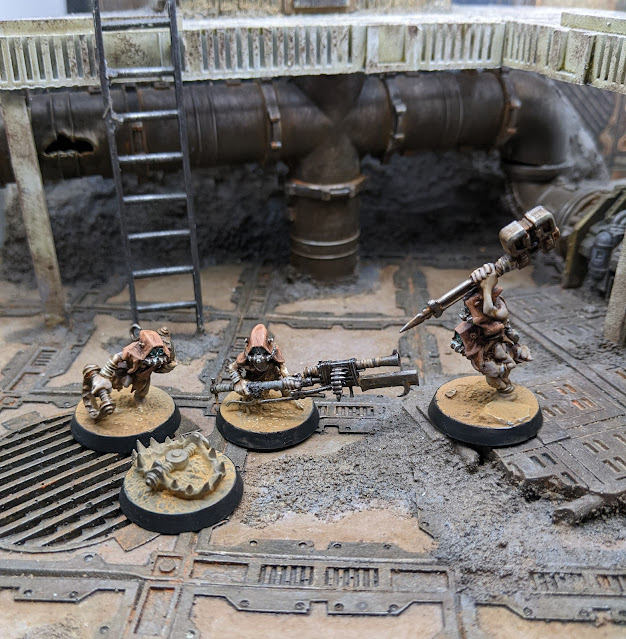 If you find yourselves in the Badzones, give a wide berth to the Shepherd and his Flock. 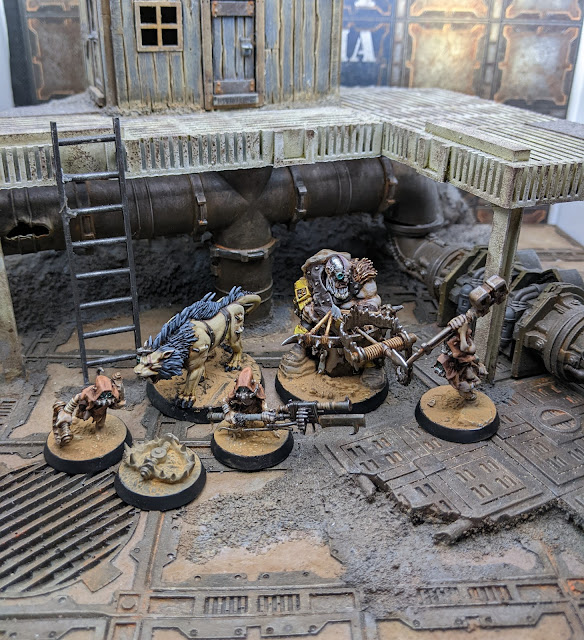