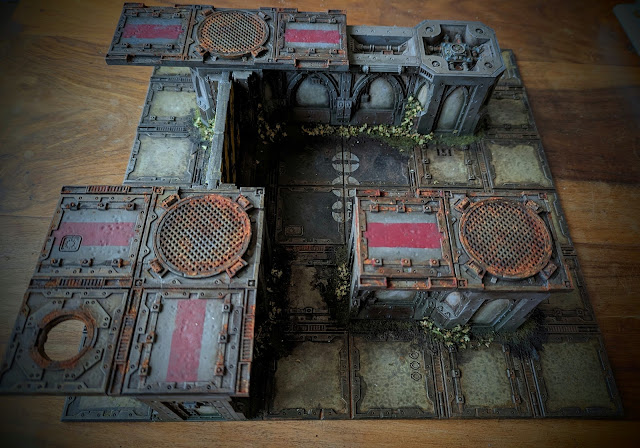 It's been a while, way too long really but I'm still here enjoying the hobby. Most of my time has been spread across several projects which has meant that I've finished nothing!

As readers who have been here before will know, I have more than enough terrain tiles to build a 6x4 Sector Mechanicus board...notice I didn't use the phrase regular readers there? That's because there has been very little regularity on the blog of late 😉.

With all the terrain I already had I felt that I really didn't need any of the Zone Mortalis plastics when they came out. I resisted the urge to splash out on the Dark Uprising set and after 8 months I congratulated myself on my ability to say no to GW and overcoming the fear of missing out....
and then I let my guard down and went and bought it...damn you GW with your irresistible grimdark!

I already had 5 of the original Forge World tiles and it was while I was slapping a quick paint job on these that a thought struck me...no, not the one where I wished I had bought another set of 4 FW tiles for what turned out to be the bargain price of £100...but the idea that these tiles would be perfect for a dungeon crawler.
I've always loved dungeon crawlers, be they board games or computer games. This is evident in our Necromunda games where we always incorporate elements from dungeon crawlers or RPGs. Our gangs often set aside their differences to achieve an objective or to just survive their encounters and we both enjoy our games more because of these confrontations.
It was the idea of a Dungeon Hive Crawler along with needing another 4 tiles to build a 3x3 tunnel board that made me succumb to the Dark Uprising set.
I told Rob I'd bought the Dark Uprising set and he immediately bought the tiles and the Gang Stronghold set to compliment it. We discussed the idea of keeping them at a single height and Rob agreed it would make for a different feel to our usual Sector Mechanicus games. This worked out well because it meant that we had enough walls to do 4 tiles.
Rob gave the floors a quick spray coat and then flooded them with water with dabs colour to add some interest. I sprayed the walls with a cheap grey rattle can and then picked out a the panels with a cream colour. I then covered them with Burnt Umber acrylic oil paint before wiping it off with a rag to leave a reasonable effect....and then.....
....then...I left it.
I turned my attention towards building and (barely) painting an Orlock gang (amongst a couple of other projects) and we continued our games of Necromunda using Sector Mechanicus and our serviceable Zone Mortalis boards.
It was while we were playing one of our Zone Mortalis games that I happened to mention the idea of a Dungeon Hive Crawler to him. Rob was all over the idea and so we switched from our many projects again!
I quickly designed some basic rules and blacked out the centre squares so I could number them. Of course once I did this I realised just how basic the paint job was and I started adding a bit more detail. The first photo shows the start that I've made and although there's a way to go, the basic work that we've already done on them should mean that it's a relatively quick process....Hopefully 😉 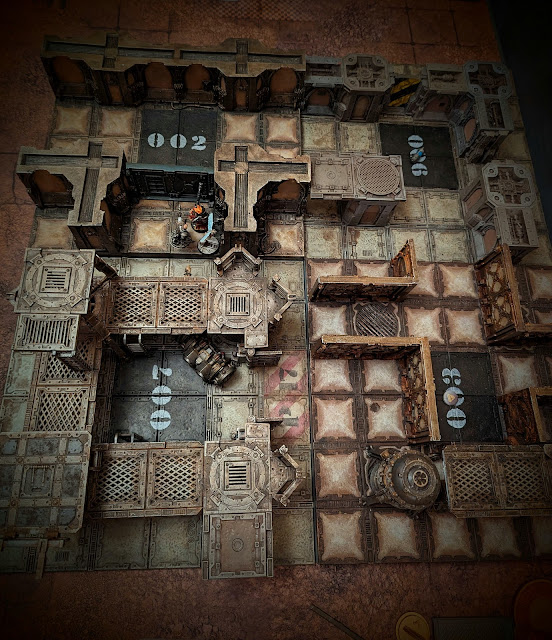 As for the rules? Well, we've played 4 games so far and we're on version 3. The furthest we've got so far is four tiles in before the gribblies have overwhelmed us. Once we've balanced it out a bit more I'll share the results.
Until next time....May the Hive Spirits watch over you! 😉