Voodoo Dolls updated...and a case to put them in. 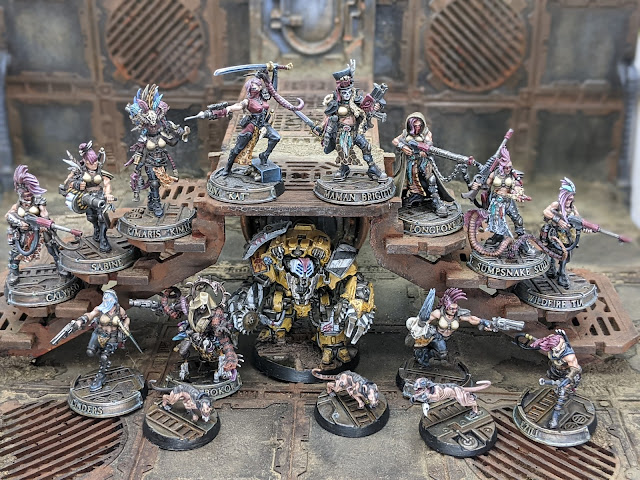 With the release of the Escher House of Blades book, it quickly became apparent that I would need to redesign my gang (as would Rob with his Goliaths). After several play testing sessions to get a reasonable balance between the gangs we both settled on gangs that we thought were interesting and fun to play with and against.

Here's what happened to the Voodoo Dolls...

As some of you may know, Rob and I play a more Narrative/Skirmish style of Necromunda (at least until we have built all of the gangs and then we'll try out a dominion campaign). We have a system that works for us and I'll quickly go through our gang building rules (this is mainly for me and Rob so we have a reference for future gangs).

We both think pets look cool but they're bloody awful rules wise so we've added a rule to allow us to use them:

We have more House Rules but these are the basic guidelines for how we build our gangs. 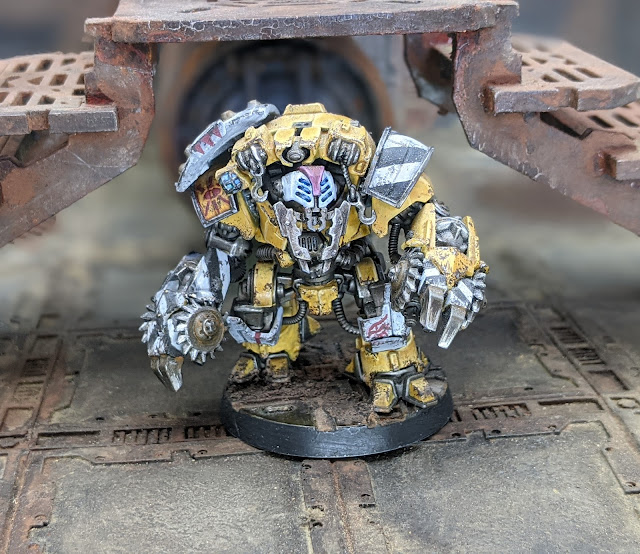 During our play testing games I tried using a Khimerix instead of the Ambot but despite my best efforts it quickly became apparent that it was too expensive for what it achieved (a basic Goliath ganger could take it down in combat) so I went back to the trusty Ambot Ju-Ju.
Another mainstay was my helpful Rogue Witch Doc Dahn Bokor. 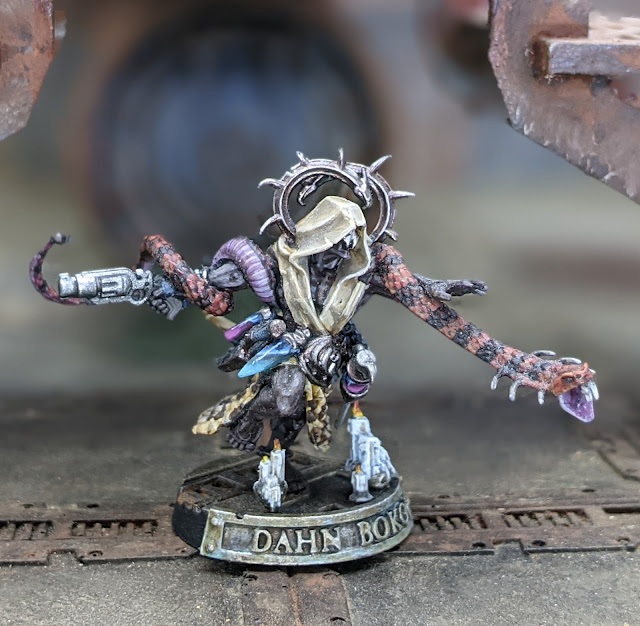 There was a promotion amongst the ranks and Longpoke Kari became a Champion..... 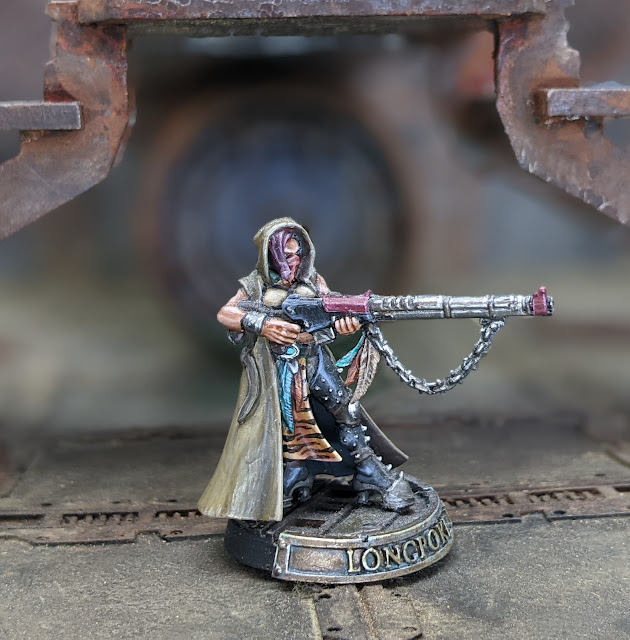 .....Unfortunately that meant a demotion for Kimaris or Kimmy to her friends. This was because Escher gangers no longer have access to a Long-Las in their ganger list and as I was running two, one of them had to go. It was easier to convert Kimmy than Longpoke so a little restructuring occurred. 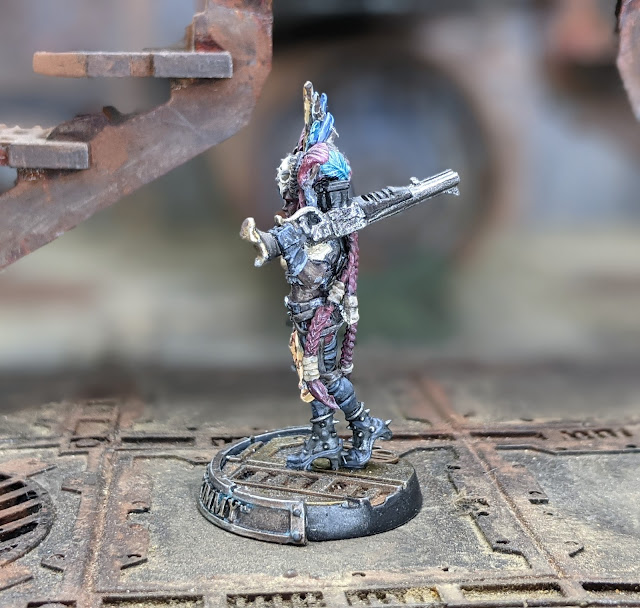 Kimmy's Long las was removed and I gave her a Shotgun with acid ammo. This was a reasonably quick alteration and it helped her keep the lithe profile that she had before. 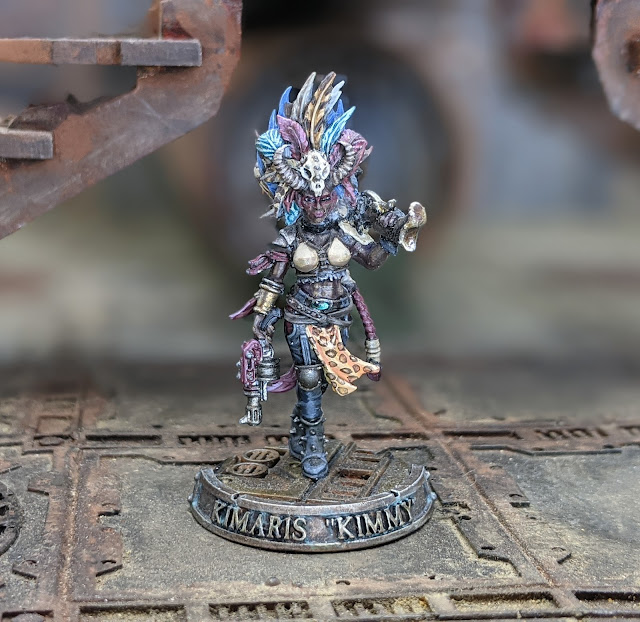 The other champion Kat was originally a Death Cult Assassin in my gang's background so it seemed appropriate to use her as a Death Maiden - She terrifies Rob so much that she rarely makes it into combat now 😂. She lost her Stiletto Sword and Chem-Synth but she can still dish it out if she makes it into combat. 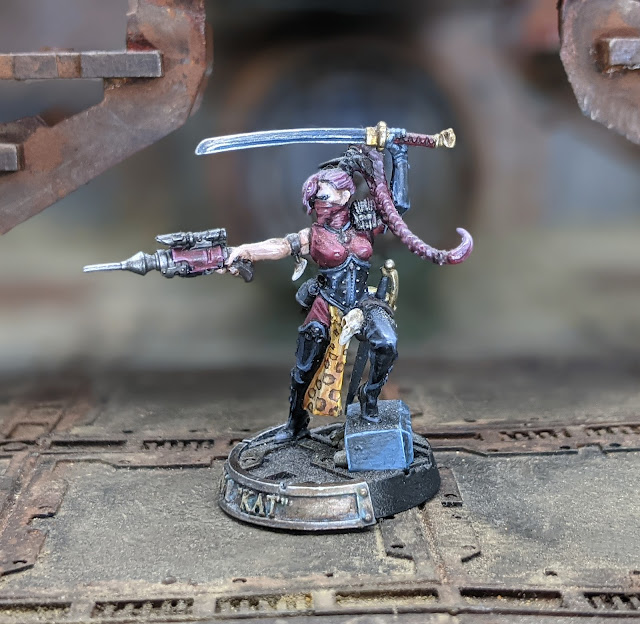 With the new rules for the Phelynx, Sumpsnake Sully had to lose her pet snake. The snake is now part of her base and 'counts as' a Stiletto knife. I'm happier with this because the House Rules that we came up for her seemed a bit clumsy....and she's still my favourite character 😉 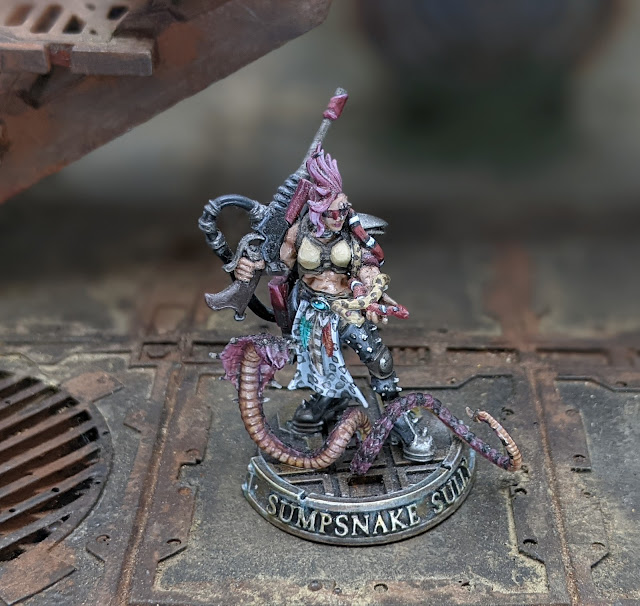 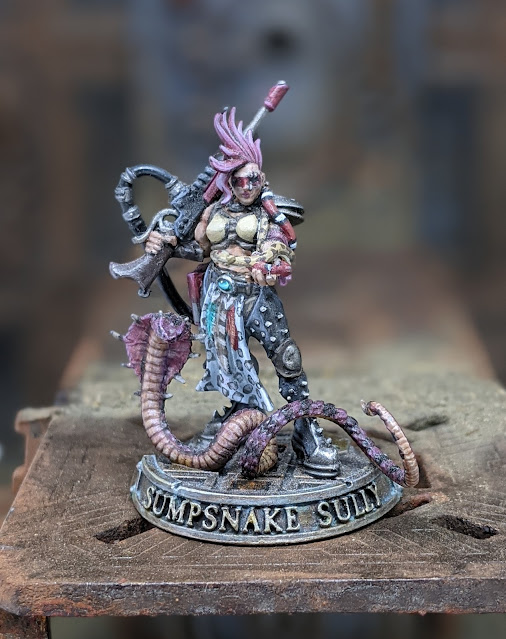 Maman Brigitte didn't escape the chop either. Her Power Sword was replaced by a Stiletto Sword.... 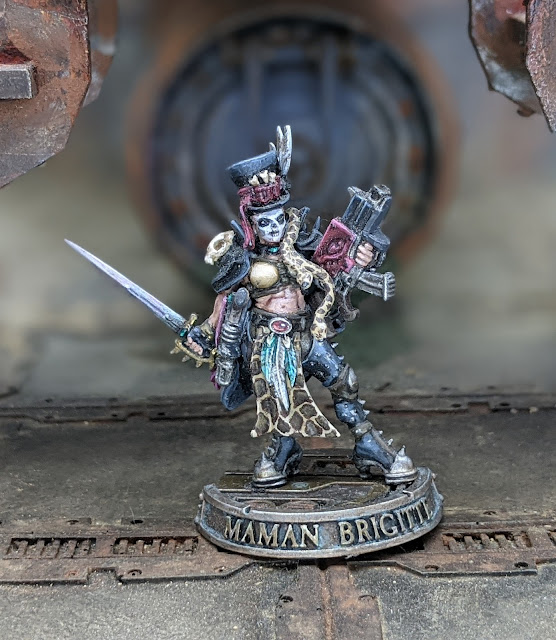 ...and her Needle pistol was down graded to an Autopistol - Times are hard in the Sump Swamps of Rockridge! 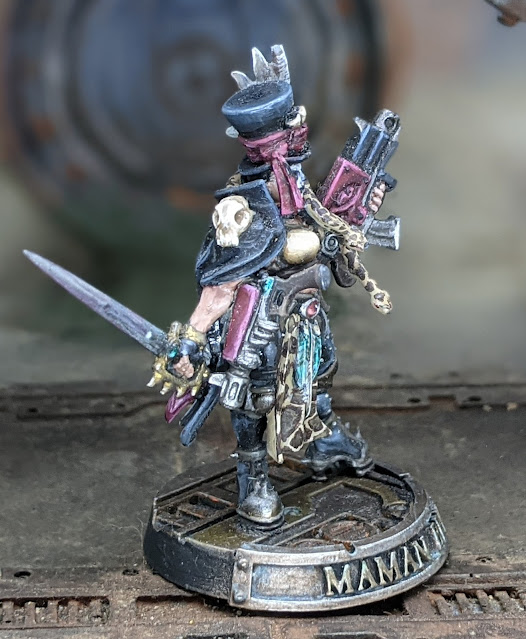 Sabine (the hero of Rockridge) saw a radical change. She handed over her shotgun to Kimmy and picked up a Grenade Launcher. 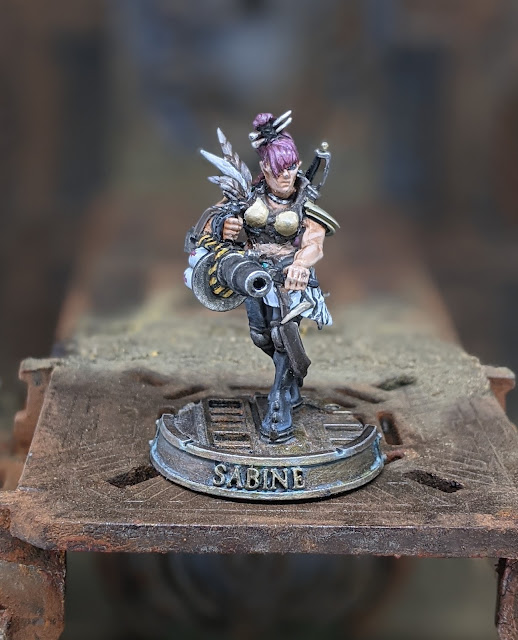 I initially stayed away from this weapon and trialled a Needle Rifle instead. It proved to be ineffective against Rob's Goliaths (despite him toning down his gang) so I tentatively tried the Launcher instead. 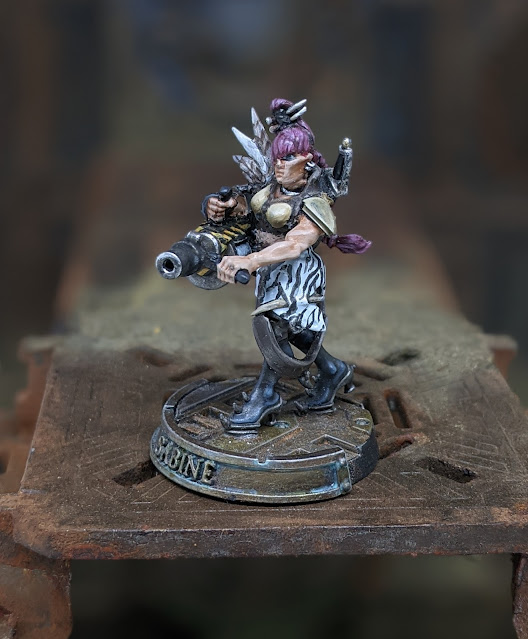 The result was remarkable! I didn't think one model could swing a gang's fortunes so drastically! I added Smoke and Photon Flash Grenades to her and while she might not injure her opponents like she did before, she has become a very versatile character making it much easier for the rest of the gang to achieve their goals. 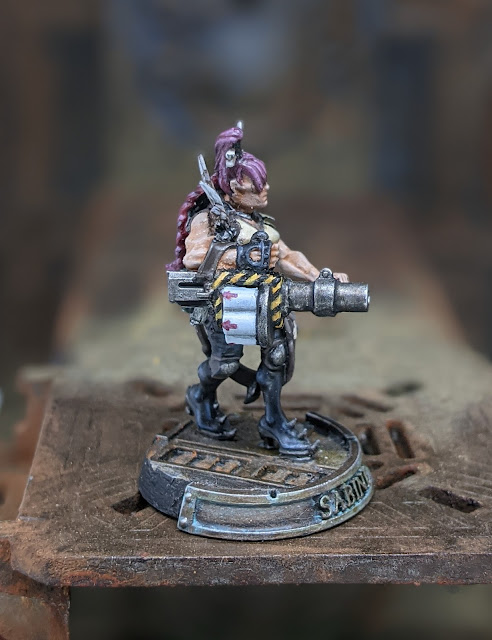 Next up was Cinders. In the new book Juves can no longer take hand flamers so it was back to a Stub Pistol for her. As I was replacing her arm I damaged her ballroom mask and had to replace her head. I opted for the Death Maiden head with the veil (to recover her hideous scars), so what I thought would be a very quick fix became a bit longer than anticipated. 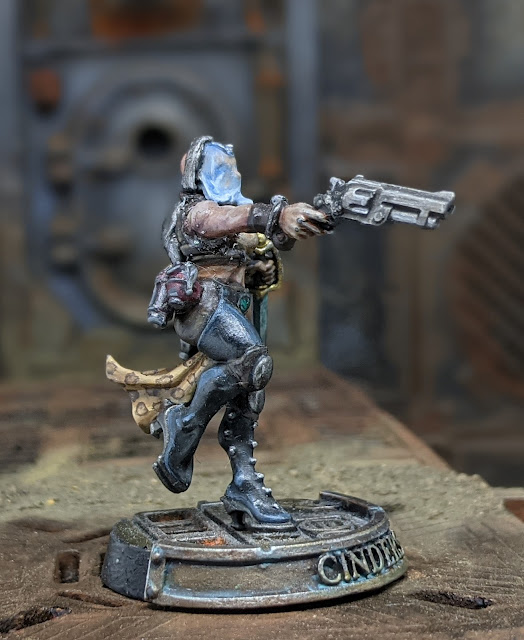 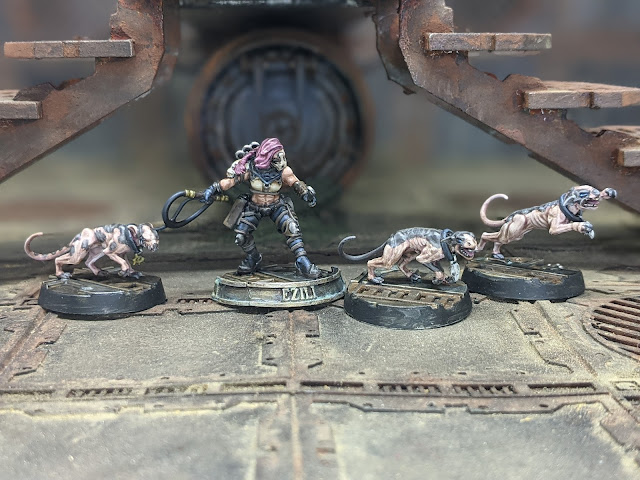 Like many of the Voodoo Dolls, Ezili comes from deep within the Sump Swamps of Rockridge. Ezili's uncanny ability with her destruction of Phelynx appears to be a family trait similar to her biological sister Sumpsnake Sully. 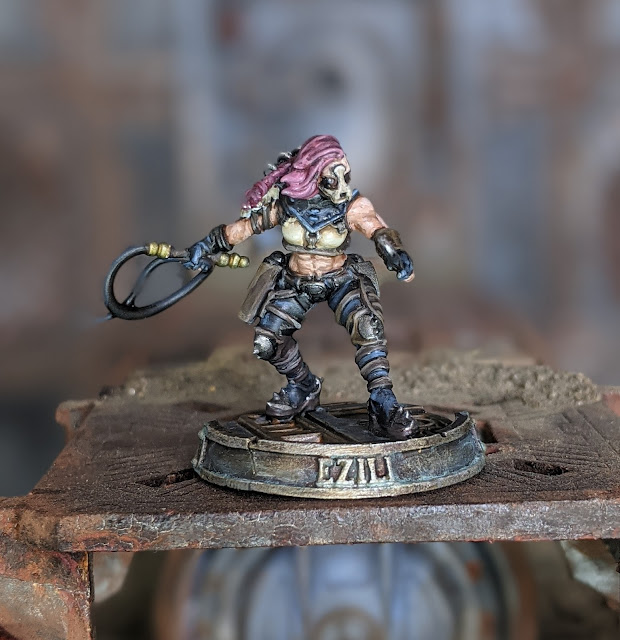 Armed with a whip, Stub Pistol and Throwing Knives, Ezili is a formidable fighter on her own for one her age... 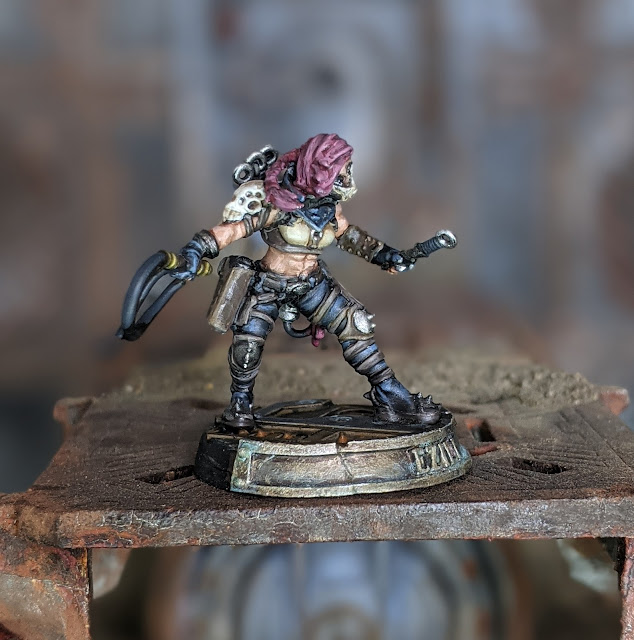 ...but with her destruction of Phelynx she can be a danger to the hardiest of foes. 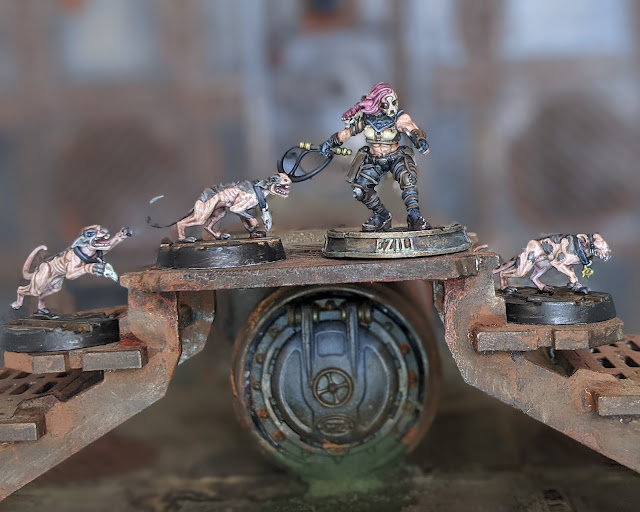 Even her gang sisters have learnt to give a wide berth to Lola, Lexi and Luna when their hunting instincts takes over. 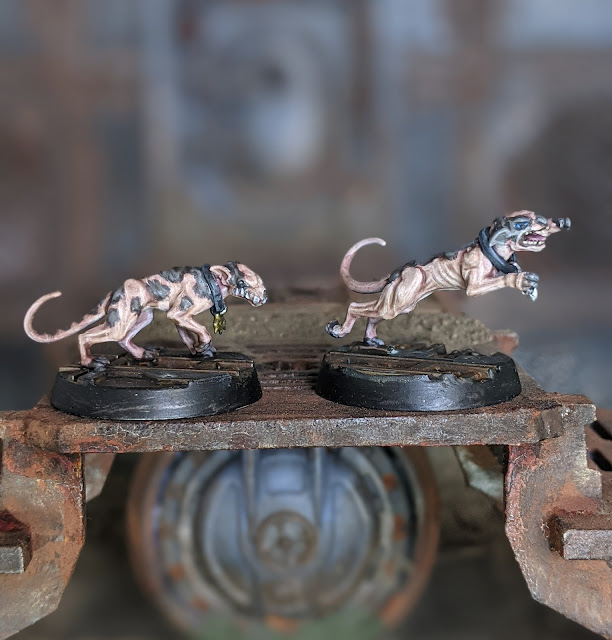 I wanted my Phelynx to appear more cat-like than lizard-like so I removed their lizard-like crests... 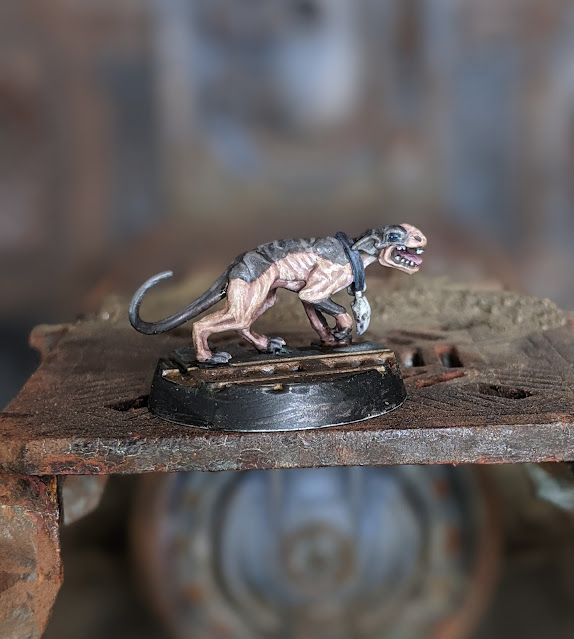 ...And painted them similar to the hairless Sphynx Cat.
These were fun to do and while they add more character to my gang, I'm under no illusions that they look more impressive than they are effective on the tabletop. 😉
With the gang finally complete I decided to build a quick and dirty storage case for them from a tea caddy box that I had. 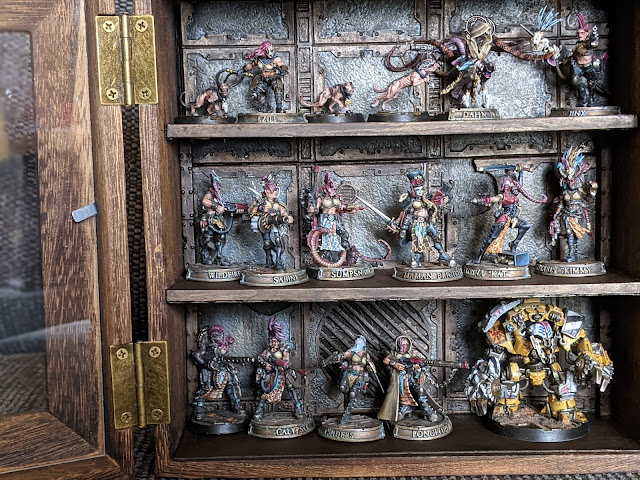 The platforms have 'metallic paper' on them and I've magnetized all of the gang's bases. 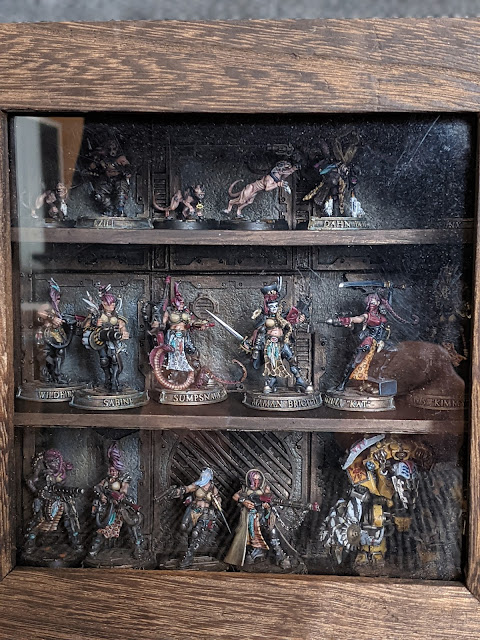 It's produced a good balance between 'models falling over when knocked' and 'models snapping when trying to get them off'. I wouldn't want to put it in gaming bag and let it get knocked about but it's fine for carrying them around the house or to the car for a trip to a mate's house 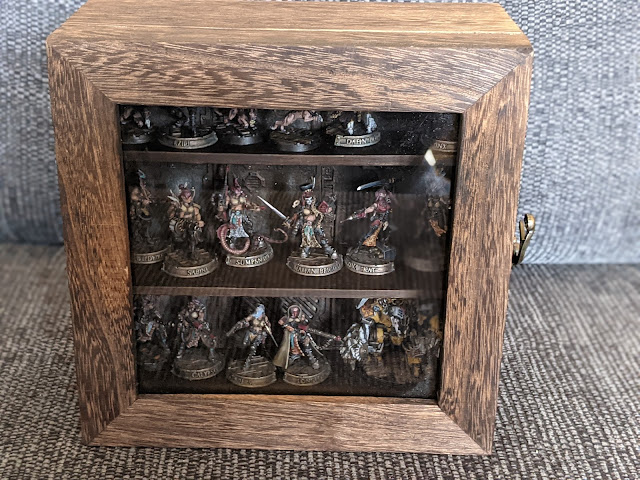 So that's it for the Voodoo Dolls, I can now focus on something else safe in the knowledge that they're finished....although now I think about it, they've recently gained enough reputation to add another Hanger-On to their ranks....bugger! 😉
Until next time.....may the Hive Spirits watch over you! 😉
Posted by Castigator (Gary) at 06:50