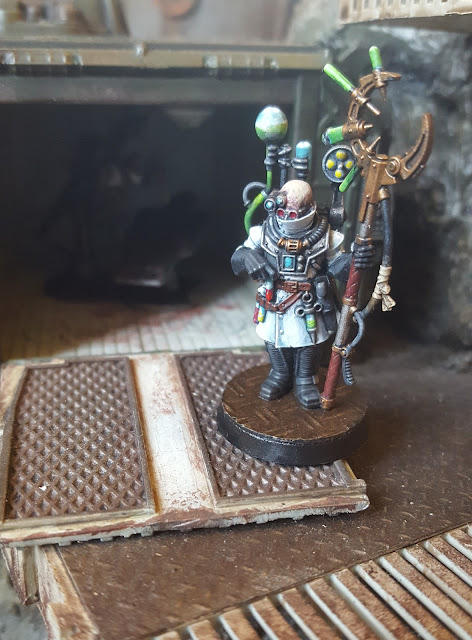 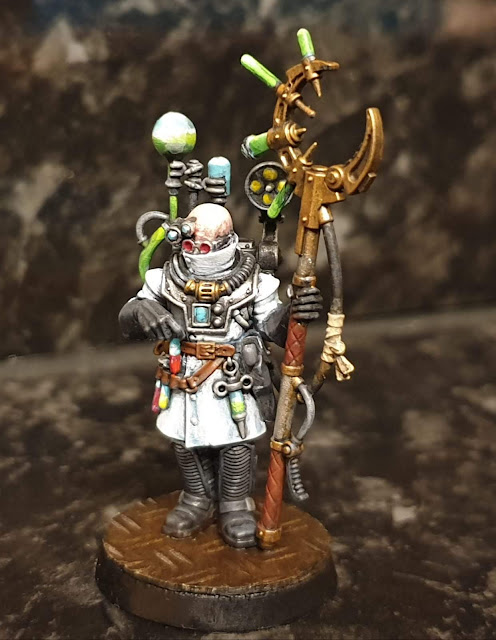 Greetings Workers!
Rob has been busy with his Necromunda Genestealer Cult and has recently finished his Rogue Doc for them. I'm sure you'll agree with me that Rob has done a fantastic job on the Biophagus.
Inspired by this wonderful model, an idea formed about how we could make the most of his unique abilities and introduce them into our Perpetual Rockridge Campaign.

The Dominion Campaign that we're playing is more of a loose Perpetual campaign than a strictly adhered to Dominion campaign.
What I mean by Perpetual Campaign is that instead of playing through a set number of territories and then the campaign coming a close, our campaign will be open-ended with no set victory conditions. This allows us to build up Rockridge's history and add more antagonists to our games and suits our gaming philosophy that 40k is journey and not a destination 😉

Of course, perpetual campaigns can bring up a number of issues like gangs becoming too powerful or characters dying and never coming back!
White Dwarf recently published some rules to help balance out gang ratings and stop powerful gangs dominating games with House Patronage Benefits. These range from additional Tactics Cards to hiring Bounty Hunters and Hive Scum to make up the difference between gangs.
However, as most 'Munda players will know, the death of a treasured fighter is quite a traumatic event (you really do become quite attached to your gang) and having to build and paint a replacement model can be too time consuming if you have other projects on the go (like terrain, another gang, Guild reps, Bounty Hunters, Mutants, Zombies....well, you get the idea). In a regular campaign it isn't too bad, you can simply bring them back when you start another campaign and all is well, but in a perpetual campaign with no end, they're simply gone forever.
To overcome this problem, I've come up with some rules for a perpetual campaign Medic. This will allow us to continue to use our treasured heroes that would otherwise be consigned to the Corpse Starch factories.

Perpetual Campaign Medic
If a fighter dies during the campaign (rolls a 1 on the Medical Escort or 66 on the Lasting Injuries Table), the player may take the deceased fighter to a Genestealer Cult Biophagus. This action costs no credits but the gang loses D3 Rep for every visit.

2-4.  I don't care what you say, they ain't right!
The fighter lives but goes into recovery for 3 battles. Once they recover they must take a Willpower Test each time the fighter is activated. If they pass, the fighter has overcome the virus for the rest of the battle. If they fail the fighter suffers from insanity and gains an insanity marker (Necromunda Rulebook page 60.).
This condition is permanent unless they visit a Doc for later treatment.
The Genestealer Cult gains D3 Rep as word spreads of their 'medical care'.
If the fighter visits another Doc for further injuries, roll a D6 once they have been treated. On a 5-6 the Doc notices their condition and administers an anti-viral to eradicate the virus. On a 1-4 the Doc doesn't notice their condition and the fighter remains infected.

5. Where am I?
The fighter lives but goes into recovery for 3 battles. Any advances that the fighter may have acquired are lost. Once recovered the fighter rolls on the Stabilised Medical Escort table.
The Genestealer Cult gains D3 Rep as word spreads of their 'medical care'.

6. Good as new....almost.
The fighter lives but goes into recovery for 3 battles. Once recovered the fighter rolls on the Stabilised Medical Escort table.
The Genestealer Cult gains D3 Rep as word spreads of their 'medical care'.

Hopefully, the Voodoo Dolls won't have to make use of this, but if they do it should make for some interesting stories 😁

Until next time....May the Hive Spirits watch over you 😉
Posted by Castigator at 07:34