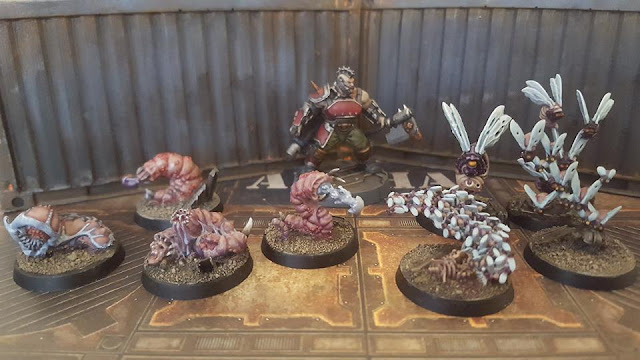 Greetings Sinners!
Quite a few people have messaged me asking about the rules I've come up with for my Underhive Gribblies. So I thought I'd share them with all the Mundaphiles out there.

Now that I've gone to the trouble of painting them up, we decided that it was a shame to only use them for one game so I devised something that would allow them to make the odd appearance in all of our games.
The solution was quite elegant and made use of Necromunda's game mechanic, the Priority Roll. For those not familiar with 'Munda, the Priority roll has both players roll a D6 to determine who goes first at the beginning of each turn. Any ties in the roll sees the Priority going to the player who went last in the previous turn.
What I came up with was the following:
If both players tie on their priority roll then a Critter Nest has been disturbed. The player who wins Priority draws a card from the 'Critters Deck.'

The Critters Deck
All of the Critters share similar traits in Necromunda. 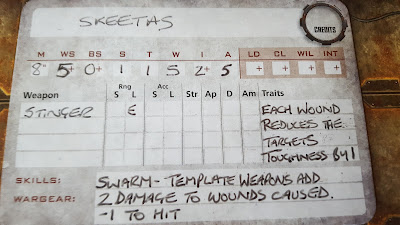 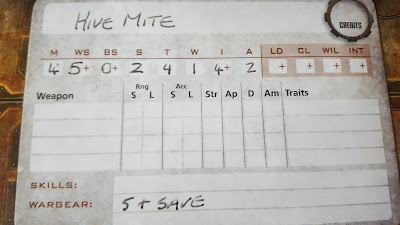 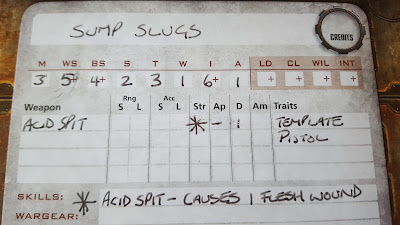 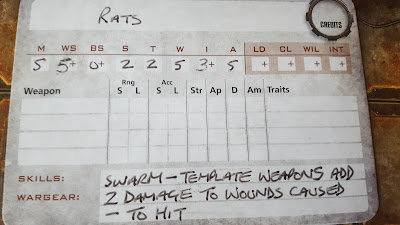 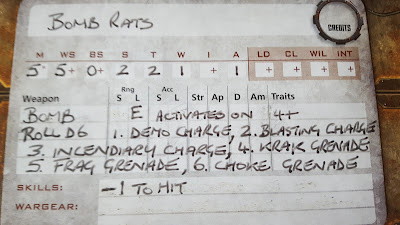 As you can see, none of them are particularly nasty on their own, but the can soon overwhelm somebody if a few bases swamp an unwary ganger.

Deployment
This was really straightforward for us because we play on 12" terrain tiles. Each terrain tile was numbered 1 to 8 outside of our deployment zones. When a Critter Nest is disturbed, roll a D8 to determine which tile the nest is in (If you're using a table surface or a terrain mat just place 6 markers equidistant outside your gangs' deployment zones and roll a D6 to determine the location of the nest). Place a Marker in the centre of the tile. Roll a scatter die and 3D6 for each individual base to determine their precise location from the Marker.

Basic Instinct
Each Critter base will move towards the nearest ganger in an attempt to defend its nest in the end phase (this gives gangs a chance to deal with the Critters or just get the hell out there should they be unlucky enough to find themselves overrun with the blighters!). Critters behave just like gangers in Necromunda, moving and charging in the same way.

Hopefully you'll have just as much fun as we're having with these rules or they might inspire you to design your own to fit with your model collection. That's the beauty of Necromunda.....it is such a diverse game system that it encourages players to come up with weird and wonderful rules to make the game do anything you want.

Of course we wanted them to be the main antagonists for our next game, so we started with 10 counters on the board that moved randomly at the start of each turn. If a ganger moved within 12" and could see the counter or the counter moved within 12" of the ganger and they could see them) we drew a card from the deck to determine which set of Critters the counter represented. We then scattered each individual base 2D6, placed a base and then repeated the process until all four bases had been deployed.

"Well? Asked Brigitte, "Any idea who sent the Cyborg?"
"The implants are quite recent and the work is crude, but still highly effective." Replied Sali.
"Yeah, I know just how effective the damned thing was, but who sent it?"
"I can't tell you that, but I can tell you where it came from.....Cruel Water"
Brigitte raised an eyebrow at the Doc, "And how do you know that?"
"You've no doubt noticed the sudden influx of migrants swarming all over the place? Well, they're all from Cruel Water, all claiming that the district has been cursed and all raving about someone or something they call the Puppet Master."
"So the dregs of Clear Water have been eating the wrong fungus, what of it?"
"Well one of these...ahem.. dregs came to see me while I was working on it and they recognised it. It was the same thing that slaughtered most of his settlement. It would seem that whatever has taken over Cruel Water may well have designs on the rest of Rockridge."

Brigitte settled up with the Doc and met up with Tia and Calypso at local drinking den.
"Get the gang together, we're taking a trip."
"Where to boss?"
"Cruel Water....it's time we went on a fishing trip...."

The flickering lights cast animated shadows across the settlement that led to Cruel Water, belying the fact that the place was deserted. The ominous silence was only broken by sporadic drips and the buzzing florescent lights overhead.

The Clean-Up Crew of House Goliath moved warily through the settlement..... 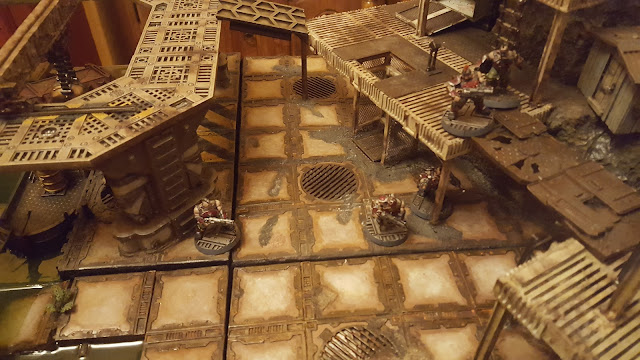 ....The silence grated on their nerves as the gang spread out slowly, yet none had the temerity to break it. 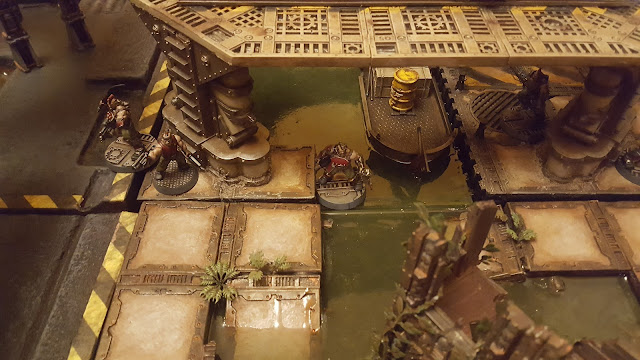 The oppressive atmosphere wasn't lost on the Voodoo Dolls either and when Longpoke Kari and Kimaris signalled that something was moving in the shadows, their sense of foreboding grew. 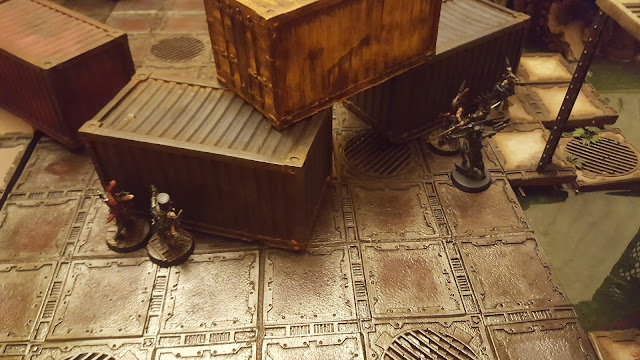 Cinders, one the Dolls' Juves, was the first to break the silence. Crawling from the sump and dropping down from nearby shipping crates Hive Mites fixed their beady eyes on her. She let out a shriek and blasted away with her Stub gun. Although she found her mark, the round ricocheted off of the Mite's glistening shell. 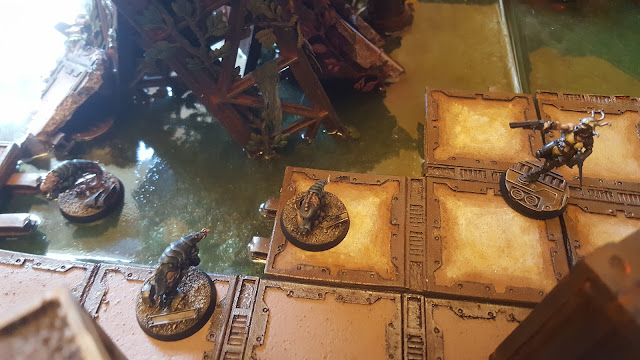 As the shot echoed across the settlement alerting the Goliaths that they were not alone, all hell broke loose! Grimey, the Clean-Up Crew's Juve, screamed a warning "They're coming outta the walls! They're coming outta the goddamn walls!!"
Sump Slugs and Rat swarms scurried and slithered towards him and there were so many targets that it seemed like the Juve couldn't miss.......but he did. 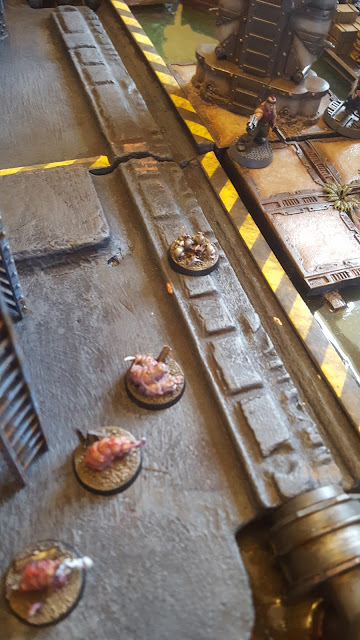 All thoughts that it was the noise that had antagonised the creatures were soon cast aside as a Bomb Rat scurried towards Sabine and Sumpsnake Sully. Sabine blasted the rodent with her shotgun triggering the bomb before it could hurt either of them. Bomb Rats aren't natural.....this was a trap! 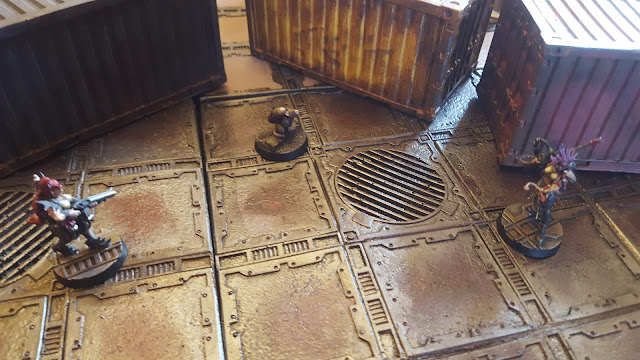 The Janitor, leader of the Clean-Up Crew quickly came to the same conclusion as another Bomb Rat scurried towards him....
The Janitor just had time to notice the Jerry can strapped to the vermin's back before it exploded. The Janitor and a ganger were pinned but otherwise unharmed. The same couldn't be said for the ganger on the gantry. Flames engulfed him and ganger fell, seriously injured, his screams echoing across the settlement as his flesh continued to burn.

Cinders had miraculously survived the attacks from 3 Hive Mites but as the Voodoo Dolls' other Juve, Jinx charged in to help her out..... 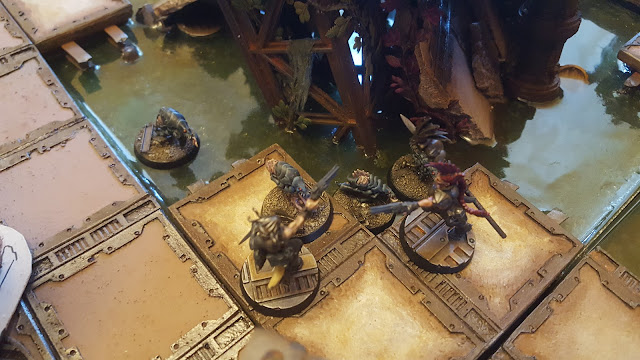 .....she fell. As the Hive Mite attempted to feed on her, Jinx leapt forward and skewered the beast with her Stiletto blade. 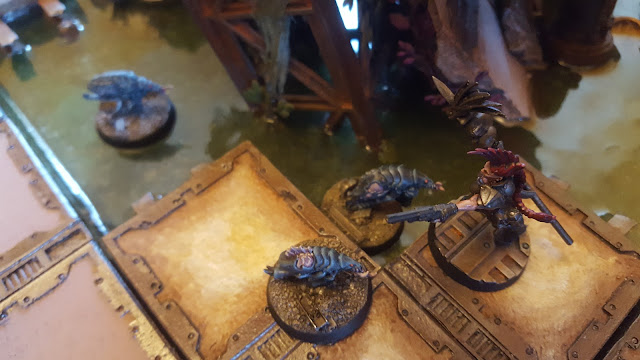 The Goliath's rushed to the aid of their overwhelmed Juve and blasted away at the rat swarm, killing some but not enough.... 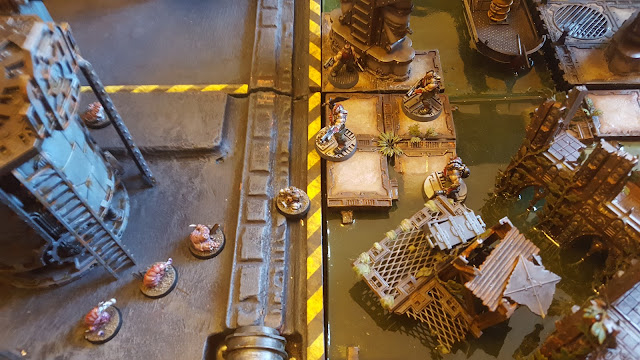 Realising the predicament that they were in, Grimey made the ultimate sacrifice and threw himself onto the Sump Slugs, taking the brunt of their acid attacks and saving his Brothers-in-arms. Spurred on by Grimey's selfless sacrifice the Goliath's champion, Sinister, charged the Rat Swarm..... 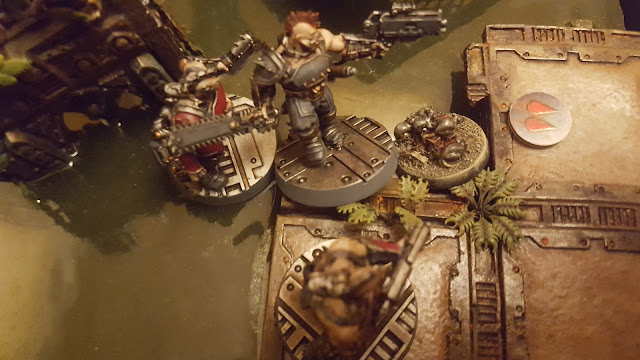 ......cutting them to pieces with his chainsword and freeing up the Goliaths to take more ground. 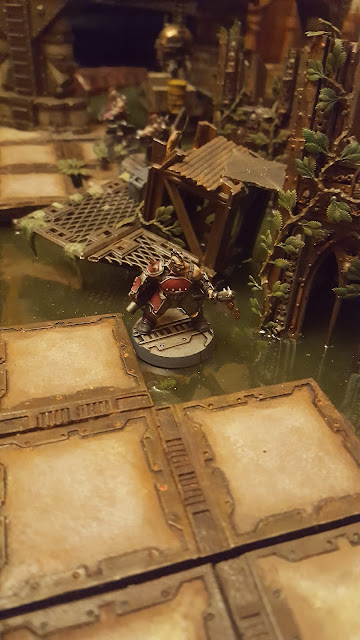 Maman Brigitte charged in to help out her beleaguered Juve, killing one with her Stiletto Sword...... 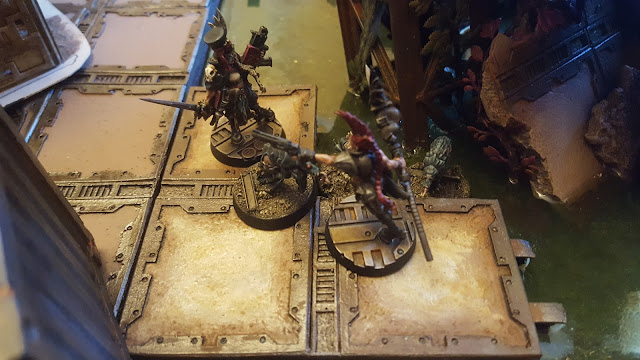 ....but unable to stop Jinx going out of action. 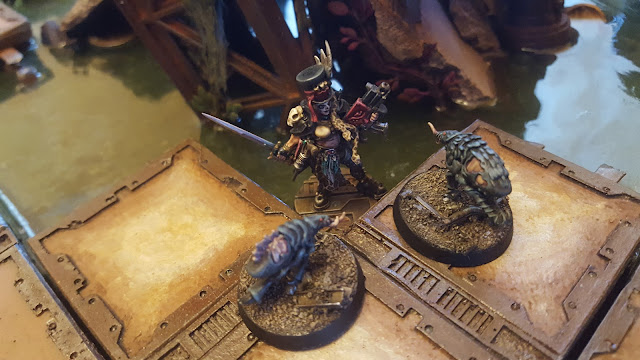 The Janitor and his accompanying ganger rushed to the aid of their burning gang mate and extinguished the flames. Whether it was the screams or the recently extinguished fire, four swarms of Skeetas rushed to attack them like moths to a flame! 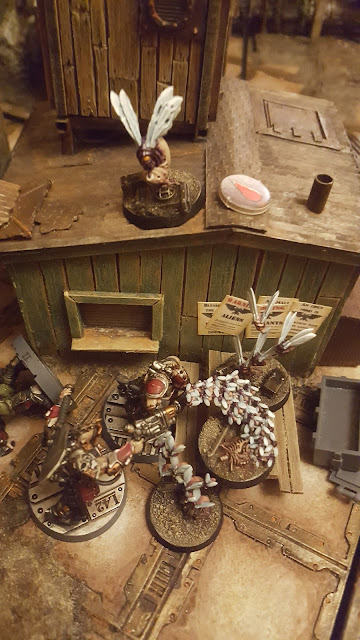 Despite Longpoke Kari and Kimaris gunning down a Rat Swarm and a Bomb Rat with their Heavy Stubber and Longlas, two Bomb Rats made it through the hail of fire and hurled themselves at Calypso and Sumpsnake Sully..... 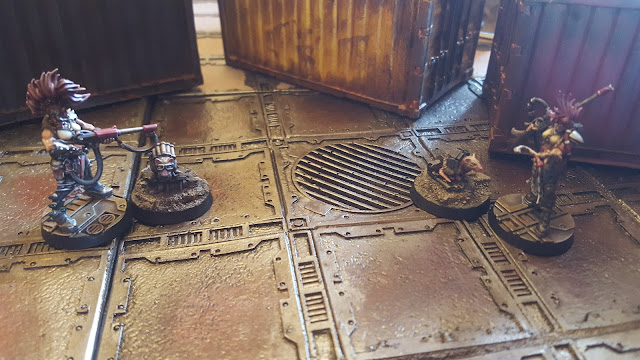 .....The Emperor smiled on Calypso as the bomb proved to be a dud but Sully was taken out by a Krak Grenade. 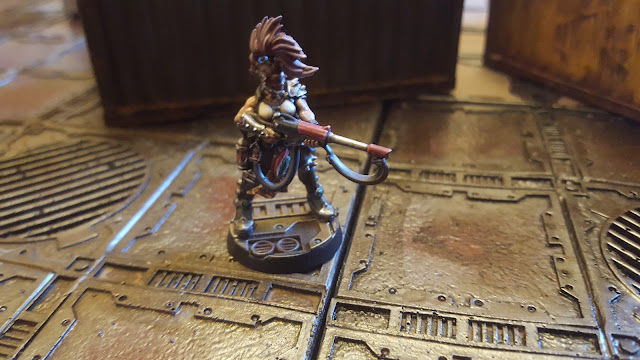 The toasted ganger recovered from his serious injury and joined his leader to fight off the Skeetas..... 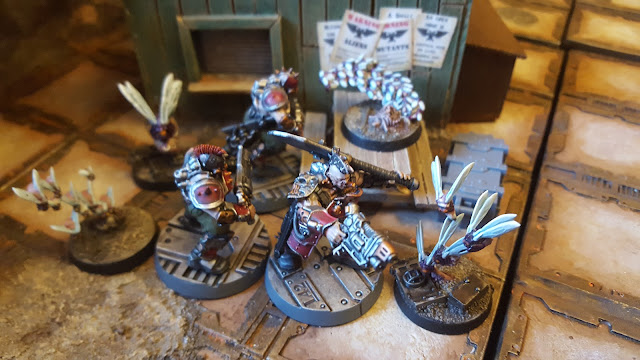 ....but his roasted flesh proved too succulent for the Skeetas to resist, and the Critters overwhelmed the already wounded ganger. 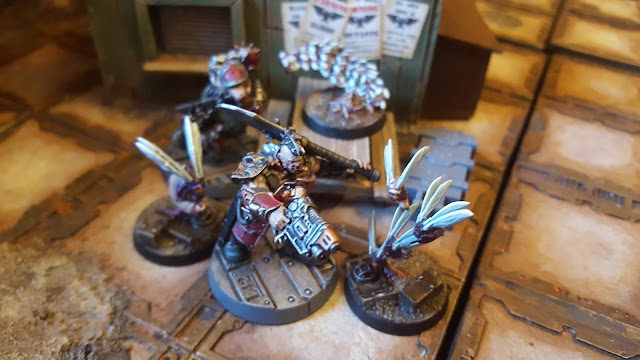 The Janitor, swatted the bugs with contemptous ease.... 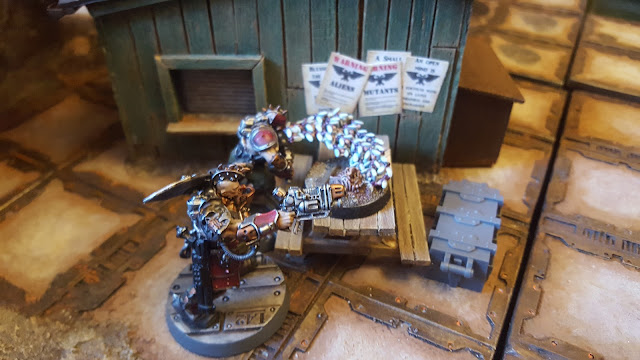 .......but both had been weakened by the Skeetas' stings. 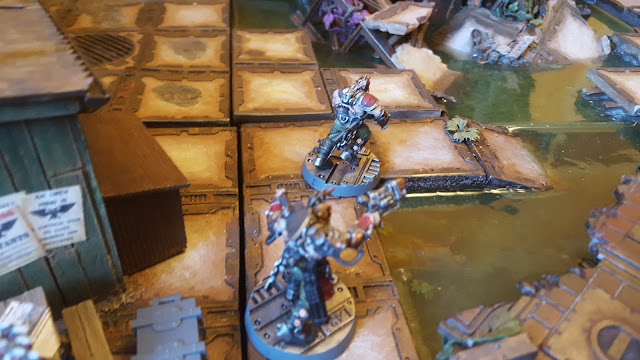 As the last of the Critters were disposed of, the two gangs turned their attention to their rivals. Longpoke Kari levelled her Longlas at the Goliath ganger that had helped the Janitor clear out the Skeetas and took him down. The Goliaths had lost four of their number but were still too pigheaded to break! 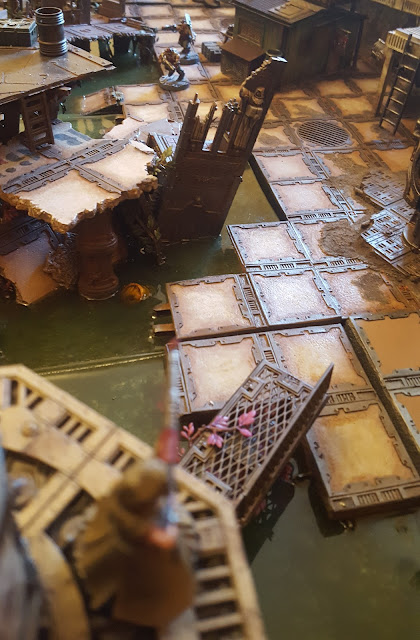 The Voodoo Dolls had no such qualms about calling it a day, the Goliaths gunned down the gangers Sabine, Tia and the Champion Kat, putting 6 of the girls out of action. Brigitte ordered them to withdraw and leave the deserted settlement to the Goliaths. 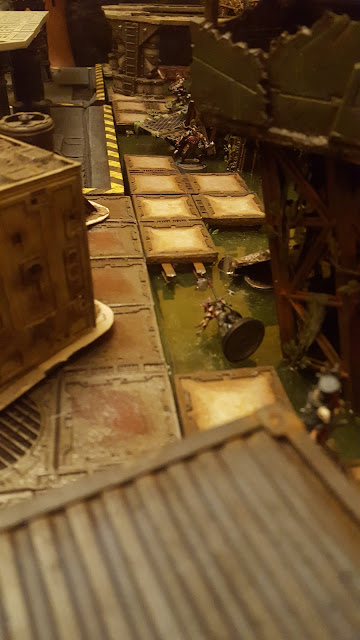 "How bad is it?" enquired Brigitte.
"Sully, Tia and Sabine should be okay after some rest. Your timely intervention with the Juves saved them from any harm and they're raring to go boss.....same with Kat." Replied Kimaris.
"Could have been worse, I suppose." mused Brigitte.
"So what now boss?
"We head into Cruel Water and find out what's going on. Sully, Sabine and Tia can catch us up when they've recovered.
"Hey boss!" shouted Jinx
Brigitte looked over towards the Juve.
"At least we'll eat well tonight!" She said cracking open a Hive Mite.

Until next time.....May Our Lady Grant you her number.