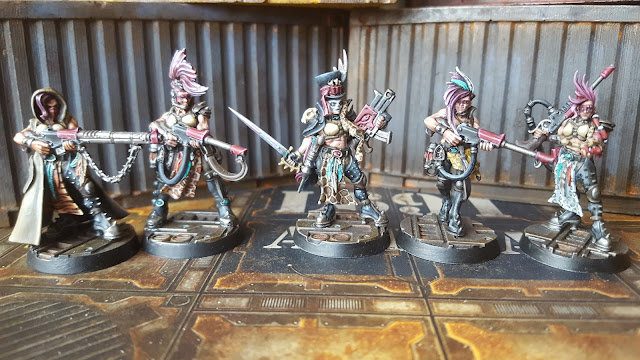 Greetings Sinners!
After many fun and enjoyable games of Necromunda, both Rob and I have settled on our lists for our games. For those of you that haven't given 'Munda a go (I highly recommend it!) I thought I'd take the opportunity to explain why it has been so difficult designing our lists.
It really boils down to the fact that Necromunda is such an incredibly diverse and fluid game system....


You're probably wondering what in the name of Slaanesh does he mean by fluid?
Well, just about everything within 'Munda is fluid, from credits (point values), scenarios, rules, all the way to the actual models.....everything is changing.
Those of us used to 40k probably think 'So what? 40k is always changing as well.'
The difference is the rate of these changes. In 40k it's limited by a new Codex or FAQ being released but in Necromunda the changes occur after every game. This is Necromunda's greatest strength but it can also feel a bit overwhelming when 3 or 4 of your gang suddenly need an arm swap before the next battle.
For someone like myself, who is a very erratic painter and is easily distracted by 'yet another idea for a model', it proved to be difficult to get my head around.....no sooner had I got the base coat on a model and I was ripping the arm off to give my ganger an Autopistol to go with her Lasgun.

Rob and I talked about this never ending change and we realised that the events that happen after the first 1 to 3 games, are usually the most problematic. In Campaign games (like we'd play anything else!) gangs usually start with a 1000 credits and they can only purchase things from their House list. After the first game gangs can visit the trading post to buy a vast array of weapons, equipment or wargear. So while my ganger would initially started out with a Lasgun, as soon as the first battle was over she was banging on the door of the local Trading Post to buy a Hot-Shot Laspack and an Autopistol. Another game later and she was buying a Stiletto Knife to complete her ensemble.
To overcome this issue we have decided that our gangs will start with 1250 Credits and they can buy from the Trading Post up to Rare 9 (some items have a rarity value, the higher the rarity the more difficult it is to acquire). We both decided that capping it at rare 9 would stop starting gangs from using heavy weapons and suspensors which can have an overly dramatic effect early on.


We've both found that after much play testing, this has allowed us to build our gangs with much more confidence, safe in the knowledge that they won't be changing their wargear too much. My poor leader Maman Brigitte has had more arms than an octupus throughout our games but I'm finally happy with her load-out, thanks to the GW lads fixing the initial issue with toxin......now if I can just roll above the Goliath's toughness I'm sure Rob will begin to fear her 😉


With that sorted out, I've taken a break from the scenery (almost) and returned to painting my Escher gang, the Voodoo Dolls, As you can see I've managed to paint up Maman Brigitte and four gangers and with a bit of luck I'll have them finished in the next week or so.......


.......However, I do reserve the right to change my mind about that, especially as Halloween is just around the corner and I have an idea about a scenario involving gribblies crawling out of the sump swamps 👻.

Of course while all this has been going on, Rob and I are getting plenty of games in and now that the table has some paint on it, I'm hopeful more reports will emerge from the zone of Rockridge.....

The Cruel Water Chronicles (Prologue) To Kill a Mockingbird....murderous, psychotic Cyborg.
The Clean-Up Crew of House Goliath patrolled the area between Pumphouse and Stranglevine Creek..... 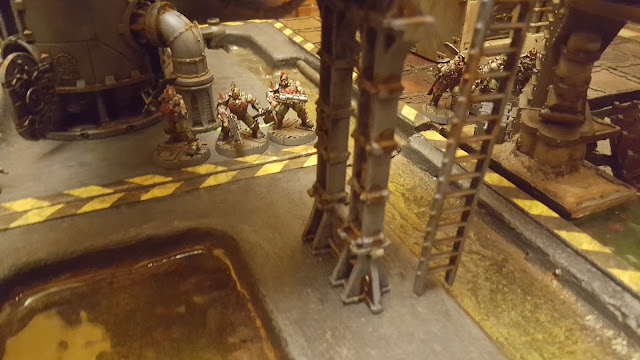 .....Unaware that the Voodoo Dolls were Watching their every move. 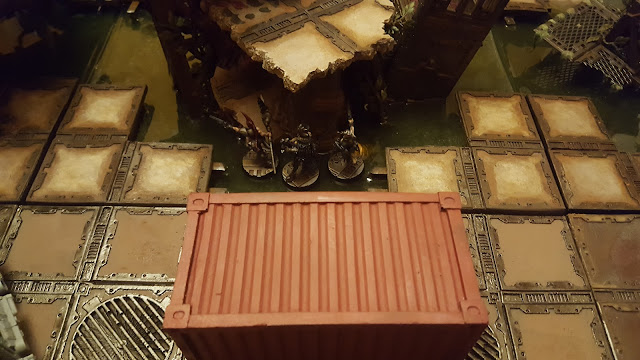 No matter how hard you try to hide in Rockridge....... 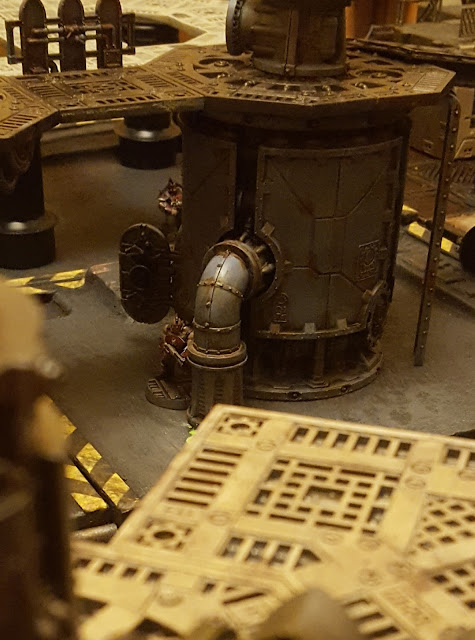 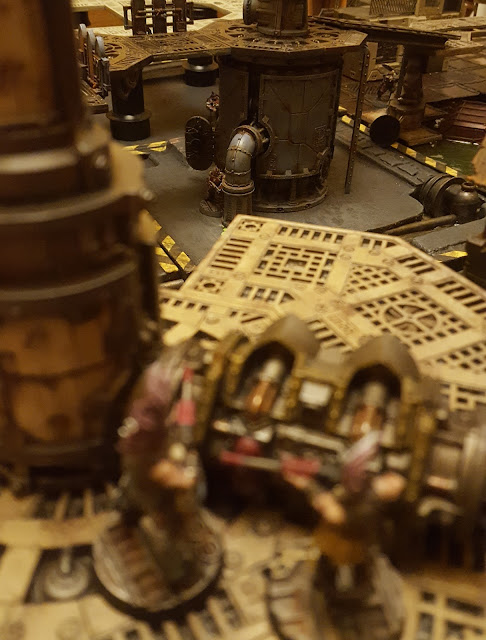 The Ganger Sabine blasted the Clean-Up Crew's leader, the Janitor, with her shotgun, leaving him bleeding out on the ground. The Clean-Up Crew's champion known simply as 'Sinister' came to his rescue, taking out Sabine and Sumpsnake Sully with a torrent of blows...... 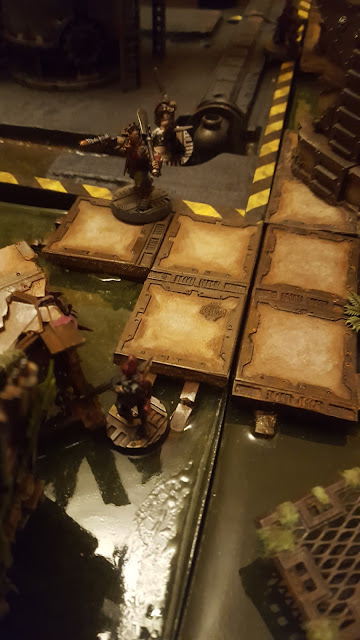 .....but he met his match against Maman Brigitte as she skewered him three times with her Stiletto blade. 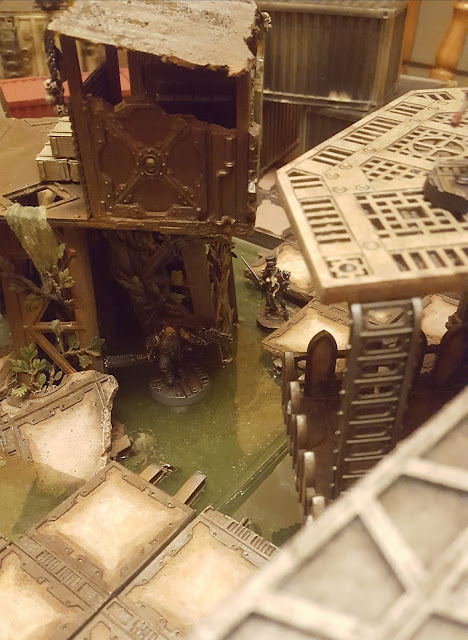 On the right flank, the Voodoo Dolls' young Juve Jinx, proved to be the victim of her own success. She casually blasted apart one Goliath ganger at point blank range with her Stub Gun and grinned maniacally as she sunk her Stiletto knife into another ganger. Her grin turned to shock as she sliced through the ganger's skin to reveal a Murder Cyborg hidden beneath the flesh.
All differences were put aside as the Cyborg engaged it's 'Decapitation' protocol. Desperate to protect their leaders, the Clean-Up Crew and Voodoo Dolls levelled everything they had at the thing for three rounds. The Dolls' champion Kimaris finally blew it apart with her Heavy Stubber....but not before the Cyborg had gunned down the Janitor with its Bolt Pistols! 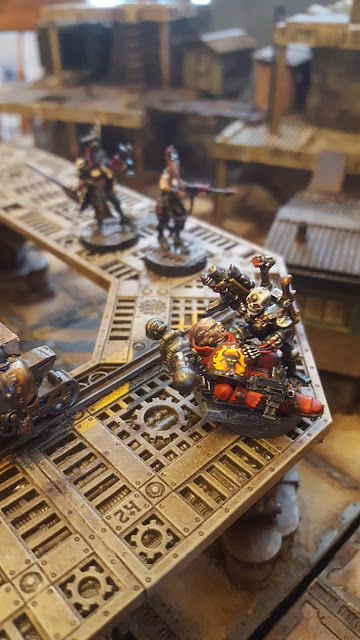 "You're a lucky man Mr Janitor, a lucky man indeed". wheezed the Doc.
"Drop the mister, it's just Janitor.....and I don't feel lucky!"
"There ain't many survive two Bolter rounds and live to tell the tale. Lucky for you it went through a couple of soft bits." continued the Doc as he finished stitching the Goliath leader up.
Kano stepped aside as the Doc flew through the door to land sprawling on the ground.
"I ain't got no soft bits!" Bellowed the Goliath leader.
"Well....What have you heard Kano?"
"Nothing on the streets boss. The Voodoo Dolls are asking around just as much as we are and nobody knows anything. But the locals are scared Boss."
"They're always scared!"
"Not of us Boss....or those Escher bitches either. Word is people have been going missing and screams have been heard in the sump smog. Everybody's giving Cruelwater a wide berth after eight families disappeared over the last cycle."
Janitor sat up and popped a stimm to ease his stiffness. "Get the gang together, it's time we found out what's going on. I ain't having the locals scared of anybody but us!"


Until next time......may Our Lady grant you her number 😉