The Path to Glory 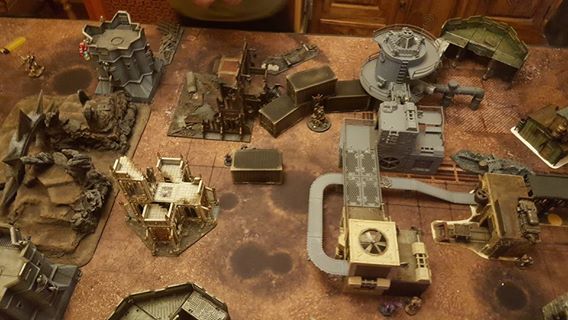 Fortunately, I have some gaming friends who are more into the narrative than they are into tournament play (me, I'm a bit of a slut and I swing both ways, like all true Champions of Slaanesh should!). Rob (remember him?) is one such mate.
We were both really stoked when Shadow Wars: Armageddon was sprung upon us....and equally both disappointed when it suddenly emerged that GW still don't understand their customer base and it would be a limited run.....Grrrr.
But hey, we don't need GW to tell us how to have a good time. Instead we have decided to immerse ourselves in the Path to Glory that was released 15 months ago.
For those of you who are new to the blog or have the memory of a goldfish (like me) we decided to alter the rules of Path to Glory to make it more of a skirmish game and balance out some of the glaring issues that the original game had: This is what I came up with.

We have decided to do a test run of the campaign. We're doing this for a few reasons:

We're still using 7th edition as the basis for the rules, the rules themselves are still solid enough.
So far we have introduced a push back rule (any rolls of a 6 to wound push the model back 1"). This is great for any model stood on a platform or walkway, they suddenly take a hit pushing them off of their position......well it might not actually be good for the model, but it's great for story telling ;-)


We've also introduced a rule that a model which falls takes a hit equal to the strength of the distance travelled in inches.....although that might actually be in the 7th edition rules now that I think about it.

One of the rules that I really dislike in 7th is that bikers and cavalry can climb up onto another level. I immediately introduced the rule that riders cannot climb buildings unless their was an access ramp. Both Rob's lord and my lord rolled up steeds as part of their rewards, so both lords can only move around on the floor at the moment. This has turned out to be a happy accident as we have found it stops both lords dominating the game too much.

Our final rule change (so far), is allowing models to leap across gaps. This can be a real risky manoeuvre, an Initiative test (if this is failed, they fall off of the edge) followed by a D6 roll to see how far they jump.

All of the rules that we have introduced seem very intuitive (to me at least) and are easy to remember.


Because the terrain is so dense compared to regular 40k, we decided that there would be no penalty for moving up and down levels, although now we have a couple of games under our belts, I might trial a 1" penalty. 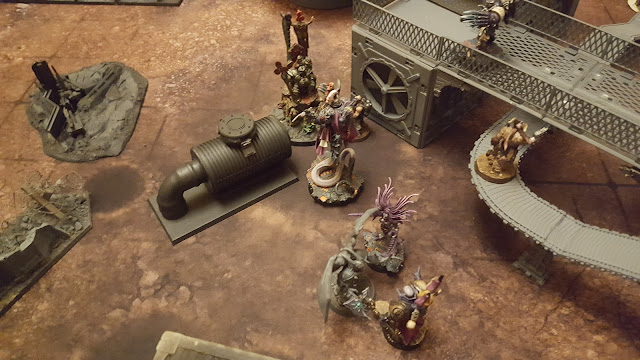 The two games we have played so far have been a right blast, we've done nothing but laugh and giggle at each others misfortune or daring deeds!
Our first game was a straight up kill point game and we quickly discovered that every model really does matter in the greater scheme of things. Kranwulf the Magnificent and his Castigator Warband took the honours, gaining 2 Favour Points to Kithal Nalax's 1FP. It wasn't all bad for the Death Guard though, The din of battle drew the attention of 2 Chosen to add to his Warband.


In our second game we played for 5 objectives. Each Objective was placed 12" from a corner with one placed centrally. Once the Warbands were deployed we then scattered the objective 2d6 to see where they would end up.
This game was incredibly good fun. The Castigators looked to be dominating early on, The Noise Marine providing cover fire on the Winchester's roof managed to take out a Chosen but his field of fire was so limited he spent more time popping down to the bar rather than shooting! 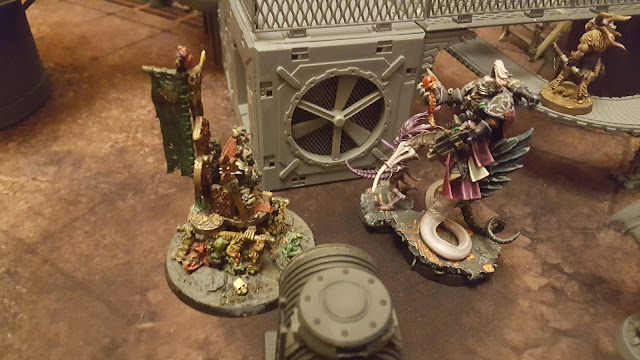 Kithel Nalax charged into Kranwulf, but the Slaanesh Lord wounded him 3 times before he could swing! Even though Rob's Lord had 5 wounds thanks to his Palanquin, Kranwulf danced around his clumsy attacks and took him out!

With their Lord out of action, the Death Guard's Dark Apostle led the way, charged by the Castigators' Spawn, he hacked it apart to secure the objective. The Slaanesh Herald charged in to try and claim the crate from the Apostle, but lost a wound from the mighty Nurgle warrior. Curiosity got the better of the Herald and she opened the box.....Boom! The booby trap wounded the Apostle and sent the Slaanesh Herald shrieking back into the Warp!

Inspired by this turn of events, a lowly Death Guard Cultist (who is now known as Lockstock, because of his two smoking barrels!), levelled his shotgun at the charging Slaanesh Chosen Champion and blew him off of the walkway to land in the dirt.....much to the laughter of all who saw it! Determined to exact bloody retribution for getting his armour mucky, the Chosen picked himself and charged in. Ducking and weaving, Lockstock dodged his blows and smacked the Chosen round his head with his trusty shotgun. The wound went through his armour (that'll teach him to wear his helmet in future) and we thought he had killed him......but the Gods had other ideas as he passed his 6+ FNP....phew!
Not content, with showing himself up against Lockstock, he then attempted to leap from one building to another, his timing was perfect, he soared into the air, everybody stopped to look in awe at the Marine's elegance......and then that awe turned to laughter as the Chosen Marine face-planted into the dirt....again!
The Death Guard Cultists must have had their Weetabix as they carried the day. Another of the Cultists leapt over a railing to land near the Castigators' Sorcerer and steal the objective. It must have surprised the Warp meddler and made him lose concentration. He fell to the floor clutching his head as his control of the warp overwhelmed him!
The Death Guard took the honours, claiming three objectives to the Castigators two. We decided each crate (objective) was worth D6 points to add to our armoury. Rob rolled 14 and I rolled 2.....not a great day for the Slaanesh boys!

Kithel Nalax now has 4 Favour Points and 2 Cultists have joined his ranks, Rob also rolled another wound for his Lord, giving him 6 wounds now!

Kranwulf the Magnificent is trailing on 3 Faith Points and rolled up Bedazzling Assault (any failed leadership test in base contact with him reduces their weapon skill to 1). The Castigators also attracted another two cultists to their cause, so the campaign is pretty close so far.

So expect to see more terrain building, Warband converting and inane ramblings on this little project in the future ;-)

Email ThisBlogThis!Share to TwitterShare to FacebookShare to Pinterest
Labels: Path to Glory