1st Confrontation Alliances - The First and the Last. 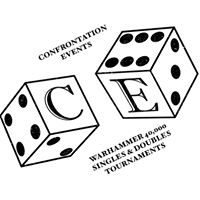 The Great Game
The Realm of Chaos, is not merely the home of the Dark Gods, it is their battlefield, the arena of the great game of supremacy. The Chaos Gods are constantly at war with one another, vying for power amid the immaterial planes. Despite their myriad differences, the great Gods of Chaos have the same goal; total domination.
From time to time there arises a being, place, objective or event in the material universe that attracts the attentions of the Gods of Chaos. So important is this new element, so desired or so dangerous, that all rivalries are put aside in order for Chaos to take advantage of this opportunity.
But the dark Gods cannot stay their meddling hands, as their Champions march forth, the dark Gods pass down rituals to bind their cohorts.
And sometimes the ritual is of great import: "No Weapon, Iron or Steel shall you use, nor any Wooden Shaft, but only the natural Claws and long Fangs that we have given thee." And sometimes the ritual is petty and beneath contempt: "No Blues shall be worn, nor shall the Mauves and Purples be seen upon this field." In the immeasurable minds of the Dark Gods there is purpose that cannot be guessed and schemes unfathomable to the limited mind of mortals.
And the ritual shall be agreed, and it shall be binding, even unto the least creature, even unto the greatest.
Martial pride, knownst unto the first God, knownst unto the last. "You shall not use the Dark Magicks or Words of Power. And you shall bring unto me the greatest number of Souls I am due." So speaketh Khorne and Slaanesh. For when the Dark Gods have spoken, none can gainsay their word. And the battle shall begin......

Greetings Sinners!
In a weeks time, Confrontation Games are holding a 1000pt doubles event. The Cold Steel Mercs will have four teams attending.
The word is that Neil and Mike will be using (mainly Tzeentch) Daemons. My network of undercover operatives have confirmed that Magnus has been sighted but communications have gone dark since his sighting, so I expect to see ridiculous amounts of Warp meddling from them and at least a couple of summoned Bloodthirsters. 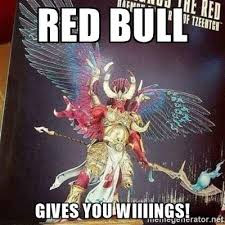 Pete and Seb will also be there, but something dreadful must have befallen my operatives as no word has reached me about their armies. Prognosticators have consulted the Emperor's Tarot in attempt to uncover the truth but an unnatural smog blocks all attempts. The only clue is that the smog has a green colour. 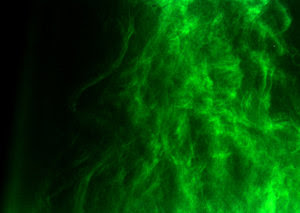 My operatives have had much more success with Matt and my fallen brother, Steve.
It was no surprise to discover that Matt was taking Tau. 3 Riptides, a Ghostkeel and 2 units of Stealth Suits is what I would expect from someone who has never been touched by the dark gods. No, the real surprise was when my first operative returned to tell me of my brothers army. My disbelief was understandable. Despite several sessions with my Excruciators, the operative insisted that he had no hidden agenda and he spoke only the truth. It wasn't until my second operative returned and confirmed this most horrific turn of events that I understood how far my brother has fallen. Steve would be using Ynnari!
It is a dark day my friends, a dark day indeed.....my brother is lost to me! 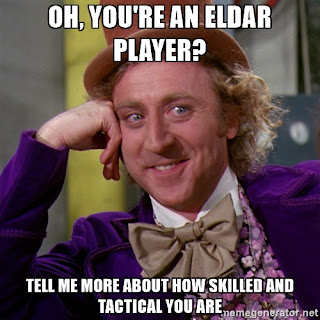 Both Iain and myself have managed to get time off to attend and after a bit of head scratching we have come up with our 1000pt armies to do battle in the deepest, darkest realms of the South.
An unholy alliance of Khorne and Slaanesh will do battle in the name of the dark gods, both vying for the greatest number of souls for their patron god.

The Dark Prince has once again summoned her servant Sheee'la'sar of the Harbingers of Joyous Degradation to the mortal plane, tasking her to reap more souls than the Blood God's minions. To aid her in her task, the Huntress of Slaanesh has acquired the services of the Hellstriders Forgehost; three mighty Slaanesh Soul Grinders!

The Harbingers of Joyous Degradation


Eager to belittle the Dark Prince, Khorne has called forth his Red Tide led by the Daemon Prince Sladic. The Blood God has commanded his servants to fight alongside Slaanesh's cohort, but both God's martial pride has been roused and a tally will no doubt be taken!

Despite being more interested in building and painting things for Shadow Wars and our Path to Glory campaign (at least until 8th edition is released), this event has forced my hand as I only have 1 Soul Grinder! Fortunately, my fallen brother, Steve has one that I can borrow, but that still means I have to build and paint a Soul Grinder in less than a week!
This will be something of a challenge for me as I'm sure you've all realised by now that I'm not the quickest painter in the world. So for the next week I'll be concentrating on doing just that.....So expect any Path to Glory Warband news to come from Rob.
I'm sure I can rise to the challenge and get something ready for the tabletop. It will be a quick paint job anyway because I plan on ripping it apart after the event and converting it once I have more time....I have a great idea for a conversion; but that will be for another time ;-)
So expect to see my last ever tournament report* in a couple of weeks time and we'll discover if it was the first god or the last god that reaped the most number of souls.
Until next time......may Our Lady grant you her number.

Warp storms rage throughout the system, making escape impossible. Psykers rake their faces with bloody nails, tearing at skin and gouging out eyes in a bid to drive out the obscene images that haunt their waking dreams. Desire gives way to fury, rage to torment: Madness and terror go hand in hand as the unholy alliance of the First and the Last Gods stalk the land.

* I had you there didn't I? I mean it will be my last ever Tournament report using 7th Edition rules ;-)
Posted by Castigator at 06:45