The Long Wait is over, now let's get back to the Long War! 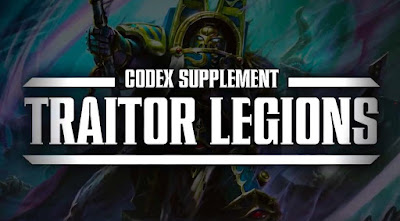 Greetings Sinners!
It's been a long wait for the Traitor Legions; 14 years since the last Codex with Legion rules were published. Finally our time has come again......and I, for one, welcome our new Chaos overlords! 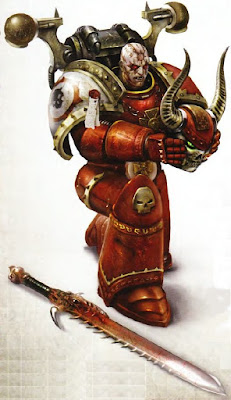 First of all, let me just make clear this article isn't a review of the supplement, it's more of a collection of thoughts and ideas that I'm chucking around. A couple of people have said to me that they're a little unsure how all of this works in the grand scheme of 40k, so hopefully for those peeps it will make it a bit clearer.....I reserve the right to change anything that I've said should I get it wrong! ;-)

Obviously, I will be concentrating on one Legion in particular, but don't let that put you off too much, some of these ideas will carry across to other Legions as well and will, hopefully, get your creative juices flowing.


There are a few ways to use this supplement, but whichever way you do, you must have Codex: Chaos Space Marines to make it work, this is a supplement and not a stand alone Codex such as Khorne Daemonkin. 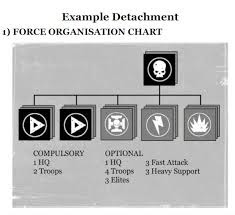 This is the good old regular way to play 40k (which I still prefer for tournament play). If one follows the restrictions in the Legion supplement for the Emperors Children then certain Special Rules apply to all units in the CAD; these are:

All units in an Emperor's Children Detachment or Formation gain the following Special Rules:

Fuelled by Sensation
Units that have the VOTLW special rule have the Fearless and Feel No Pain (6+) Special Rules. Units with the Icon of Excess get 4+ FNP.
If a model with VOTLW is slain in combat before it has attacked it can make a single attack before being removed.
Masters of Kakophoni
Units of Noise Marines are Troop Choices.

They also gain access to Chaos Artefacts and Warlord Traits.

This is the easiest way to play an Emperor's Children Warband and the one that most people are familiar with.

Rapture Battalion
This where things can get a little confusing at times. A Rapture Battalion is a special type of Legion Detachment that can be included in any Battle Forged army. It has a Force Organisation Chart whose slots are made up of specific Formations and army list entries; the army list entry in this case is a unit of Chaos Spawn. Chaos Spawn are not a Formation, they are a unit entry.
Formations
This is usually where the confusion can arise, especially when tournaments and events impose restrictions on the number of sources that an army can be made up of.
A Formation is a collection of specific units that combine to make a specific Formation. Formations can be added to any Detachment, CAD or Rapture Battalion (Legion Detachment) and they are still Battle Forged.
The Traitor Legions supplement has all the Formations that are required by any of the Legions. I think the Traitors Hate Supplement has a one maybe two different Formations that aren't in the Legions supplement. These could also be bolted on to a CAD or Legion Detachment and the army would still be Battle Forged.
Hopefully, that makes things a little clearer for anybody who has never used Formations or Alternative Detachments before. Incidentally, these Alternative Detachments are often referred to as a 'Decurion' Detachment.

Rapture Detachment
The Rapture Detachment is comprised of a Core Formation and at least one Auxiliary. A Rapture Battalion can include up to:
0-4 Lord of the Legion.
1+ Core.
1+ Auxiliary.
So the only real limit is the point size.

The benefits from the Rapture Battalion are reroll Warlord Trait and a roll on the Combat Drugs table that is applied to all non vehicle units from the Detachment.

The Auxiliaries and Command Formation are straight from the Traitors Hate Supplement, so they should need no explanation, as is the Chaos Warband.
The Kakophoni however is a new Formation for the Emperor's Children (the Death Guard also get a Formation called the Plague Colony).

Special Rules: Split Fire and Shred. If the Formation starts with 6 units they gain +1 strength to all sonic weapons.

I may have mentioned before that I love Noise Marines and I really really want to use the Kakophoni. Unfortunately, as much as I love them, 6 units of Noise Marines is a lot of points (804pts for 6 x 5 Noise Marines with a Blastmaster and 3 Sonic Blasters, and then there's the cost of the Lord on top). They have Objective Secured because they would belong to the Emperor's Children Detachment and all Noise Marines are Troop Choices, but unless I'm playing above 1500pts, I can't see me using them because of the Lord tax.
The Lord probably doesn't seem like a tax, but once I start to add Auxiliary Choices it becomes clear that the Rapture Battalion is really designed for games above 1500pts (sneaky GW making me want to play larger games!).
So if I want to use a Rapture Battalion I'm leaning towards the Chaos Warband.

Chaos Warband
The Chaos Warband is the other Core Formation that I would need to use if I wanted to take advantage of the reroll on the Warlord Traits and Combat Drugs. Of course, once again, if I go down this route it limits my options considerably at 1500pts.
The minimum requires me to take :

The Special rules for this allow two rolls on the boon table for a Character who wins a duel and to choose one or both rolls. Added to the roll they already receive for Combat Drugs and it begins to mount up. Better yet every unit has Objective Secured, couple this with all models with VOTLW being fearless and this Warband becomes very worthwhile! Objective secured units that must be wiped out to a man sound very good to me.....Deathstars can't get everywhere can they?

So while thinking about this, it then hit me that I could build the Slaanesh Biker list that I've always wanted. Bikers now being Fearless mean that I no longer have to worry about them needing a Lord to stop them breaking.

That gives me toughness 5, 3+ armour, 4+ Jink & 4+ FNP with Object Secured and the Champion gets an attack even if he dies.
Add another two units (the Warband allows up to 3 units) and that gives me 18 Bikers bombing around the Battlefield, being a right royal pain to all and sundry....even Tau will struggle to remove that lot in a turn ;-)
There is one fly in the ointment however, if I take the Rapture Battalion I can't use Forge World.....apart from the Dreadclaw for one of the Troop Choices, but the Battalion is so points intensive that I probably wouldn't be able to afford to anyway.

So this is where my brain is at just lately. Knocking around various ideas for the latest incarnation of the Castigators. I still haven't finalised a list yet, but one thing is for certain, I'm going to have to do a lot more painting and I'm really enjoying the book!

Until next time.....may Our Lady Grant you her number!