Path To Glory: Call Of Chaos 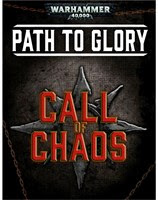 Greetings sinners!
I'm sure every self-respecting GW fanboi knows that Games Workshop are doing their usual Advent Calendar once again....and I'm sure every self-respecting Chaos Lord worth a spit, knows that all of them are Chaos related this year. So despite the lack of sunlight to paint with or to cheer me up, I'm really stoked with GW's offerings this month, so much so that I've subscribed to all of the 40k Advent Calendar! 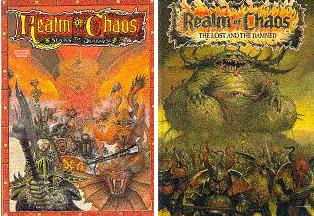 A long time ago in a galaxy far, far away.....Oh wait, not that.
Longer than I care to remember, Games Workshop released the Realm of Chaos books (Slaves to Darkness & the Lost and the Damned), which were full of great ideas and stimulated the imagination to such an extent, that everybody who read them immediately sold their soul to Chaos. These books offered everything you could ever ask for as a Chaos follower; Legions, Cult Marines, Heroes, Beastmen, more random tables than you could shake a stick at, but there was one slight problem....they were pretty much unplayable unless you had an entire weekend to play a game!
Yes, as inspirational and imaginative as these books were, they were very impractical to play, but bugger me if they didn't set the imagination alight!

So fast forward to the present day, and 40k resembles something that looks more like 'Epic 40k' than 40k of yesteryear. Titans stride across the battlefield, a full company of Marines can stand before you and an entire airforce can render your plans of conquest obsolete. Some gamers (me included) look back to previous editions and yearn for the days when one model could make all the difference.....enter.....Path to Glory: Call of Chaos!


Now for most 40kers this is no big deal, but for all those that miss previous editions, Necromunda or the Warband rules from Realm of Chaos, then this will really tickle your fancy!
The idea is pretty straight forward:

You start out with one Chaos Lord that is WYSIWYG in terms of wargear. Add up to D3 Chaos Rewards and you can only take 1 Chaos Artefact, although if you do, you start out with 1 less unit of followers.
You start out with D3+3(+2 if you took an artefact) followers that you can either roll for or choose from the tables, which are separated into hero, retinue and vehicle.
Hero table is all HQ choices plus spawn but minus daemon prince.
Vehicle is all of your HS and FA vehicles.
Retinue is everything else. Squad size is predetermined. 10 CSM, 3 Bikers, 5 Termies, Blessed number god squads, etc.

After each game, you can add 1 unit by either choosing it or rolling randomly or you can add a "Lesser glories" reward to a chosen unit, such as gaining Shroud for one turn, or Shooting again after your shooting phase once per game.

It's designed to keep escalating by either adding units or improving them until someone gets a daemon prince and then wins one game with it.

Now all this seems pretty straight forward. No points and you'll probably max out on the wargear that each unit is allowed, but Chaos against Chaos really does lend itself to incredibly close games where every model matters, and more importantly, it grips the imagination and tells a story along the way.....which deep down, is what every player wants to play (and if you don't, then what in the name of Slaanesh are you reading this for!).
For me, this is all I can ask for. I get to to play Realm of Chaos against my mate Rob (who I just know will be all over this) and actually fulfil one of the dreams I always had about the Realm of Chaos.
Nice work GW.....this may well stop me playing regular 40k.....for which my bank balance thanks you ;-)


Until next next time.....may Our Lady Grant you her number!
Posted by Castigator (Gary) at 14:17

Email ThisBlogThis!Share to TwitterShare to FacebookShare to Pinterest
Labels: Path to Glory