Storms of Judgement Campaign - The Sacking of Mammon 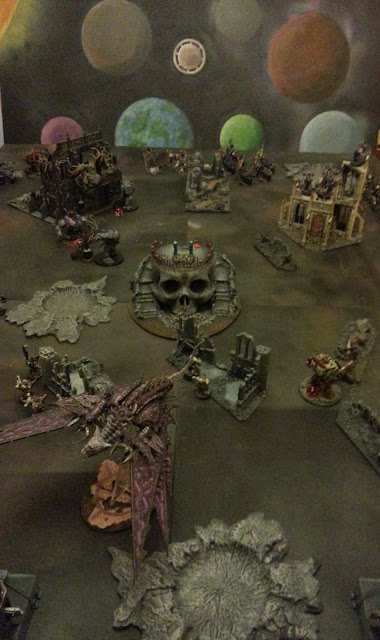 Port Avarice was empty when Festus and his Death Guard dropped onto the central landing pad, his forces had fanned out to clear the facility encountering no opposition.
Usually a planet's main port would be a bustling hive of activity, but Port Avarice was deserted. The occupants had obviously left in haste, evident by the dropped trinkets and garments littering the eerily quiet streets.

Still smarting from the loss of the space station, Voidspan, Festus had immediately determined a course of action. The Space Port on Mammon would would make an ideal base of operations for the Death Guard. With this undamaged Space Port he could coordinate sweeps and searches of the entire system, it wouldn't take long to locate Nestor and his decadent Castigators from here.
With this in mind he set his menials to task fortifying the base and re-activating the deep space scanners. Moments after restoring power, Proximity alarms began flashing, accompanied by the wail of a droning klaxon.
"Report." Ordered Festus.
"Scanners report no unidentified ships in the vicinity" replied the Warpsmith Darkmite.
"Well something must be setting off these damned alarms! Find out...." Raged Festus.
"I think I can answer that" interrupted Tosis Mire.
Festus turned to look at his second-in-command, but the Nurgle champion was gazing through the window into the gloom.
"And how would you know what's approaching?" Growled Festus.
"Because they are already here, sire." Sneered Tosis pointing into the gloom.

Greetings sinners!
I thought I had posted this battle report up a while ago, but while painting up my Mammon Cultists, I realised I hadn't. I'm not sure how old this report is but my Mayhem Pack is still unfinished so it must be a while ago. Anyhoo, here it is, hope you enjoy it. 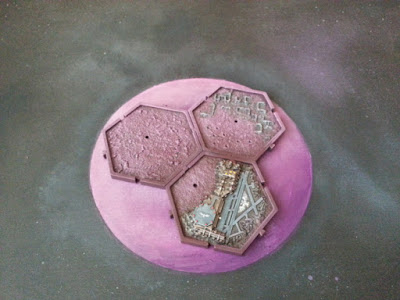 Mission
We rolled the Relic and Purge the Alien using the Hammer and Anvil Deployment.

Deployment
I won the roll to go first and deployed my Noise Marines in both buildings as high up as possible, the Bikers hid behind a central ruin with the  Predator on my right and the Vindicator on the left. 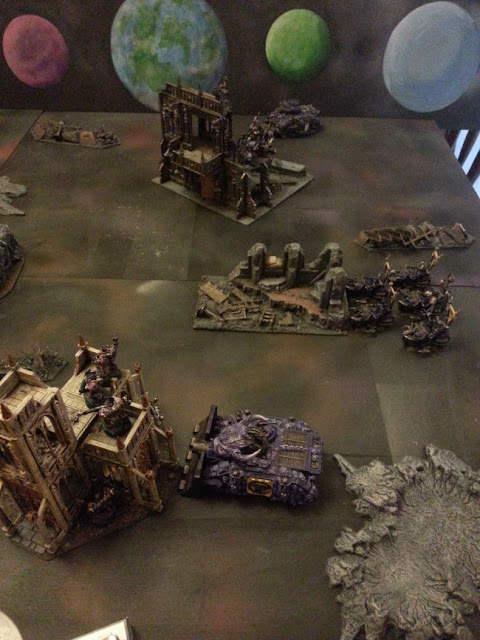 Rob Deployed on his Spawn and Festus as far forward as possible, with both Plague Marine squads supporting them. His Obliterators lined up against the Castigators’ Predator on his left flank. 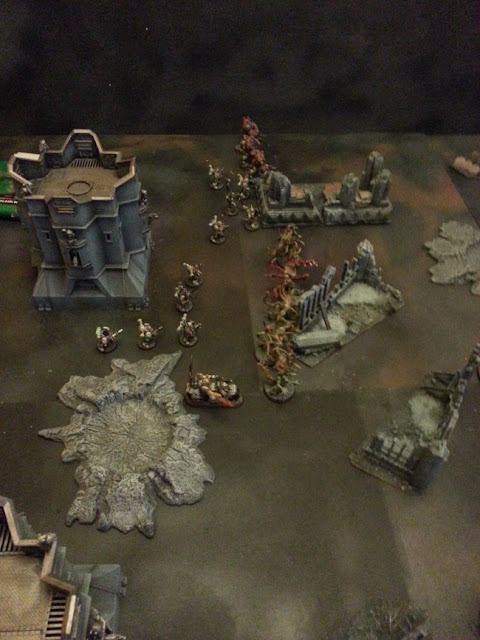 Turn 1
The Bikers moved over to the left careful to keep out of line of sight of the Nurgle Obliterators, while the Vindicator moved up the left flank and popped smoke….. 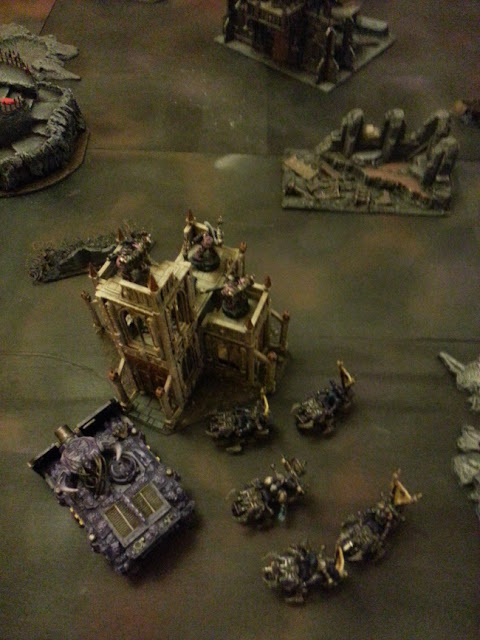 …..The Noise Marines opened fire on the Nurgle Spawn but the shot scattered wildly, killing a Plague Marine. The Predator took aim at the Obliterators, killing one. 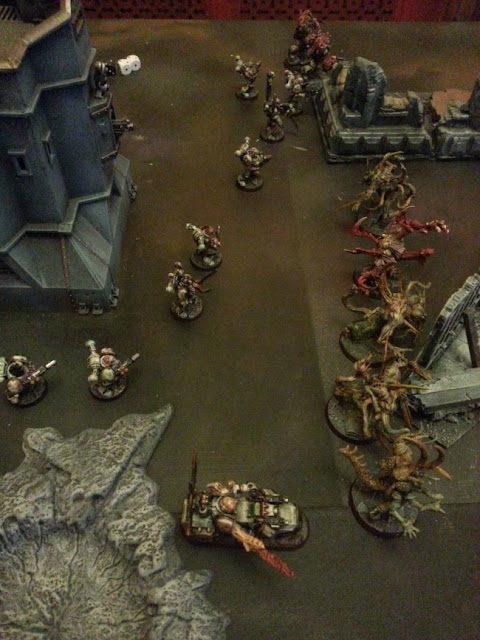 Turn 2
The Castigators Mayhem Pack arrived along with their Heldrake…… 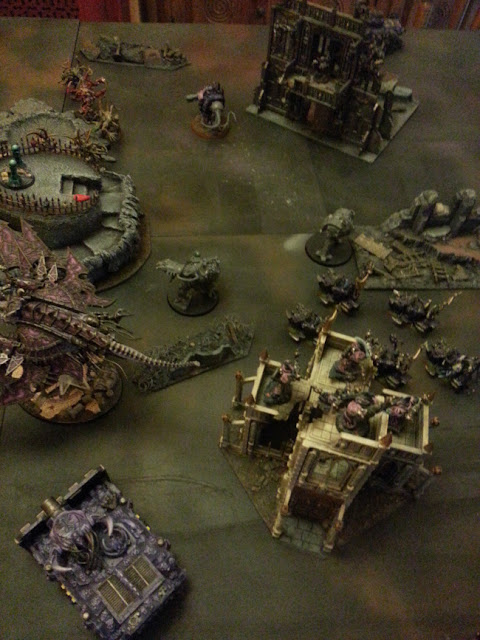 All three Dreads, the Bikers, a Noise Marine squad and the Heldrake opened fire on the Nurgle Spawn….. 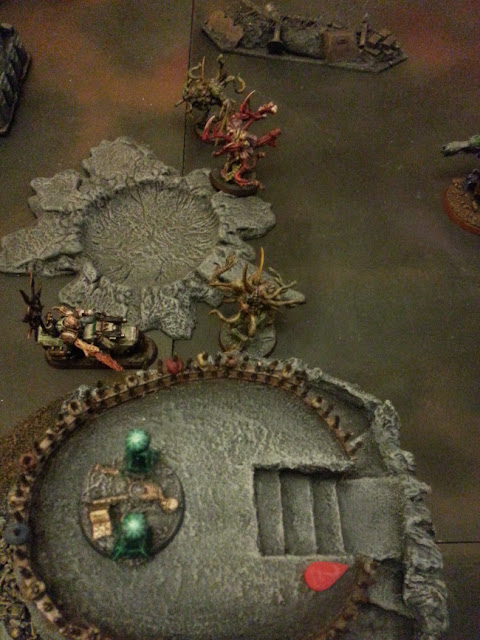 …..Killing two. The Noise Marines on the left opened fire on the Plague Marines in the centre, killing two. 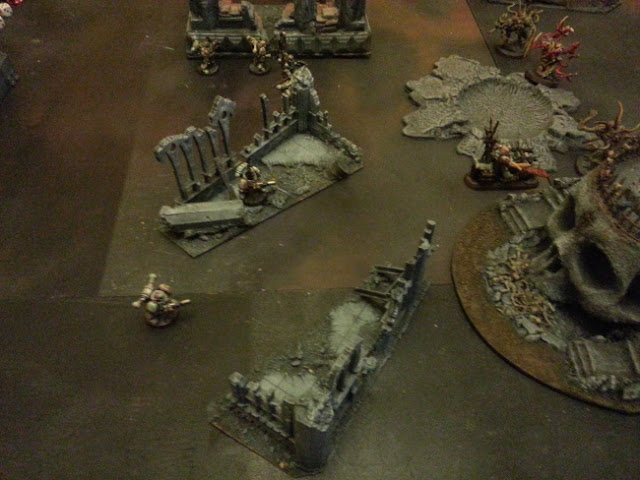 The Death Guard Mayhem Pack arrived, one came in behind the Slaanesh Bikers…. 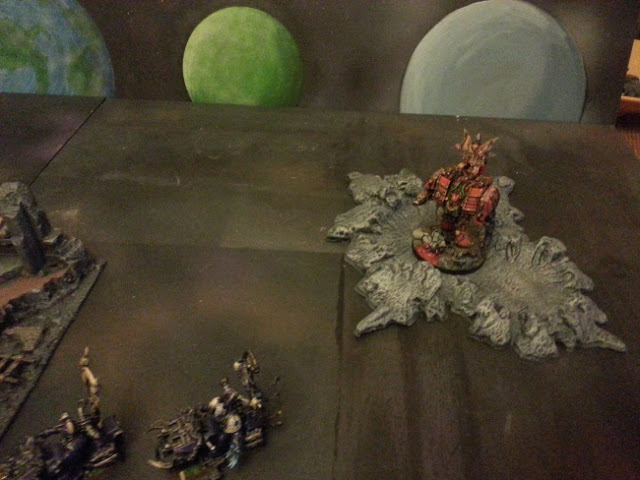 …..Another near the Castigators’ Predator….. 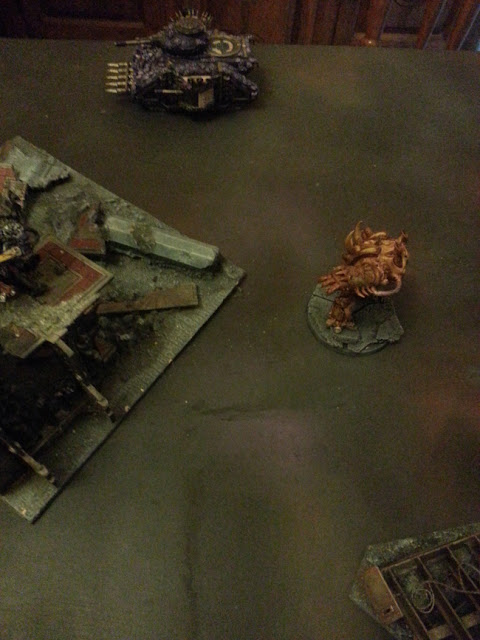 …..and the final one dropped in to support the depleted Plague Marines….. 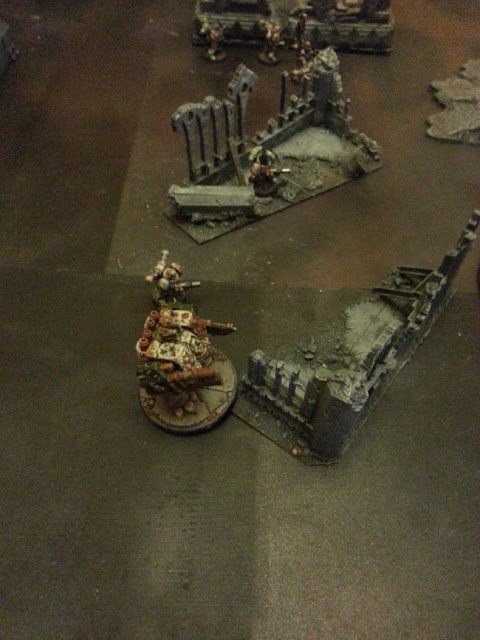 Festus sent his Spawn towards the Noise Marines on the upper storey of the building while he moved towards the Slaanesh Helbrute….. 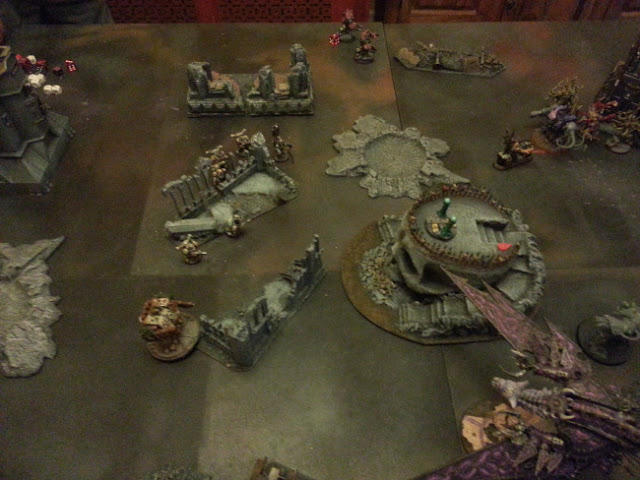 Disaster struck for the Death Guard’s Dreads, as they went crazy and tried to close on the enemy instead of shooting.
The Obliterators took aim at the Predator and blew a Lascannon off of it. The Spawn Charged into the Noise Marines…… 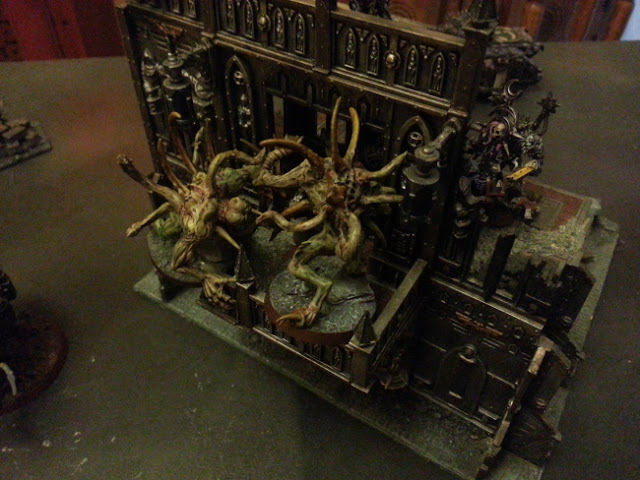 ……Killing three for no loss. Festus Charged into the Dread, stripping a Hull point but losing a wound in the process…. 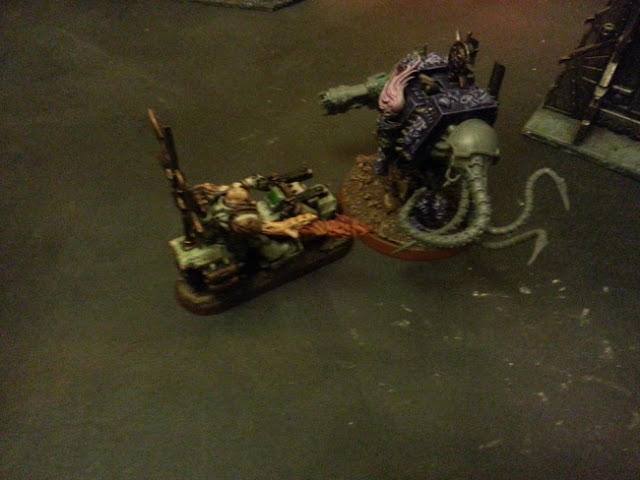 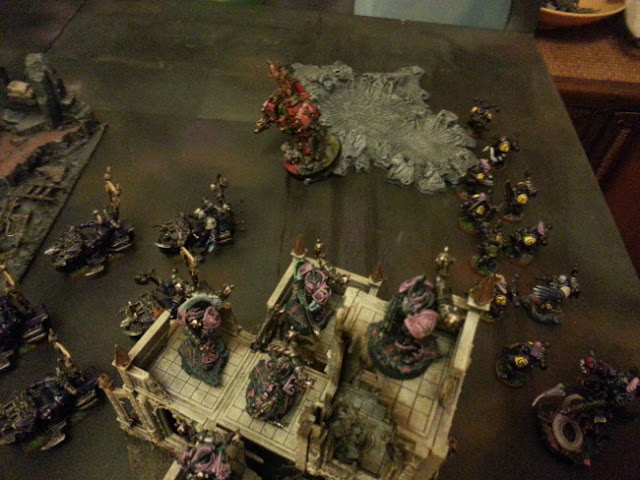 …….The Castigators' Dreads suffered ‘Blood Rage’ and headed for the Nurgle Lord and the Spawn….. 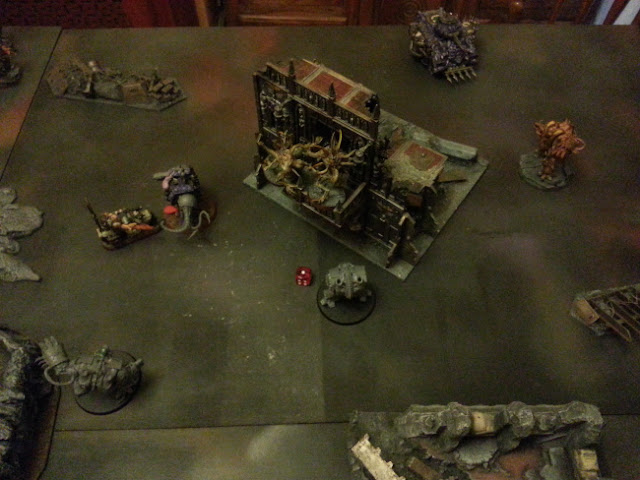 …….the Heldrake vector-striked the Nurgle Dread but did no damage….. 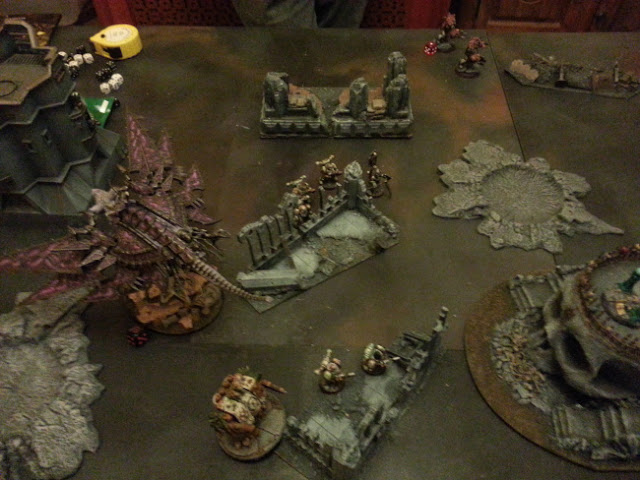 ….The Bikers moved back to help out Nestor with the Nurgle Dread but their Melta guns failed to penetrate its armour…. 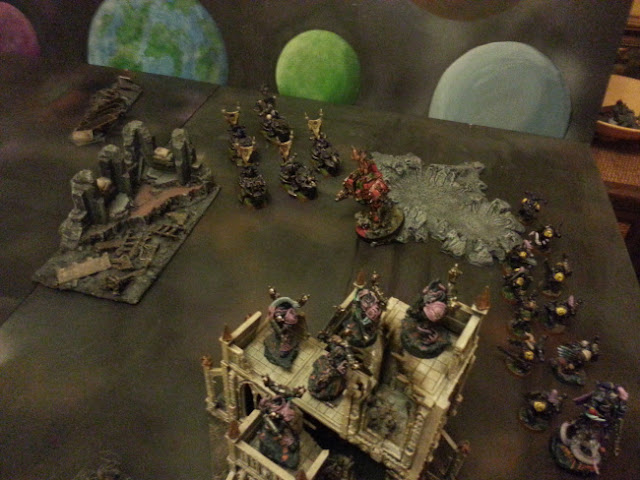 …Fortunately, Nestor’s Chaos Marines were more than capable of destroying it. The Slaanesh Dreads charged into combat putting another wound on Festus and taking a wound from a Spawn. The Plague Lord stripped another hull point from the Plasma Dread to leave it with just one hull point remaining…. 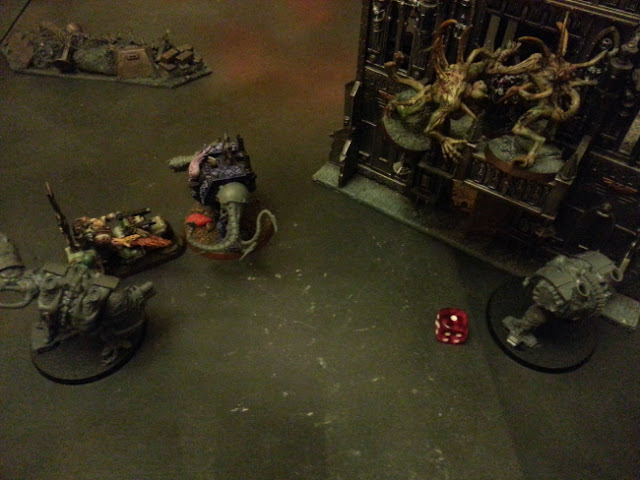 The Death Guard’s Grave Wardens arrived and deepstruck next to the Slaanesh Bikers….. 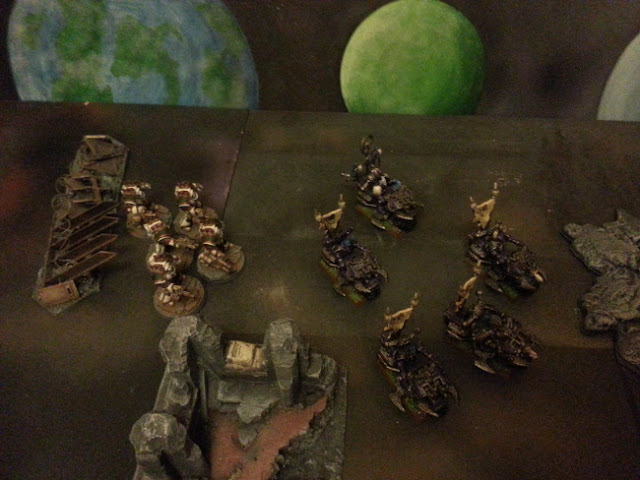 …Gunning one the bikers down….. 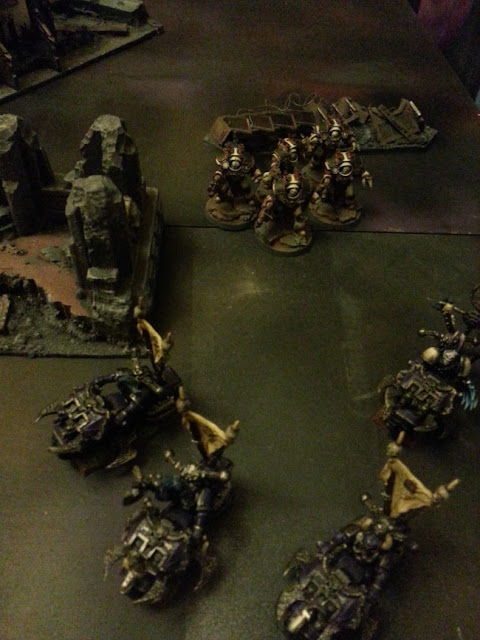 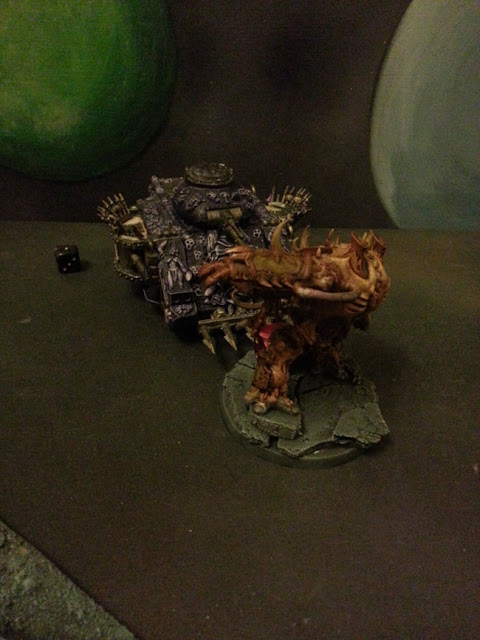 …..To add insult to injury Festus was smashed to the ground by the Slaanesh Helbrutes, as the Spawn failed once again to kill the last Noise Marine.

Turn 4
The Castigators' Helbrutes passed their Crazed roll and moved towards the Obliterators blowing them apart with their Plasma Cannon and Multi-Melta.
The Slaanesh Bikers turbo boosted away from the Grave Wardens. The Vindicator blasted apart the Nurgle Helbrute that had immobilised it and the Predator blew apart the final Nurgle Helbrute with it's Lascannon.
The Heldrake reduced one squad of Plague Marines to two models finishing off a devastating round of shooting for the Castigators. 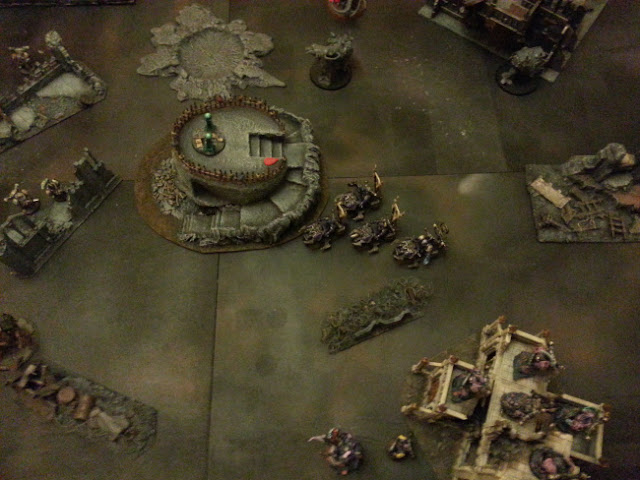 The Death Guard’s Terminators chased after the Bikes as the few remaining Plague Marines moved towards the Relic taking pot shots at the Heldrake as they went…. 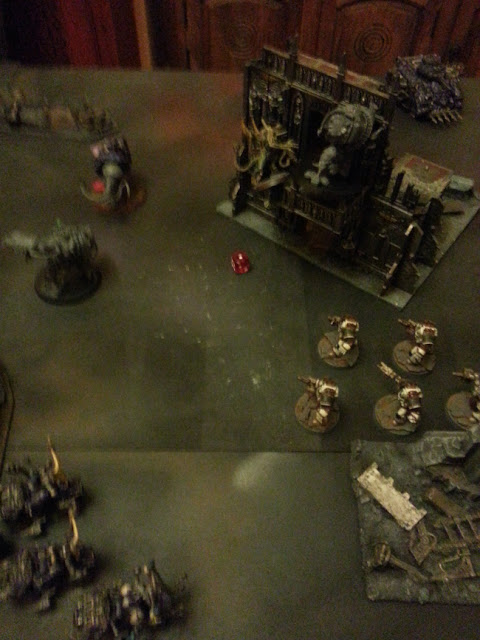 The Spawn finally dragged down the last Noise Marine but the Slaanesh Dread replied by tearing one of them apart.

Turn 5
The Slaanesh Bikers moved over towards the Plague Marines in the centre and Nestor joined them. Everything else levelled their guns at the Death Guard’s Terminators….. 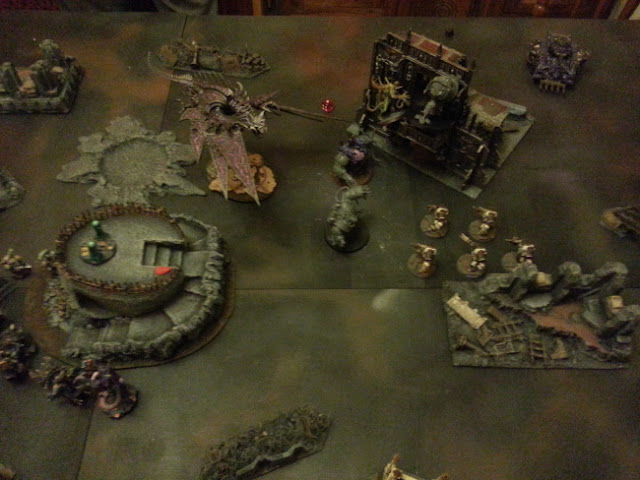 The Slaanesh Bikers wiped out the Plague Marine squad with contemptous ease.
Everything else opened fire on the Terminators wiping them out to a man with the Noise Marines accounting for 3 with their Sonic Blasters!
As the last Spawn was ripped to pieces by the Slaanesh Dread, the Lone Plague Champion, Tosis Mire conceded possession of the Battlefield to the Castigators…… 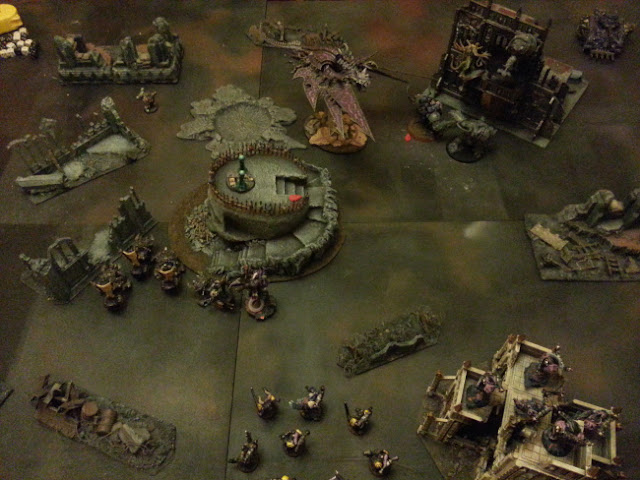 Within hours of the Castigators’ victory, the inhabitants had returned.
A great feast was laid out in their honour and the ruling Medici family lavished their saviours with gifts. Music and laughter echoed throughout the great hall as dancers cavorted with each other in an evocative manner. Slowly the old Medici leader rose to his feet and the celebrations ceased.
“A toast to honour our saviours” said the old man.
Nestor rose to the sound of cheering and applause, basking in the accolades of the ruling nobles. Slowly he held up a hand to stem the applause.
“The Castigators are delighted to rid you of the vile abominations known as the Death Guard, but alas everything has a price, especially freedom.” He said nodding to Darius.
“To help purge this unclean stain from Mammon, Slaanesh has need of your sons and daughters.”

More cheers and applause rang out across the hall, drowning out the noise of the doors slamming shut.
“As for the rest of you….well….my Brothers…..they....they have needs of their own!”
The sound of laughter soon turned to screams.