Rob (my regular gaming buddy and fellow fluffhead) and I have been getting back to our roots and playing for the story rather than playing practice games for tournaments....I suppose GW would call it 'forging a narrative' ;-)
We recently played the mini campaign found in the back of the old 5th edition rulebook, so I thought I'd share how we got on.
Assault On Black Reach Campaign 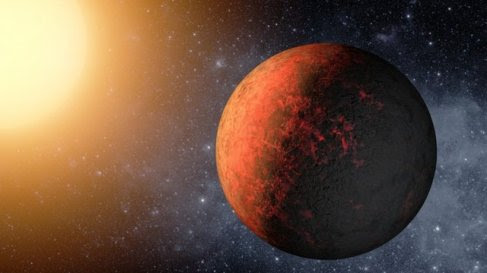 Deep within the Eye of Terror lies Black Reach, a bustling fortified Soulforge World that supplies weapons, armour and the dread Daemon Engines to the Legions and renegade Chapters...for a price!

“Treacherous bastards” cursed Nestor.
He should have known better than to put his faith in the Dark Mechanicum. The payment of sixty thousand souls had already been paid to them for their services, with the agreement of a further sixty thousand on final delivery.
When the Castigators’ fleet had arrived in system, sensors had quickly detected another fleet leaving orbit of the Forge World. It hadn’t taken long to discover that the fleet in question belonged to Festus Foulspawn of the Death Guard.
The fleet had manoeuvred into a standard defensive formation, but weapons had remained powered down, lest they incur the wrath of the Dark Mechanicum’s formidable defence batteries. Orders from the Forge World, had instructed them where to make planet fall and it was no coincidence that they’d landed within a stone’s throw of the Death Guard’s camp.
Within hours skirmishes had erupted over a wide area as both sides had tried to establish a perimeter, which no doubt, was what the Dark Mechanicum wanted.
Nestor wasn’t sure who had shot the Dark Mechanium supply vessel down, but the cargo it contained could prove useful in prioritising his needs and judging by the build-up of forces in the area, Festus Foulspawn thought the same.

Battle 1 - The Spoils Of war
Battle Briefing
This battle forms a 'prologue' to the campaign, taking place before the animosity between the Death Guard and the Castigators escalates to all out war. A skirmish between the two factions resulted in a Dark Mechanicum supply vessel being shot down. Both sides have despatched a force to recover the supplies. Crucially, neither knows for sure what is in each supply container. It won't be until the containers have been delivered to high command, just before the last battle, that the contents will be revealed.
Objective
The objectives represent the supply containers and are placed as described in the Crusade mission from the 6th edition rulebook.
Victory Conditions
At the end of the game the player who has the most objectives wins.
Armies
The Castigators 1000pts
Nestor Lustheart - Chaos Lord, Mark of Slaanesh, Steed & Power Weapon.
Squad Sublime - 10 Noise Marines, 2 Blastmasters, 7 Sonic Blasters, led by Nephran Lustviper with Bolt Pistol & CCW.
Squad Divine - 10 Chaos Space Marines, MOS, 2 Melta Guns led by Darius Lewdgrip with Blot Pistol & Powerfist.
Squad Rapture - 5 Chaos Bikers, MoS, 2 Melta Guns led by Korath Vilehorn with Power Weapon.
Corruptus - Chaos Vindicator
Tantalus - Predator with Autocannon Turret & Lascannon Sponsons.
Death Guard
Festus Blightmaster - Lord, Mark of Nurgle, Palaquin of Nurgle, Sigil of Corruption, Power Weapon.
7 Possessed led by Token Rotgut
10 Cultists, MoN.
10 Cultists, MoN
10 Cultists, MoN
Heldrake
Deployment
We rolled for deployment Rob deployed first with his Lord and Possessed inside a Landraider and a squad of cultists hiding in the ruins. 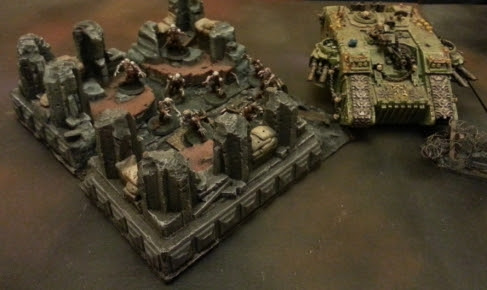 I deployed my Noise Marines centrally behind some debris, with the Vindicator and Bikes on my left and the Chaos Predator on the right. 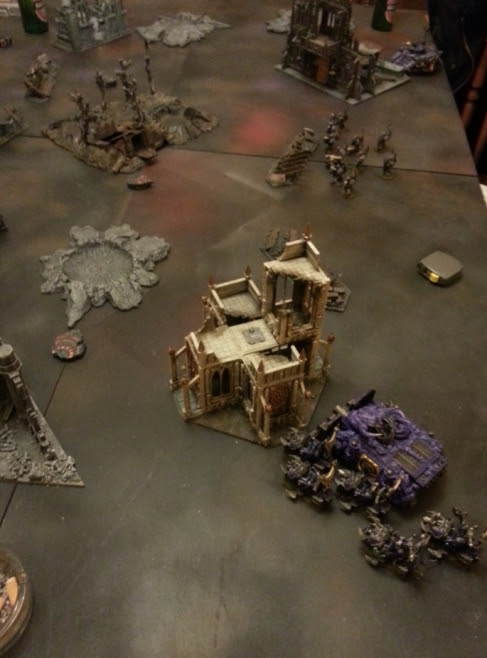 Turn 1
Stealing the initiative the Castigators' Vindicator moved forward to bring the Landraider into range, while the Bike squad turbo boosted forward ready to deal with it the following turn, should it survive. The Predator opened up on the Landraider but it's shots pattered harmlessly off of it's hull. The Vindicator tried it's luck but scattered into the Cultists skulking in the ruins, blasting apart two of the misguided fools. The Noise Marines opened up on the hapless creatures and tore apart another four and it all proved too much for the cultists and they took to the hills. 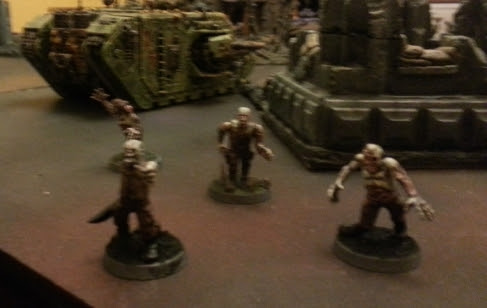 The Death Guard's Landraider moved towards the bikes and out jumped the Lord and his Possessed, it was a gamble on Rob's part as he'd need to roll an 8 through difficult terrain to reach the bikers. The Landraider shot at the Vindicator but failed to do any damage. 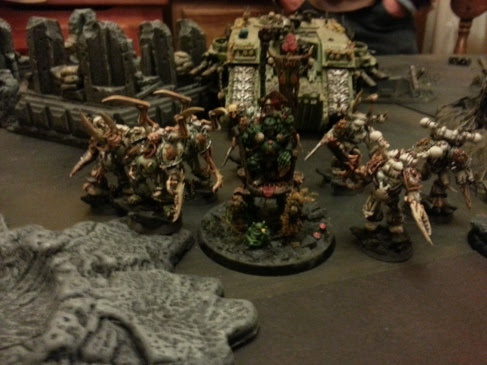 Moving faster than a Nurglite has any right to, Festus and his entourage barrelled into the Slaaneshi bikers, Festus taking a wound from overwatch on the way in (I've no idea why I  thought it was a gamble on Rob's part, he always rolls a minimum of 9 when charging!). 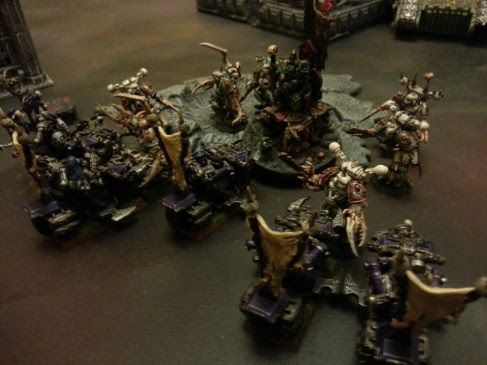 Token Rotgut bellowed a Challenge to Korath Vilehorn, who, readily accepted while the Lord Festus set about butchering the rest of the bike squad. Korath easily parried the pestilent champions clumsy blows, and howling his devotion to 'She Who Thirsts', sliced him apart with his power axe. Looking around at his slaughtered brothers, he decided discretion was the better part of valour and promptly legged it. 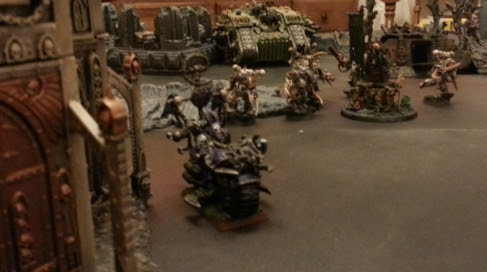 Turn 2
Lord Nestor and his Chaos Space Marines arrived from the left flank and with no targets of opportunity moved towards the nearest objective. 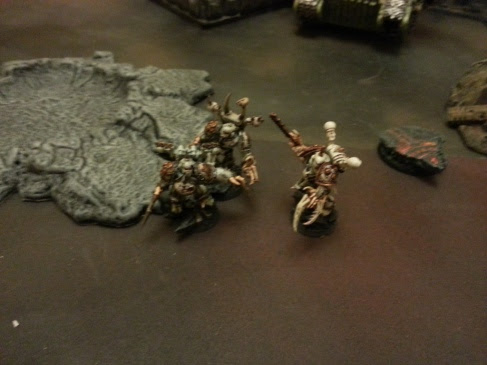 Both of Rob's Cultists squads arrived this turn. One came on the right and made the slow march to the objective whilst the other moved into the ruins beside the Nurgle Landraider. The Possessed made for the Noise Marines. Shooting was limited to the Landraider who one again failed to damage the Vindicator. The Possessed charged into combat against the Noise marines, losing one to overwatch on the way in. Determined to make the Noise Marines pay for the loss of their Lord they hacked down two of them for no loss. 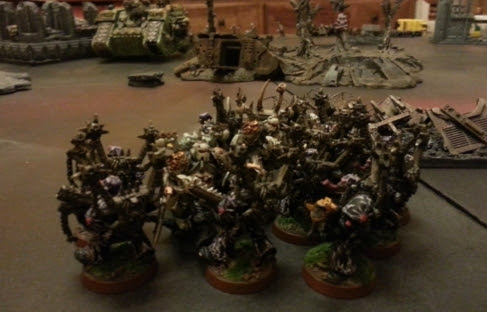 Turn 3
Lord Nestor and His Marines moved towards the Cultists heading for the ruins and in a spectacular display of shooting, reduced them to nothing but body parts! 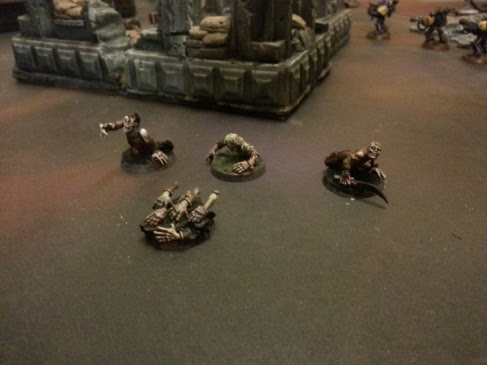 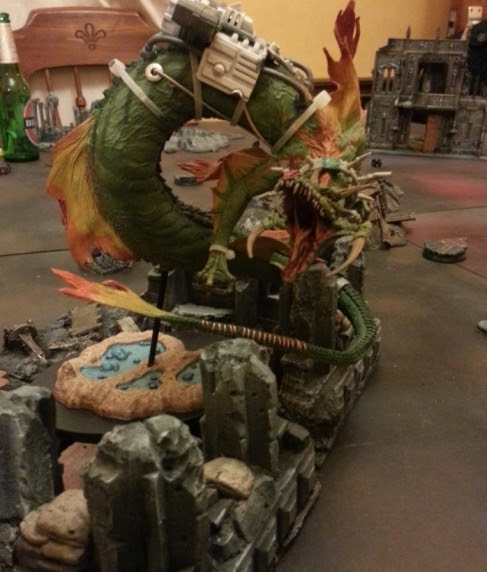 The unit of Cultists moved closer to the objective on the right, painfully aware that they were the only unit in The Death Guard army that was capable of securing an objective. One of the Possessed was cut down by the Noise Marines for no loss.
Turn 4
Nestor and his Squad of Chaos Marines moved towards the Heldrake and attempted to drop the behemoth but their melta guns missed. The Vindicator moved flat-out towards the centre, hoping to get into range of the cultists next turn. The Predator moved over from the right and shot at the Heldrake scoring a penetrating hit against it, but the shot was turned aside by the beast's invulnerable save. The Noise Marines grew weary of the attentions from the Possessed and hacked him down, consolidating towards the objective at the centre of the board.
The Heldrake swooped over to the centre of the board destroying the Vindicator with Vector Strike and burning 4 Noise Marines to a crisp.
Turn 5
Nestor and his squad moved over to claim the left object while the 4 Noise Marines moved onto the middle objective. The Predator moved up and targeted the Heldrake but failed to hit it. The Noise Marines fired their Blastmasters in assault mode and killed 2 of the Cultists, not enough to force a morale check....curses!
The Heldrake moved over the Noise Marines killing two with Vector Strike and toasting the remaining two with it's Baleflamer. The Cultists shuffled over to claim the right objective 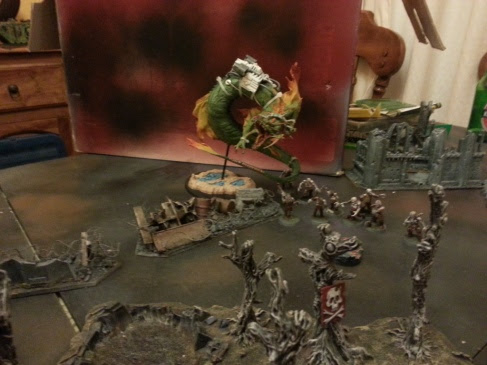 We rolled to see if the game continued and the game ended......Draw.
As dusk began to fall Nestor looked around at the carnage. Charred bodies lay all around, their twisted faces staring accusingly at the sky through sightless eyes.
As he searched the battlefield for the enemy, the sound of heavy gun ships could be heard over the din of battle. "The Dark Mechanicum come to claim their property" he thought to himself. Opening a Comm channel he gave the order to his remaining force to pull out.
How long had the Death Guard been here? Long enough to have acquired a Heldrake, he thought to himself.
"Treacherous Bastards" he muttered to no one in particular.
Posted by Castigator at 06:40