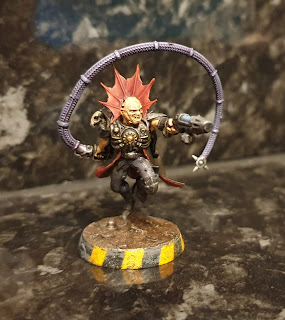 Flynn should have become the 13th viscount of Montoya of the house Catallus after his farthers murder but he renounced his title and cut short his spyrer hunt into the Ash wastes on hearing of his father's death. Swearing he would not complete his kill tally in the wastes until he exacted vengeance on everyone involved. 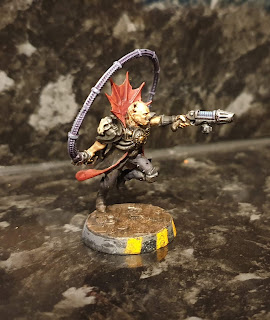 His search for the assassin responsable for the death of his father has brought him down into the grizzly belly of the hive but he is no spire brat funning it down-hive. Even striped of his spyrer battlesuit he is a formidable combat veteran and his families vast wealth and connections grant him access to exquisite weapons and armour.

The only clue he has to go on in his search is a fuzzy pict image of a female assassin dressed in red over which he swore his oath. My name is Flynnigo Montoya, you killed my father, prepare to die!
Posted by RobKanci at 01:57