Greetings Sinners!
It's been quite awhile since I last posted. I'd like to say I had very good reasons for this, but the truth is, is that my enthusiasm for 7th edition has waned considerably over the last few months.

Ennui
noun
1. A feeling of utter weariness and discontent resulting from satiety or lack of interest; boredom:

It's the curse that haunts all disciples of Slaanesh, but slowly, ever so slowly, my mojo is returning once more. A couple of things have brought about this dissatisfaction with 7th edition.
The main reason was the state of the Tournament scene.
I've always enjoyed tournaments, they're great places to meet up with old friends, or make new ones; and what could be better than spending a weekend chatting to like minded people over a few beers?
Unfortunately (for me), most UK tournaments have become ETC clone events that are all about throwing the background out of the window and designing lists that stack as many USR's (Universal Special Rules) as possible into them and using a myriad of sources to do so. This Stackhammer isn't my thing. Because of this, I'll only attend events that offer something different to the norm, which has led to another problem.

I have recently changed my shift pattern from days, to Continental days and nights. This has been a major cultural change for me. The few events that I have fancied have fallen on weekends when I've been working, and to make matters even worse, my shift patterns have played havoc with my regular games with Rob.
These are the main reasons I haven't been posting, but there is one other reason that has seen 40k take a back seat, 8th edition is only 6 months away.
I've heard from multiple sources that it will be out in May and that there will be quite a few changes. I'm not going to go into what I've been told, but look at any rumour site and they're all pretty much spot on with what they're saying (the background is about to get very interesting!). Anyway, I'm not a rumour site, so enough of all that, but because of what I've heard, I'm refusing to purchase anything else until 8th is released.......although I will be getting the Chaos Legions supplement.....and maybe Fenris part 2......the new Thousand Sons are not without their charms, so maybe......no, no, I refuse to buy anything else.....honest ;-)

So that's all of my whining out of the way and I apologise for moaning and the lack of updates......before I forget, I would just like to thank all of the people who contacted me, concerned by my absence. It's nice to know that some people have missed me and I really appreciate you getting in touch.

So what's next for our intrepid hero?
While I haven't been blogging or playing much over the last few months, I have been immersing myself in the evocative background and imagery of 40k. The Grimdark is a fascinating place, full of wonder and terror in equal measure.
I've been thinking how I want to incorporate that into my gaming world. The miniatures speak for themselves, GW make some truly evocative miniatures that I'm sure we all enjoy.....well, apart from Tau, I really dislike the aesthetics of the fish-heads....and I'm not too keen on how brutal they are in the game as well ;-) No, I'm talking about the world in which the game is set, the background to the background so to speak. Gothic architecture, industrial complexes, dark and brooding corridors or the cluttered multi-levelled Underhive.


Some battlefields can be a bit uninspiring at times; we spend so much time and money on our miniatures that we often overlook the battlefield itself. I'm as guilty of it as the next person. As much as I like tournaments, 40k has always been about the imagery and the story element rather than winning games.....although that can be nice as well ;-).
Smaller point games such as Path to Glory, Kill Team or Heralds of Ruin (a fan based set of rules that are far superior to Kill Team) really benefit from terrain that captures the imagination.
With that in mind, I have begun work on a small mining refinery that I hope will tempt Rob from his hibernation.

Rob gave me some Mantic buildings that he had knocking around with the infamous words of "Fancy a bit of a project?" a while ago, so I thought I'd put them to good use.

These are very early work in progress shots, so please bare that in mind. I'm still toying around with names for this little project....Prospect City is a working title, so if anybody has any suggestions, please feel free to share. 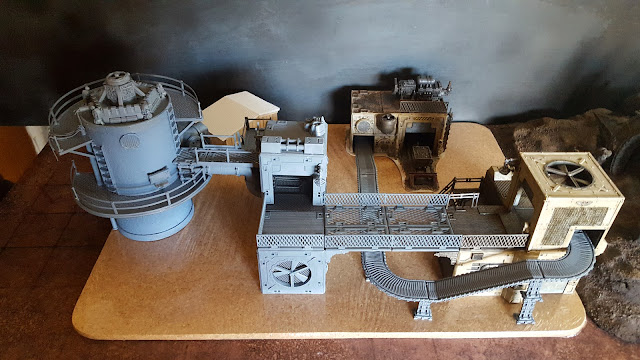 I wanted to incorporate as many different levels as I could. Various levels will be great for smaller games and will offer cover for larger games of 40k. 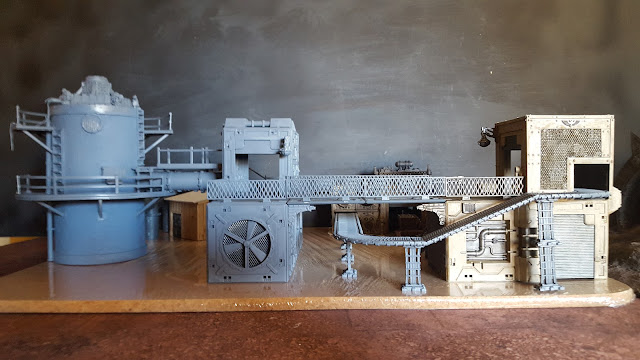 The walkway going across the conveyor belt is magnetised. That's because the base will be cut in half for ease of storage. 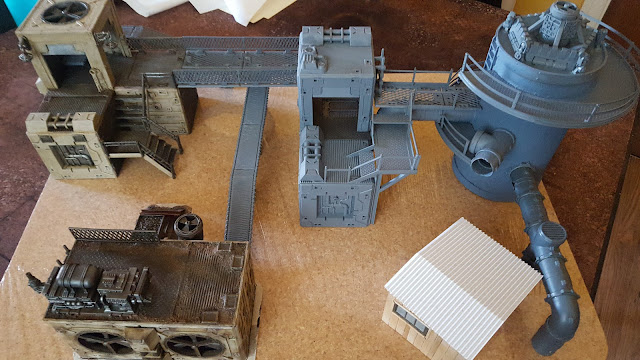 I intend to build additional 'tiles' to add to it. I'm aiming for a 4'x4' board eventually, some will be more cluttered than others. 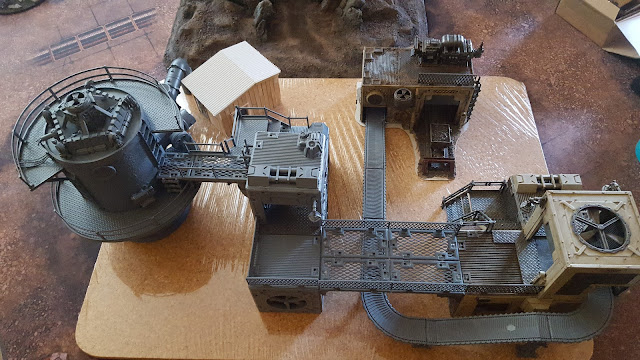 This is the building that houses the mine shaft..... 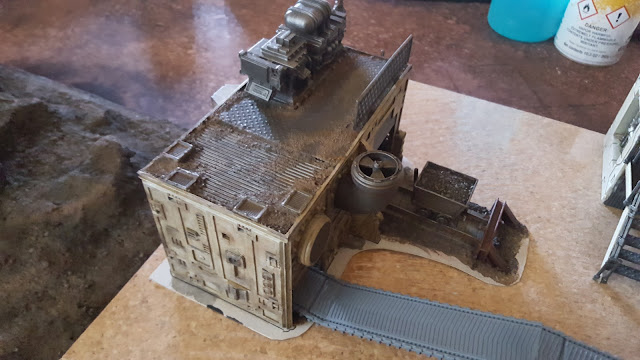 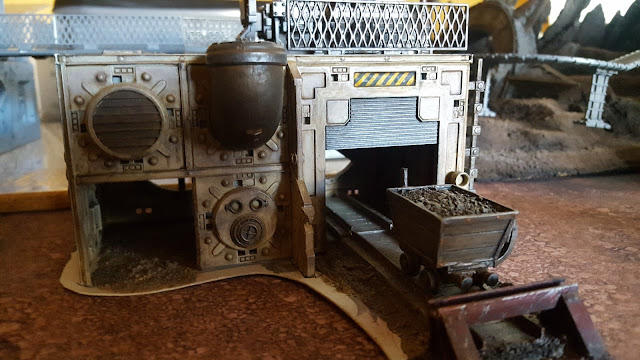 Plenty of ventilation for those unfortunate enough to work below. 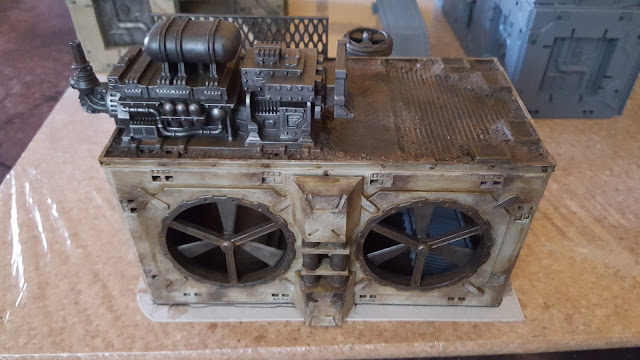 You can just make out the mine shaft lift inside. 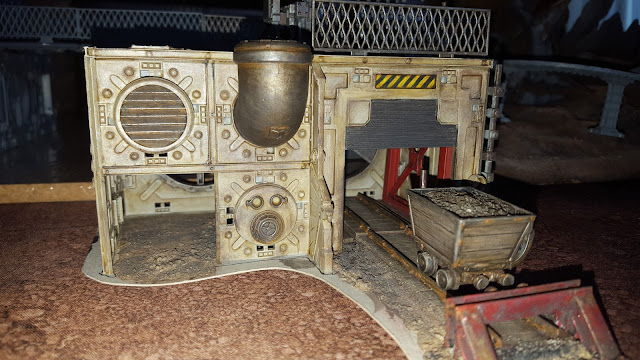 So that's what I'm working on at the moment.
My next post will be all about the Caledonian Highlander event that I went to last weekend. I promise you won't have to wait quite as long for that post.....honest!
Until next time.....may Our Lady grant you her number!
Posted by Castigator (Gary) at 09:34