The Tournament Conundrum - Musings of a chaotic mind 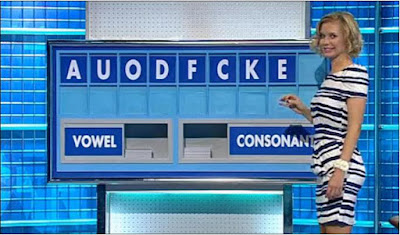 Greetings sinners!
Tournaments have been few and far between for me this year. As a dedicated Chaos Space Marine player that insists on hamstringing himself with self-imposed restrictions, the lack of events that allow Forge World has seriously hampered my options. Fortunately, GW have been busy of late and have given Chaos Space Marines something to help them out....


.....First off, let me just say that I do think Chaos Space Marines can compete at a competitive level, it's just that I don't want to use a mixed god list that relies heavily on Psychic powers. My Castigators are strictly Slaanesh/Unmarked and I find a lot of the psychic shenanigans incredibly boring.....See what I mean about self-imposed restrictions? Because of this I've always looked to Forge World to play at a competitive level. Alas, here in the UK, the vast majority of events slavishly follow the ETC rule-set, so Forge World hasn't been an option and my tournament conundrum has had me stumped.
Fortunately, Tzeentch must be in the ascendency, because change is in the air! 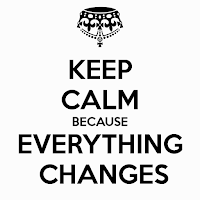 Changes have come thick and fast in the last few Months, first we had Curse of the Wulfen, then this little lot arrived. 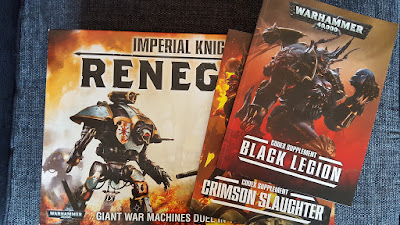 Chaos Space Marines received updated supplements and Renegade Knights which offer much needed options for our long war.
The Crimson Slaughter supplement was a little disappointing from a competitive perspective. They lost Draznicht and had him replaced by a Possessed formation tax. The Slaughter Cult (Dark Apostle with Cultists that get back up) is probably the best of their formations but the Disciples of Mannon (Sorcerer with Possessed that will usually get a random Tzeentch Daemon unit once per game) looks interesting. Overall it isn't going to radically change the way they operate any time soon.
I like my Chaos Lord to have a 2+ armour save on his bike, so I'll still be using the Crimson Slaughter rules as my primary detachment.
The Black Legion supplement is definitely the winner here, but unfortunately for me it doesn't suit my background or my preferred play style. The Cyclopia Cabal (3-5 Sorcerers with a pseudo Puppet Master) will be a regular in a lot of Chaos lists, especially Khorne Daemonkin....Oh, what I wouldn't give for a Slaanesh Daemonkin Codex!
Hands down, the real biggie is the Renegade Knight data-sheet.
Ever since the release of the Imperial Knight, Chaos players have been screaming for a Chaos equivalent, well now they finally have it. Chaos Space Marines have really struggled against Deathstars and Lords of War and the welcome addition of their own Lord of War really helps us out. The Renegade weapon options are actually better than their loyalist counterpart thanks to their ability to put a ranged weapon on each arm. Without a doubt, this will become a must take for Chaos Space Marines.
This really lets me compete in the tournament scene. So what if an event doesn't allow Forge World? I can still take something to help me out against all those invisible Deathstars that regularly smash my army apart....Okay it might not stop them dead, but it will slow them down and relieve some of the pressure that my Castigators have to face.

It's probably just as well that the Renegade Knight was released because the latest offering from GW has the potential to wreck my current competitive army.... 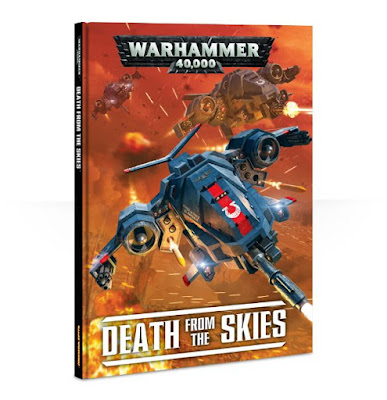 From a purely selfish point of view, I hope Tournaments ignore this supplement. The rule changes it contains have serious consequences for my competitive army. My 1850pt list includes a Fire Raptor, Heldrake, Dreadclaw & Helblade. All of the Forge World flyers are obsolete unless FW releases an Errata for them. That's 440pts that I can no longer use.....Ouch!
Even if FW release an Errata for their flyers, I'm pretty sure that my Fire Raptor will lose its Skyfire ability, which is primarily why I bought it in the first place (that and it just looks so damn cool!).
Flying Monstrous Creatures will be happy, because this supplement makes them much more survivable to enemy flyer fire power. What is it they say?....One door opens another door closes ;-)

As if this wasn't enough to contend with, GW, busy little bees that they are, haven't finished yet. They're currently working on new FAQ's. They're still in the draft stage but from what I've seen of them so far, they look pretty good.
There are a few that will change things around a bit (if they come to pass). Only one grenade in close combat, not being able to start in an ally's transport & restricting Battle Brother shenanigans being the ones that jumped out at me.
The FAQ's are okay from a Chaos Space Marine perspective. We could never pull off the Battle Brother shenanigans that our loyalist cousins get up to (until KDK came along and for me Khorne isn't an option), so whatever hurts them makes us stronger. The one grenade in combat rule actually helps out our Maulerfiends and makes them a bit more survivable, no more being krak'd to death. Drop Podding Battle Brothers have been seriously hit, so no more Culexus Assassins borrowing a Blood Angel drop pods. This could have a detrimental effect for me. I abhor psychic armies and I was hoping to see the Culexus become more prominent and reduce their number. I think the Culexus just took a huge hit.
So where does all that leave me? 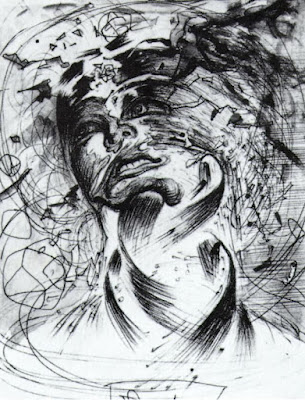 It leaves me needing to pull my finger out and get some stuff painted pretty damn quickly!
I have a bad feeling my flyers are about to be hit for six so I need to get something to replace them.
The first choice will be a Renegade Knight. I have a Chaos Knight that is painted to table top standard that I can use for now, so that gives me some breathing space.
The obvious choice would be to design a list around the Cyclopia Cabal. My personal opinion on this unit is that it works great for KDK but that it's too expensive for a Chaos Space Marine army to get the best out of it.
So that leaves me with my old friend and ally......Chaos Daemons! 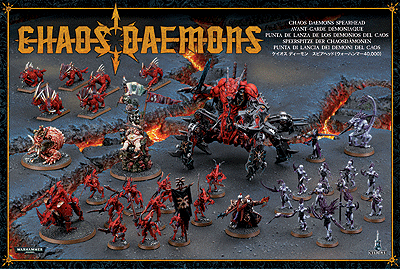 I love daemons and Slaanesh daemons are some of the best looking models out there in my opinion. Unfortunately, I'm don't really enjoy painting them. It's not that I don't enjoy painting the odd unit or two, but I hate painting a lot of them, and if experience has taught me one thing, it's that I need a lot of them to make them work......or do I? 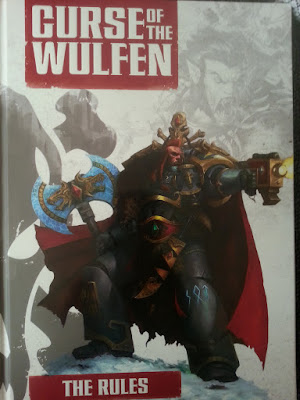 Curse of the Wulfen introduced some interesting options for Daemons. Obviously, I'm only interested in Slaanesh so that reduces these options a bit.
The Forgehost immediately jumped out at me, I mean, what's not to love about 3 Soul Grinders of Slaanesh running around spreading the love? Throw in a Renegade Knight and that's a lot of armour for the enemy to deal with.
I was pretty sure I had 3 Soul Grinders lying around, so I decided to see just how many daemons infest my house, the result surprised and shocked me. Now we're all secret hoarders at heart, but I can honestly say I was a little embarrassed at just how many I had.
3 Soul Grinders
40 Daemonettes
20 Furies of Slaanesh
9 Fiends of Slaanesh
3 Daemon Princes
The Masque
2 Heralds of Slaanesh
25 Seekers of Slaanesh
6 Seeker Chariots of Slaanesh
That's not an ally, that's a full blown army!

With all that little lot, I returned to the Daemon dex and CotW to see what else I could use in my battle to spread Our Lady's divine message to all the infidels out there.
The Forgehost was definitely an option, but it seems a bit slow and each of them can be dropped by one shot. I was thinking I need to add faster units that offer a distraction but can still cause damage if they become isolated from the main bulk of my army. The answer to this was the Grande Cavalcade. 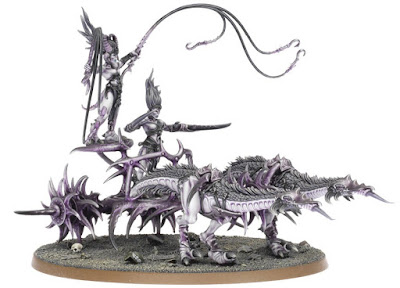 I had to brush up on my Chariot rules, as the only experience I'd had with them was when fighting against Necrons. The quick and dirty run-down on them is that they:
Move 12" - Reasonably quick.
Armour 11/11/10 - Pretty much immune to strength 4 apart from the rear.
Open Topped - Penetrating hits receive +1 on the damage chart.
Fast Vehicle - Can flat out 12" to give them 24" overall movement
Cannot be immobilised -They count all immobilised results as Crew Stunned instead.
Shooting at Chariots - The chariot owner chooses whether the shots hit the chariot or the rider.
Chariots and Assaults - The Attacker chooses the chariot or the rider for his attacks. He cannot hit the rear of the chariot because of the rider.
Hammer of Wrath - Normally Chariots gain d6 HoW HITS on the charge.
A chariot can reroll one or more dice when charging, so it essentially has Fleet.

The Seeker Cavalcade has additional rules:
Daemon - A 5 up Invulnerable is always nice.
Deepstrike - I can't think of a single reason to use this ability.
Daemonic Instability - They're likely to disappear if they don't win combat.
Fleshshredder - Instead of d6 HoW hits at strength 6 AP-, they get d6 per hull point at strength 4, Rending. so a Seeker Chariot with 2 Hull Points will have 2d6 HITS at initiative 10, that Rend.

And the price for all of this? 40pts per chariot!
SOLD...to the man in the leather spanking pants!

Now I'm sure you can see the merits of the Seeker Chariot. All of these rules add up to create a very tasty option.
Their speed means they can cover ground incredibly quickly. Gun lines will have one turn, maybe two to get rid of them.
Their durability against Grav weapons is enough to give Centurions kittens. If they use Grav the hits go on the rider needing 6's to wound.
Invisible units won't like taking up to 3d6 rending hits per chariot on the charge....followed up by another 5 WS5 rending attacks.
Okay, they're pretty much guaranteed to give up first blood, but at 40pts per chariot, so what?

Of course, there is another problem. Building and painting all those chariots and Seekers fills me with dread! Fortunately, I have a few days off, so I'll see just how quickly I can build and paint these babies.
Expect to see an update on how I'm progressing in a couple of days time, until then......may Our Lady grant you her number ;-)