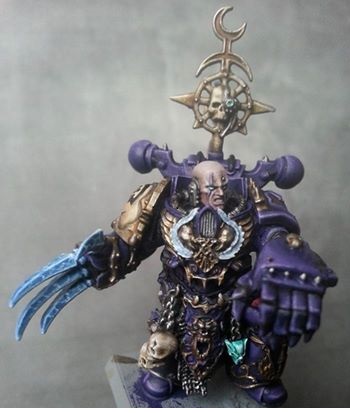 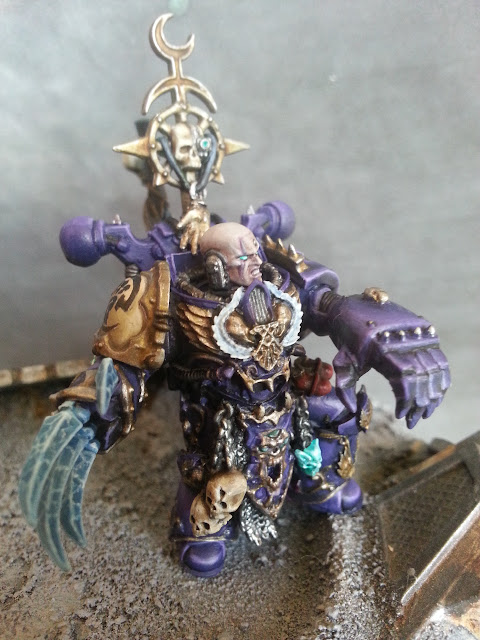 Clad in ancient Mk.IV armour and embellished by the finest of artificers, Nestor's armour is enough to put an Emperor's Children to shame. Though in actual fact, his armour originally belonged to his 'brother', Vorlath of the III Legion.
Nestor and Vorlath fought side by side against the Craftworld Eldar of Saim Hann centuries ago, reaping many Eldar souls for their 'Lady'. Several collaborative ventures followed their initial success, to the point that one would rarely be seen without the other. Over this time Vorlath and Nestor shared their knowledge of the Dark Prince, each of them reliving experiences through one another's eyes.
Concerned that Nestor was being led down the same path that had seen the Castigators almost torn apart under the previous Chapter Master, Lucian, the Castigators' Chief Sorcerer, set in play a series of events that would see the 'Brothers' become sworn enemies.
Lucian's plan worked almost too well, but eventually, after many years the Castigators crushed Vorlath's warband. Vorlath himself was stripped naked and cast into the Six Hells of Slaanesh.
Nestor wears three things to remind himself of his fallen brother, Vorlath's armour, Vorlath's right hand that he took from him and the scar that Vorlath's blade left from that fateful duel. 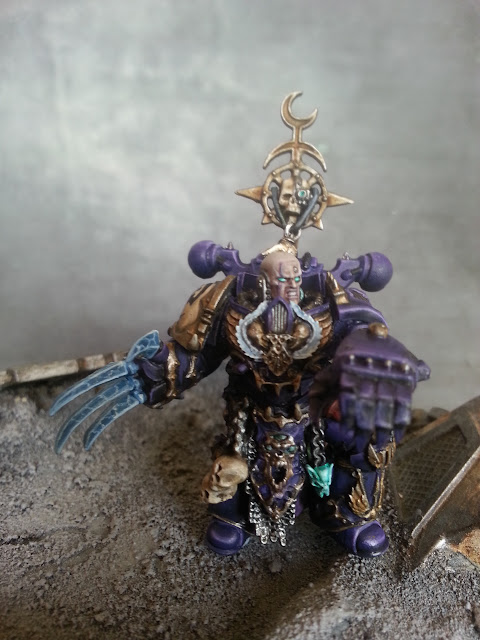 Nestor still favours his ancient Lightning Claw given to him by Lucian from his days as an Aspiring Champion of Squad Divine. Since his ascension to Chapter Master, Nestor usually wears the Power Fist that belonged to his predecessor Selenus.
Trophies, fetishes and tokens adorn Nestor's armour, and while not unusual for a follower of the Dark Gods, there is no doubt that Nestor's time spent with the Night Lords has exacerbated this trend. It was Tarraq Darkblood of the VIIIth Legion that found Nestor deep within the Eye of Terror and eventually reunited him with the Castigators. Bonds of brotherhood still exist between the VIIIth Legion and the Castigators. Nestor wears a jade bat's head charm given to him by Toarraq and the two have fought many campaigns alongside each other. 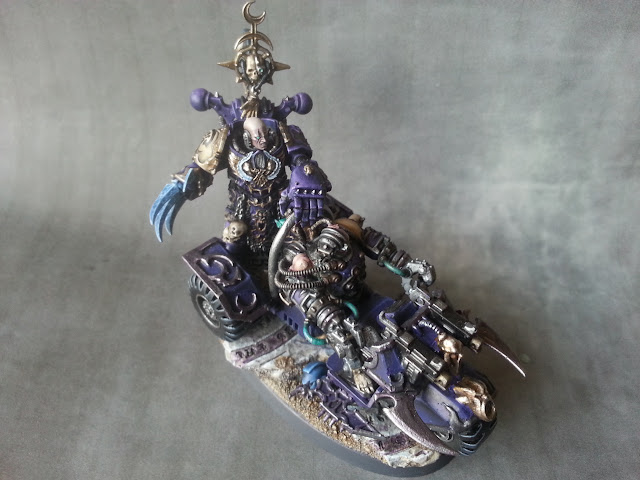 The Night Lords were, and largely still are, misotheists. Because of this, many exiles from the VIIIth seek sanctuary with the Castigators. Indeed, Korath Vilehorn, Aspiring Champion of Squad Schadenfreude was one such exile. Gifted by the Dark Prince with a Daemonic visage, Korath was shunned by his Brothers in the VIIIth and joined the Castigators. 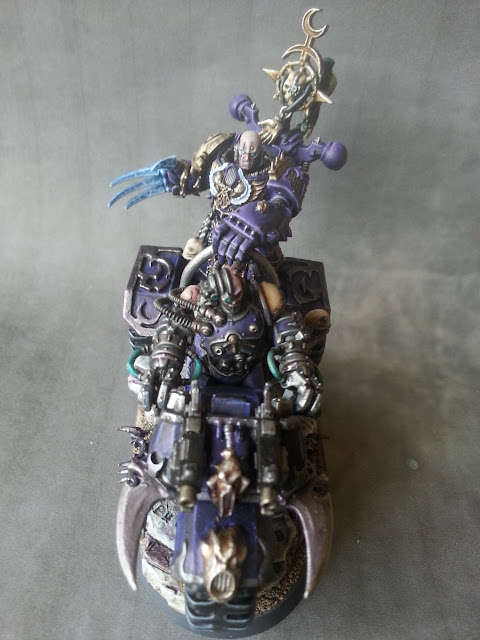 The Night Lords are not the only Legion to swell the ranks of the Castigators. Imperial Fists, Black Templars and Crimson Fists have succumbed to Slaanesh's caress; although most of them have had little choice in the matter. Not surprisingly, some Emperor's Children have pledged their service to the Castigators, with many coming from Vorlath's old warband. More surprising is the influx of White Scars that have joined the ranks of the Chapter's Hellrider cult. Perhaps their joy of riding and of the hunt has eclipsed all other sensations and has spiralled into a dark obsession or maybe the White Scars' Geneseed is not as pure as it is thought? 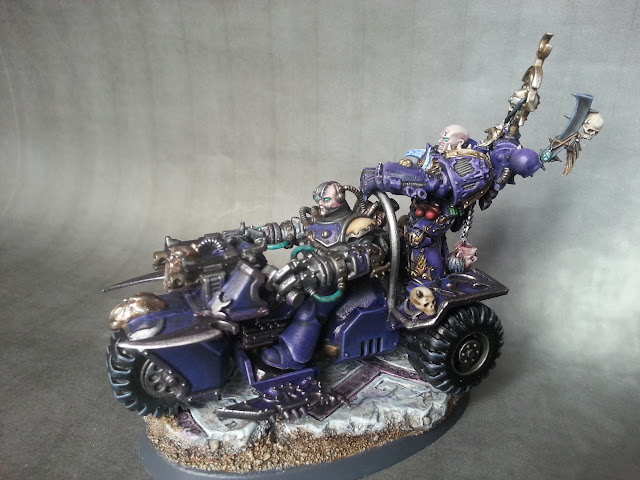 It was from this influx of White Scars that Nestor's new mechanical steed was borne.
Choban was born to ride, his skill with a bike was not only unsurpassed within Squad Schadenfreude, it was unsurpassed by by anyone within the Chapter. The former White Scar took every opportunity to impress with his skills and Korath Vilehorn knew that it would be only a matter of time before Choban challenged him to lead Schadenfreude.
When the challenge came, it came in the form of a race. Six laps around the Chapter's training circuit, no ranged weaponry, but close combat weapons would be allowed, whoever completed the six laps first would lead Squad Schadenfreude. 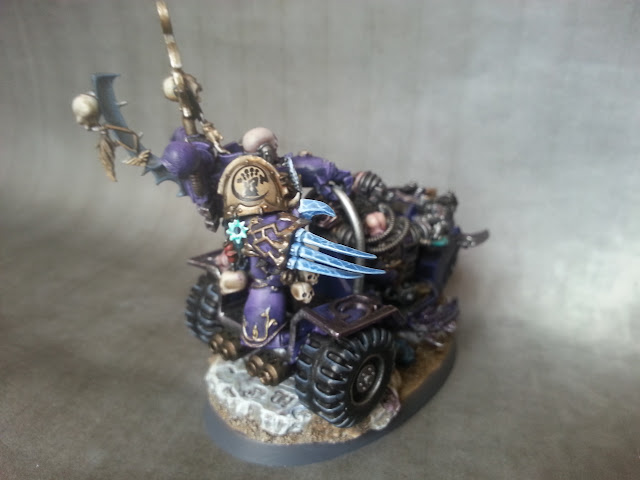 It was evident right from the start that Korath couldn't keep up with Choban. The former White Scar ducked and weaved around Korath, his Falchion bypassing the former Night Lord's defences with ease. Every time Korath attempted to strike Choban, the former White Scar would weave around his quarry, denying him a target.
Korath attempted to ram his adversary into the wall, but in a breath-taking move, Choban lifted the front of his bike to swing it towards Korath's exposed head. The Aspiring Champion ducked, momentarily losing control of his bike and narrowly avoiding the Quintain Servitor seeking to unseat him from his mount. Choban accelerated away as Korath struggled to control his bike.
Righting his mechanical steed, Korath opened the throttle in an attempt to close the distance. The chime ringing out across the circuit told Korath all he needed to know on his adversary, Choban had completed the first lap while Korath had barely completed two thirds of the circuit.
Again and again and again the chimes rang out, Choban had completed four laps as Korath lagged further behind. The former Night Lord eased off on the throttle, clearly waiting for Choban to lap him.
The former White Scar grinned as Korath came into view, confident of his victory Choban goaded him as he pulled alongside. With lightning speed, Korath lashed out at him but Choban was ready. The White Scar weaved inside raising has Falchion as Korath swung with all his might. The blade bit deep into Korath's elbow and the Night Lord's own momentum did the rest; Korath's power sword and forearm clattered to the floor as the White Scar roared ahead. 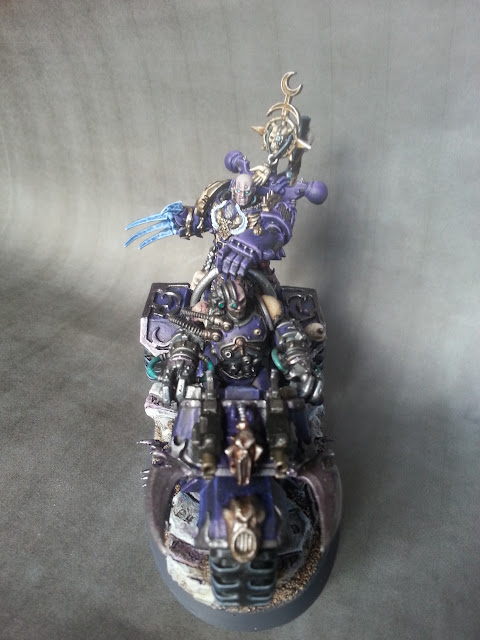 Korath was still struggling to control his bike as the 5th chime rang out indicating that Choban was on his final lap. The former Night Lord laughed at the realisation that he would be lapped twice by his adversary. He was still laughing as Choban pulled alongside him for the final time.
The former White Scar leisurely drew his blade as he closed with his quarry, Korath struggled to keep his bike stable as Choban moved in once more. The blade slashed down at Korath's remaining arm, his adversary wanted to belittle him, make him let go of his steed and finish the race unseated. Instead Korath ducked forward in his saddle, his head perilously close to his own front wheel and took the blow on his power pack.
Choban laughed as he pulled his Falchion back, drawing the two bikes closer still. Still crouched in his saddle Korath jerked his head back. Chobans laugh died in his throat as Korath's horns punctured his opponents mudguard and shredded the former White Scar's front wheel.
The bike flipped into the air, unseating Choban and flinging him in front of Korath's bike.
Korath Vilehorn, Aspiring Champion of Squad Schadenfreude, opened up the throttle. His steed's scythes did the rest, leaving Choban a mangled ruin in his wake. 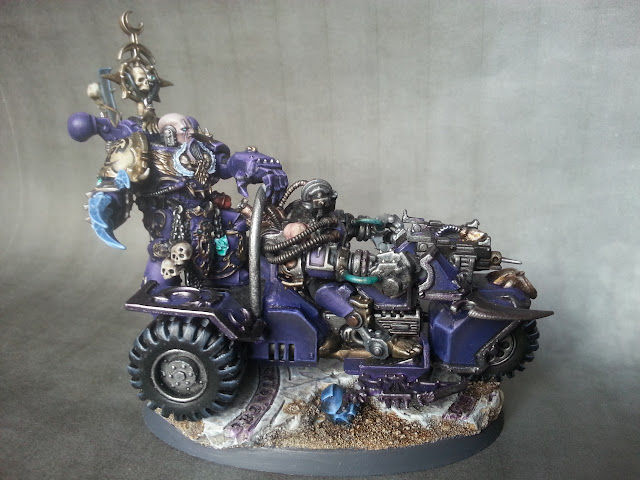 Despite Korath's suggestion that the mangled remains of Choban be interred within the sarcophagus of a Dreadnought, the Castigator's Fleshsmiths insisted that the former White Scar could be rebuilt to better serve the Chapter. After extensive surgery, Choban was given the honour of serving his Chapter Master and much to Korath's annoyance, regularly rides with Squad Schadenfreude! 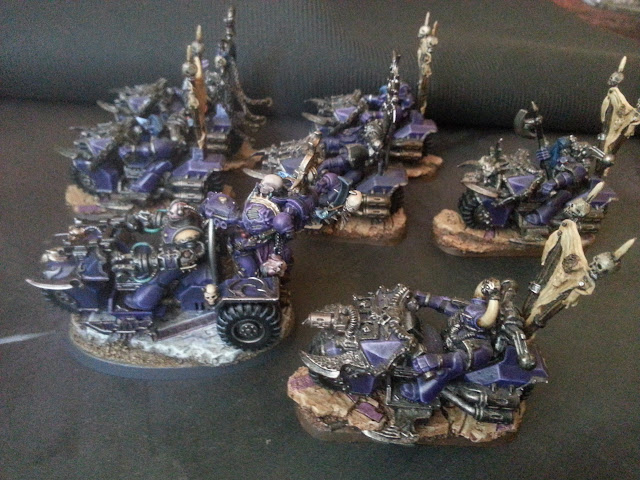 Until next time......may Our Lady grant you her number!