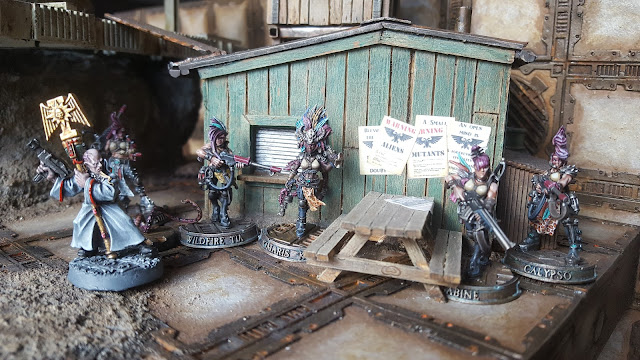 Sully massaged her temples in an attempt to relieve the needle-like pain behind her eyes. The Dolls seemed completely enthralled by Jared Blaine's incessant chatter and yet Sully had an uncontrollable urge to put a Las round between his eyes. On and on he jabbered, each word boring into her head. She looked at each of her sisters in turn, all of them hanging on his every word; all of them except for Kat that is.
The Escher champion stroked the grip of her power sword, seemingly indifferent to Blaine's patter. Yet Sully recognised the expression she wore and despite Kat's best efforts she realised that the champion was anything but indifferent.
As if aware of his predicament Blaine turned his attention to Kat.
"As well travelled as I am, I recognise your attire my dear. Yours must be an interesting tale and one I would be keen to hear" he purred, flashing a smile.
Kat met his gaze, her jaw clenching as his eyes bore into hers.
"If you recognise my garments." she replied  "Then you know that your cheap parlour tricks won't work on me Wyrd!"
The Escher champion leapt to her feet pointing her needle pistol at him and activating her power sword at the same instant that Blaine raised his Autopistol.
"I've been wanting to stick my blade in you ever since I laid eyes on you." whispered Sully into Blaine's ear as her blade pressed against his throat. 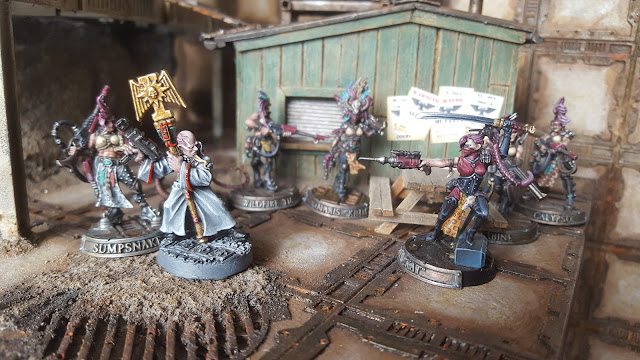 A deep, resonant chuckle filled the air and of all of them turned in search of the source.
"Well Jared, it appears that you've bitten off more than you can chew this time." said a robed figure emerging from the shadows. 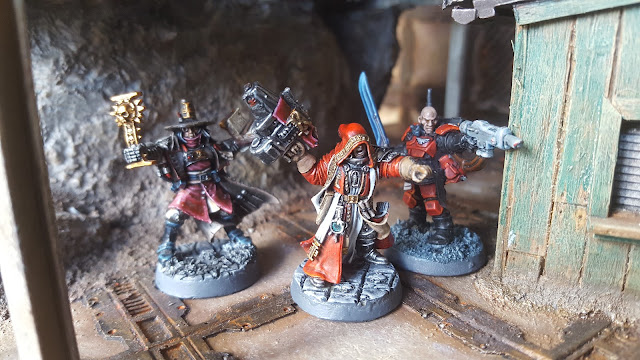 Two individuals flanked the stranger, one was obviously a military man and the other appeared to be some sort of missionary or preacher.
"Please forgive my colleague ladies" said the stranger. "Jared can be trying, even at the best of times, but he has his uses."
Blaine shrugged and offered a rueful smile.
"Allow me to introduce myself. My name is Boris, Boris Dragosani.... 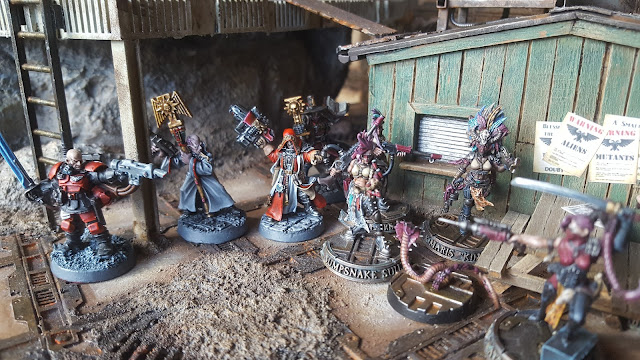 ...and by order of His most holy Inquisition, I have a use for you!" 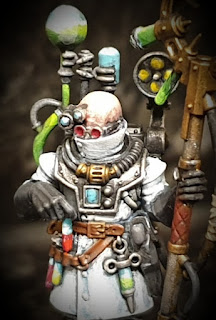 "Everybody knows him as Doc rather than Fellon Black, but yeah that's him." Said Brigitte as she handed back the heavily redacted file to Dragosani.
The Inquisitor smiled "Jared assures me that you can provide my colleagues and I with safe passage to Black's lair."
"We can provide passage through the Kindred's territory, I never said it would be safe." replied the Escher leader with a grin.
Dragosani nodded "I'm more than capable of looking after myself."
"No doubt" she thought as they readied their equipment. "But what will be the cost for the Voodoo Dolls?" 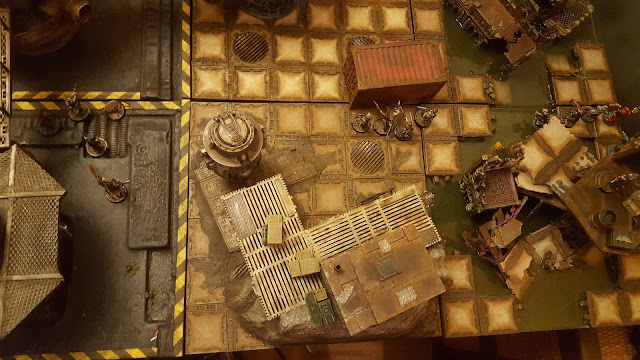 The Voodoo Dolls loaded the centre of the settlement with the Inquisitor and his entourage on the right.
Longpoke Kari covered the centre with her Long-las. 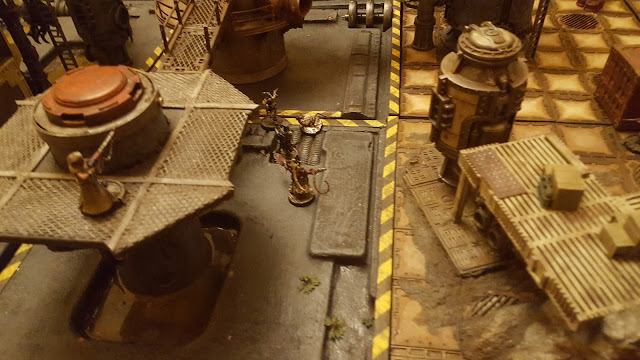 The Kindred spread out across their territory, eager to repel the trespassers. 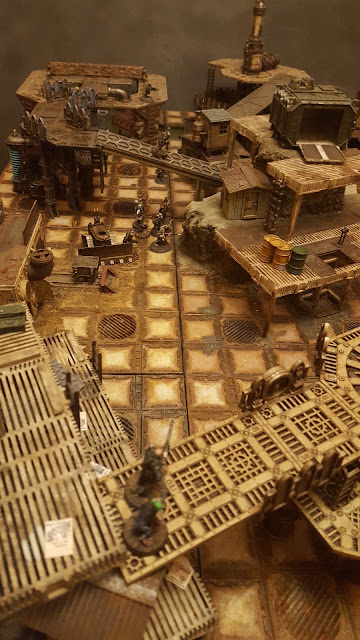 The Dolls threw smoke grenades to cover their advance up the centre. 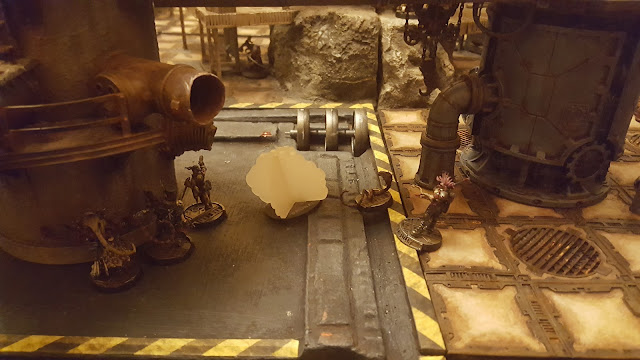 Despite the Inquisitor taking advantage of the Dolls' reckless advance by hugging the cover afforded by the sump swamp.... 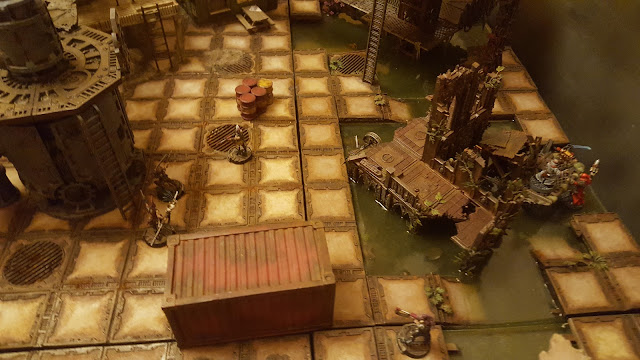 ....the Kindred's Hybrid Acolyte blasted chunks from Sergeant Bronn's Ablative Armour with his plasma gun, pinning the trooper. As the Voodoo Dolls moved up to offer support Tia was gunned down and taken out of action by a hidden Neophyte. 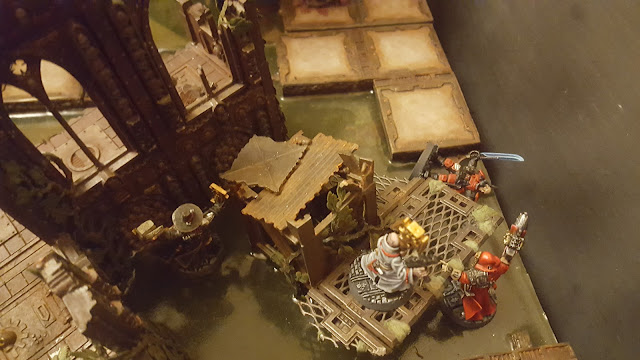 The Voodoo Dolls' Ambot, Ju-Ju, climbed up the rocks in a bid to close the distance with the other Hybrid Acolyte 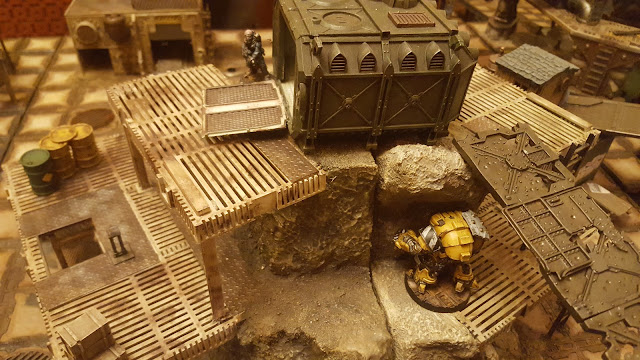 .
The Kindred's Cult Adept lay down covering fire with his Long-las. 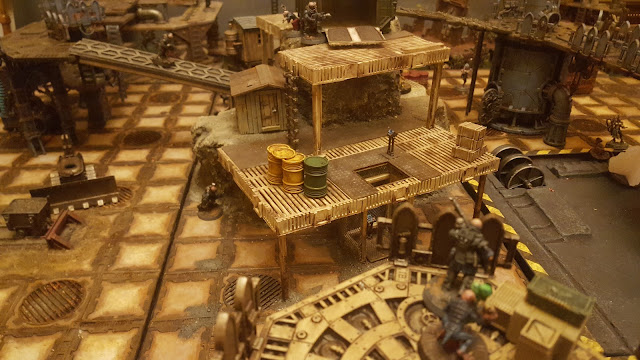 Cinders rushed forward eager to christen her new hand flamer. The Juve was obviously still learning how to get the best from her weapon and used all of her fuel dousing down a rapidly approaching Aberrant. Worse still she failed to wound the beast or set him ablaze. Fortunately her leader was on hand to help out. Brigitte followed up and and took him out with bolter round to the head. 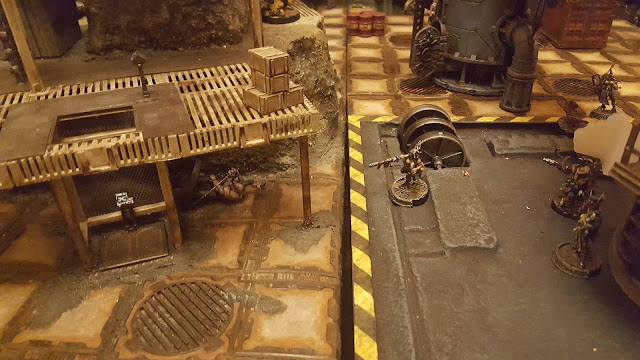 The Dolls' Rogue Doc threw a Smoke grenade to cover Cinders' earlier impetuousness but an eagle-eyed Neophyte pinned her with his Autogun, leaving the young Juve bleeding out. 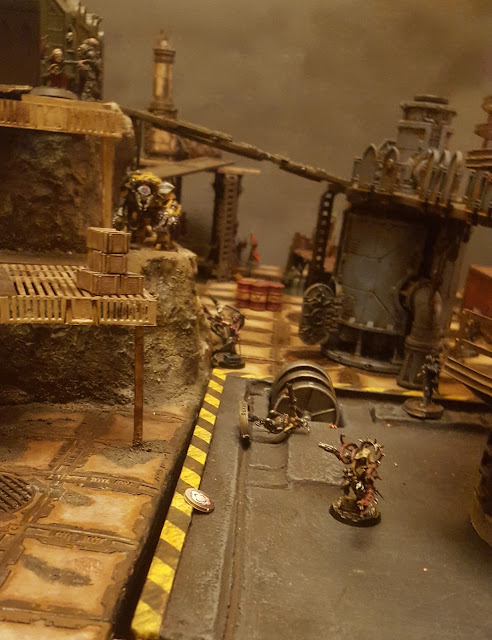 The Hybrid acolyte in the centre bathed Ju-Ju in flames, stripping a wound from the juggernaut and pinning it. 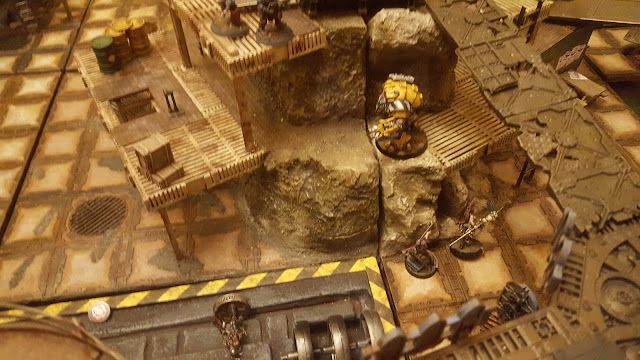 Dragosani and his entourage sprinted from cover to cover but Jared Blaine proved too slow and was pinned in the swamp. 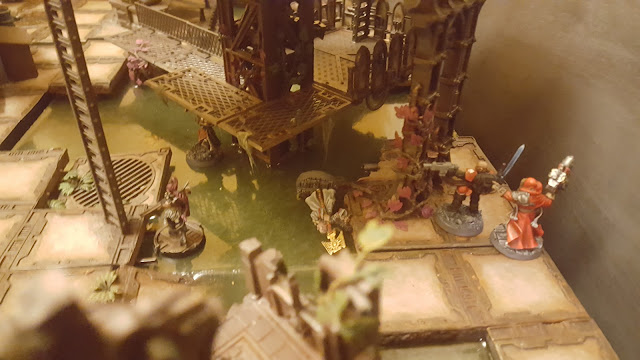 As the Dolls moved up to cover the Inquisitor's advance the Kindred's Acolyte seriously injured Jinx. More shots rang out from the Kindred and Calypso was taken out by a neophyte totting a Hotshot Lasgun. 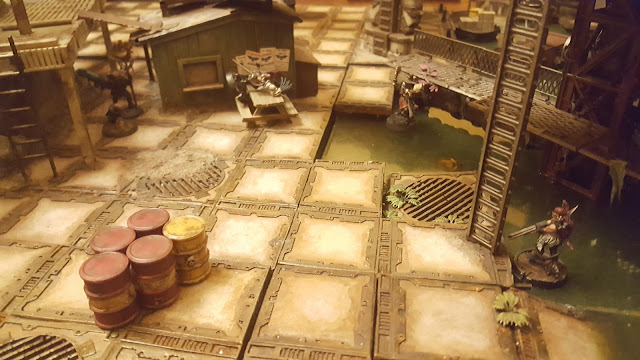 Kimmy targeted the Hybrid Acolyte that had slowed the Inquisitor's advance and left Jinx in such a precarious position. As she pulled the trigger her grin was replaced with a scowl as the Acolyte's freaky little pet dragged him clear at the last second. 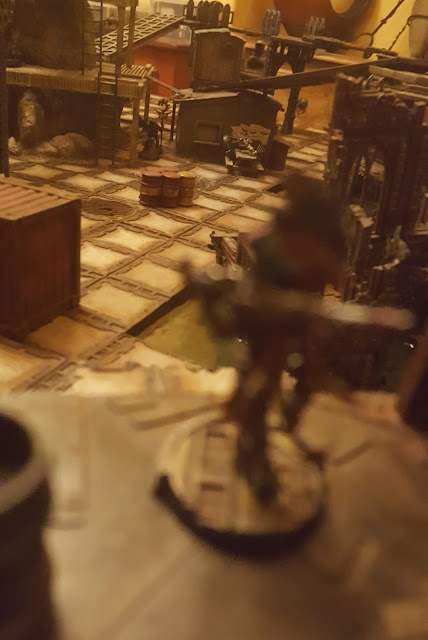 Ju-Ju charged the other Hybrid Acolyte inflicting 6 serious injuries on his foe and taking him out of action. 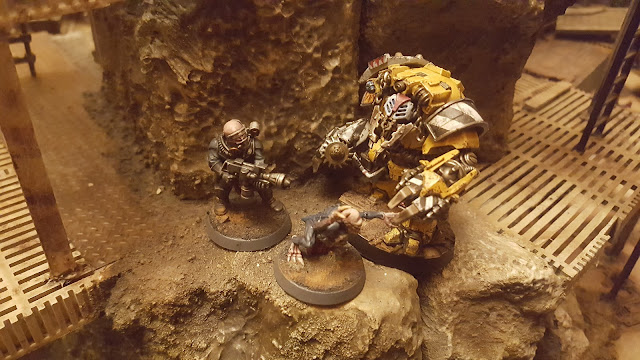 An Aberrant charged Sergeant Bronn has he waded through the swamp. The beast swung wildly and the trooper showed why he was an integral part of the Inquisitor's retinue as he deftly ducked, weaved and parried the blows. 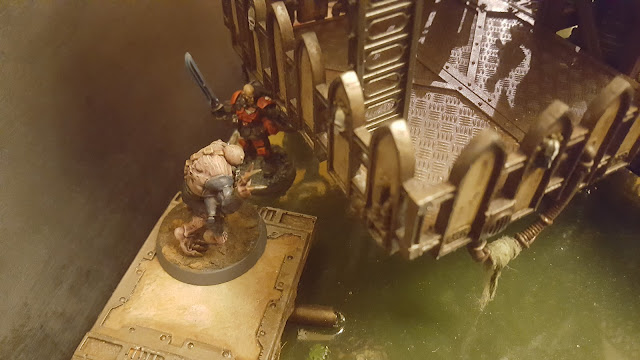 Sabine moved to the edge of the swamp and blasted at the plasma totting Hybrid Acolyte but once again the Hybrid's familiar warned him of the danger. Luckily for Sabine Maman Brigitte had moved across to support her. The Escher Leader charged in and finally took out the troublesome Acolyte with her stiletto sword. 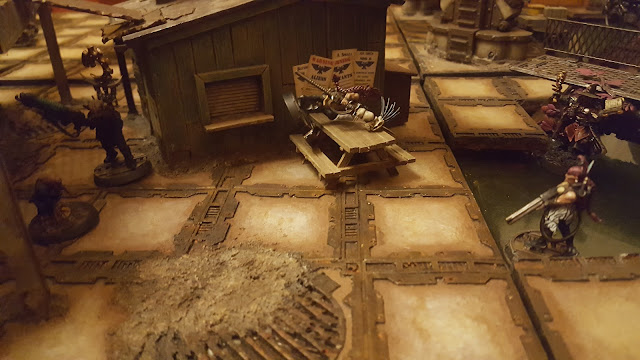 Preacher moved around the drinking hole and raised his Ministorum Icon, channelling his righteous fury through the device (counts as a Neural Flayer). All three screamed in blind panic as divine light temporarily robbed them of their sight. 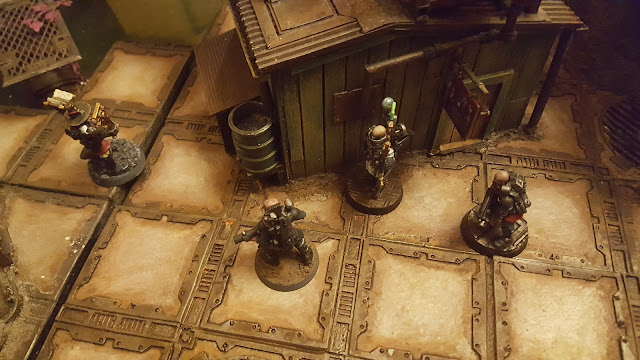 Dragosani charged the Aberrant locked in combat with his sergeant and plunged his stiletto blade into the abomination, taking it out of action with the typical efficiency one expects from the Inquisition. 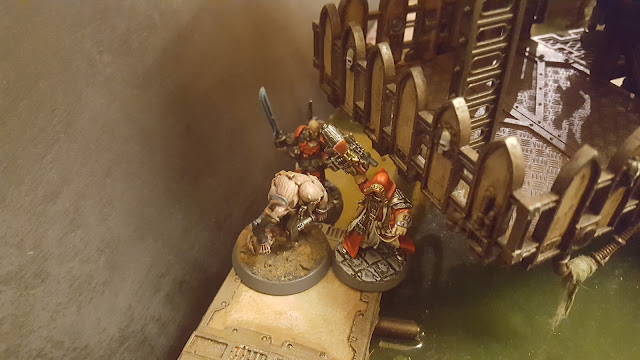 A Kindred Neophyte seriously injured Preacher with his Hotshot Lasgun but Jared Blaine charged in before the rest of the Kindred could take advantage of the situation. The Inquisitorial agent could only inflict a flesh wound on the Neophyte but thought he had bought valuable time for his comrade to drag himself away from the immediate danger. Blaine had underestimated the Kindred's fanaticism though and a Neophyte gunned him down from a distance even though he was in combat. 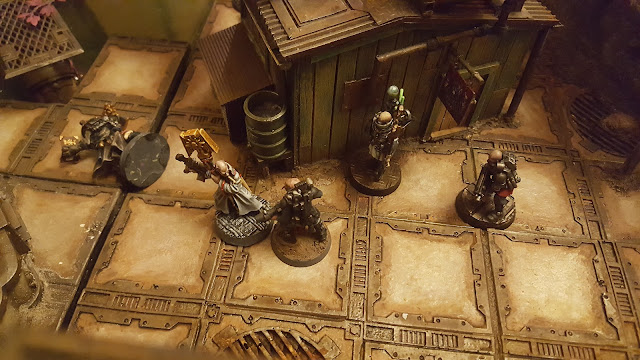 The Cult Adept continued to suppress the Ambot, once again pinning it in place and then taking out the Voodoo Dolls' Rogue Doc with his fast shot ability. 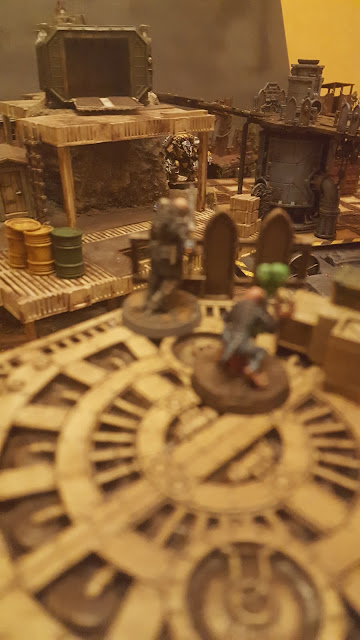 The Kindred's Rogue Doc ran for cover as the Inquisitor lay down an impressive amount of fire with his Rak'Gol razor gun. 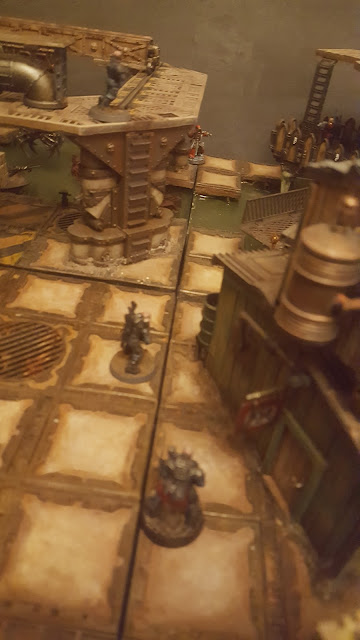 As the Kindred dived for cover, Brigitte and the rest of the Dolls closed in to take out what little resistance remained. 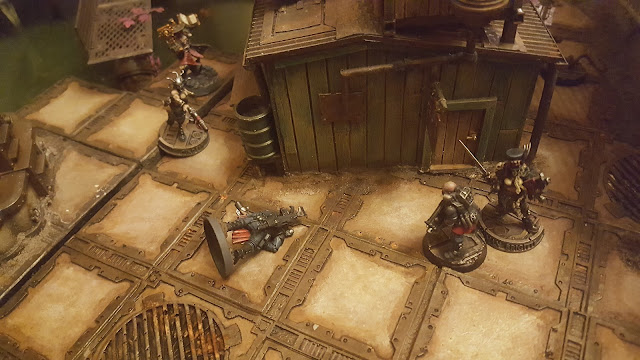 The Cult Adept signalled for the Kindred to retreat and with a sigh of the relief Fellon Black fled with the rest of his remaining crew. The Doc would be busy for the rest of the cycle as he tended to the wounded but at least four of the intruders would be out of action for a while.


"I prefer it when you're injured" said Sully as she tended Blaine's injuries. "It doesn't feel like my brain is trying to push my eyes out of my skull when you're like this."
Jared offered a weak smile. "It's a rare gift, you know?"
"It doesn't much feel like a gift" she replied as she finished stitching up his wound.
"Focus on the pain when it comes. If you concentrate on the pain you'll be able to track it to its source...I know it isn't pleasant but it could save your life one day." he whispered.
"Is there anything you don't think you know about?" she taunted.
Blaine's smile widened, "It's what I do. As well as use my gifts to influence people, I'm a Spotter. Wyrds, Witches, Psykers I feel them all."
"Are you calling me a witch?"
Blaine chuckled "No, you're not a witch, you're something else. You're a Sensitive."
Sully raised an inquisitive eyebrow.
"Psychic emanations affect you but you don't even register on my radar, so I suspect that your ability is benign. I doubt that your abilities can be honed, even with the most arduous of training and guidance." He continued.
"I get all the training I need from my sisters and the Hive Spirits' guidance has never let me down!" said Sully as she stood up to tend to the rest of the wounded.
Blaine flashed her a smile once more before closing his eyes to rest.....