Greetings Sump-Dwellers!
Rob and I have been engrossed in our games of 'Munda for quite a while now and we're both enjoying the history and narrative that our Perpetual campaign is unearthing. Rob's Genestealer Cult is rapidly becoming the terror of Rockridge, but every game is proving to be a tense affair with neither of us sure of who will come out on top until the very end...which is everything you can ask for in my book 😃
However, not all is well in our corner of the Underhive and our Perpetual Campaign is throwing up one or two problems......

The whole reason for embarking on our Perpetual Campaign was because we wanted to build and paint our gangs and move on to the next gang. This worked great for a while but it soon became apparent that it was a serious effort to keep up with the mechanics of the game and that it was holding us back from moving on to other gangs/monsters/projects.
Injuries have eventually gotten the better of us. My Voodoo Dolls have taken so many eye injuries that the girls have appealed to House Escher for Guide Dogs and Rob's GSC gang moves slower than a one-legged Dwarf! We could live with this, it was fun even though it kept slowing the game down as we checked out our stat lines (we need a to keep the games reasonably quick to fit in our KFC, cup of tea and beer).
The main issue was the upgrades and experience creep. We had some gangers that could shoot the leg off of a tick and as the games progressed we both felt that the game was losing its way. I mean if everyone can shoot like a Van Saar with a Telescopic sight and Fast Shot, then what's the point?
We both enjoy the the fact that a ganger isn't the greatest fighter in the world and yet it can be that very same average ganger that can win the game for you by clubbing their opponent off of a gantry with the butt of their gun to take the spoils. Unfortunately, as the campaign progressed that became more and more of a rarity.....I mean we both still refer to my Escher ganger Sabine as the hero of Rockridge for the the time she took down the Sump Monster when it looked like both the Voodoo Dolls and the Clean-up Crew were about to be dragged beneath the Sumpwaters and eaten!

So to rectify the issues that Perpetual Campaigns can bring up, we've decided to reset the clock and simplify the game mechanics.
The main changes we've made is take a lot of the book-keeping out and allow us to just get on with our story. I suspect that we're moving into Inquisimunda territory (although I'm not sure what the true definition of Inquisimunda is). We both love the Necromunda rules but we know that a game that contains so many variables is pretty much impossible to impose any semblance of balance (want an Escher gang that shoots like Van Saar? Just equip every ganger with a Master Crafted Lasgun for 10 credits!) but fortunately for me, Rob has exactly the same attitude to the game as I do, so we're pretty much going to do whatever we want to do with our gangs.
Of course we have a few ground rules to make sure we're on the same page.

So that's where we're at right now.
I've been busy updating the Voodoo Dolls for our Reset and the girls are ready to reclaim their lost territory and make Rockridge their own.

The Gang hasn't changed too much. My Ambot Ju-Ju is still in there but Kimmy (Kimaris) has had a change of wargear. Her Heavy Stubber has proven to be a worthy addition to the gang's arsenal but it needs a suspensor (60creds) and it doesn't really fit with the Dolls' background of hidden quiet Sump Swamp Dwellers. Of course this has meant a new model and I took the opportunity to kill two birds with one stone.
I've had the Forge World model Kria the Huntress for quite a while. I love the Forge World models for Necromunda but I'm not so keen on the Bounty Hunter rules (mainly because I want to use them in every game and not just as accessories for the odd game). So I decided to use her as Kimmy's new weapon load out (Long-Las, Autopistol and Stiletto Knife). I want to say that she was a joy to paint, but honestly I struggled with the fine detail and I've come to the conclusion that my eyes just ain't what they used to be 😞 (I was taking photos on my mobile and enlarging them just so I could see her face. Then I'd go back and use the enlarged image to try and alter her face....getting old sucks!) 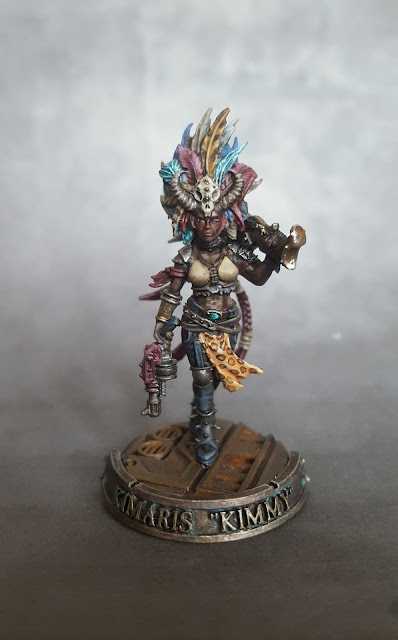 With the credits saved from Kimmy's new load out I finally had enough to give Cinders the weapon that she used to have 20+ years ago...a hand Flamer 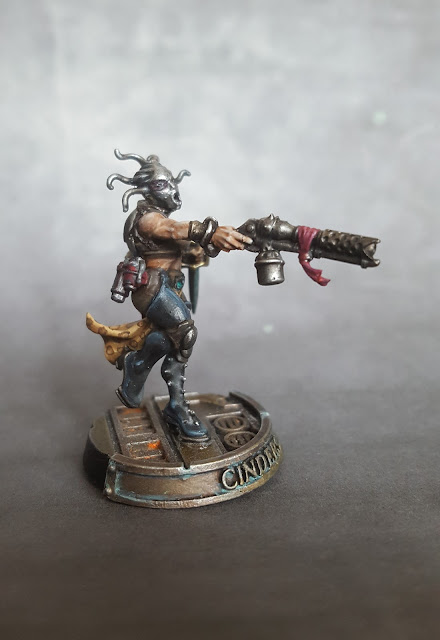 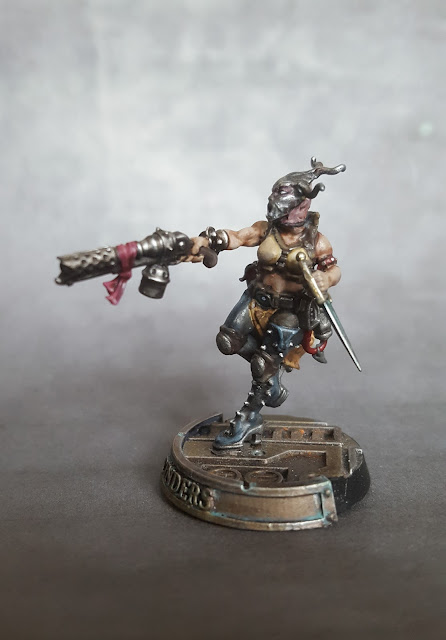 Out of all the gangers (both standard and converted) my favourite is Sumpsnake Sully. Just about every story that I've posted about the Dolls has either involved her, been from her perspective or has intimated that she is in a transitional phase of her development, so I wanted to add to her ongoing story.
I had a word with Rob about giving her a pet (See rule 10) and we discussed what points it should cost (then I added +10 creds just to be sure). I used the rules for the Cyberachnid from the Van saar pets but lowered its movement to 5" and removed the Web Projector. so it's basically a 1 wound Stiletto Blade with 1 attack that gives her Fearsome.
Of course being named Sumpsnake Sully kind of dictates that her pet wouldn't be a spider.....

I had to resist calling him Nagini and instead went for the voodoo name Ezili (Erzulie in the old tongue).

So that's the Voodoo Dolls complete....at least until the rule of cool casts her gaze over them once more.

Until next time.....may the Hive Spirits watch over you 😉