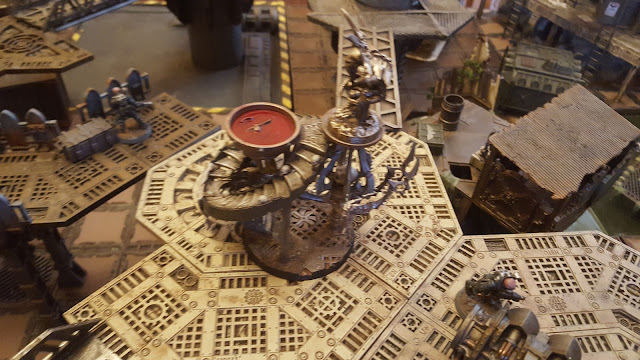 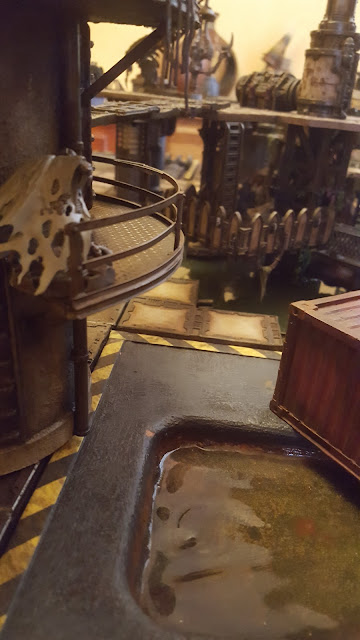 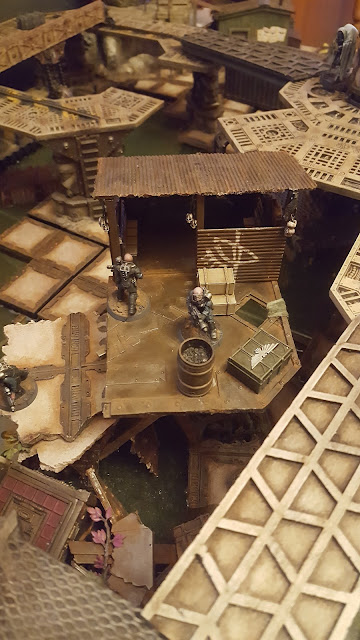 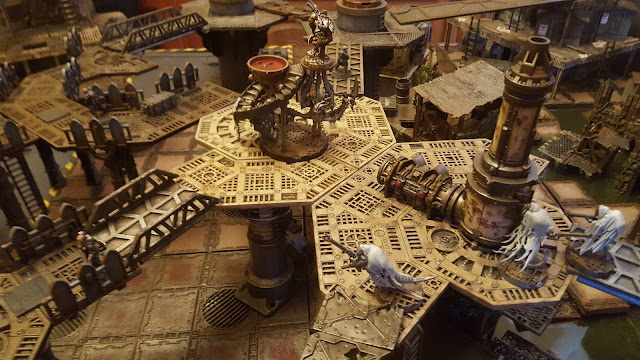 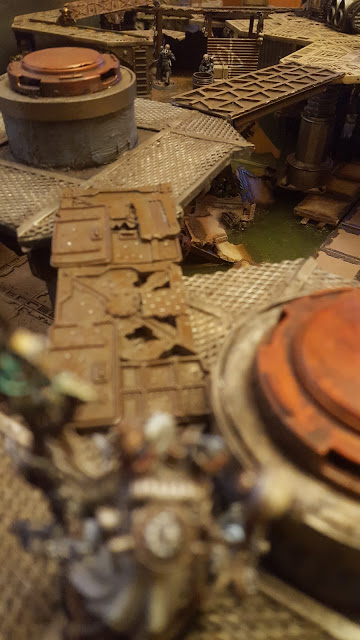 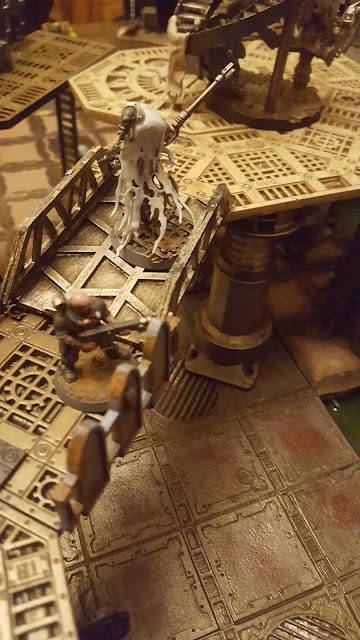 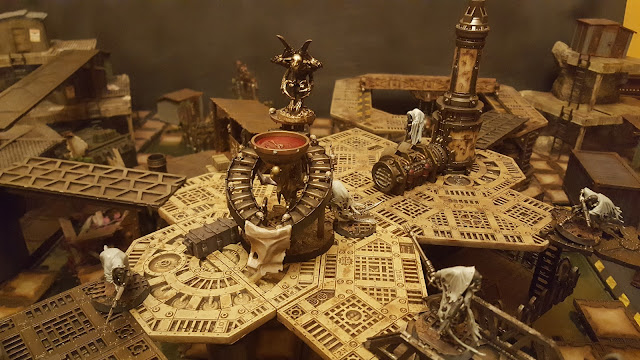 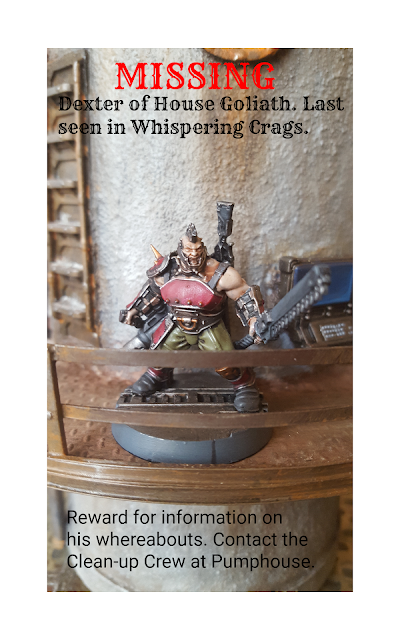 The Clean-up Crew mess up their attempt to sweep away the Voodoo Dolls. 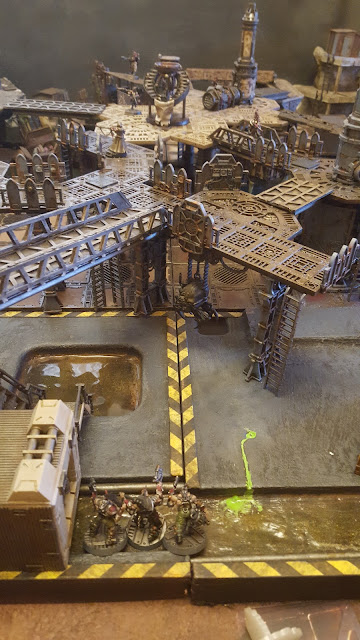 The cycle of intolerance continued when the Clean-up Crew of House Goliath attempted to defile the Voodoo Dolls' relic in Rusted Bluff.
A much reduced Goliath gang confronted the Escher gang in an attempt to claim the territory and belittle the Voodoo dolls. 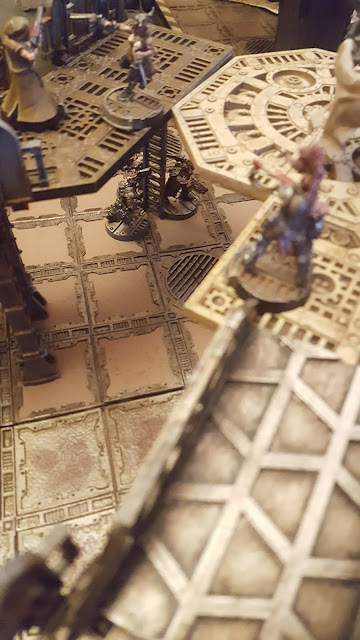 The Goliaths unusual use of stealth to sneak up on the Dolls' position and catch them unawares took the Escher gang by surprise.

And was carefully coordinated to coincide with the Sump Slug migration that was plaguing the territory. 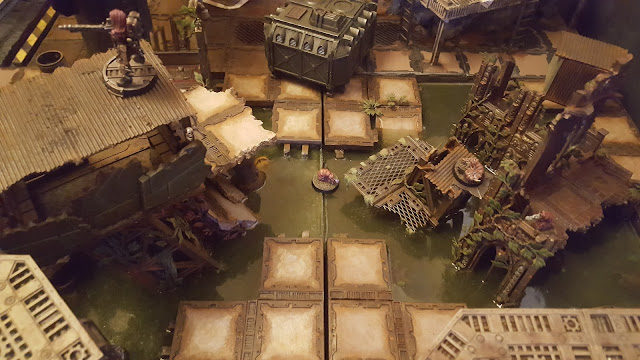 The Clean-up Crew  closed in on the Escher Relic, blindsiding the Dolls' sentries. 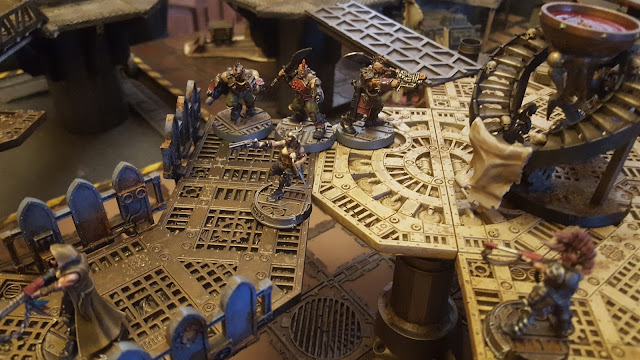 The Escher gang proved far more resilient than the Clean-up Crew bargained for and after a brief skirmish the Goliaths fled, leaving the Voodoo Dolls firmly in control of Rusted Bluff and its Promethium Cache. 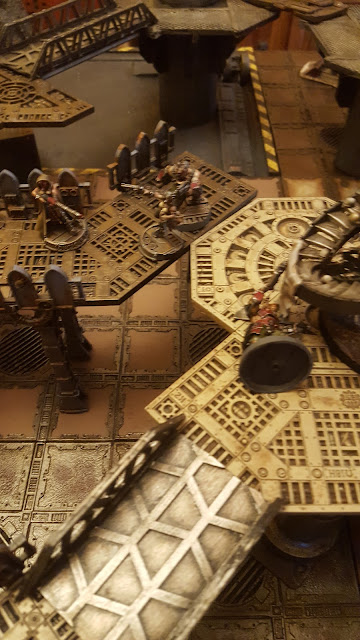 As the Cycle of Prejudice came to a close, two more territories have been claimed in Rockridge's expansion.
The Marionettes now control Whispering Crags, Greyspore Choke and the settlement of Cruelwater and have a healthy Reputation of 6.

The Voodoo Dolls have claimed Rusted Bluff, Tumbledown Rise and the Settlement of Stranglevine Creek. Their Reputation of 3 belies their success but at the time of going to press the Voodoo Dolls' wealth is unsurpassed.

The Kindred of the Dawn Shadow are quickly discovering how hard life can be in the Undrehive and they have still to gain any influence outside of their settlement of Grubbers' Heights. They're slowly gaining reputation though (2) and their physical stamina from working in the mines has proven its worth as the gang is still at full strength.

The Clean-up Crew have taken a beating. Not only have two gangers been killed but sources close to the gang have expressed growing concern about the whereabouts of their champion Dexter. The gang's reputation has taken a turn for the worse (1)and they have retreated to their settlement of Pumphouse. 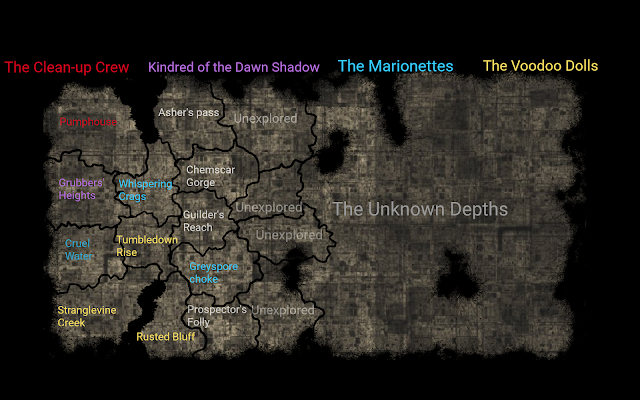 Authorities are at a loss to explain what brought about the Cycle of Prejudice but the Herald has learned that an up and coming preacher by the name of Abel Cankerson has been spreading the word of the Emperor throughout Rockridge lately. A representative of House Cawdor has denied that there is any connection between his sermons and the recent religious intolerance stating that "Abel Cankerson is a humble and pious servant of the Emperor who only promotes the word of Him on Earth."
His populist views appear to have taken root with some of Rockridge's inhabitants as his following has grown significantly. 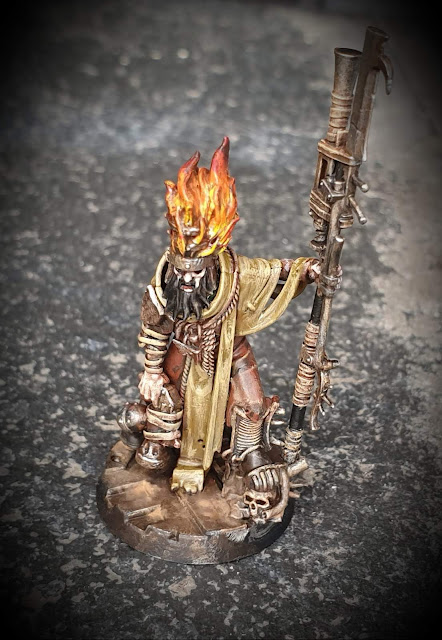 Rest assured the Herald will continue to keep our readers up to date with any further developments.