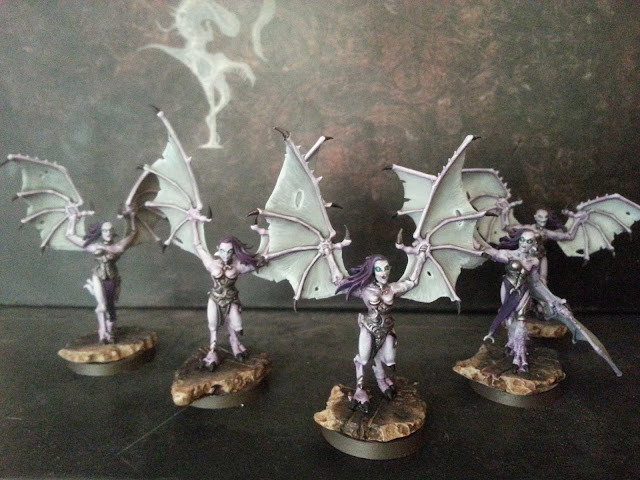 Once again the dreaded HBS has gripped me with its alluring and seductive charms. As I write this, I'm surrounded by 20 Slaanesh Furies, a Soul Grinder, the Masque, a Slaanesh Herald, 10 Daemonettes, a Brass Scorpion and 3 Kataphron Battle Servitors waiting impatiently to be turned into Rapier Weapons Carriers.

Progress has been slow on the Slaanesh Furies, not because I've lost interest in them but because my mates (known as the Cold Steel Mercenaries in gaming circles) are whisking me away to the Eternal City for my birthday. So rather than painting, I've been sorting stuff out for my adventure in Rome.....otherwise known as 'five go mad on Asti Spumante!'

Whilst all this has been going on I've been giving serious thought on what to take to the UKGT. I thought I had a list nailed down.

It had good synergy, but I was still concerned about the prolific fire power of the Eldar and the armour of Imperial Knights.
To confirm my suspicions, three of the Cold Steel Mercenaries are at tournaments this weekend. Michael is using a very resilient Necron army and has had mixed results. He feels that he's up against it in every game and my thinking is that if Necrons are struggling then Chaos Space Marines will really struggle. I've seen a lot of Eldar at the event (not surprising really) as well as Knights.
My Brother in Sin, Steve, is playing at a different event and is using his Emperors Children. He's been keeping me updated between games and unfortunately, his conclusion is that he's brought a knife to a gun fight.
After giving it some more thought I'm now looking at the following:

It's very small, but I feel that the majority of it has good durability that covers a lot of the bases. The beauty of this list is that it will play quickly (which is always good when playing 6 games) and will save my back from bending over a table moving an extra 66 models ;-)
My mate Alex is coming up tomorrow and we'll have a game before heading off to the airport. One thing's for certain, I need to decide which way to go because my coffee table is straining under the weight of all these unfinished models littered across it.
Right, I'm off to learn "Can I have 5 beers please?" in Italian. Until next time .....may Our Lady grant you her number ;-)
Posted by Castigator at 05:38