Getting Back In The Saddle 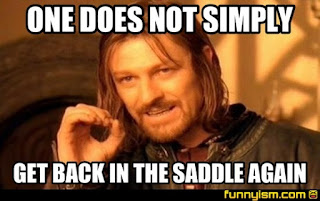 As I mentioned previously I've entered a heat at this year's UKGT. As everybody knows, the Chaos Space Marine Codex is currently the weakest Codex out there at the moment and my usual Castigators army list is woefully inadequate to compete at this level. With this in mind I'm looking to allies to pick up the slack and help out the Castigators in their time of need. Fortunately for me, I have a couple of months to decide on which direction to go in. Most of my time will be spent on speed painting Daemons, trying out some lists and discovering just how inadequate my rules knowledge is.......

Having played a couple of games against my mate Neil, it didn't take long to discover that Nestor and his Bikers just weren't up to the task of taking on the more competitive armies out there. My Lord and his bikers cost 450+ points and whilst they're great at picking on vehicles or shooty units, they soon get stalled or are ineffective against dedicated assault units. Add to this the abundance of strength 6 shooting that is out there right now and their toughness isn't what it used to be.
So Nestor and the 1st Cohort will continue with their Storms of Judgement campaign, whilst Lucian and his 2nd Cohort will venture into the perilous world of WAAC.

(Not So) Great Expectations
I'm expecting to see a lot of Eldar, Necrons, Space Marines and flying Nids at the GT, although my knowledge of tournament lists isn't what it was, these have traditionally always been prevalent. Unfortunately for me, I don't own any of these dexes so my knowledge of them is lacking.
What I do know is that Eldar can make short work of Chaos Marines and that their abundance of D weapons will make a mockery of my armour. Similarly, Imperial Marines have plenty of Grav guns that do pretty much the same thing. Necrons have the Decurion thing going for them which I believe gives them incredible staying power and they care little about armour of any sort. So all told, none of this is particularly great for the humble Chaos Space Marine.

The germ of an idea
So with this in mind I'm looking to minimise my weaknesses (Chaos Space Marines) and make it as difficult as possible for Grav guns, D weapons and Necrons.
The easiest way to negate the Grav gun effect is to give them soft squishy targets. Grav guns are next to useless against Daemons (6 to wound) and are more than capable of tearing apart a unit using them in close combat. My theory hammering on Necrons is that the best way to beat them is negate they're reanimation protocol by breaking them in combat and wiping the whole unit out in a devastating charge. Again, Slaanesh Daemons are more than capable of doing this (I hope).
Eldar are the problem, their rate of fire is second to none and their speed is frighteningly quick. Fortunately there are a couple of things that Eldar Jetbikes don't like, one of them being the Heldrake and another being caught in close combat. Slaanesh Daemons are pretty damn quick and while they might not be as fast a Jetbikes they can soon cover the ground to limit their avenues of escape.
For flying Nids, I had an idea to take the Masque in a Rhino (borrowed from my Noise Marines) and make it invisible. The idea was for her to pop up out of the hatch and shake her booty at the flying Tyrant forcing it to land next turn or to do the same to Thunderwolves.

Putting it all together
These are the thoughts (and many more besides) whilst designing my 1500pt list. I tried the following against my mate Neil and his Iron Hands/Grey Knights on Saturday night.

Neil was trying out the new Marine dex. He brought along 3 Librarians (level 2), Chapter Master on a bike with command squad including an Apothacary. Basically, this little lot had a 2+/3++ save (Chapter Master) a couple of Grav guns and thanks to his Warlord Trait a 2+ Feel No Pain that were all invisible....Ouch! To accompany this wonderful Deathstar were 5 scouts, 2 Dreadknights, Strike squad, level 3 Libby.

Despite my plan being seriously flawed, it worked out reasonably well. Neil put all his firepower into a unit of Daemonettes knocking them down from 18 to 7 models. Worse was to follow when he cast dominate on the Furies (being leadership 2 meant that they never moved all game!) I sent my Sorceror and Spawn to tie up the Dreadknights (for some reason I thought Dreadknights were strength 8 and not strength 10....oops). Fortunately for me one Spawn survived and a unit of Daemonettes made a 9" charge to get into combat with them. The Masque arrived and deepstruck next to the deathstar to restrict their movement for a turn. The Cultists sprinted for Neil's table edge in an attempt to draw Neil's Deathstar away from my Furies. The Fire Raptor and Heldrake did sterling work wiping out the Scouts, Strike squad and Libby. Neil's Deathstar killed the Masque to free themselves from her dance, but the delay proved costly for him and it took another two turns to wipe out both Cultist units leaving him well out of position to claim any objectives. The Dreadknights finished off the Daemonettes but the girls had reduced them to 3 wounds between them which the Raptor and Rapiers made short work of. At the end of the game the Fire Raptor and Rapiers claimed 2 objectives to Neil's 0.

The battle gave both of us plenty to think about. The Sorceror once again proved to be a disappointment. A level 3 Sorceror is never going to achieve anything when your opponent has 14 psychic dice to my 3. I think it's a case of go big or go home with Psychic powers. I'm still going to use him (he's the cheapest HQ available) but I'll drop him down to level 1 and use the points elsewhere.
I'm really pleased with the Daemons. All of Neil's fire power killed 11 Daemonettes in one turn, which is only 99pts and no great loss in the scheme of things. The other squad of Daemonettes really messed up Neil's game plan and even the Furies helped keep Neil's Deathstar out of position.
The Masque proved useful too, but she's a suicide HQ that drops in and stops one unit for one turn and then dies. In this game, that proved to be enough but I'm not sure about her.
The Furies leadership proved to be disastrous and I'm thinking of dropping the Masque and replacing her with a Herald with Beguilement and Steed. This will up their leadership to 8 and make them a nasty unit on the charge (40 rending attacks re-rolling to hit is going to hurt).
The Heldrake killed much more than the Fire Raptor but the Fire Raptor killed off targets that the Heldrake struggled with (Terminator Libby and Dreadknight) so I think they work well together.
The Rapiers didn't achieve a great deal, but Neil had no armour in his list and they did manage to finish off a Dreadknight and claim an objective.
The Spawn did nothing but die, but that was my fault for charging them into something that could instant death them (I really need to brush up on my Codex knowledge).
Overall, I'm happy with the synergy of the list, it packs quite a lot in for a 1500pt list and whilst it's always going to be an uphill battle I think it should give me a fighting chance to win some games.

In other news I've nailed down the colour scheme on my Furies. I've gone with a dark purple to add some contrast to them. At 20 strong they're quick and dirty but I think they'll look striking enough on the battlefield......until next time.....may Our Lady grant you her number ;-) 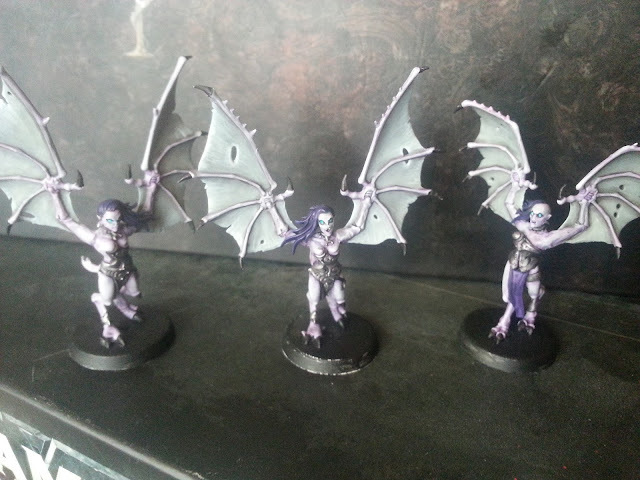