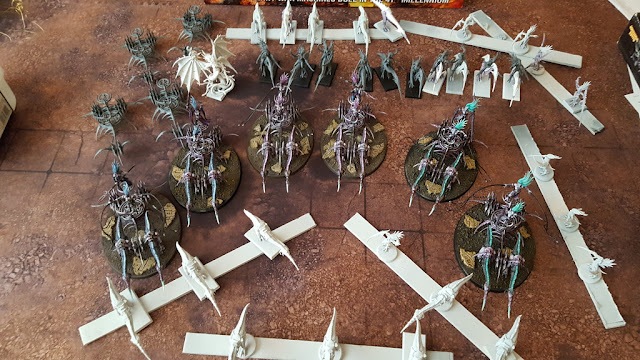 
......It was all going so well until I ran out of white paint, since then I've been struggling to focus on them.
While waiting for the paint to arrive, I've managed to get everything built and most of the models are now undercoated.
Initially, I gave myself a month to get these painted. This was because The Champions of Chaos event was in a months time and I had every intention of throwing a sickie from work and crushing all of those old pretenders who had the temerity to question my divine right as Champion of Chaos! Unfortunately the event has been postponed, but at least it gives me an extra month to get these finished before my next planned event. This, coupled with work has meant I've done very little this week.....but I have done some painting....

The Harvesters of Torment 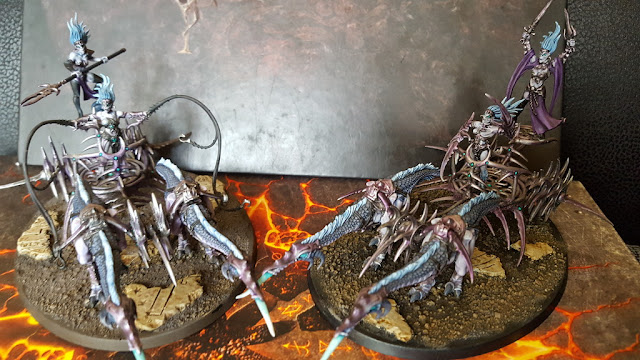 The Harvesters of Sorrow 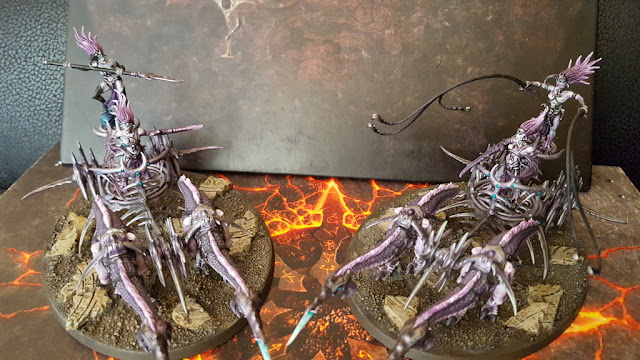 The Harvesters of Pain 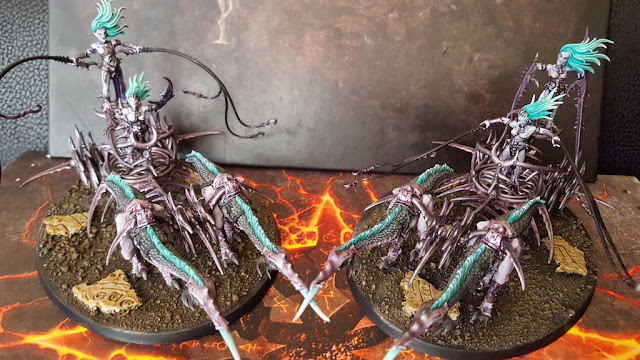 I've thought long and hard about how I'm going to transport these to events, the models are very flimsy and with the Daemonette on the dais they are 4" in height. To overcome this I've magnetised the girls at the back. This reduces their height to 3", making them more durable and easier to transport. 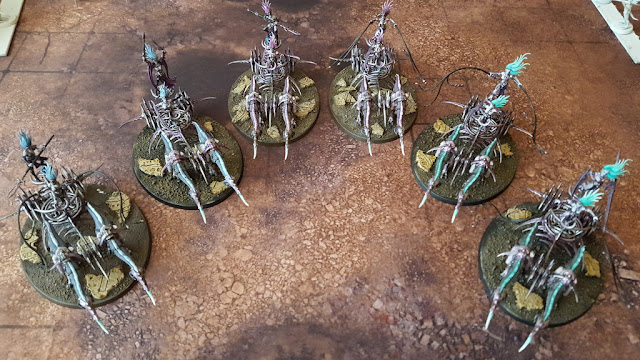 As you can see from the picture above, 6 take up quite a bit of room, so 10 will be a challenge to transport. I've had a look around for foam suppliers and I think I'm going to have to bite the bullet and order some from Battlefoam. Battlefoam do a pick n pluck foam 3" sheet that will fit the GW Crusade case. I've worked out that two of these will hold 12 Chariots comfortably, it will probably cost me around £50 (why is foam so expensive?) but I think it's the only way I can be sure of them being in one piece when I get to an event. If anybody knows another supplier of foam, I'd appreciate a heads up.
As if transporting these wasn't enough to think about, GW released some new scenic bases and on one of these new bases was a Seeker of Slaanesh. 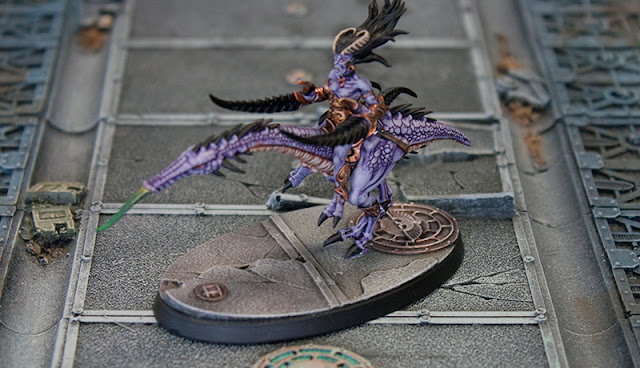 That is one big base for a Seeker!
I'm of the firm opinion that larger bases have more advantages than disadvantages (just look at how much more effective Flesh Hounds are on their 50mm bases than their older bases). These bases are 75 x 46mm compared to the cavalry base that is 70 x 25mm, so they're considerably bigger. When I first saw these I thought they were too big, but now that I've got used to them, I'm thinking that they'll protect the model much better when they're being transported and they do look rather nice. Everything seems to be getting larger bases, so it seems daft not to use these, especially as I haven't based mine yet.
I'd been interested to hear people's thoughts on these?

So that's where I'm at for now. Rob is luxuriating around a pool in Greece at the moment, so we haven't played recently, hopefully we'll get together for a game in a couple of weeks, but until then it's back to the grind, painting these chariots.....until next time, may Our Lady grant you her number!
Posted by Castigator at 11:25