Storms of Judgement - The Scourge of Voidspan 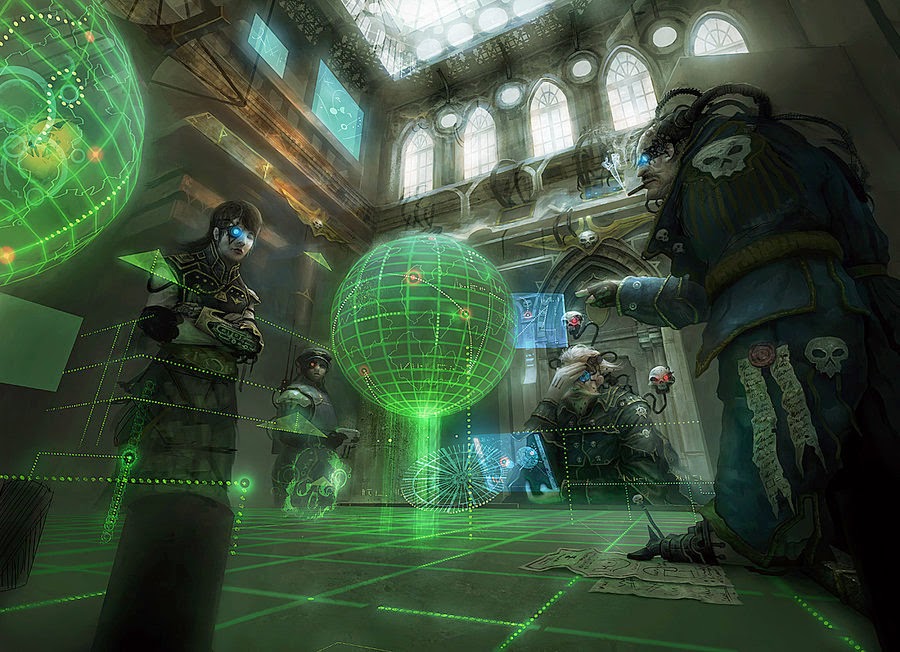 “You’re sure this scourge cannot be stopped?”
“Not from here, my Lord” replied Janus. “However, I’ve located the source and believe that the parameters can be changed to a more favourable setting.” continued the Warpsmith.
“Parameters?” Inquired Nestor.
“The Scourge operates under predefined protocols when targeting intruders. The Death Guard have locked the internal sensors to emit a wide angled beam that attacks the targets molecular structure. If we reach the coordinates that I am currently uploading to all squads, we can reset the protocol to emit a narrow angled beam. This would allow a quick-witted enough target to avoid the Scourge.”
“How long before the Scourge activates?
“Less than four cycles, my Lord.” Replied Janus.
Nestor opened a comm-link “All units, converge on me. We move out immediately.”

Objective
Both sides are attempting to take control of the Scourge and deactivate it. Unfortunately for the invaders, Defence Servitors stalk the corridors attacking any intruders.
At the end of the game the player who has secured the Scourge interface wins the game. The winner can choose who goes first in the next scenario.
Game Length
The game lasts for seven turns.
Special rules
Combat Servitors
9 combat servitors stalk the corridors.
2 with Heavy Bolters and Powerfist.
2 with Multi-Melta and Powerfist.
2 with Heavy Flamer and Powerfist.
2 with 2 Powerfists.
1 Overseer Servitor with Flamer, Meltagun and powerfist.
9 Blips are placed that move randomly each turn. A blip is only revealed once a target enters the blips line of sight.

The Scourge
The Scourge is activated at the start of the 4th turn. All models must take a toughness test or initiative test at the beginning of every turn. Whichever side is in contact with the interface at the end of each turn may choose which test is taken. The Death Guard won the last game and the Scourge begins the game set as a toughness test.
Armies
Death Guard
Lord Festus Blightmaster, MoN, powerfist, Burning Brand of Skalathrax & Sigil of Corruption.
5 Plague Marines, 2 Flamers. Maladourous with power Axe.
5 Plague Marines, 2 Melta, Tosis Mire with Power Axe.
5 Plague Marines, 2 Plasma, Septicus with Power Axe.
5 Nurgle Possessed.
4 Nurgle Spawn.
1 Obliterator, MoN.
The Castigators
Lord Nestor Lustheart, MoS, Steed of Slaanesh, Lightning Claw, Burning Brand of Skalathrax. Sigil of Corruption.
Squad Sublime – 5 Noise Marines, Blastmaster, 3 Sonic Blasters, Nephran Lustviper with bolt pistol and CCW.
Squad Rapture – 5 Noise Marines, 4 with Boltgun, Boltpistol & CCW. Darius Lewdgrip with Lightning Claw & Doomsiren.
Shaithis – Helbrute, missile launcher, fist.
N’kari – Keeper of Secrets
The Soulreavers – 16 Daemonettes
The Soulhunters – 3 Fiends of Slaanesh
Deployment
Both armies set up in their designated deployment zones, The Death Guard held their Spawn in reserve and the Castigators kept back a Helbrute.

Turn 1
The Blips set off on their patrol, the majority of them headed for the Death Guard in the Northeast sector. Two of the 'Blips' opened the door to the Death Guard's deployment zone, revealing themselves to be two Multi Melta Servitors. Both of them passed their awareness test (Initiative test) and opened fire on Festus, putting two wounds on him.

The Servitors charged into Festus and his Possessed, shrugging off any blows and tearing 2 of the Nurgle Possessed apart. Another 'Blip' revealed itself as a Flamer Servitor in the North west sector to the Plague Marines. Unable to target them it opted to run towards them.

Meanwhile in the Southeast Sector another 'Blip' revealed itself to the Castigators as a Heavy Bolter Servitor, who opened up on Nestor and put a wound on him.

The Servitor then attempted to charge but it was torn apart by the Noise Marine's  Doomsiren.
A squad of Plague Marines moved towards the Flamer Servitor supported by the Obliterator and gunned it down. The other Plague Marines charged into the combat with the Servitors attacking their lord and tore both of them  apart.

The Castigators made their move with the Fiends racing along the corridor supported by the Keeper of Secrets and the Daemonettes. Opening the door revealed a flamer servitor who immediately activated, hosing them with fire and  wounding a Fiend.

Nestor and two squads of Noise Marines moved up unopposed in the southwest.

The Fiends and Daemonettes ran past the Servitor leaving the Keeper of Secrets to tear apart the Servitor, whilst Nestor and his Noise Marines sprinted for the other entrance to the control room.

Turn 2
Having killed 5 of the defence Servitors already, the remaining 'Blips milled around the control room waiting for any intruders to show themselves.

The Death Guard's Spawn arrived from reserve entering from the Northwest sector.and sprinted towards the Castigator's Lord.

The Plague Marines opened the blast doors to reveal a Heavy Bolter servitor who gunned him down with the aid of the Obilterator.....

.......While Festus and his possessed entourage tore the door down barring their way.

The Castigators redeployed their entire force to the west...... Nestor, realising he could be fighting on two fronts, left the door to the control room and moved towards the Nurgle spawn accompanied by a squad of Noise Marines.....

Nestor and his Noise Marines opened fire with their Burning Brand and Doomsiren, killing one and wounding another before charging in with the Fiends..... .......Nestor and the Fiends inflicted two wounds before the Spawn could strike, however this seemed to only enrage the abominations, driving them into a frenzy they hit back wounding Nestor and killing a Fiend (he rolled a 6 and got 18 attacks!). To add insult to injury the Fiends lost another to instability leaving one Fiend with one wound left....Pah!

......it charged in but the Daemonettes squealed in delight as they ripped the servitor apart.
Leading the way Festus urged his troops to converge on the control room.....

Festus charged the door smashing it apart with his powerfist.....

......The Overseer servitor reacted immediately and blasted the unit with his meltagun, Festus was the closest target, and been the slow fat-witted fool that he is, failed his look-out-sir roll and was vaporised!

The combat servitor also reacted and charged into the Possessed but neither side failed to wound each other.

The Spawn continued their assault taking two wounds before dragging a Noise Marine down. The Castigators moved into position to take the control room. the Daemonettes and keeper surrounded the door leaving just enough space for a blastmaster shot to blow the door. If the door could be blown I could assault the Overseer servitor and then consolidate onto the Scourge interface, just in time to change it's parameters.....

.....of course the problem with plans are that they often go awry. The Blastmaster hit but failed to penetrate, leaving the Castigators to the mercy of the Scourge. The Spawn combat rumbled on with the Castigators hacking one down for the loss of the Slaanesh Fiend.
Turn 4
The Scourge activated, targeting every model on the space station. Every model in a unit had to pass a toughness test or be destroyed. I started with the one that was the most precarious, the Daemonettes. 16 dice were rolled, needing to roll a 3 or less to pass (so fifty/fifty chances) and here is how many I passed..... ....yes, that's right, two Daemonettes remained as the other 14 were sent screaming back to the Warp! Rob lost a Plague Marine from Septicus' squad, a Possessed and 3 Plague Marines from Tosis Mire's squad skulking behind the Possessed. Two Noise Marines were vaporised to add to the tally.
The Overseer moved over to squad Septicus and fired his melta killing a Plague Marine......

......Charging in the Overseer killed another Plague Marine whilst taking a wound from Septicus' power axe....

The Possessed  tore apart the servitor in combat.

Squad Maladorius charged into the combat between the Noise Marines and the Spawn. The Plague Champion issued a challenge, which Darius readily accepted.....

Darius struck twice, lightning claws cutting through Maladorius' armour with ease. The Plague Champion felt no pain (as usual!) and smashed the Noise Champion to the ground. Power surged through Maladorius as Papa Nurgle gifted him with an additional wound. Nestor tore into the Spawn leaving both surviving monstrosities on one wound each. Tosis Mire's squad charged into the Overseer, but were unable to help out Septicus as the Overseer smashed him to the ground after challenging him.
The Daemonettes opened the blast doors and moved into contact with the Scourge interface as the Keeper of Secrets moved towards the possessed..... The Noise Marines covering them opened fire and wiped out the Possessed with their Blastmaster and Sonic Blasters....

Nestor issued a challenge to Malodorius, which the Plague Champion accepted. Nestor inflicted a wound but took one in return leaving both of them on one wound each.....

......The Noise Marines hacked apart both spawn as the Plague Marines reduced them to one model.

Turn 5
With the Castigators in control of the Scourge, the protocols were quickly altered. Tosis Mire and his surviving Plague Marine failed their initiative test and found themselves teleported out of combat with the Overseer into hard vacuum outside of the Space Station, they were joined by a Daemonette on the Scourge interface.... .......As well as two Noise Marines from the Blastmaster squad! The Overseer, pausing only to wound the Keeper of Secrets with his Melta, charged into the beguiling creature....... ......only to be ripped apart with obscene ease. The Nurgle Obliterator moved into the room peppering the Keeper of Secrets with his Assault Cannon, but the shells were turned aside by it's Daemonic Aura.

The combat between Malodorous and Nestor was short lived as the Slaaneshi Lord carved him apart with his lightning claws. The surviving Noise Marine battled on against the rest of the Plague Marines, dropping one and proving to too quick for the survivors.

The Obliterator charged the Keeper in an attempt to delay him but all he did was hasten his demise.

......Leaving the Castigators firmly in control of the prize.

Result: Castigators win.
Tosis activated his comm-link "all squads report".......Nothing but silence answered him. Turning his head he looked around. Two of his squad drifted past silently in the cold void that surrounded him. His sensors indicated that they were alive but either the comm was down or they weren't conscious.
He switched channels. "Tosis Mire to Corpus Mundi"..........."Corpus Mundi receiving.....We're having trouble with our sensors......it appears that you aren't on board Voidspan......recalibrating sensors......."
"Don't bother" interrupted Tosis, "The entire detachment has been teleported into space. Request immediate extraction, lock on to my signal and send a Storm Eagle to extract me."
Posted by Castigator at 01:20