I've done pretty well over winter and resisted the urge to buy more plastic crack, well almost....although truth be told, I have more than enough unpainted stuff to keep me going for a lifetime. 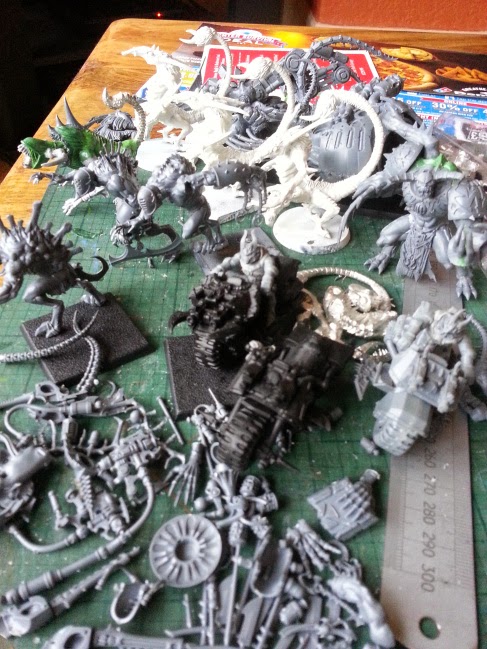 I still have too many projects on the go at the same time and to make matters worse Forge World had the temerity to release Imperial Armour 13 with all its seductively enticing models that scream to be purchased. Fortunately I'm made of stern stuff and resisted the urge to splash out on any of it.....honest.....what this old thing?....Nah, I've had it for ages......honest......
Okay, so maybe I had a momentary lapse and bought a Sicaran Battle Tank....oh and I just had to get the Fire Raptor because? Well it would be rude not to, right?

So now, not only do I have a new Nestor Lustheart on a bike (part built), 5 Engineered Spawn (part built), 5 Noise Marines (part built), a boon reward Daemon Prince (built), a boon reward Spawn (built) and a Vindicator (just needs a few touch ups) to finish, I also have a Sicaran Battle Tank and a Fire Raptor partly built....oops.....it's safe to say my Hobby Butterfly Syndrome (HBS) is flaring up again.
I spent today putting the base colours on the hull of the Fire Raptor (it's a right bugger to build!) while looking at my Sicaran Battle Tank and thinking I should do that first. Then I keep thinking I should finish my engineered Spawn as I'm using them in every game these days, but I'm also using Nestor on his bike as well so maybe I better finish him.....or even finish my Vindicator as that always sees plenty of action....hmm....decisions, decisions.....

So then I had an idea on how to decide what I should paint first. I'll put the question up on my blog and let someone else decide......genius!
So here's the chance to help a HBS sufferer overcome this debilitating condition and get me painting one thing at a time. Here are the options.

Please help a HBS sufferer out and leave your suggestion below.