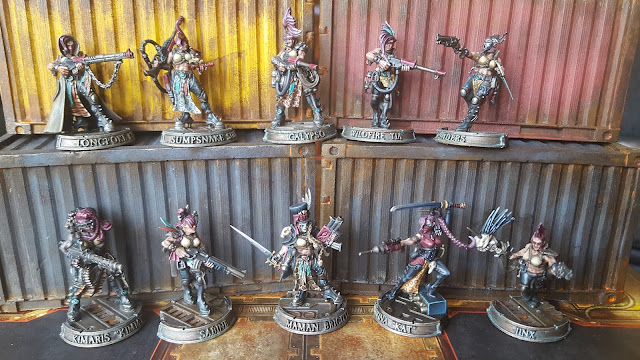 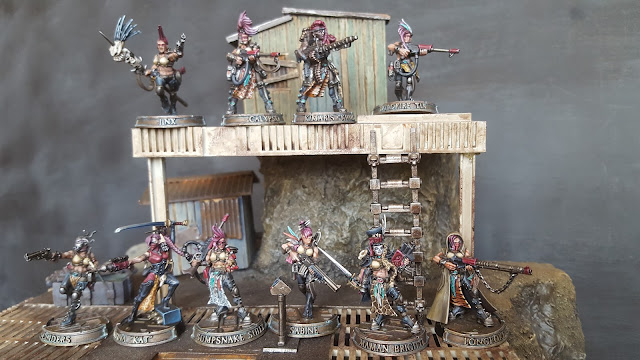 Zombie was initially developed as a powerful toxin for the Voodoo Dolls' Needle weapons but it was quickly found to have Psycho-hypnotic properties. Those under its influence would divulge any information and its Psycho-suggestive properties would leave the subject eager to satisfy any demand made upon them. The Voodoo Dolls' discovered that the toxin altered Serotonin within the brain, stimulating nerve cells to produce a euphoric state if the subject accomplished any task asked of them.

Eager to exploit this discovery, the Voodoo Dolls trialled the drug across several factories on the unsuspecting workforce. The results were remarkable, production improved tenfold along with workers' moral. Factory Overseers began distributing the drug throughout local Manufactory Zones and it proved so popular that workers eagerly paid for it themselves. Many of the workers literally worked themselves to death, but life is cheap on Necromunda...and at least they died happy.

Thanks to its euphoria inducing properties Zombie soon found its way into the pleasure dens that litter the Hive and it was rumoured that even those above the Wall made use of it for recreational purposes.
As its popularity grew, so did the Voodoo Dolls fortunes. Their standing within House Escher grew exponentially and there were rumours that it would only be a matter of time before Queen Adina offered the Voodoo Dolls' leader a place on her court of nobles.
The Voodoo Dolls' meteoric rise would soon come crashing down however.

Nobody knew who sent the Death-Cult Assassin to eliminate the Voodoo Dolls' leader Maman Brigitte, perhaps it was a jealous rival or a noble within House Escher's ruling court who was fearful for their position. It mattered not who sent her but the result had a profound effect on the Voodoo Dolls' fortunes.


Like many of the sanctioned Death-Cult Assassins, the Scarlet Blade was inducted into her order at a young age. Years of training, psychological testing and psychic conditioning had produced the ultimate killing machine. A machine that couldn't be reasoned with, bribed or deterred from completing its mission.
So confident were House Escher of Maman Brigitte's inevitable demise that a conclave was held to discuss who would take over the Voodoo Dolls' turf. It was during this meeting that Brigitte walked in declaring "Reports of my death are greatly exaggerated!"
Cheers and applause greeted her unexpected arrival, even her fiercest rivals grudgingly applauded her ability to defeat a Death Cult Assassin. The revelry was soon cut short when Brigitte introduced her newest champion...Katrina, formerly known as the Scarlet Blade!
News of a Death Cult Assassin forsaking her vows to join the Voodoo Dolls spread through Hive Primus like wildfire. Many scoffed at the idea and thought it a hoax. Others whispered of heretical practices, how else could a Psychically trained Assassin be broken if not with witchcraft?
The truth lay in the gang's exclusive drug Zombie.


Extensive tests revealed a startling property of the drug. Not only did Zombie stimulate nerve cells within the brain, it also stripped away post-hypnotic or psychic commands. More startling still was that Zombie blocked various pathways preventing Psykers from accessing their abilities and that prolonged use of the drug would make this permanent!
Despite all the possibilities that Zombie promised or maybe because of it, the Voodoo Dolls were declared Narco-Terrorists by Lord Helmawr himself.
Adeptus Arbites, Bounty Hunters, rival House gangs and even a contingent of Lord Helmawr's personal guard, Helmawr's Hounds stormed the Voodoo Dolls' processing manufactoriums, smashing the Synth-Stills and Vats and gunning down anybody unfortunate enough to be present. In a single cycle the Voodoo Dolls lost almost everything...almost.

For all the jealous rivals and enemies that the Voodoo Dolls had amassed, they still had friends and allies within House Escher. Maman Brigitte was warned of the gang's impending purge and when the attacks began Brigitte and those close to her fought a long running gun battle as they fled downhive from the carnage.
Many of the Voodoo Dolls fell to the Arbites and Bounty Hunters during the purge but most who broke free from the initial assaults fell as they fled through rival gang territory. The gang was reduced to less than twenty fighters before they reached their old stomping ground in the Sump Swamps.

Many of the gangs refused to enter the Sump Swamps to pursue the Voodoo Dolls. Those that did soon came to regret it. The Dolls' knowledge of the area proved formidable, it wasn't just the Escher Needlers and Stilettos that were poisonous, most of the flora and fauna was toxic as well. The hunters became the hunted.
Over a hundred gangers followed the Voodoo Dolls into the Sump Swamps, a mere handful made it out alive. Those that did never saw their assailants. Some spoke of leeches the size of a man's arm, others of snakes that could swallow a man whole. Many were dragged beneath the turgid 'waters' by creatures straight out of a nightmare.

With the Voodoo Dolls' powerbase destroyed and the gang reduced to a fraction of its former size, Helmawr's Hounds and the Arbites considered their work done. Bounty Hunters patrolled the outskirts of the swamps for a time but when no confirmed sightings of the gang were reported most left to pursue more accessible quarry. After a time even the most dogged of the Bounty Hunters moved on and the Underhive returned to its usual business. 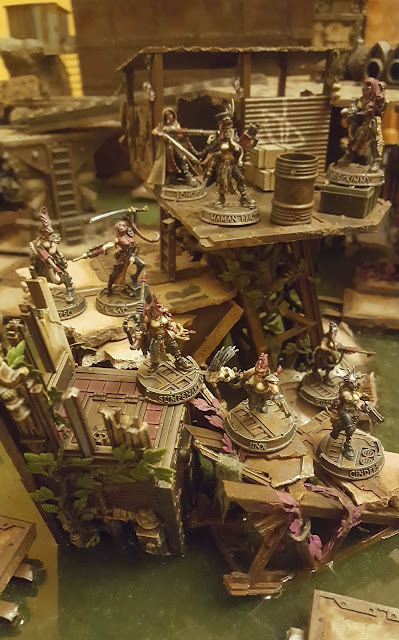 When the Voodoo Dolls finally ventured out from the sanctuary of the Sump Swamp, gone were the bright ostentatious hair colours. Each ganger's hair was daubed with the reddish sediment that was prevalent throughout the swamp.
The gang was diminished, a mere ten remained, but they had survived all that the Hive could throw at them and have returned with murder in the heart!

Until next time....may Our Lady grant you her number! 😉