The monitor flickered as the Servo-Skull rose above the settlement to give him a commanding view of the area. Acknowledgement codes flashed briefly across the screen from his Servo-Stalkers as they came into view but otherwise they stood motionless, like long forgotten grotesques guarding an ancient and crumbling mausoleum...which, if everything went according to plan, is exactly what Clearwater would be for the Clean-Up Crew and the Voodoo Dolls.


Greetings Sinners!
Thanks to their reluctant guides both gangs are entering the domain of the Puppet Master and are searching for his lair. They have narrowed their search for clues to a possible 8 locations and both gangs will be attempting to scout them out. 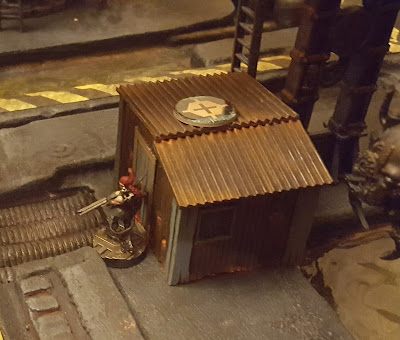 Scouting a location
Each location must be broken into. This can be achieved by smashing it open (strength test) or picking the lock (Intelligence test). Similar to opening a Loot Casket.

Unfortunately for our heroes, the domain of the Puppet Master is inhabited by all manner of entities. 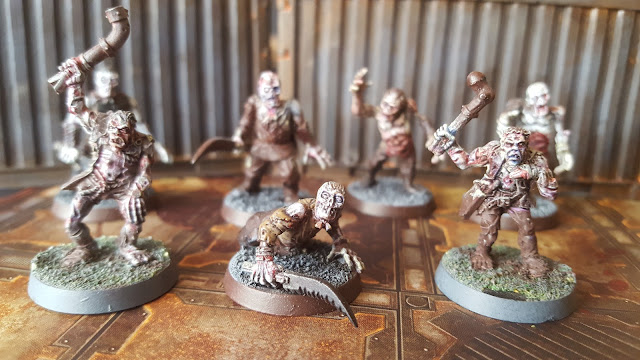 Lurkers
The Underhive is full of dark and dank places and Clearwater is no different. Known as Lurkers by the locals, these unfortunate creatures shun the light. They dwell in the shadows waiting patiently to drag the unwary into their realm of darkness. 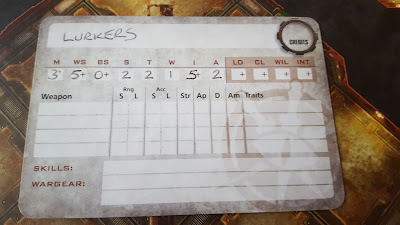 Once a location has been successfully scouted, a card is drawn from the Location Deck.

The Location Deck is made up from 8 playing cards (one for each location). These are numbered 3, 3, 3, 4, 4, 5, 6 & a Joker. The Joker is the hidden entrance that the two gangs are searching for. The numbered cards represent the number of Lurkers that are waiting for the unlucky individual that opened the door. The Ganger makes a free move up to his movement characteristic away from the door. The Lurkers are placed as close to the door as possible.
A ganger receives 1 Experience for each Lurker that they kill. In addition, each Lurker scalp earns the gang 5 credits.

Local Knowledge
Both gangs have acquired the services of local guides from the previous game. Each local guide allows a gang to discard one Location Deck card. This represents their local knowledge in how to avoid the Lurkers. 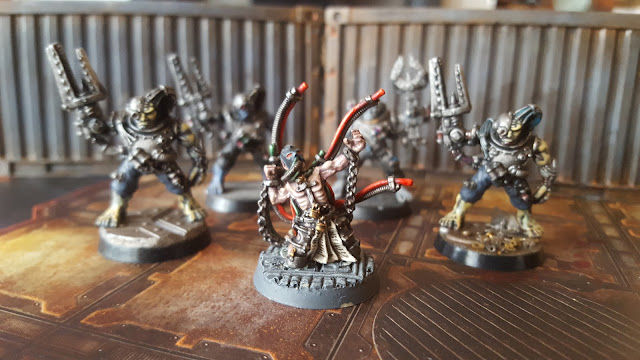 Servo-Stalkers
Unlike the Lurkers, these servants of the Puppet Master prowl ominously in the light. At first glance they appear to be nothing more than Servo-Haulers, and some of them may have started out that way, but their purpose has been corrupted and those unlucky enough to cross their path soon come to regret it. 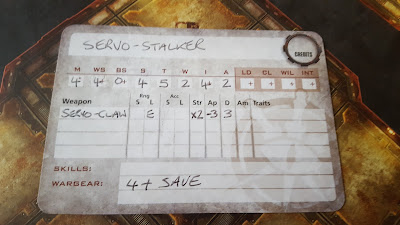 The Clean-Up Crew quickly moved up and readied themselves to deal with the Servo-Stalkers. Janitor and a ganger closed in, carefully keeping out of sight of the Stalker guarding the shack. 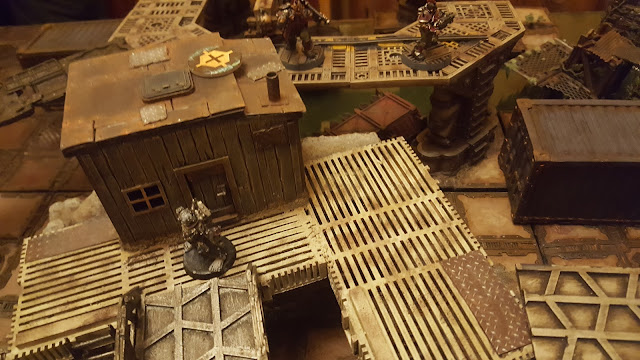 On the west side the Goliath champion Dexter and another ganger made for the mine shaft.... 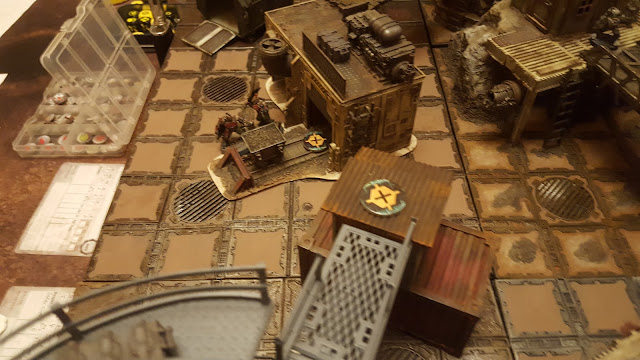 .....while on the East side Kanu wounded a Servo- Stalker with his grenade launcher. The Goliath champion Sinister moved into position to attack him. 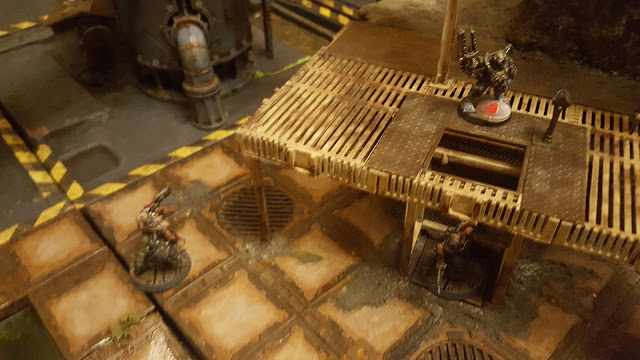 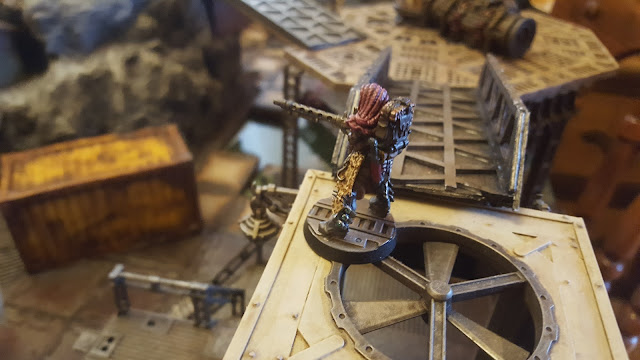 .....the Voodoo Dolls were soon overrun by the Puppet Master's Servants. 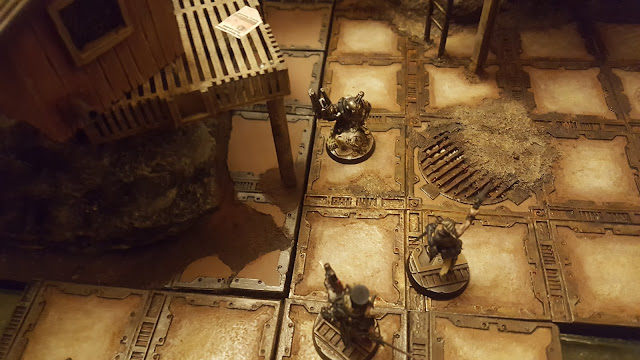 The Juve Cinders took a wound from one of them with her Stub Gun but the rest of the Dolls' firepower proved ineffective. To make matters worse, three of Voodoo Dolls' weapons jammed leaving them unable to shoot. 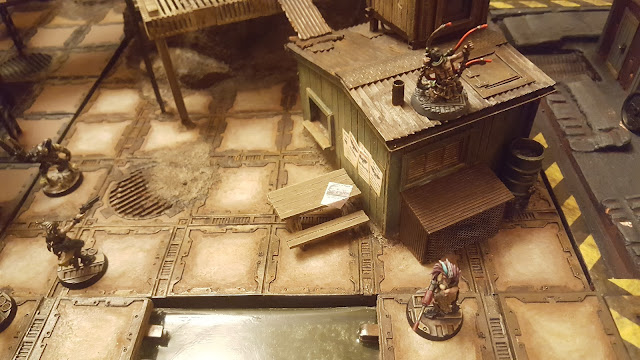 The Goliath's Juve successfully smashed open a door and jumped back as 3 Lurkers came out. 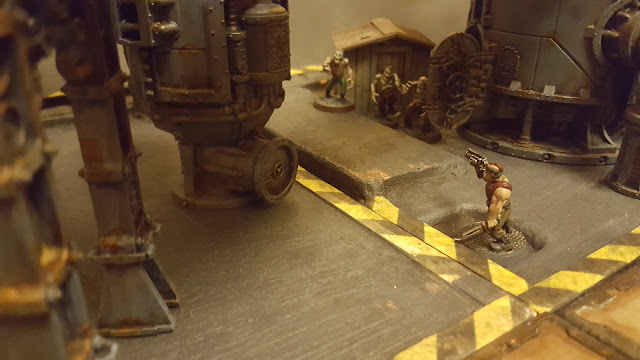 Sinister leapt out of the lift and attacked the wounded Servo-Stalker.... 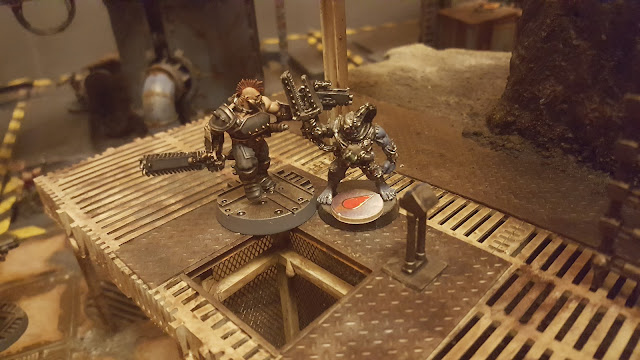 ......taking it out with ruthless efficiency. 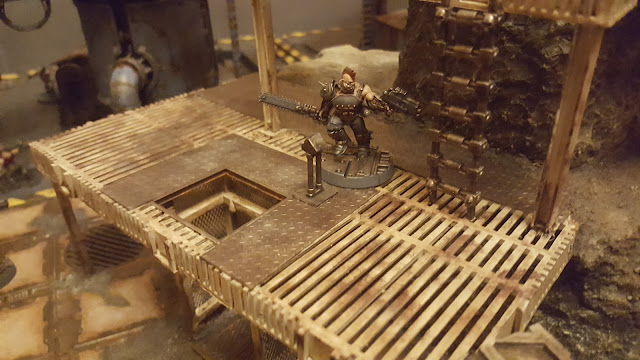 On the West side the Goliaths successfully opened the mine shaft and with the help of some 'local knowledge' discovered it was empty. 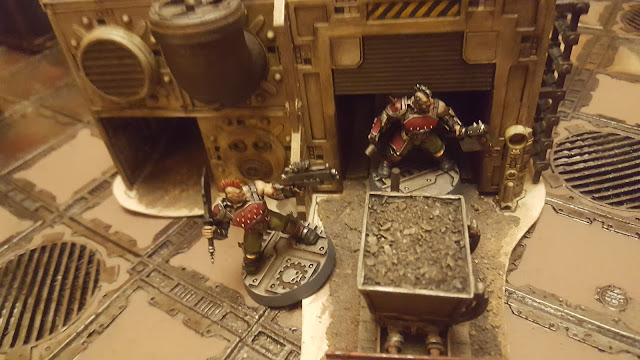 It didn't all go the Goliaths way however. Janitor and his ganger attempted to jump the gap to attack a Servo-Stalker but both failed to make it across and plummeted to the ground. Fortunately, nothing but their pride was hurt. 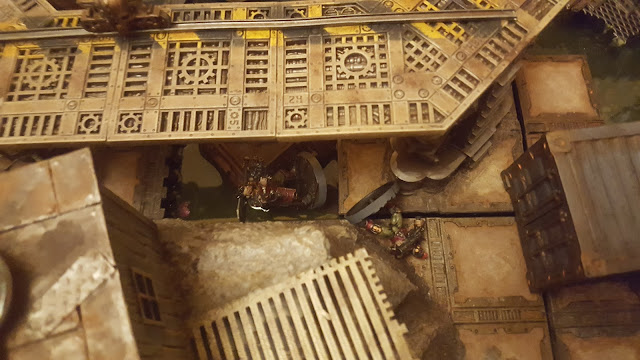 Things were going horribly wrong for the Voodoo Dolls. Brigitte and Cinders charged a Servo-Stalker and despite 6 attacks piercing its hide, the Stalker shrugged off the effect of their blade's toxins. To make matters worse, the Dolls' leader was seriously injured with only the presence of Cinders stopping it from finishing her off. 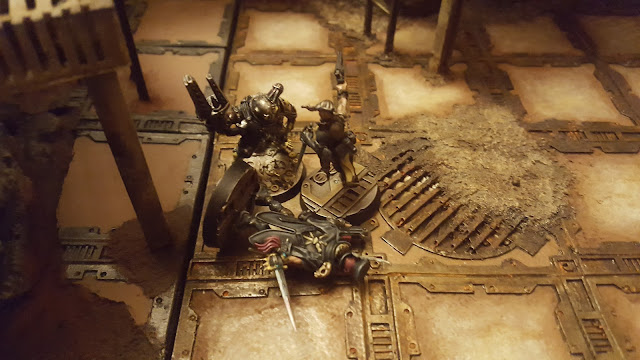 Sabine sprinted over to one the locations but couldn't pick the lock to gain entry to the shack. 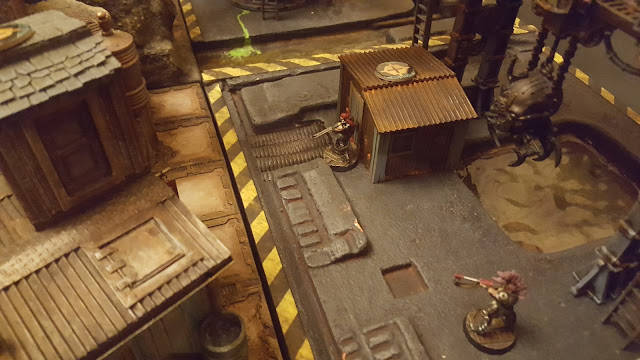 The Goliath's Juve Grimey charged into a Lurker and took him down. Kano toyed with the idea of helping out the young Juve, but decided that "the young 'un shouldn't go sticking his nose into things if he couldn't handle the consequences". He levelled his grenade launcher at Sabine instead and put her down with a Krak grende 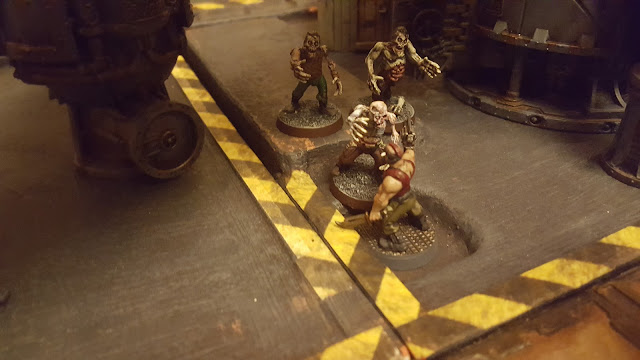 .
Dexter turned his attention to the Voodoo Dolls Champion and Juve that were closing in on his position..... 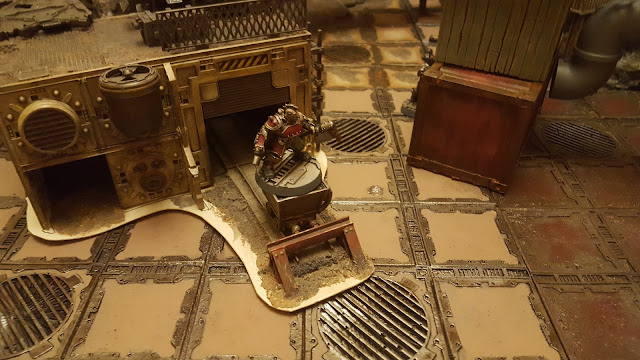 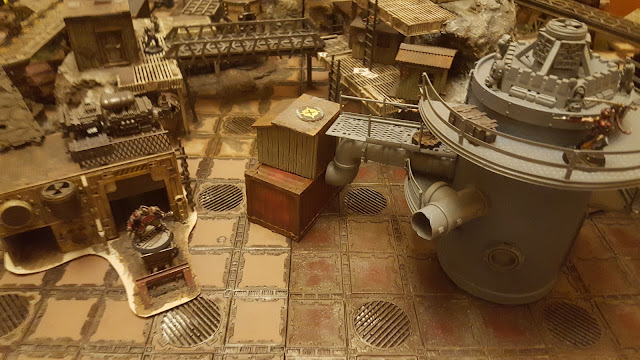 .....and seriously injuring the Champion. 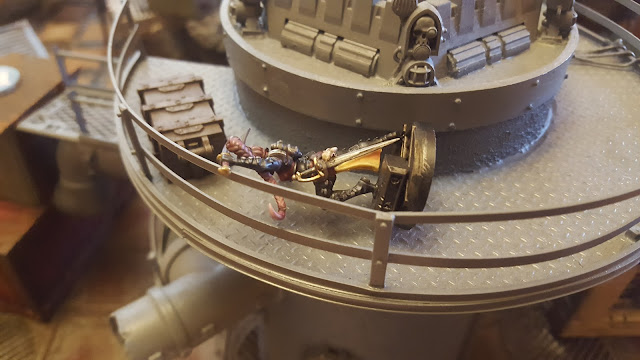 His success with his Grenade Launcher alerted a Servo-Stalker to their presence, and its 'seek and destroy' protocol was activated. 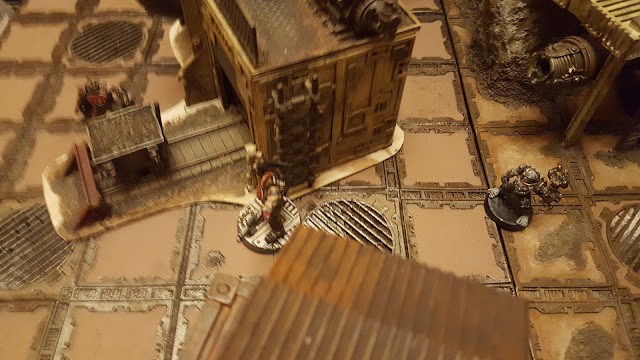 As the Stalker closed the distance on them..... 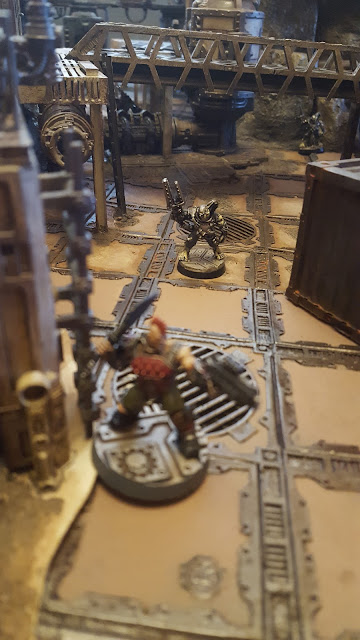 .....the Goliath Leader moved up behind it and fried its circuits with his Plasma Pistol. 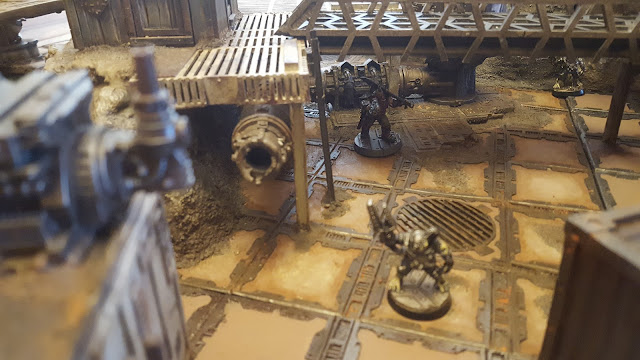 Over on the East side Grimey fell to the Lurkers and they moved in on Kano. 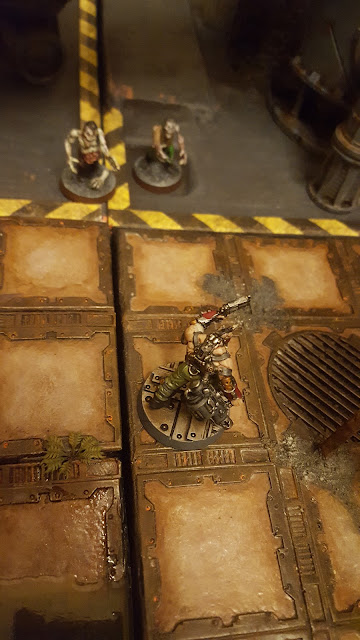 The Voodoo Dolls were in deep water. Cinders was seriously injured by the Servo-Stalker and with Brigitte already down both of them went out of action. 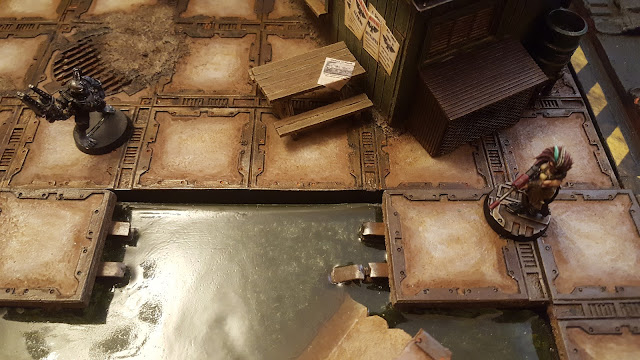 Longpoke Kari tried to slow down the Stalker but her shot failed to hit. 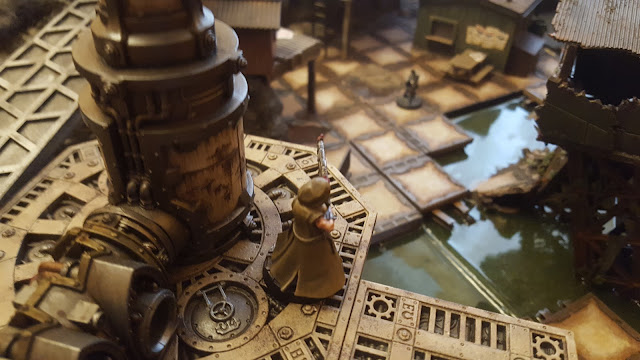 With so many of the Dolls out of action or seriously injured.... 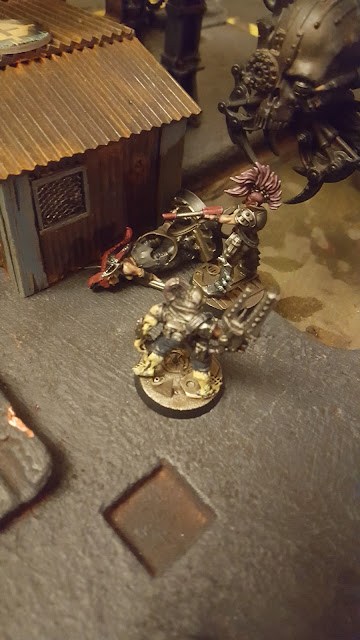 ...their nerve broke and they Bottled Out.
Neither gang had discovered the location to the entrance of the Puppet Master's lair but the Goliaths had ruled out two of them.


Kimaris waited patiently as the Doc administered to the wounded. Kat, Sabine and Cinders would be fine. Mammon Brigitte was concussed and they would have to brave the Servo-Stalkers again without her. It was touch and go with the young Juve Jinx however.
Finally the Doc emerged from the shack they had taken shelter in.
"Well?" asked Kimaris.
"She has a spinal injury, but she'll recover." came the answer. "She'll have some weakness down her left side though and it's unknown if it'll be permanent. She's tough 'un alright, not many can take a Krak Grenade and survive.....with some rest she should be good to do it all over again."
Kimaris nodded.
"Two down." she muttered.
"Now might be the time to show the rest of the Voodoo Dolls what a change of leadership can offer" She mused.....