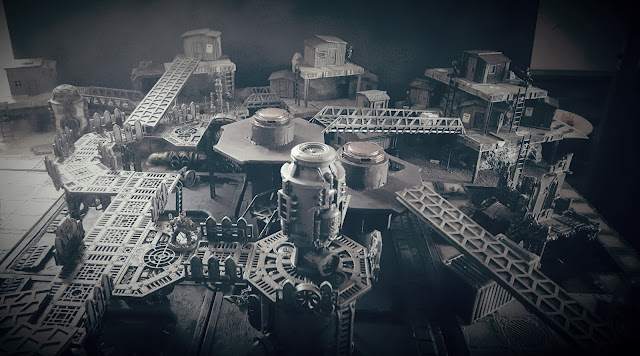 Wiping away the grime from the filthy window, Tia looked out across the settlement of Pump House. A lumbering Goliath wandered aimlessly across a nearby gantry, eliciting a smile from the Escher's blood encrusted lips. Even stripped of her weapons and shackled, the Goliaths were still wary of her, she thought.
In the distance she could just make out the distinctive hills that gave the gave the zone of Rockridge its name. She looked longingly at those hills, that's where her sisters will come from she mused; if they come at all.... 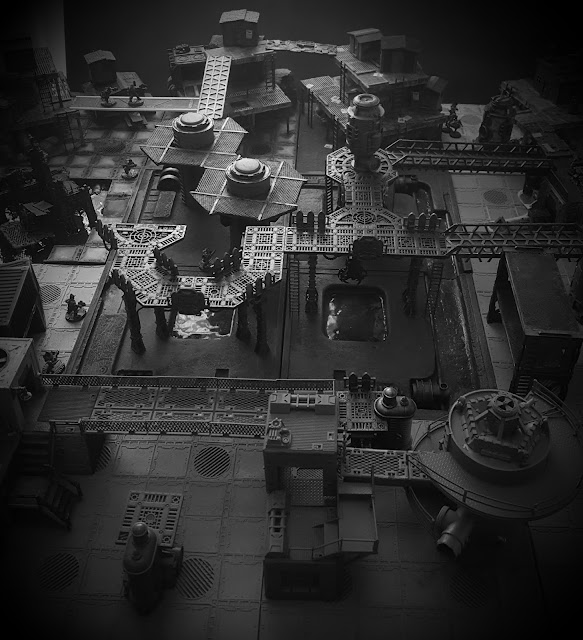 Tia grunted as a well aimed kick to the midriff forced the air from her lungs. She glared at Kano with murderous intent.
"Not long now, my pretty." Bellowed the Goliath. "I'm gonna miss these little discussions when you're gone." Aiming another kick towards her. Tia grunted once more, fulfilling her part in the conversation.
"Why don't we keep her? asked Grimey guarding the door.
Kano laughed at the young juve's suggestion. "You ain't never seen an Escher up close like this before have you?"
Grimey blushed, it was true, the Goliath juve had only ever seen them at a distance and he couldn't help but admire her physic and her steely determination not to talk.
Kano laughed again "You sweet on her boy?" aiming another kick towards Tia. "Well don't be. Look at her eyes boy. See that look she has? She'd gut you as soon as she had a chance. She's already noticed that knife hidden in your boot."
The young juve instinctively tapped his boot to make sure his knife was still there.
"Nah, forget that idea boy. The sooner the Guilders arrive to take her off our hands, the better." Said Kano before kicking Tia one last time and ushering the juve outside.

Tia let out a low moan as she checked her ribs from her tormentor's attentions, she propped herself against the old generator she was shackled to. No matter what happens, she thought, I promise to leave my mark on that bastard Kano before the Guilders arrive.
The low hum of the generator reminded her of the buzz gnats back in Stranglevine Creek, closing her eyes she drifted into sleep and dreamed of home.... 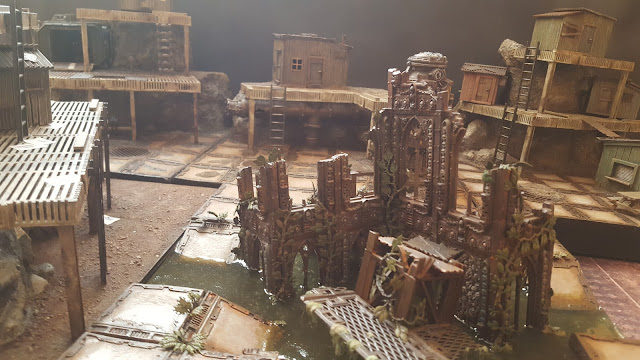 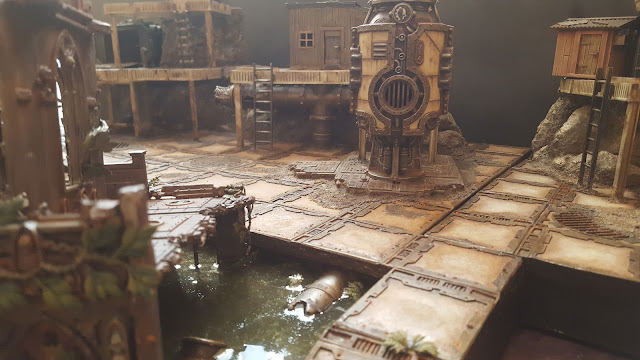 ......and Wildsnake 2nd best flows freely from the Winchester. 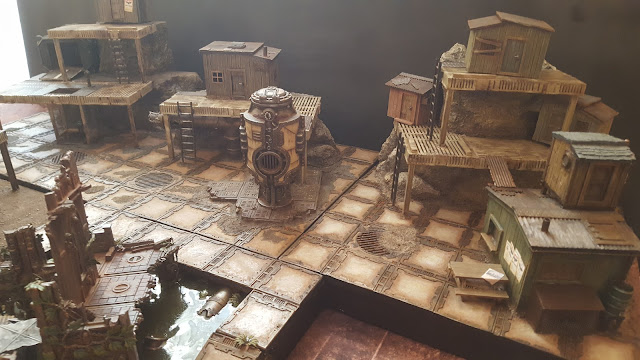 She woke to the sound of voices coming from outside. She recognised Kano and Grimey's voice but the other was new to her and carried more authority.
"The Guilders will be here at the beginning of the next cycle, so your watch is almost over." said the mystery voice.
"About bloody time" replied Kano, "I was worried young Grimey here was about to elope with her."
The unmistakable sound of a slap stopped the juve mid-protest and the raucous laughter that followed it faded as the Goliaths walked away.
She had been here too long to believe that her sisters would mount a rescue attempt now. She didn't even know if the Voodoo Dolls had survived the failed attack on the Goliath's stronghold.
She thought back to the beginning of the Turf War between the Voodoo Dolls and the Clean Up Crew. 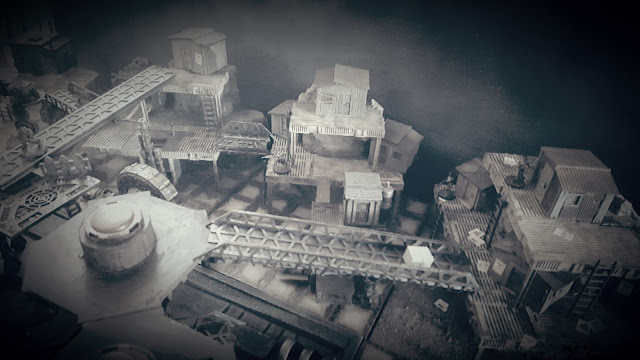 The two gangs had stumbled across each other in neutral territory and despite Kat gutting a Goliath and Tia taking out an overconfident juve early on..... 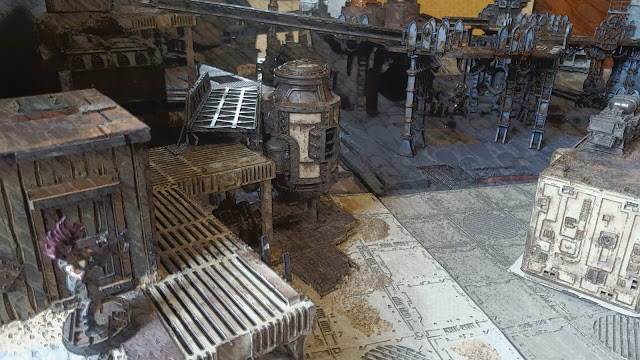 ......the Goliaths had shown remarkable tenacity and fought back...... 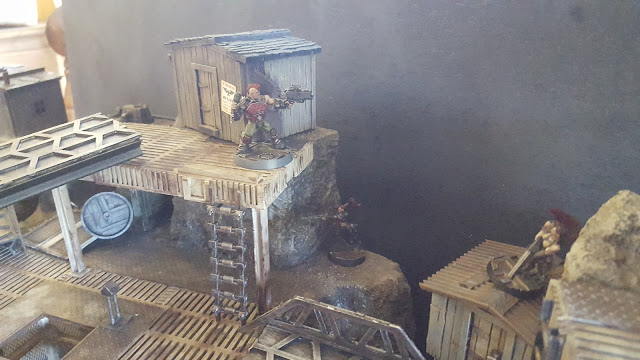 ......killing poor Mia and two fresh-faced juves. When the Escher champion Kat went out of action, Maman Brigitte ordered them to retreat. 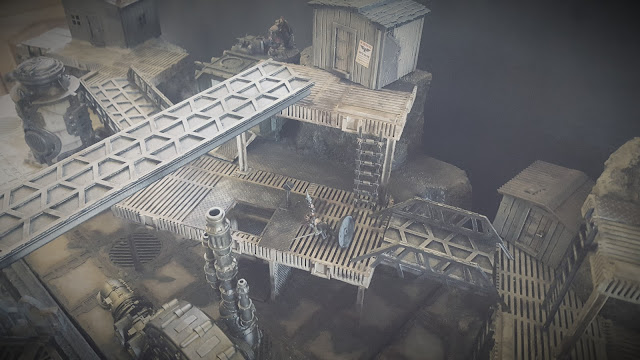 The loss of Mia hit the Dolls hard and a Sneak Attack was planned at her wake. With Kat still in recovery, the loss of the Ganger Mia and only one replacement found for the two juves lost, a much reduced gang infiltrated the pump house ready to exact their revenge. 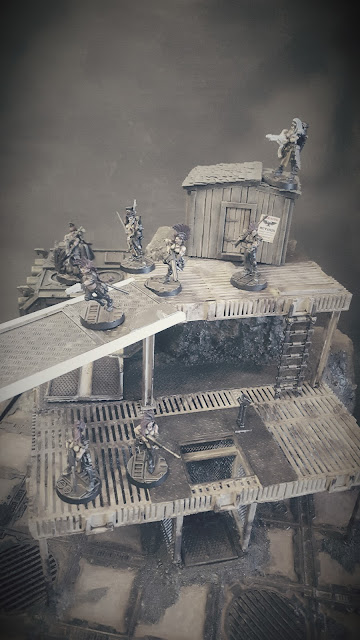 The Dolls had taken their time moving into position..... 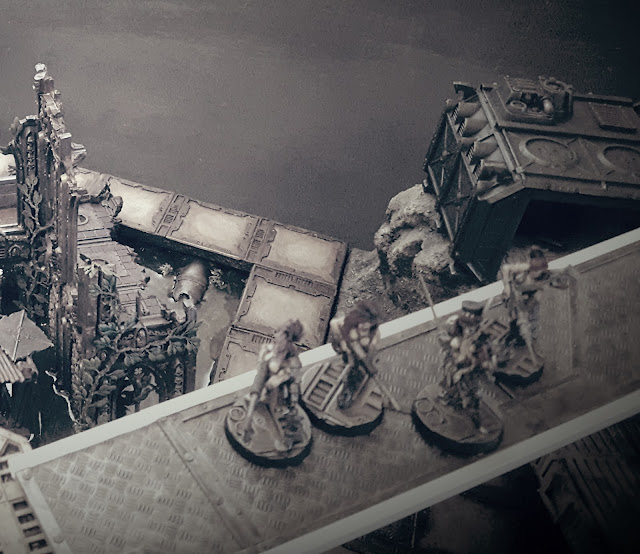 ....but either the Goliaths were lucky or somebody had talked. As soon as the alarm was raised, the entire Clean-Up Crew turned up...... 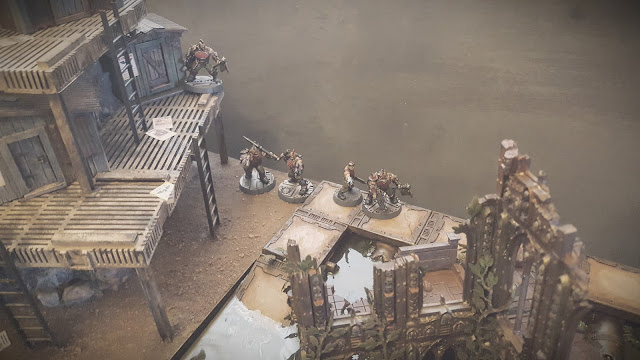 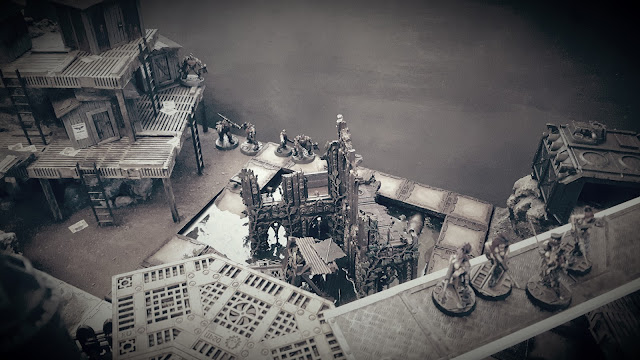 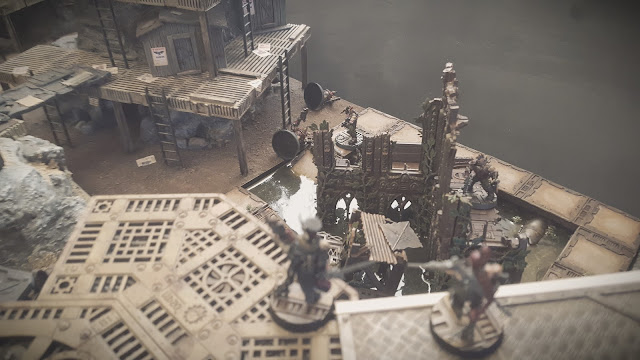 ......while Jinx, the recently recruited juve, took out Kano with her Stub gun, before expertly administering the Coup de Grace. 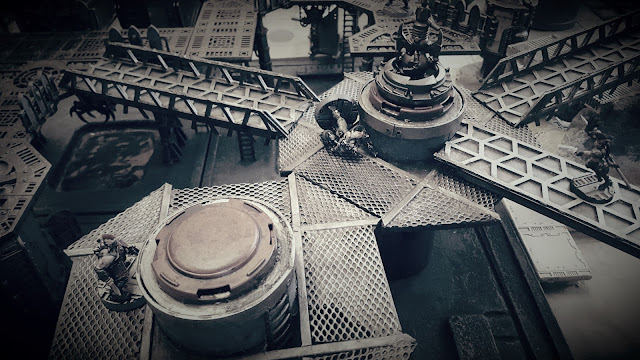 Despite the covering fire from Kimaris' heavy Stubber, the Escher had been seriously outmanoeuvred by the Clean-Up Crew and only Tia was left standing on the gantry. 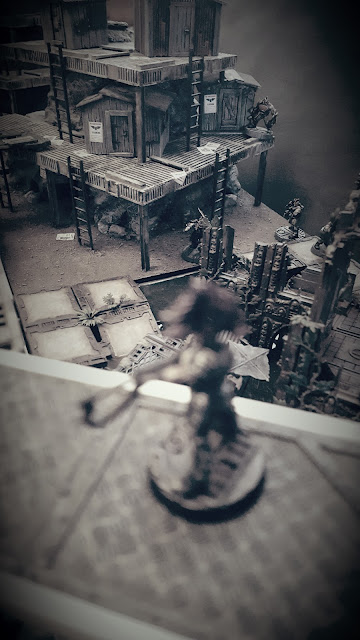 Maman Brigitte was blasted off her feet and the Escher leader plummeted to the ground. Tia took out a Goliath juve with her trusty Lasgun who had glory in his sights as he moved in on the seriously injured Escher leader. Just as Maman Brigitte ordered the gang retreat, a Goliath hit Tia with a Krak Grenade and darkness took her.

"And here I am", she thought to herself as she worked on the lock to her shackles with her hair clip. A satisfying click rewarded her efforts and Tia smiled to herself as she slipped her bonds. She looked around the old generator room for something to use as a weapon. She knew she had no chance of escape but she might take one or two of them with her before they took her out. Her eyes settled on a wrench and she tested it for weight. "That'll do nicely" she thought as she put her ear to the door and listened intently.
All was quiet. All she could hear was the hum of the old generator. No laughter, no conversation, no movement, just the relentless hum of the generator. Patiently she waited but still she could hear nothing. She shifted her weight onto the other foot and shook out the stiffness in her arms. Phhutt! "Wait...what was that?" she thought. She shook her head and listened again.
Phhutt, Phhutt! The unmistakable sound of a Lasgun being fired. "Bastards are probably shooting into the air to celebrate the arrival of the Guilders" she thought. "I'll give them something to shoot at when they come for me" she said as she swung the wrench about her to loosen her shoulders.
A loud explosion interrupted her thoughts, followed by screaming and shouting. Something slammed into the door and Tia stepped back raising the wrench. "Here we go" she thought to herself.
The door burst open and Tia swung the wrench with all her might. Before the wrench had even found its target her wrist was blocked by her intended victim's forearm.
"Whoa girl, is that anyway to greet your wife?"
Tia's mouth fell open. There stood before her was Calypso, with Kat the Escher champion behind her.
"Come on girl, it's time we got you back home. We've downed 5 Goliath's and the rest have legged it, but it won't be long before they round up enough locals and come back."
Tia followed them out, taking her Lasgun that her wife offered her. Several Goliaths were lying face down, either unconscious or dead, she didn't really care. All she cared about was going back home to Stranglevine Creek.
"Wait!" she said as a particular Goliath caught her eye. Calypso and Kat turned to look at her questioningly.
"This one is coming with us, I have a score to settle with this bastard!"

Kano moaned as the Escher dragged him towards the sump swamps.