From the ridiculous to the Sublime 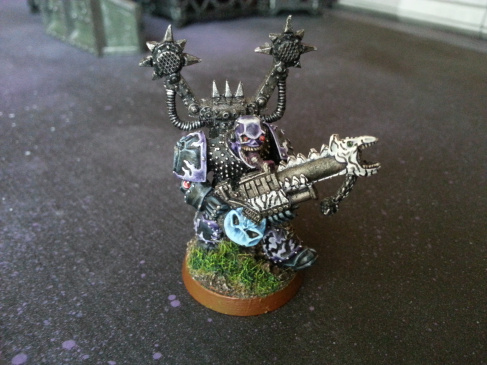 Greetings Sinners!
With my tournament season over for this year, I'm struggling to find the motivation to paint anything at the moment. To get my painting mojo back, I'm going to embrace my Hobby Butterfly Syndrome and concentrate on one model at a time and then jump to something totally different. Lately, I've been speed painting ridiculously large models, so where better to start than with a member of Squad Sublime.


Squad Sublime has been a staple part of the Castigators pretty much since their inception. Their psychosonically explosive attacks have sent Bloodthirsters screaming back into the warp. Their Sonic energy has ripped through countless Space Marines, splitting their armour and bursting organs, leaving those that still lived sprawling in the dirt, wracked with brain-damaged spasms. They've even hacked down an Avatar of Khaine in combat using a Blastmaster as a club! But without a doubt, their greatest achievement was catching Vorlath of the Emperors Children in a carefully coordinated ambush and allowing Nestor to claim the title Chosen of Slaanesh.
Yes, throughout all of the editions of 40k, Squad Sublime have been there, teasing me, leading me down the dark twisted path of obsession on a journey that has shown me joy, pain, frustration, defeat, victory, pride and fulfilment.
With such a rich and glorious history, I figured it was only right that they should receive an update as they're looking a bit dated.

I've mentioned before that I'm not the biggest fan of the 2nd edition Noise Marines. Their bodies are too short, the skull-like heads don't really work with their torso and their back packs look a bit too inelegant for a Marine that appreciates aesthetics.
With this in mind, I set about converting one up last year in an attempt to make a Noise Marine that was aesthetically more pleasing, here's the result:

The Torso
I still like the old Noise Marine legs but the body just had to go, so I carefully sawed one in half and added a plastic chaos marine torso. This test Noise Marine wass going to be my Icon of Excess, so I've added the abs of an old metal daemonette as the torso will be open. For my others, I will probably use a standard plastic Chaos Marine torso as the Sonic Blaster will cover it, but if I'm just building them one at a time, I might do every one differently. 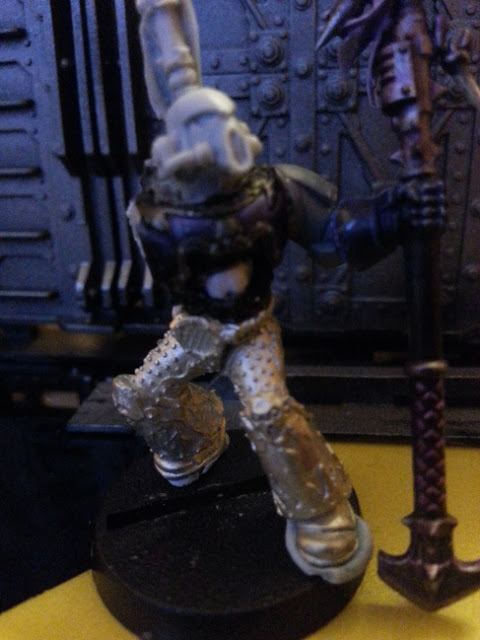 The Arms
This particular chap was going to be my Icon Bearer, so I used the upper left arm from a Raptor. I cut the glove off at the elbow and replaced it with the Chaos Terminator Sorceror hand that holds the Force Staff. The top of the Force Staff was replaced with a Slaanesh Icon from the Plastic Daemonette box.

His right arm would hold the newer Sonic Blaster that I got from GW. You get 5 Sonic Blasters and a Blastmaster for £9, so it’s not a bad deal. I was a bit hesitant at first because they’re finecast, but they all look pretty good and the reduced weight will, hopefully, make the finished model more stable. As this Noise Marine will be holding his weapon one handed, I had to adjust the angle of the arm from the shoulder pad. This is one of the advantages of fine cast, it was very easy to cut just below the Shoulder Pad, leaving the cabling intact. Then, after watching my mate Michael use a cup of tea to straighten his finecast staffs on his Necron warriors every time he took them out of their case, I simply dipped the arm in hot water and twisted it to the desired position. 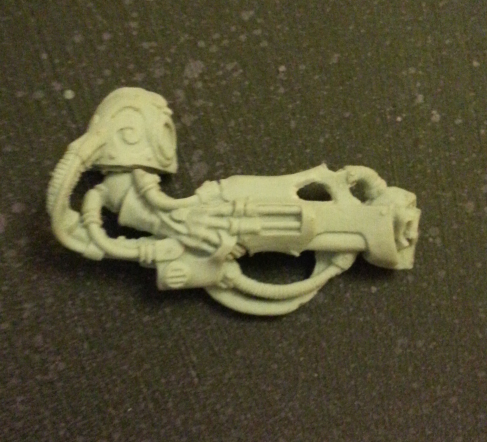 The Back Pack
The backpack on my old Noise Marines is the one thing that I've never liked. The arms with the spiky speakers not only look like they were designed by an Ork, they also unbalance the model. The back pack that comes with the latest Noise Marine champion looks much better and is the one I plan on using…if I can find enough of them. 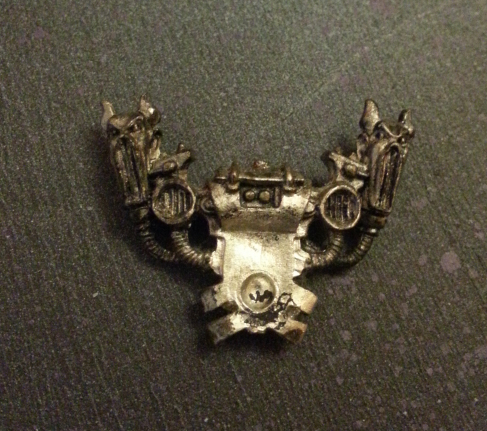 Putting it all together
This was how it looked when it all went together. 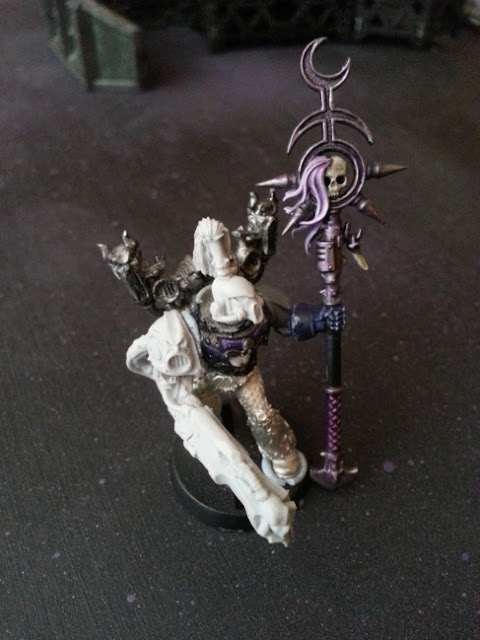 After showing this to the Cold Steel Mercs, Rob mentioned that the Sonic Blaster didn't look right being wielded one handed as the weapon looked too cumbersome to be used in such a way. I had to agree with him, so I chopped it off and repositioned it so that he is now carrying it rather than attempting to use it.

Painting it up
Although they're Noise Marines, I wanted no doubts that this Noise Marine was a Castigator before he became a Noise Marine, so instead of the usual pinks and blacks that are usually associated with them, I used a Lilac colour made from the Imperial Purple that is the Castigators colour. A few subtle washes were added to 'distort' the colour, giving it an almost iridescent effect when viewed in 'real life.'
I'm really pleased with how he turned out, I feel he screams Noise Marine but looks much more elegant than his contemporary 2nd edition brothers. 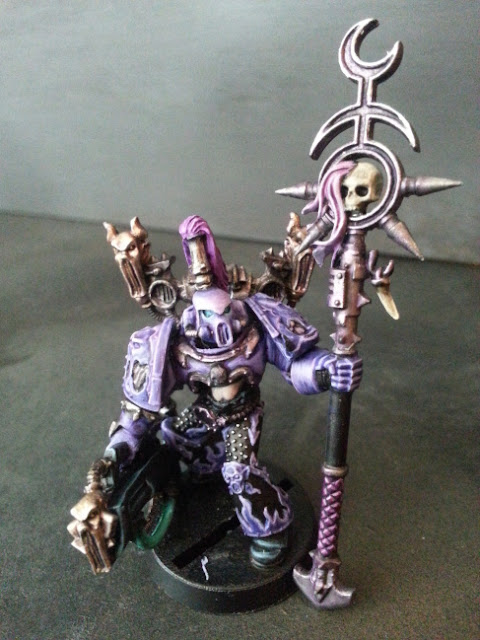 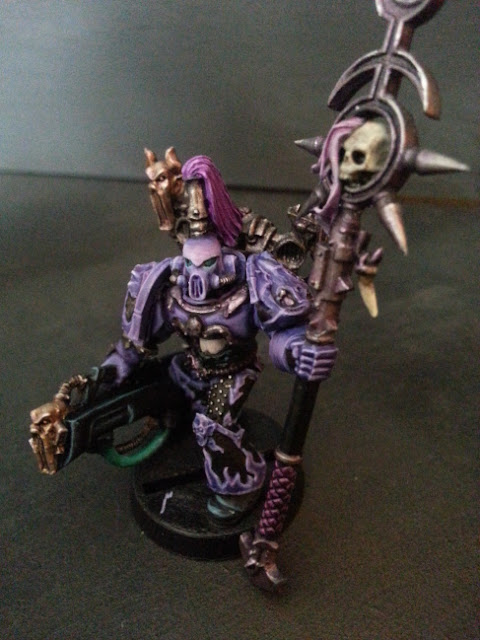 And finally, here's the Marine he replaced. 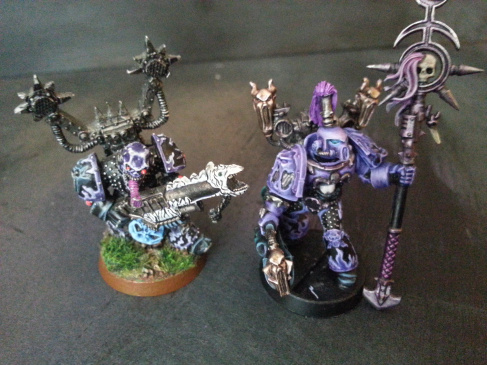 As I said earlier, this was done last year, so I think it's time to return to Squad Sublime once more, I think this time I'll build and paint the Blastmaster toting Noise Marine.
Until next time.....may Our Lady grant you her number ;-)