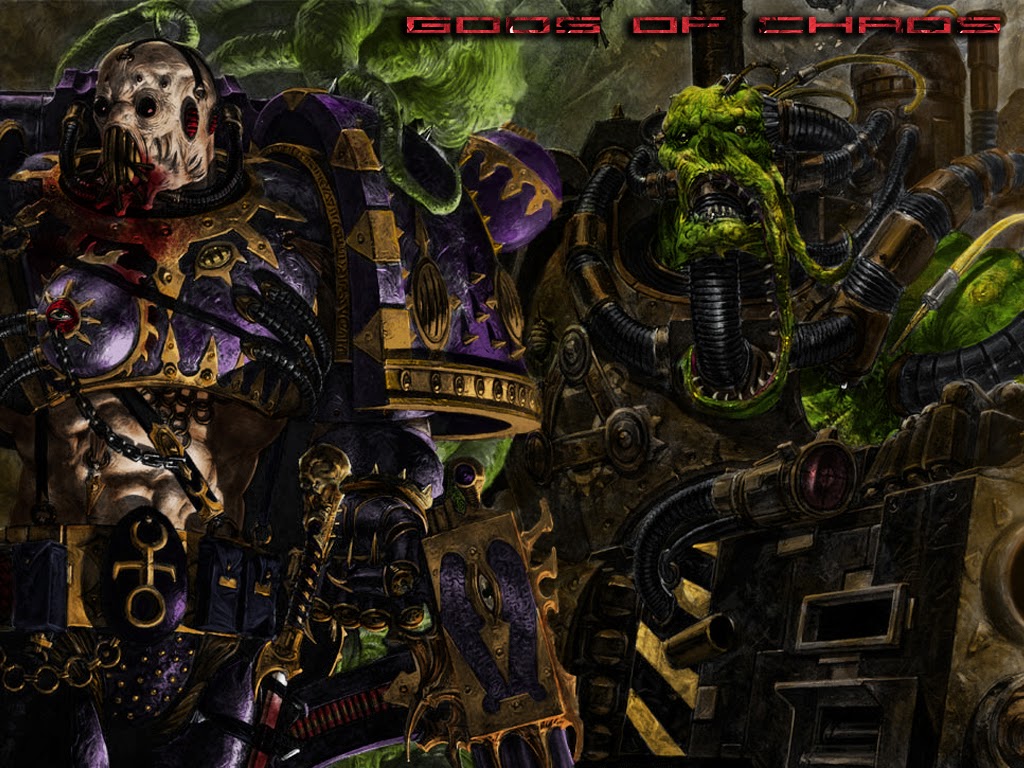 Festus wafted a pudgy hand through the foetid steam that formed the display of the holo vid, his informant from the Legio Cybernetica had been pivotal in providing positional recon on the Castigators. The timely arrival of a heldrake had eased the testing of their strength; it was only his own over confidence that had meant he hadn't come through the skirmish unscathed.
He was under no illusions that the Dark Mechanicum were playing one off against the other, if that was their game, then who was he to refuse?
A push in the right place to inject a little fecundity to the drop site courtesy of an old ally from the legion should keep the Castigators busy while he licked his septic wounds and mustered a host to secure the Dark Mechanicum's services for himself.

Battle 2 – Force Supremacy
Enemy forces clash in the crater-strewn wasteland between the front lines. Each seeks to dominate the warzone, locate a weak point and overwhelm the foe.
Battle Briefing
This battle represents the armies probing one another’s position while seeking to control ground. The victor will gain an advantage in the campaign ahead. Battle 2 is played as the Emperor’s Will.
Objective
Each objective represents a communication array in the enemy lines. Each is equally valuable to the enemy, who will attempt to capture the enemy’s position whilst protecting his own.
Gaining an Advantage
The player who wins the battle has gained the strategic advantage, and is referred to for the rest of the campaign as the Attacker. The other side is referred to as the Defender. The attacker may choose who goes first in the next battle.
Armies
The Castigators 1000pts
Nestor Lustheart – Chaos Lord, Mark of Slaanesh, Steed & Power Weapon.
Squad Sublime – 10 Noise Marines, 2 Blastmasters, 7 Sonic Blasters, led by Nephran Lustviper with Bolt Pistol & CCW.
Squad Divine – 10 Chaos Space Marines, MOS, 2 Melta Guns led by Darius Lewdgrip with Blot Pistol & Powerfist.
Squad Rapture – 5 Chaos Bikers, MoS, 2 Melta Guns led by Korath Vilehorn with Power Weapon.
Corruptus – Chaos Vindicator
Tantalus – Predator with Autocannon Turret & Lascannon Sponsons.
Death Guard
Typhus
21 Zombies
21 Zombies
5 Spawn of Nurgle
3 Nurgle Obliterators
Heldrake
Deployment
We rolled for deployment Rob deployed first

I deployed on the right flank with my Noise Marines firmly ensconced in the ruins over the Castigators' objective. The Predator went behind with the Bikers hugging the right. Squad Sublime accompanied Lord Nestor in reserve to do their usual outflank trick and the Vindicator started in reserve.

Turn 1
Yet again the Castigators stole the initiative. The Bikers moved up the right flank and the Predator moved out from cover.

The Noise Marines opened fire on the Zombies and scythed down 10 of them with their Blastmasters. The Predator shot at the Obliterators but failed to hit them.

The Spawn of the Death Guard sprinted forward as the Zombies made their slow and ponderous shamble towards their Objective. Typhus moved over to protect the the flank of the Obliterators from the Slaaneshi bikers.

The Obliterators fired at the Predator putting a glancing hit on it.
Turn 2
The Castigators' Vindicator turned up and moved into position beside the Predator to target the approaching Spawn. The Bikers swung around to engage Typhus' Zombies. The Vindicator and Noise Marines opened up on the Spawn blasting apart two of the pestilent monstrosities

The Bikers charged into the zombies, With Korath Vilehorn issuing a challenge that the Zombie Champion had no option but to accept (Typhus was too far away from the action to accept). The Bikers hacked apart five of the shambling monsters and easily avoided their clumsy blows but they couldn't avoid Typhus as he scythed down two of them. Korath slaughtered the zombie champion and Slaanesh's gaze turned upon her Champion....Energies coursed through his body, too much for any mortal frame to withstand. Armour cracked open, flesh split asunder and bones cracked open as Slaanesh gifted him with ecstatic agony...behold Korath the Risen, Daemon Prince of Slaanesh!

Rob's turn saw the arrival of Soul-Gorge, his Heldrake, who swooped down the right flank towards the Noise Marines. The Spawn of Nurgle hurtled towards the Slaaneshi firebase intent on exacting some revenge, while the Zombies continued their relentless advance on their objective in the centre.

Soul-Gorge opened up on the Noise Marines and burned 8 of them to a crisp, the Obliterators targeted the Predator with Plasma Cannons, blowing a Lascannon off and immobilising the Vindicator which was next to it. The Spawn charged the remaining Noise Marines, cutting down a marine for no loss. Typhus gurgled a challenge to Korath the Risen and both succeeded in putting a wound on each other. The bikers hacked down two zombies as they failed to do any damage.

Turn 3
Lord Nestor and his entourage arrived and positioned themselves right behind the Heldrake.

The Predator moved 12" away from the combat between the Noise Marines and the Spawn and readied it's guns to snap fire at the Heldrake.

Nestor and his Chaos Space Marines opened fire on the Heldrake and although two shots hit both failed to penetrate the flying behemoth's armour. The Predator tried and failed to hit. Combat saw the Noise Marines butchered by the Spawn, who consolidated towards the Predator.

Korath the Risen challenged Typhus and in a spectacular display of overconfidence missed with all 5 attacks. Typhus on the other hand had no such troubles and hacked away gleefully, causing two wounds, leaving the divine creature on 1 wound. To add insult to injury one of the bikers was torn from his saddle and devoured by the zombies. The fickle gods of Chaos had dealt the Castigators a serious blow!
The Zombies moved over to take control of their objective as the Obliterators moved across to the right to get a line of sight on Nestor and his Chaos Space Marines. The Nurgle Heldrake Soul-Gorge swooped over the immobilised Vindicator wrecking it with Vector Strike and the Spawn moved over to charge the Predator.

The Obliterators shot at the Chaos Space Marines with Assault Cannons but all of the shots were deflected by their armour. Typhus continued his challenge with Korath the Risen but neither could inflict a wound on the other. The Bikers cut down a Zombie for no loss and the combat dragged on. The Castigators' Predator was torn apart by the Spawn who consolidated towards the Castigators' Objective.
Turn 4
Nestor and his entourage ran towards the now empty objective following the Nurgle Heldrakes path.

Korath finally grew weary of Typhus' attentions and in an elegant display of his martial prowess tore him limb from limb! The bikers joyfully hacked down two more zombies.

The Heldrake moved over to the centre of the board as the zombies in the centre milled about their objective. The Spawn moved up to contest the Castigators' objective and keep the ruins between Nestor and themselves while the Nurgle Obliterators moved over to help out the few remaining zombies in combat with Korath and the Bikers.

The Spawn attempted to charge Nestor and his Chaos Space Marines but failed to roll high enough and suffered a wound for their trouble. The Obliterators multi-charged into the bikers and Korath. Feeling the power of his Lady's gaze upon him, Korath tore apart one and wounded another. The zombie and Obliterator couldn't even hit the lightning fast Daemon Prince. The other Obliterator faired better and smashed a biker into the ground who was too busy toying with zombies.

Turn 5
Nestor and his Marines moved through the ruins and pausing only to put a couple of wounds into the Spawn with a meltagun and bolt pistol, charged them, hacking one of the foul abominations apart for no loss.

Korath slaughtered the lone zombie and the Obliterator gutted the remaining biker.
Soul-Gorge flew back into Rob's deployment zone waiting patiently for Korath should he finish the Obliterator. Nestor dispatched a Spawn with contemptuous ease and the rest of his squad finished the remaining spawn. Korath danced around the Obliterator but was evidently more interested in dancing than fighting and only inflicted one wound, the Obliterator struck back and succeeded in wounding him but Slaanesh would allow no harm to come to her favoured one and the wound was saved.

Turn 6
We rolled and the game continued. Night Fighting was in effect, but it made little difference with no ranged weaponry left. Nestor left his Chaos Space Marines to take charge of the Objective and headed over to the Zombies in the centre of the table.

Nestor attempted to charge the cultists but failed to roll the 6" required...even with fleet. Korath revelling in his new found Daemonhood, offered bloody praise to She Who Thirsts with the soul of the Obliterator consolidating towards the Heldrake. Soul-Gorge flew to the right and flamed Korath but failed to wound him. The Zombies spread out to avoid being dragged off their objective should the game continue.

We rolled to see if it continued and the game was over! We both had 3pts for our objectives, Rob had first Blood, I had Slay The Warlord and Line Breaker.....5-4 to the Castigators.
With a roar of frustration Soul-Gorge took to the sky.

The negotiations were short with the Cult Mechanicus. Their flesh however wasn't as resilient as their augmetics, allowing the zombie virus to spread rapidly through the serfs and menials of the forge facility. Typhus soon had a multitude of new devotees for the grandfather.

Intel showed what Festus had feared, Typhus had failed to prevent Nestor  from gaining the favour of the Warpsmiths, now armed with his own Daemon Engine, suddenly he was a force to be reckoned with.
Tosis Mire aspiring champion of the Contagion plague marines approached his sire.
“Blightmaster”...he said with a warm flemmy tone that suggested he was genuinely pleased to see Festus... "With the majority of Mechanicus labour dead or...... living dead the arcane technology holding back the rigours of such close proximity to the warp fracture has started to degrade causing spacial and temporal distortions in the local vicinity." His tone now curt and to the point,"I have ordered summoning rituals to be initiated, that should provide us with the diabolical reinforcement our forces sorely need".

Festus mused on the vagaries of fate. Tosis was right to begin the invocations but he was simply taking too many liberties with his position, his punishment would have to wait however, activating his vox stud he commanded a mustering. "Squad Pestilent and Squad Contagion prep for insertion. Communication Relay Omega has gone silent, No doubt the Castigators are pouring through, we must prevent them from undermining out position on Black Reach".
Posted by Castigator at 00:40