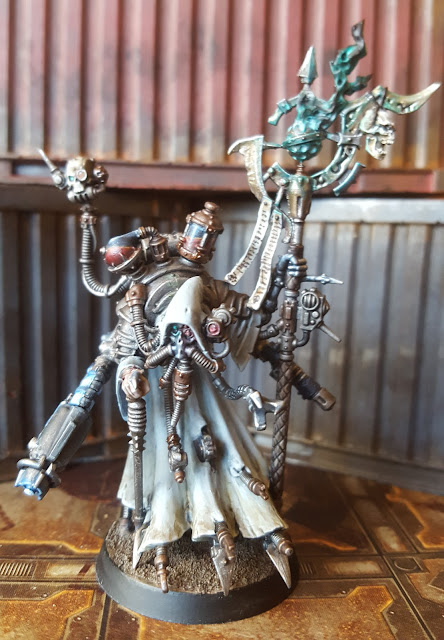 Greetings Sinners.....and Happy New Year to you all.
I was hoping to get a fair bit of painting in over the Christmas period but as some of you may know I only paint using daylight and the good 'ol British weather has seen fit to grant me very little of that over the past couple of weeks.....roll on Ostara!
I have however, managed to get our adversary in the Cruelwater Chronicles painted up and ready for action. So here he is: Renegade Dominus Kaius Torq....better known to the inhabitants of Rockridge as the Puppet Master.


The Adeptus Mechanicus models immediately made an impression on me from day one of their release. But back then I was concentrating exclusively on 40k and the thought of building yet another army when the armies I already had needed to be updated put me off.
Fast forward a few years and the Necromunda rule-set lets me explore all that the 40k universe has to offer thanks to the Venator rules.
Initially the Puppet Master was created for our latest adventure in Rockridge but I now have plans to use him as the leader for a Dark Mechanicum warband.....now admittedly I have lots of plans and not all of them come to fruition, but I have all of the models to create this 'gang' and even a capricious hobbyist like me should be able to focus long enough to complete 8 to 10 models.....right? 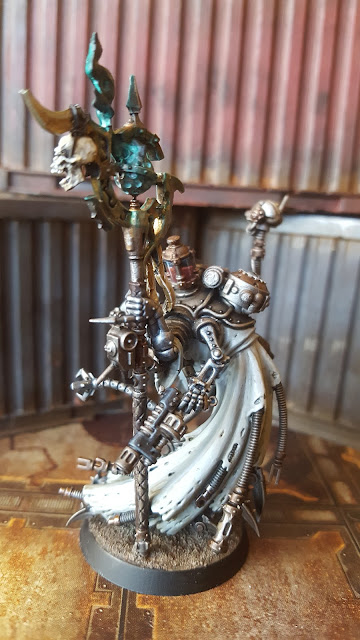 Of course not every weapon from the battlefields of 40k have rules in Necromunda (which is one of the things I like about 'Munda. I mean who wants to see Assault Cannons deleting entire gangs and what not?). I have no idea what weapons a Dominus is armed with on the 40k battlefield but I know what I wanted mine to be armed with in the Underhive. For a side arm I equipped him with an Autopistol which offers some offence should he be unfortunate enough to find himself in combat or if his main weapon runs out of ammo. 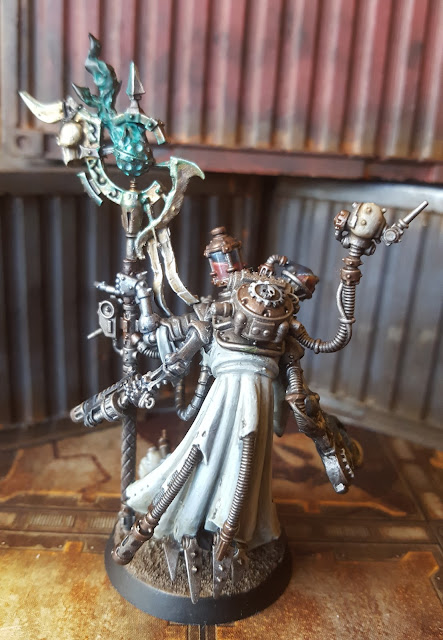 The staff with the glowing orb (known as the Empyreasphere) will represent a Conversion Field. 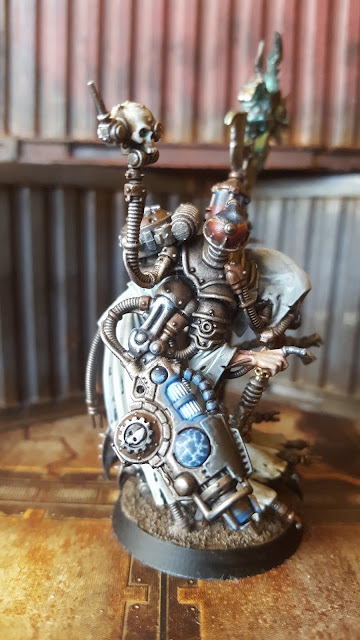 His main weapon is a Rad Cannon which is Unwieldly and takes up two weapon choices. Unlike normal gangs, a Venator can take up to 5 weapon options instead of the usual 3. 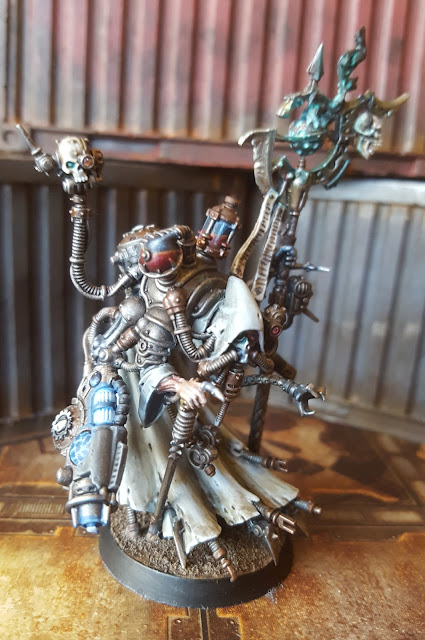 To complete his armament is his trusty cane. This will represent a Shock Stave (hit rolls of 6 automatically wound).

I had a lot of fun painting him. The Dominus model is great miniature and as tempting as it was to go wild converting him, I kept it to a minimum because of time constraints but much more importantly, I really like the original model.


The diagnostics confirmed that his sensors were working perfectly. The Empyreasphere registered no heat, no movement and no sound, it registered inert.
Perhaps his sensors were incapable of differentiating between the Empyreasphere's hum and the man's screams? He made a mental note to remove the vocal cords from the next test subject to eliminate any possibility.
He checked the sensors again. They registered that the man's body was being drained and his flesh subjected to intense heat but still they didn't register any source.
He held his one living hand to the plasti-glass to confirm what his sensors failed to verify. The warmth of the glass confounded him, doubt flashed through his organic brain and he quickly snatched his hand back. His mind screamed out as long forgotten emotions surfaced and his augmetics swiftly pumped suppressants through his system in an attempt to quell the turmoil. The doubt gave way to a sense of loss which in turn was swamped by fear. His brain screamed against its confinement and its claustrophobic environment. He reached up to his face-plate and disengaged the locking mechanism that held it in place, carefully revealing what was left of his face. Blinding light flooded his one remaining organic eye; an affectation from the past that circumstance had prevented him from rectifying. Chemicals soothed his optical nerves as his augmetics responded to the unexpected light allowing him to see from something he hadn't used in years. It was a curious sensation, his optical sensors still registered the object to be inert but his organic eye told him the complete opposite.
The Empyreasphere was spinning, he checked all of his sensors again and they registered nothing, the light that it emitted bathed his laboratory in a cold jade glow that seemed at odds with the heat he felt upon his face. His fear had subsided; the suppressants had finally taken effect he thought, but he soon realised it had simply been replaced by awe and wonderment.
He watched as the man's skin began to blister, his screams turning to shrieks of agony as the cold fire, because that is how he thought of it, ate into the subject's flesh and his body withered to a dried husk.
"The flesh is no substitute for the machine" he mused.
"But you cannot witness this without the flesh" replied a voice from the back of his mind.
The light diminished to a barely noticeable glow and the orb at the centre of the Empyreasphere came to rest.
So it is flesh that drives this infernal device, he thought to himself as he carefully reattached his face-plate. His doubt slowly submerged beneath his rising curiosity.
Fortunately, the Underhive is infested with it!
If he'd still had a mouth, the Dominus would have smiled...