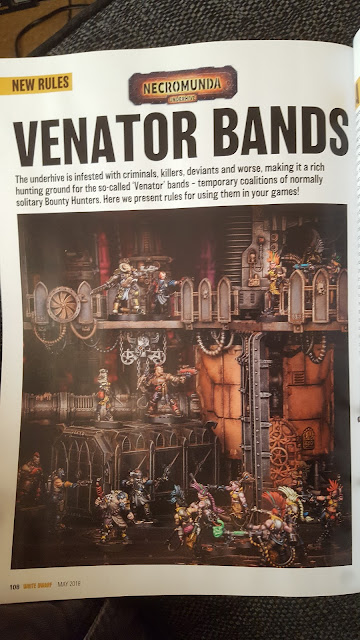 Greetings Sinners!
This month's White Dwarf has dropped through my letter box and within its pages are the rules for Necromunda Venator Bands. You may be wondering what in the name of the six hells of Slaanesh is a Venator Band?
A Venator Band is a Necromunda gang made up of Bounty Hunters to hunt down all those Spook addled sump scum that defy the Emperor's will. All well and good you may say, so what's the big deal?
Ah, here's the thing. The rules have been designed to allow players to create a small (but perfectly formed) gang of roving Ashers, a band of Inquisitorial agents, a mercenary group of Aliens or anything else that your imagination can think of!


Designer's Notes
"Venator Bands present an opportunity to let your gaming imagination run wild, a chance to use the Forge World Bounty Hunters in conjunction with a wide variety of models from the plastic gang sets and create a gang with a character all of its own. The gang list presents a wide variety of profiles for each character type available, together with unprecedented access to a wide range of equipment thanks to them using almost the entire Trading Post as their equipment list. The options are almost limitless.

This is deliberate. Venators come from not only all corners of Necromunda, but from all corners of the Imperium and beyond. They are bands of bounty hunters thrown together by the knowledge that working in a group is far safer and more profitable in the long run than working alone. Former gang members, deserter guardsmen, abhumans, even aliens, all can be brought together with this unique gang, and over time just like any other gang, it can become even more diverse and colourful through the addition of Hangers-on in the form of supporting staff, Exotic Beasts and so forth."

The possibilities are endless and I feel that Andy Hoare, JTY and the rest of the design team have really smashed it with these rules......the Faerytale in the Grimdark is still alive and kicking!