The Caledonian Uprising draws closer...and a second attempt at the Rapier Weapon Carrier

The 40k hobby has really exploded for me in the last couple of weeks. My Noise Marines call to me....listen to the children of Slaanesh, what sweet music they make! The Path to Glory: Call of Chaos haunts my dreams, luring me down the dark, twisted paths of my imagination and seducing me with thoughts of eternal glory. As if that wasn't enough, the tournament Caledonian Uprising is fast approaching, so once again it's time to prioritise this wonderful hobby. 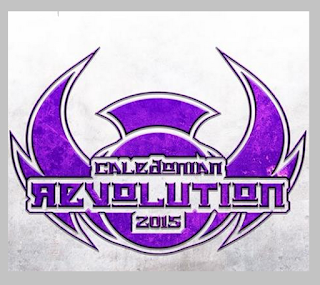 The Caledonian Uprising is, without a doubt, the largest gathering of 40k gamers in the UK. This year (actually it's next year....oops) 180 gamers will battle it out over the weekend of January 15/16th at the North West Gaming Centre in Stockport. To cater for everybody's tastes the event organiser, Tim, has split the event into three categories.

Uprising Battleforged - 1850pts, anything goes (within the rules), straight out of the books with no comp.

Uprising Highlander - 1500pts, single detachment, there can be only one (no duplication).

The Caledonian Uprising has always been a hardcore event. Originally it was devised by Tim & company as a practice event for ETC (European Team Championships) players to hone their skills and help fund Team Scotlands exploits at the ETC. The event has since evolved into one of the premier tournaments in the UK and as such, attracts some pretty tasty armies.
Personally, I've always preferred Highlander events, the games tend to be a bit more laid back and experience has shown me that Highlander armies have the largest variety of units, so naturally, I've entered Uprising Highlander.....Slaanesh in her wisdom, loves variety!
Of course, being Cally, I still expect those armies to be more than capable of smashing a fluffy Slaanesh army into tiny pieces, so I shall once again be turning to the Castigators 2nd Cohort to further their cause.
Although the Highlander event doesn't allow allies (so no daemonic help this time around) it does allow a Lord of War to be taken up to 489pts (so no Silken Scorpion this time around). Forge World is allowed and Tim has allowed the experimental Chaos Knight rules to be used :-) 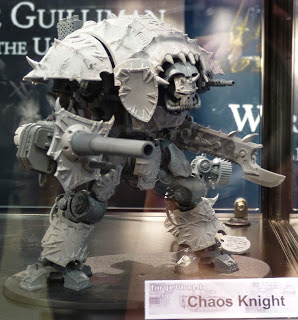 The deadline for army lists is rapidly approaching (December 19th, for those going), so last night I designed something that I think will give me a fighting chance against all those Eldar, Necron and Tau armies that are sure to be there.

I'm hoping this will have enough synergy to deal with most things. With no Sorceror, invisible units will be a problem, but hey, I can't cover every base, especially at 1500pts.
There is one slight problem however, mainly that I have to build and paint a Chaos Knight......not to mention that I don't actually own two Rapier Weapon Carriers or a Warpsmith (although I'm sure I'll be able to convert one). So it looks like I have plenty to keep me busy over the Chrimble holidays!

Fortunately, I do have these.... 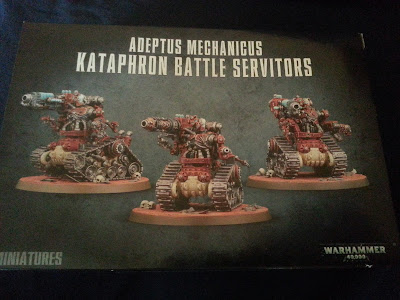 I bought these a while ago specifically to convert into Rapier Weapon Carriers. It's such a nice kit that I briefly toyed with building a Dark Mechanicus Army, but then thought better of it.....I have enough to do without starting another army!

The main thing that I needed was the tracks and these are perfect for my needs.... 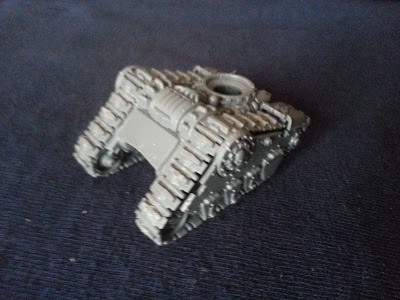 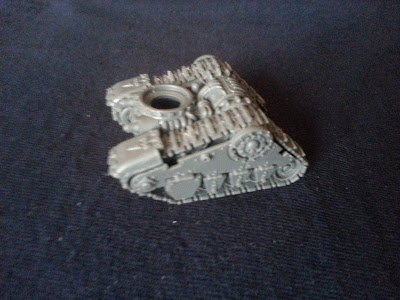 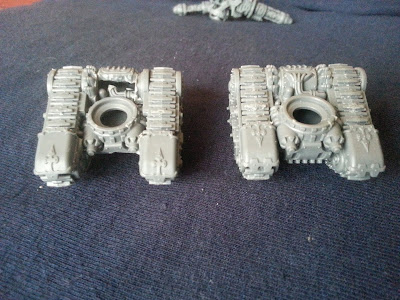 Once the weapon mount is fitted the gap where it has been cut up will be covered, so there will be no need to fill it.
For the weapon, I rummaged through my bits boxes and found the Forge Fiend weapons left over from my Maulerfiend. I removed the Hades Autocannon barrels and replaced them with the heavy Grav Cannon barrel that comes with the kit. 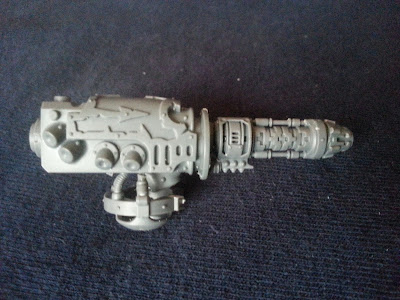 I'll probably stick something on the end just to make it look a bit more like a Conversion Beamer, but this a Cyclotrathe Conversion Beamer, so who's to say what it should look like compared to a regular Conversion Beamer? ;-)
This is the view from the other side, I used the Kataphron Servitor harness, I just cut the weapon brace off and turned it around so that it would fit in the hole of the Forge Fiend weapon casing. 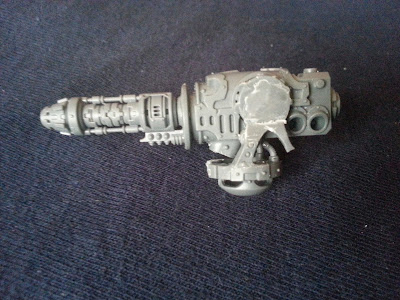 Obviously this is still in the rough stage. I plan on tidying it up a bit and adding some cabling, but you get the idea. Here's an WIP of how they look. 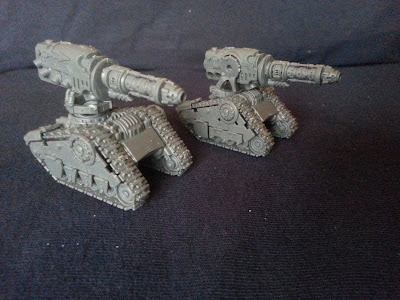 I need to rummage through my bits boxes again to find something I can use as a front plate and find a control mechanism for the rear. I think chopping up the top plate was worth the effort as the proportion of the Rapier at the back looks better IMO. 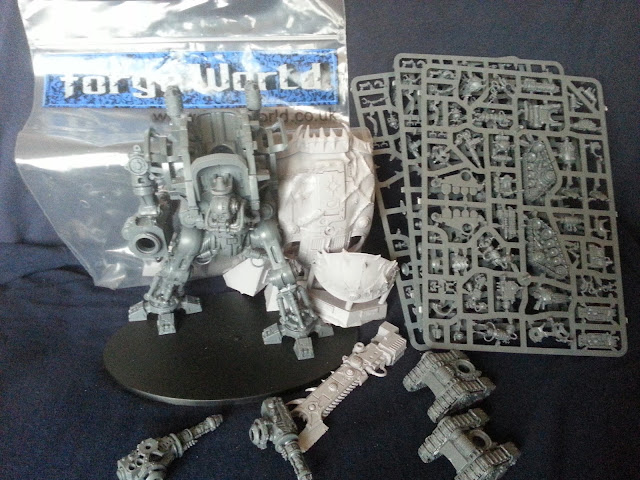 I decided that the Rapiers were a bit too tall, so I've chopped them up again and made a few adjustments. There still at the early WIP stage but I prefer the lower profile. 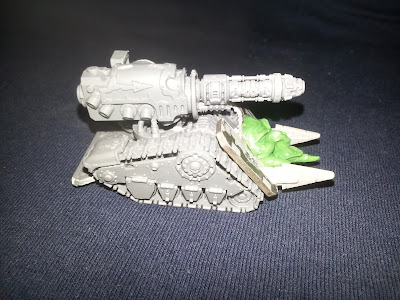 The front plate is just held on with Blu-Tac at the moment, but it gives a rough idea of what it will look like. 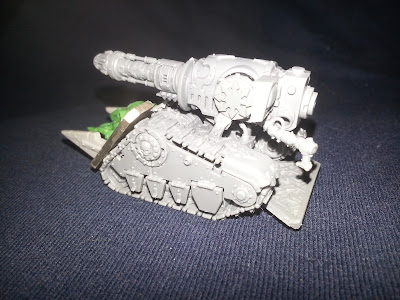 I decided to use one of the spare arms that comes in the Kataphron kit as a trigger handle to control the weapon..... 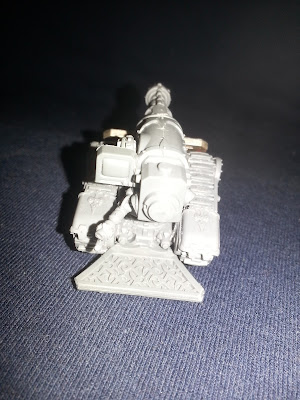 .......and fitted a targeting monitor to the weapon as well as a firing platform.

Until next time.....may Our Lady grant you her number!
Posted by Castigator at 09:12