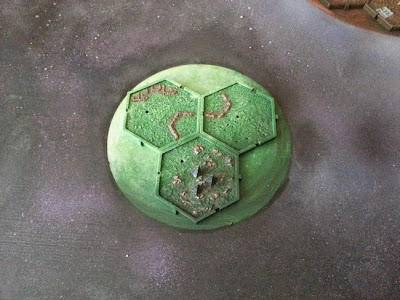 
Rob and I got together for a long overdue game and decided to have a practice game for the Southern Invitational in just over a weeks time. I used my list I talked about here, while Rob used some newly recruited Daemons with his Death Guard.
Death Guard
Festus, Nurgle Lord, Bike, Fist, Burning Brand.
7 Bikers of Nurgle, 2 Plasma Guns led by the infamous Tosis Mire!
7 Plague Marines, 2 Meltas. Rhino.
10 Cultists, MoN.
Heldrake.
Maulerfiend.
7 Nurgle Havocs, 4 Autocannons.
3 Nurgle Obliterators.
Herald of Nurgle.
3 Nurglings
Soul Grinder of Nurgle.

We rolled up Maelstrom: Cleanse and Control (3 objective cards each) and Rob deployed first in the North-East. 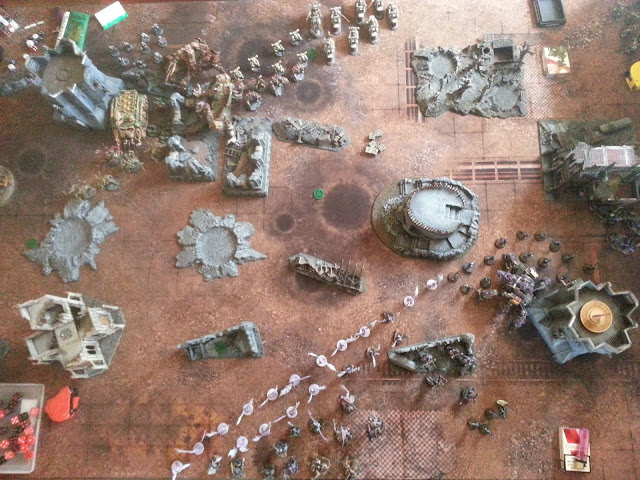 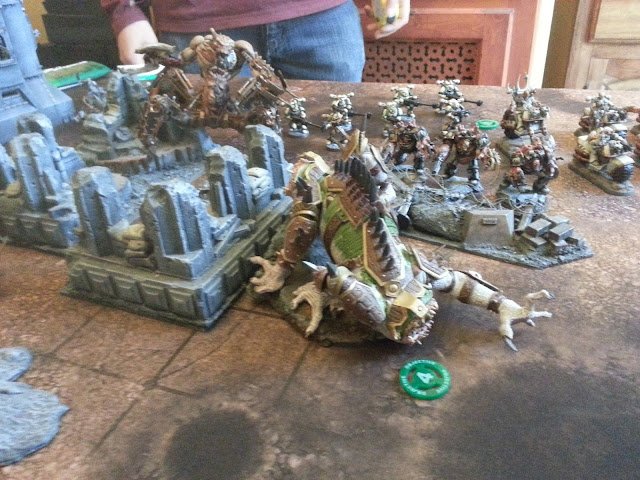 The Death Guard played it cagey and shuffled forward with their Maulerfiend out in front. Shooting saw four Daemonettes and 2 Furies taken out. 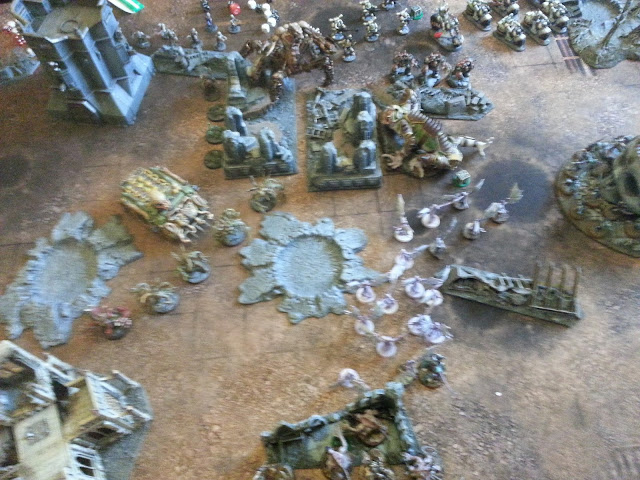 The Castigators were similarly cagey.....except for the Furies of Slaanesh which surprised the Death Guard with their Speed..... 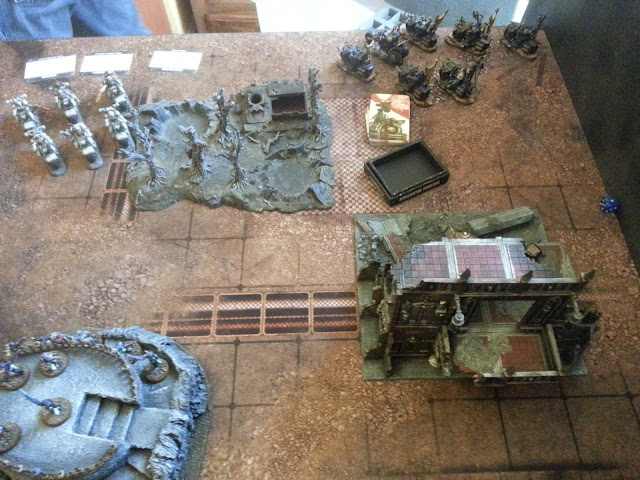 ......and Nestor and his Bikers that turbo'd up the right flank. The Blastmasters opened up on the Nurgle bikers, killing one and putting a wound on the Plague Lord Festus. The Furies and Slaanesh Herald charged the Nurgle Maulerfiend, penetrating it 5 times! Unfortunately the resulting explosion killed 8 of the Furies! 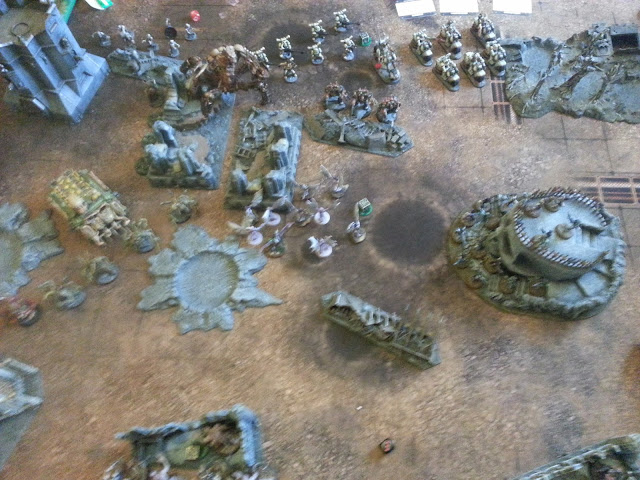 Turn 2
The Death Guard struck back with the ferocity of a wounded bear. The Plague Marines disembarked from their Rhino and killed several Slaanesh Furies, with their Plague Brothers, the Havocs finishing off the rest. Festus and his Bikers ignored the Slaanesh Lord and headed over to the Daemonettes dancing on the Chaos Shrine, gunning several down with help from the Nurgle Grinder and the Obliterators. The few left were quickly dispatched by the Nurgle Lord and his bikers. The Nurgle Spawn charged their Slaanesh counterparts skulking in the ruins losing one of their number for their troubles!
With the trap sprung, the Castigators hit back.The Slaanesh Heldrake turned up and toasted 4 of the Plague Havocs, who promptly legged it from the battlefield still burning! The battle of the Spawn continued with both sides giving as good as they got. The Noise Marines levelled their Blastmaster at the disembarked Plague Marines and killed 5 of them.The other squad of Noise Marines took a fearsome toll upon Festus and his Bikers, killing two and inflicting another wound on the Nurgle Lord.  The Slaanesh Grinder (which looks suspiciously like a Defiler) killed another..... 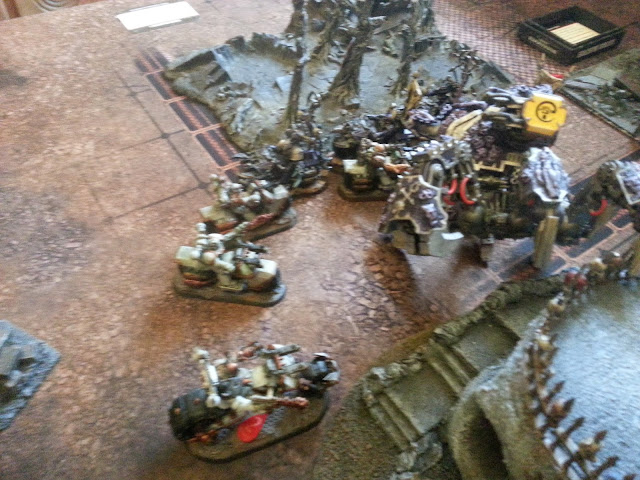 ......before charging in with Nestor and his bikers. The Aspiring Champion, Korath challenged and Tosis Mire readily accepted..... 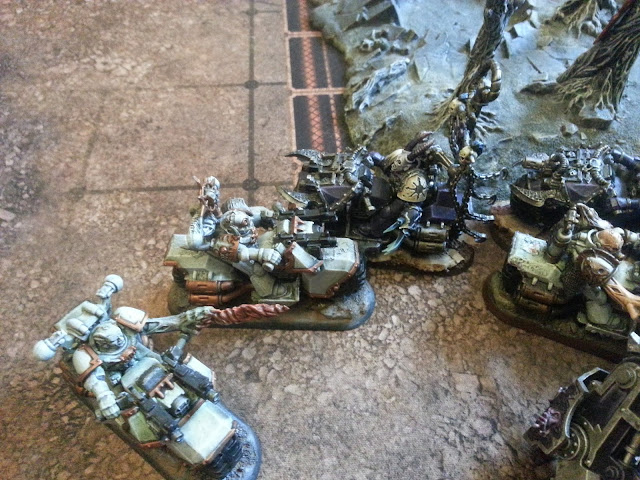 .....unfortunately for Tosis, he should have left it to his Lord, as Korath smashed him to the ground. Not that Festus faired any better as Nestor and the rest of the bikers wiped the squad out. 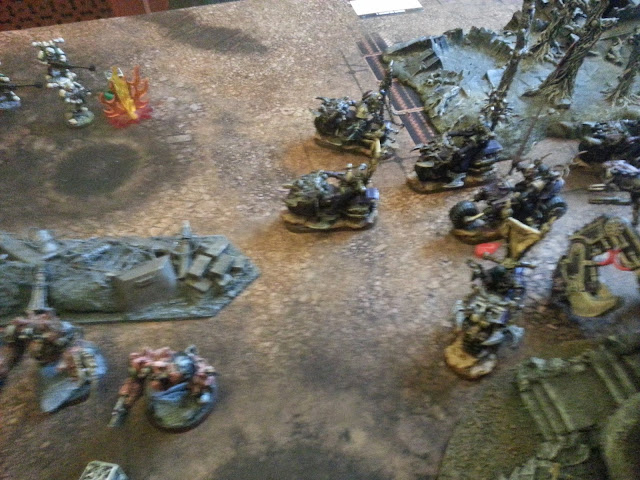 Turn 3
The Death Guard were trailing on objectives and their left flank had disintegrated so they were mightily relieved when their Heldrake showed up. The Heldrake roasted three of the Slaanesh Bikers and put a wound on Nestor. Things could have been worse for the Slaanesh Lord as the Obliterators opened up with twin linked Plasma Guns, but thanks to Nestor's Warlord trait of Shrouded only one wound got through Nestor's armour. 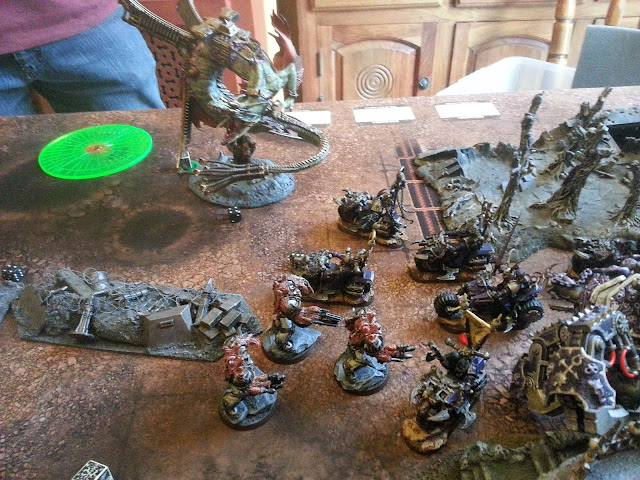 The Spawn continued their spawn off with both units badly mauled. 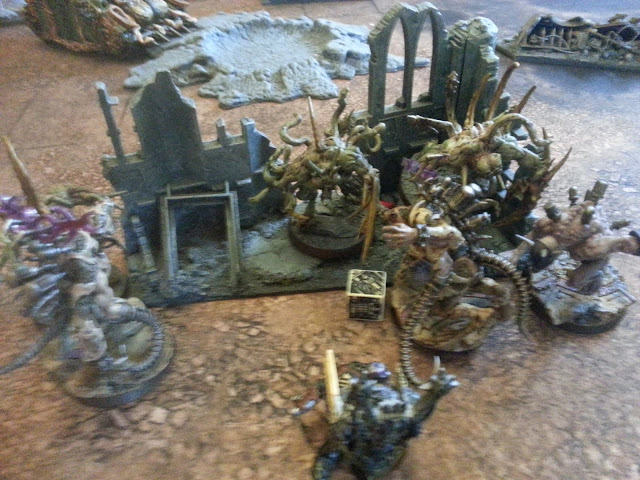 The Obliterators charged into the much depleted Biker Squad, losing two of their number but reducing the Slaanesh squad to Nestor and the biker champion. 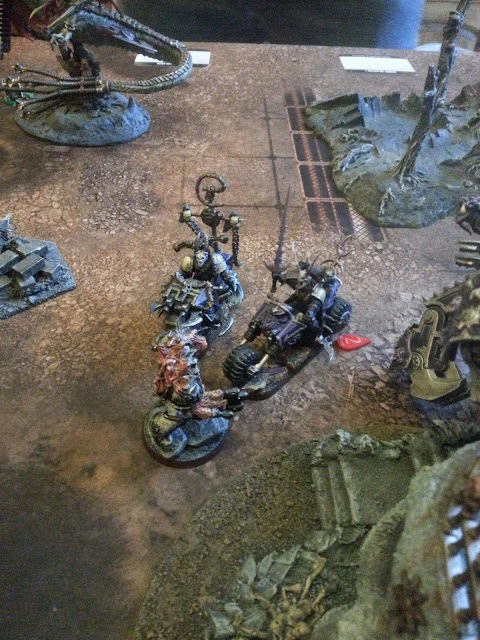 The Castigators' Fire Raptor arrived wrecking the Plague Marines' Rhino and stripping a Hull Point from the Nurgle Heldrake..... 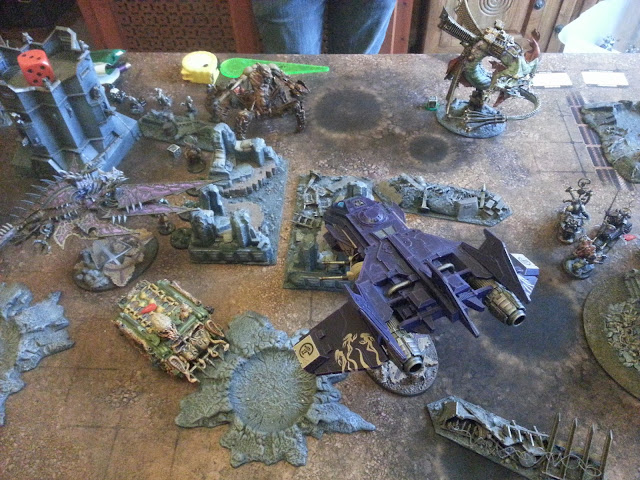 .....the Slaanesh Heldrake Vectored the Nurgle drake to strip another hull point. The Slaanesh Soul Grinder tore up the lone Obliterator freeing Nestor and his Biker buddy from a combat they'd rather not be in. To add insult to injury Nestor pulled a wound back. 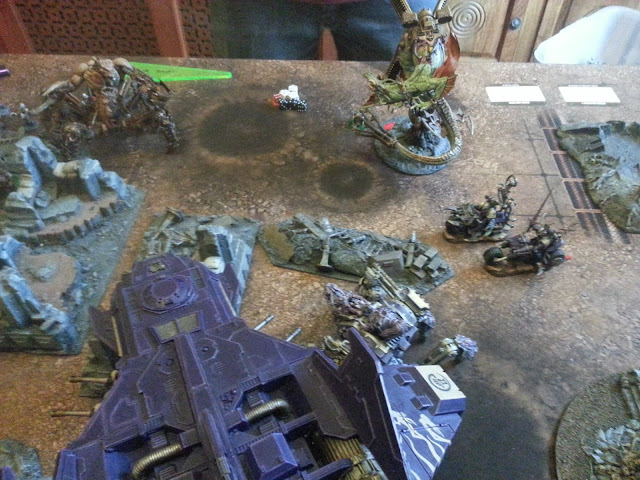 The Slaanesh Spawn tore into their Nurgle counterparts, leaving two with one wound each. 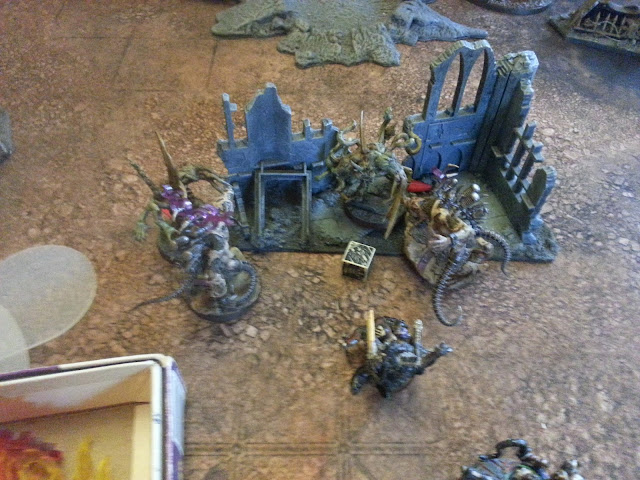 Turn 4
The Death Guard were dwindling rapidly. The Nurgle Heldrake flew over to the Noise Marines and roasted 3. The Two remaining Plague Marines moved into the open to target the Fire Raptor but failed to hit it. The Nurgle Grinder shot at Nestor with everything it had but thanks to jink and Shrouding only the Biker Champion succumbed to it's attentions. The Nurgle Spawn lost its battle against the Castigators' Spawn to leave the Death Guard with very few forces left. The Nurgle drake flushed with success restored a hull point. 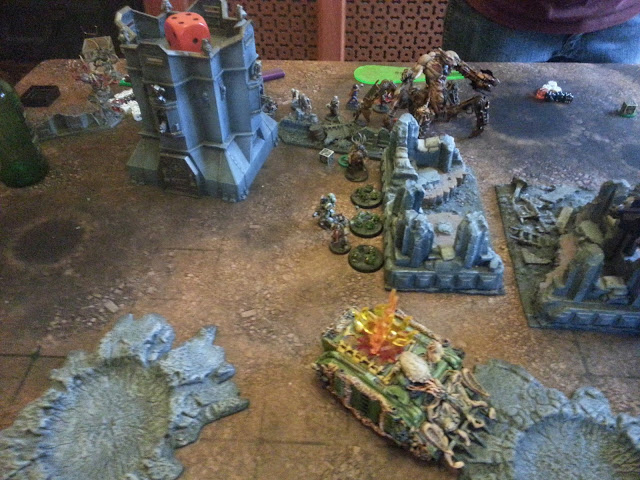 The Slaanesh Heldrake vectored the Nurgle drake, stripping it of it's last two hull points and sending it crashing to the ground. Not content with this it roasted some 4 of the Nurgle cultists skulking on an objective. The Fire Raptor targeted the Nurgle Grinder along with the Noise Marines and stripped two Hull Points from it. The Slaanesh Spawn moved over towards the Plague Marines and Nestor joined them, charging head long into the Plague Marines..... 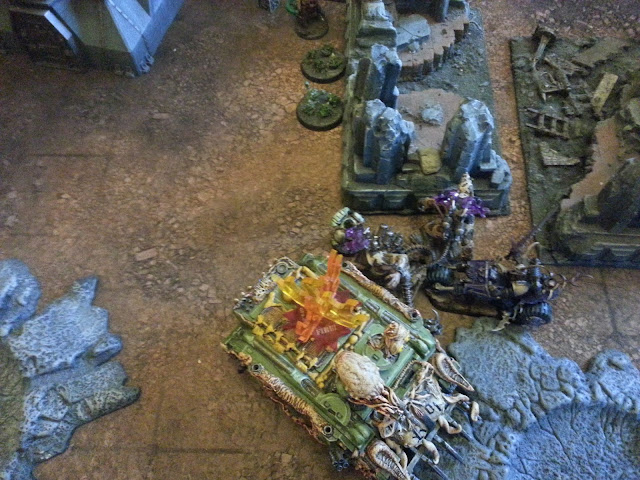 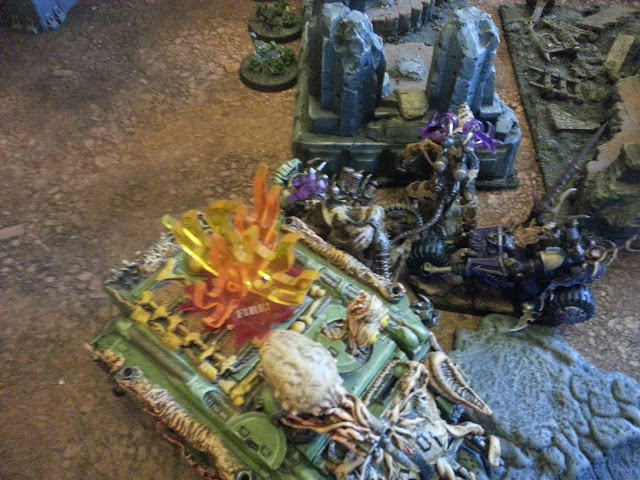 Turn 5
With very little left Rob attempted to charge my Slaanesh Grinder with his Nurgle Grinder but failed to make the charge (even though he only needed a 4!). His Nurglings and Herald moved into the ruins to give them cover from the inevitable charge. The Cultists scurried over to an objective to put the score 13-4 to the Castigators. The Nurgle Grinder restored a Hull Point.
The Slaanesh Heldrake flew over to the Nurgle Cultists and fried them leaving four left. The Noise Marines, Fire Raptor and Slaanesh Soul Grinder stripped a Hull point from the Nurgle Grinder leaving it on one hull point. The Slaanesh Grinder charged in wrecking it for the loss of a hull Point. Nestor and his entourage of Spawn charged into the Herald and Nurglings...... 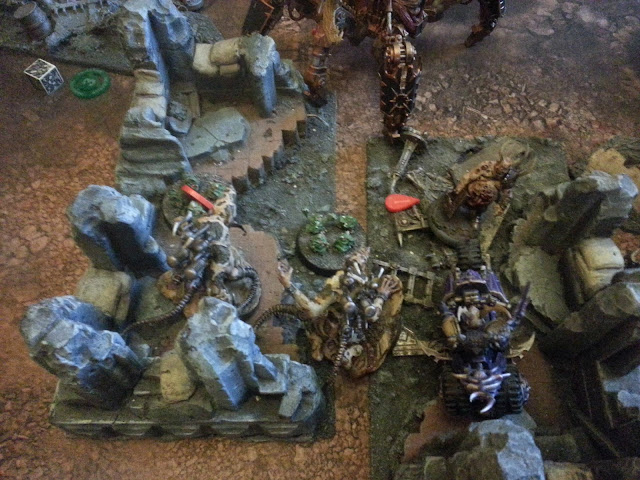 .....Nestor struck first, tearing a wound into the pestilent Herald, The Nurglings struck before the Spawn thanks to being in cover, and promptly wiped them out! To add insult to injury, the Herald managed to put a wound on Nestor, who then failed his 2+ save.....Oh the shame, the mighty Nestor had fallen to Nurglings! 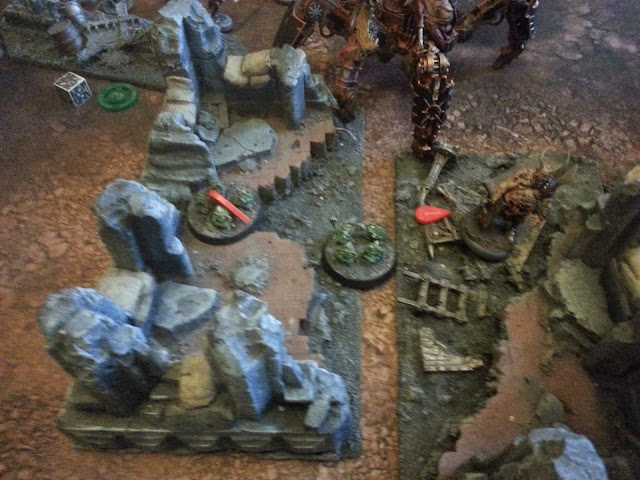 Turn 6
Rob's Cultists scurried over to the Soul Grinder in an attempt to hold it up, but they couldn't reach it in time. The Soul Grinder hurtled in to the Herald and Nurglings determined to reclaim the prone body of Nestor, crushing two of the Nurgling swarms underfoot. Rob lost the combat by 6 and then promptly rolled snake eyes for the damned things to reappear! We rolled for another turn and the game ended. 13-5 to the Castigators. 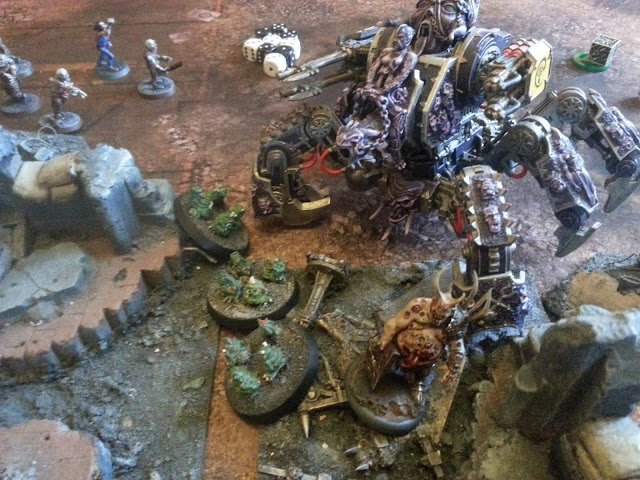 I rolled on the Conquest table needing a 4+ on 2d6 to claim a territory...and rolled a 3! Curses, foiled by a bunch of pipsqueak Nurglings!

Nestor slowly opened his eyes. All around him was bedlam.The staccato bark of gunfire and squealing could be heard outside of the base.
"Sit-rep now!" he demanded rising from the bed.
"The Death Guard have retreated in total disarray, my Lord" said the Flesh-Smith uneasily.
"Excellent, then we have secured another territory, we can now pu...."
"I'm afraid not sire"
"What!" screamed Nestor "Why in the six hells not?"
"Nurglings, my Lord. The battlefield is over-run with them. We're struggling just to hold the position we have, until reinforcements arrive."
Nestor fell back onto the bed screaming in frustration. "Damn those pox riddled flea bitten sump crawlers!"
Calm slowly replaced the rage that coursed through his body.
"Flesh-Smith!" growled Nestor.
" Yes my Lord?"
"Run me a bath, I stink."
Posted by Castigator at 07:47